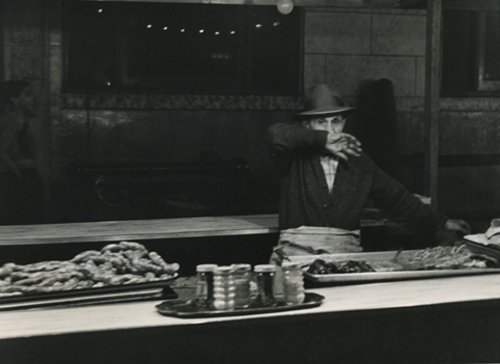 Frank's finally out of the shadows

An aptly titled book because Frank Paulin is hardly a well known name in the American photographic arena. The photos in the book have been hidden away for years. Exhibitions in 1957 and in 2003 more or less sum up Paulin's exposure until this book came out in 2007.

New York, more than any other city, has attracted photographers to capture the daily to and fro of street life. Frank Paulin became a street snapper outside of his professional photographic work (much like Vivian Cherry, originally a Broadway dancer, who has some vibrant city work in Helluva Town: New York City in the 1940s and 50s) Paulin has some stunning photos in his book with the first one a knockout street shot from 1956, showing milling pedestrians across the bottom of the photo and four giant billboards above them, or page sixty-three, taken Battery Park in 1955 with two lovers kissing on a park bench and an old gent oblivious to them just looking at the camera.

There are other wonderful photos but I was rather disappointed to find several that really seemed not much better than average and this perhaps is the problem with the book. Photos that really pull you into the frame are mixed with the also rans. The way the book has been designed doesn't help either. There is far too much white space, either blank pages or a spread with a photo occupying only a quarter of it. The eighty-nine photos are spread out to fill the book's 176 pages.

I think the book is rather over designed despite a pleasing landscape format, good paper and 175 screen printing. Even a trifle like the page number position has had some design input. Left-hand pages have the number bottom left, except when a photo is on that page, right-hand pages have the number bottom centered except when there is a photo on the page and bizarrely there are five right-hand pages with small photos where the page numbers are positioned near the spine of the book. All designer whimsy off course because there is no need for this confusion.

I think the book is worth getting if you can find it at a much lower price than currently available.

One of the great shots in the book and first one you'll see. Beautifully framed and full of detail.

I wonder why this shot was included? Cut off feet, part of a person on the left and another figure top left all makes for a confusing compostion.