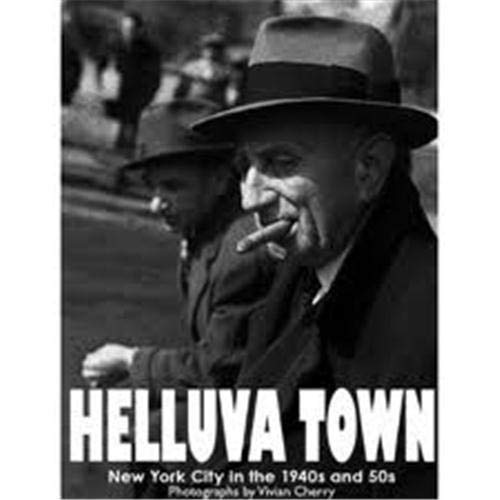 The Cherry on top

Ms Cherry, trained as a dancer, got her start with the classes organized by the Photo League in the early forties and she is one of several female photographers who absorbed the teachings of Sid Grossman. Others include Lisette Model, Helen Gee and Erika Stone. She is probably the last surviving member of the League and amazingly still covering NYC with her camera.

This is the first of two PowerHouse books, the other (forthcoming) one is Vivian Cherry's New York, with photos from the last decade or so. Her style is typical New York School: capturing the passing street scene in the same way as Arbus, Donaghty, Frank, Klein, Levitt, Weegee and a handful of others.

The eighty duotones are divided into: Third Avenue El, passengers and its removal; Blacksmiths; Bowls; Fruit auctions; Lower East side; Children. One of the editorial problems with the book, I think, is that there are too few photos in some of these chapters, for instance blacksmiths only has six, bowls five, fruit auctions nine and East side twelve. These hardly seem enough for an essay on the subject and surely Cherry must have taken more. The El and its removal has twenty shots including some wonderful compositions of passengers and spectators.

One of the stylistic features of the Photo League was seeking out the spontaneous shot of some activity on the street, the complete opposite of the controlled posed photo but I was struck by a couple in the book that seemed posed (still wonderful photos, though) one on page twenty-one is of three identical looking men, all wearing hats sitting in three separate seats on one side of a subway car, the other, page ninety-one, is of a group of seven kids, all holding bits of wood as make believe swords resting on friend laying on the ground.

PowerHouse books have a reputation of producing quality photo books and Helluva Town maintains it with good paper and lovely solid black 200 screen duotones. I wonder though if their two books on Cherry would have been better as one big book? A sort of thick, chunky monograph to give Vivian Cherry the credence she deserves.

Title spread with a wonderful photo of some cattle on the sidewalks of New York.

Each of the six essays start with a short intro.