Here's the Neponset flex nib fountain pen from Noodlers, the same brand that brought you the Ahab and Konrad flex pens and of course the Noodler's Bulletproof black ink.

The Neponset is the high-end pen from Noodlers.

This pen comes in a huge variety of colours. So far I've counted 18. Most designs look like some sort of marble pattern but are in fact made of acrylic resin. I thought it would be cheesy looking but now that I have one in hand, it looks quite good. The pen shimmers as you turn it around.

Many people complain about the smell of the Ahab and Konrad pens and I'm glad to report that this pen does not smell as bad. But if you open up the body, then the smell comes out. I think it's the material that's used to make the transparent ink reservoir and that really smells bad. 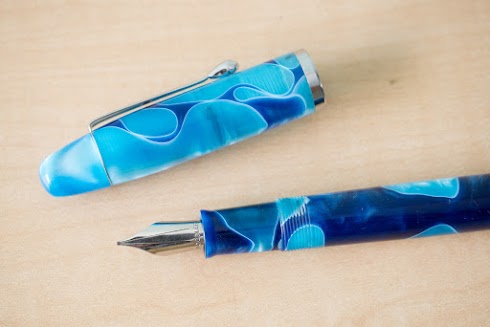 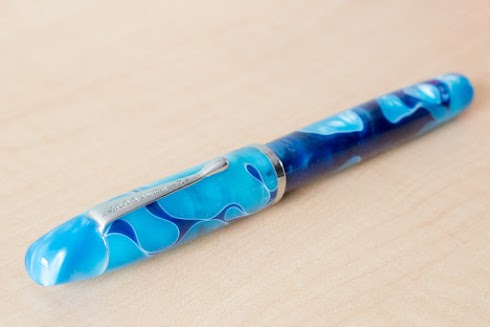 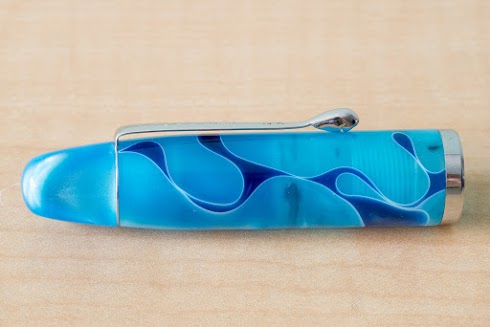 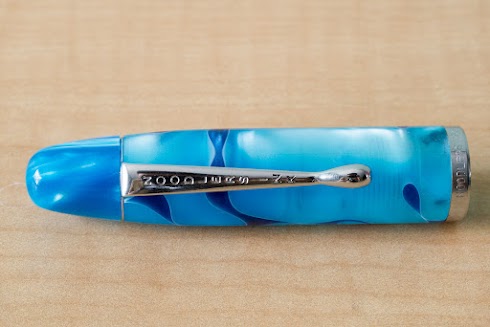 The top and bottom are rounded off. The clip doesn't look nice. The overall design is inspired by an airship. There's actually a whole lot of marketing speak on the product page but I've decided to spare you the story.

The Neponset is a big pen but it feels light. With the cap on, it measures 15.3cm, and without the cap it's 13.3cm. The cap's the screw-on type. 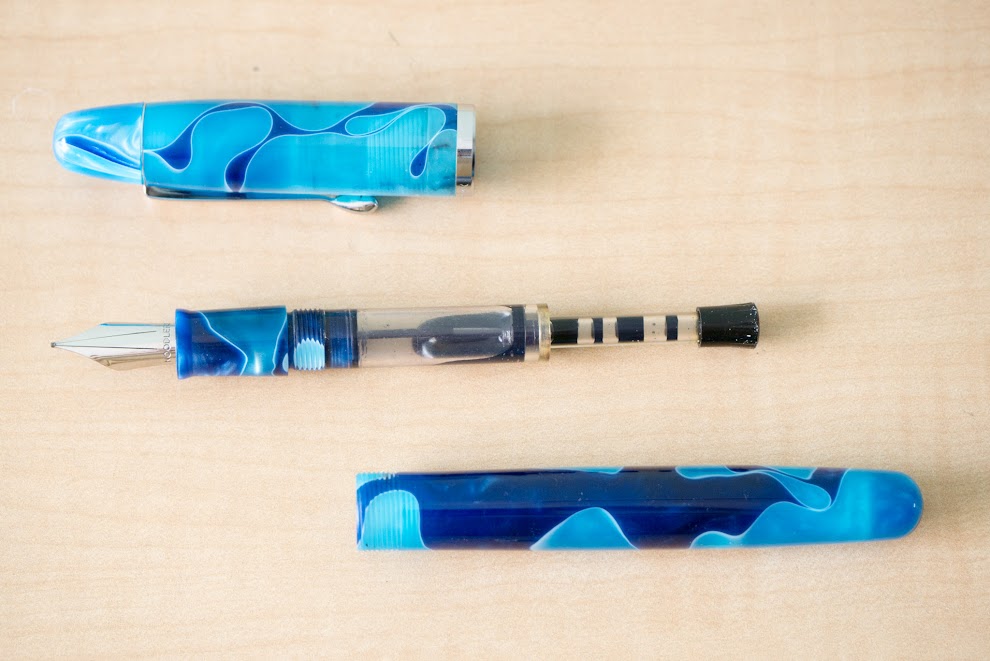 You can unscrew the body to reveal the refilling mechanism: a piston filler with the ink reservoir attached to the grip section. For this piston, it has a plunger so you can refill it quickly by pushing and pulling the knob. The ink capacity is huge which is great because this pen produces very wet lines and uses a lot of ink.

The highlight of the pen is the three tines design of the nib. The two slits are cut quite far back from the tip to the back. The nib feels stiff but it does have a tiny bit of flex as you apply pressure. My pen has the tines cut perfectly and the strokes come out beautifully. I'm not sure what metal was used to make the nib, probably steel. On a scale of 1-10 where 10 is the most flexible, I would say it's a 3-4 for the Neponset. 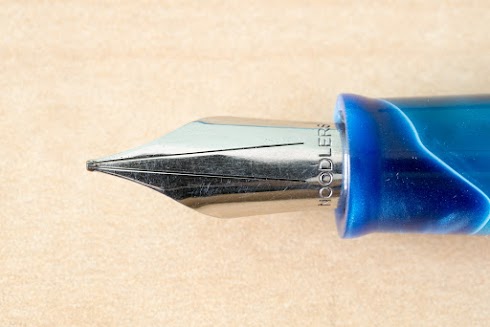 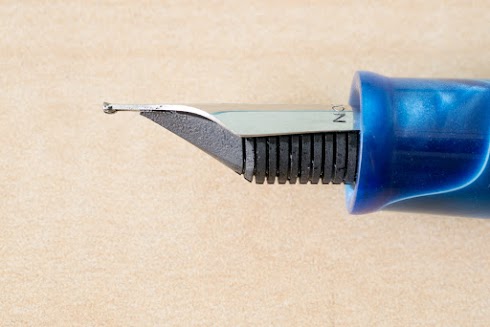 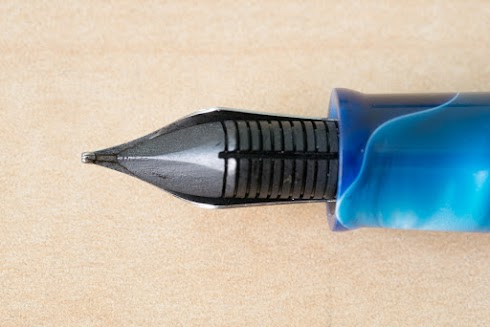 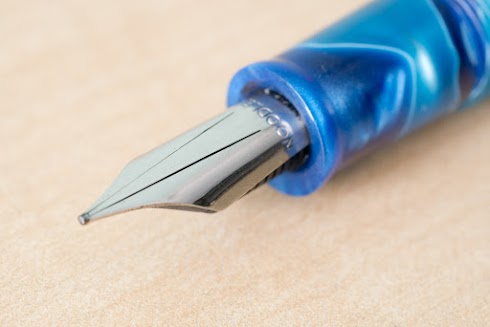 The strokes are very wet so you've to be careful to make sure the ink is dry before scanning or applying watercolours.

Ink flow is fantastic and no matter how fast you draw the ink will keep flowing. It's a good thing the ink reservoir is quite big.

Writing performance is good. It's smooth but there's some tactile feel to it. The lines have sharp edges, even on rough paper, which I think is because of the wonderful ink flow. 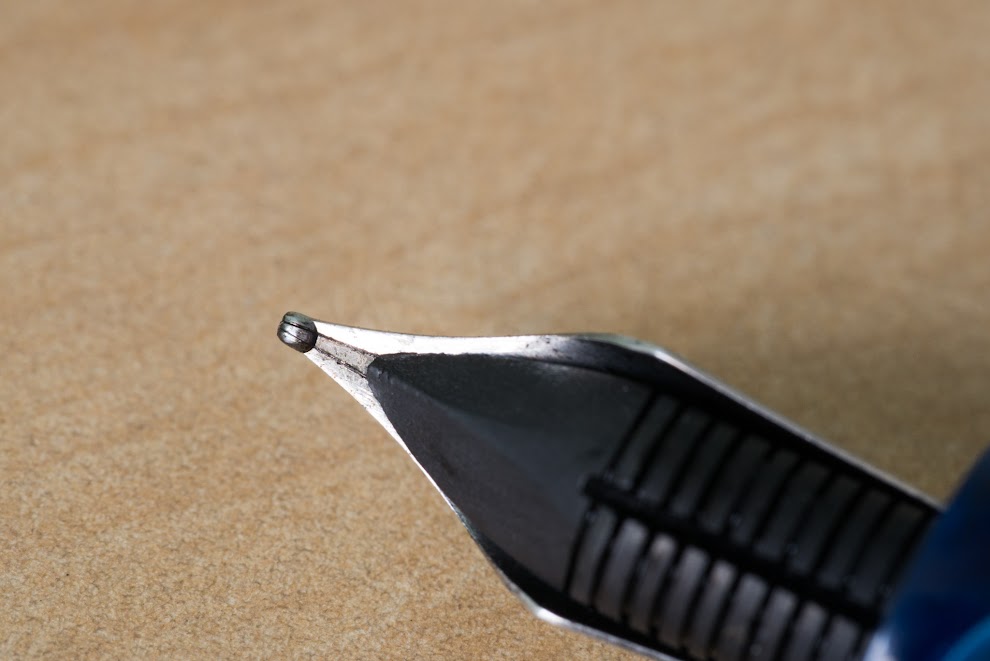 There's only one size to the nib. Under normal pressure, the strokes look like a medium, maybe 0.7, to me. When pressure is applied, the strokes become broad, about 1mm.

One thing to note, when drawing fast, the tines will throw out tiny spots of ink. That happened on smooth paper so on rough paper it's worse. But under normal conditions, the tiny ink spots splattering is not going to happen.

Here are some sketches with the pen.

The pen is pleasant to use and draw with. I like that it's light even though it looks heavy. The only issue I have is probably the large size of the pen. It feels a bit too big for me, for my small hands. Maybe Noodlers should make a smaller pen.

The retail price is USD $75. I think it's worth the money but somehow I feel that it can still be cheaper.

If you're looking for a good flex pen, I'm not sure if the Neponset would satisfy your criteria. The strokes vary from 0.7 to 1mm. If you're not a fan of Medium nibs, then this probably won't be your pen.

If you have more budget, at just above $100, you can get the very good Pilot Namiki Falcon and Pelikan M200 which I think are both slightly more flexible than the Neponset and can give better line variation.

You can find the Noodler's Neponset and its many different coloured models on Amazon:
Amazon.com