The Noodler's Ahab is a pen that many users have a love-hate relationship with.

I've read a lot about the pen and finally decided to get one to see what the fuss was about. Thankfully, this pen is not too expensive and cost around $20-30 depending on the colour and seller. 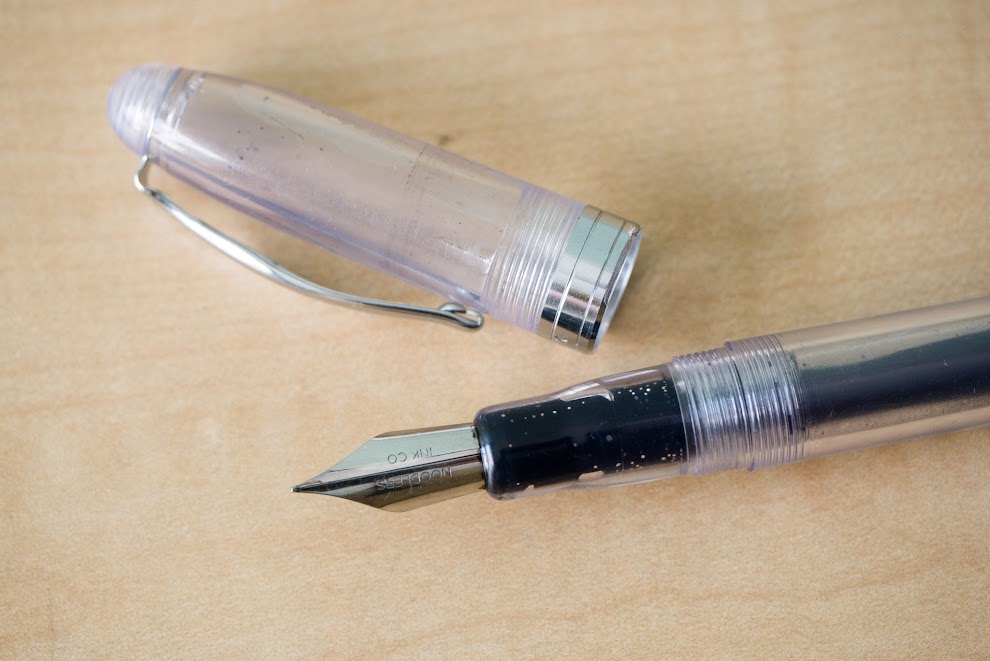 The overall design looks and feels cheap. Well, it's a cheap pen to begin with. 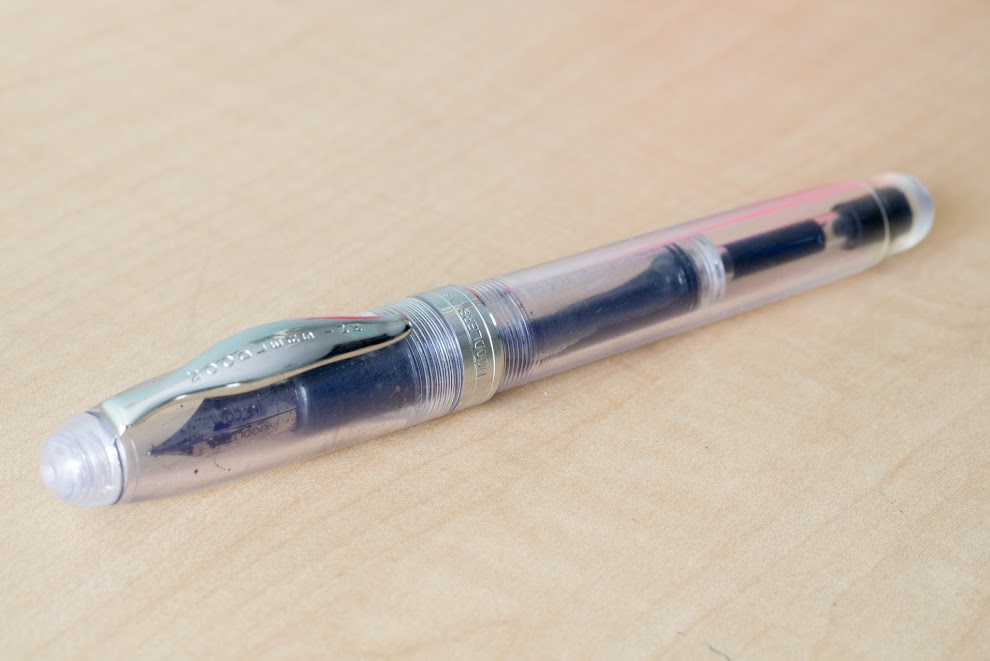 The Ahab is a standard size fountain pen. It's light and has a good balance in hand.

The pen is mainly made of plastic. The plastic feels cheap even though it's actually pretty solid and strong. It seems easy to pick up scratches and mine has some already after just one day. I don't mind scratches on a cheap pen though since I did not buy this to be a display pen. The plastic also has some sort of smell which will wear off in time. 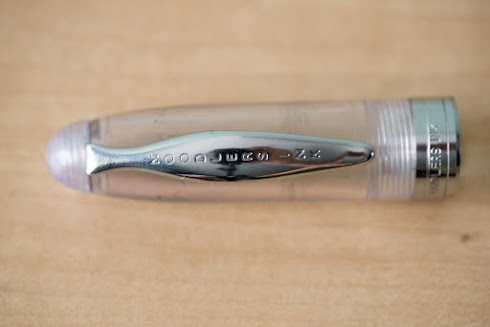 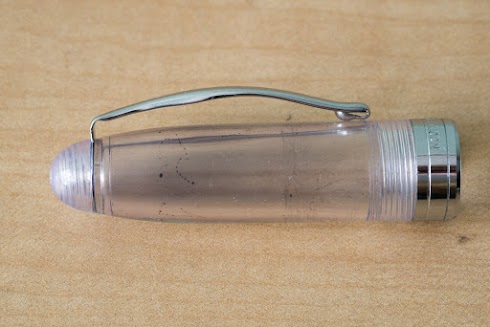 The top and bottom are rounded off. The cap is the screw-on type. I don't particularly like the curved design of the clip. 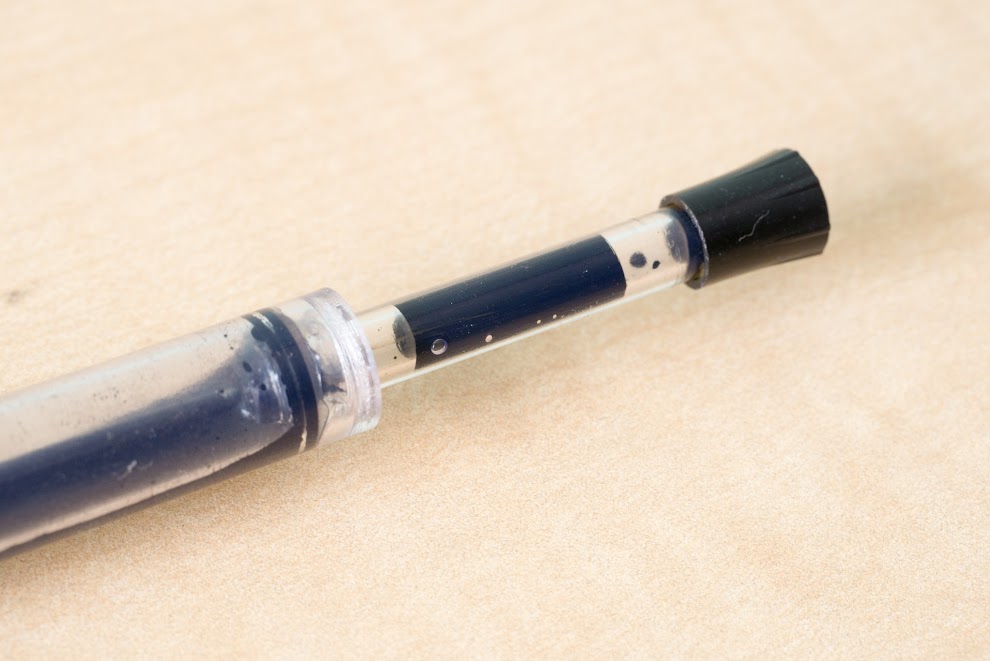 The pen uses a piston refilling mechanism. You refill by pushing and pulling the plunger. By the way, the Noodler's Konrad which also has a piston filler uses the twisting motion with the knob to refill. It has a rather large ink reservoir which means you don't have to refill it often, and it's able to last a whole day of intensive sketching.

The Ahab has a large steel nib. The nib feels rather stiff and with some pressure you can get a thicker stroke.

There's only one size to the nib and the default stroke looks like a Fine-Medium to me. When you apply pressure you can get a broad stroke (almost 1mm). The nib is stiff and can't be compared to vintage pens or the Pilot Falcon nibs that are much more expensive. On a scale of 1-10 where 10 is the softest, I would say this nib has a stiffness about 3-4. It's not as flexible as I had expected. 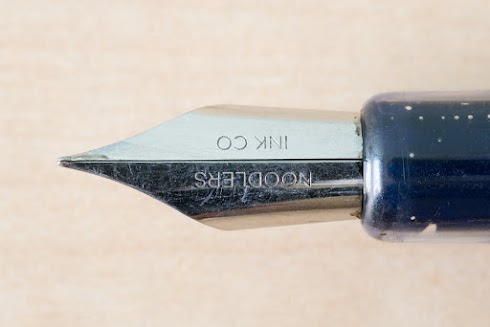 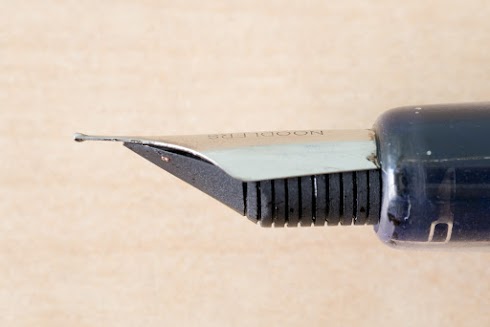 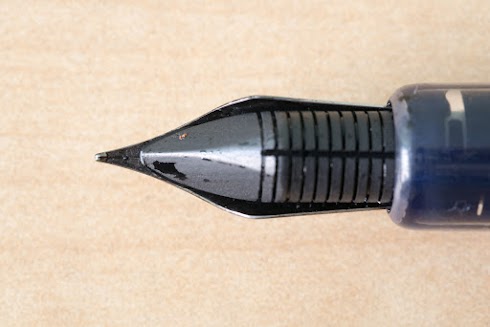 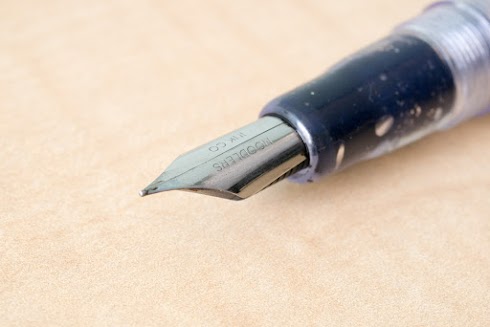 I've read some users mention that the pen needs to be set up properly before using. I guess I'm lucky because mine worked perfectly out of the box. The pen can be disassembled easily to remove the nib, feed and body. The ink reservoir is attached to the grip section and not detachable. It's easy to clean this pen.

The nib is smooth on paper. Ink flow is good generally speaking. If you create the broad strokes too fast, there can be railroading. Railroading means ink flow could not catch up and two lines are created by the two tines that are apart. I don't really encounter the railroading problem often enough so it's not a big issue.

Here are some sketches drawn with the pen.

There are people who bought this pen for script writing. It works for script writing but you really have to apply the pressure to get the thicker strokes. There are better pens out there with softer nibs that are more comfortable to write with, such as the Pilot Namiki Falcon which is more pricy. Budget flex nib fountain pens are quite rare though.

It's a nice pen to draw with because the nib is smooth.

If you look at the hatching marks on the right of the car, you'll be able to spot two strokes with railroading effect.

For a budget flex pen, I think it could be better. It's still a bit stiff but it's definitely more flexible when compared to fountain pen nibs that does not flex at all. Performance-wise, I think it's a good pen.

For other flex nib pens, check out the Pelikan M200, Pilot Namiki Falcon and Dilli.

You can find the Noodler's Ahab and its many different coloured models on Amazon:
Amazon.com | Amazon.ca | Amazon.co.uk | Amazon.de | Amazon.fr | Amazon.it | Amazon.es | Amazon.co.jp

Hi, i am new to fountain pen and recently just bought noodler’s ahab. After I disassembled to clean it (the ink dry inside after being left laying around for a while),and reassembled,the pen cannot pull in any ink to the reservoir. I have put them together tightly so not sure why this is happening. Have u ever encountered this issue and have any advice to solve it?

@Adeline
There could be some leakage of air.
Try disassemble the pen and fill water to see if there are any leakage.

What kind of ink did you use? I know I learned the hard way as a newbie to not use India ink.

@Meg
I use Noodlers Bulletproof Black

I own 47 fountain pens, expensive to relatively inexpensive.One I didn't have was a Noodler w a three kin nib. It has a unique ink feed that does not keep up with my writing or drawing. I've used Noodler's ink, thinking that would produce a better more flowful feed, but alas, ink doesn't seem to be the problem. I'll put it aside and not attempt any further torment trying to write with it.