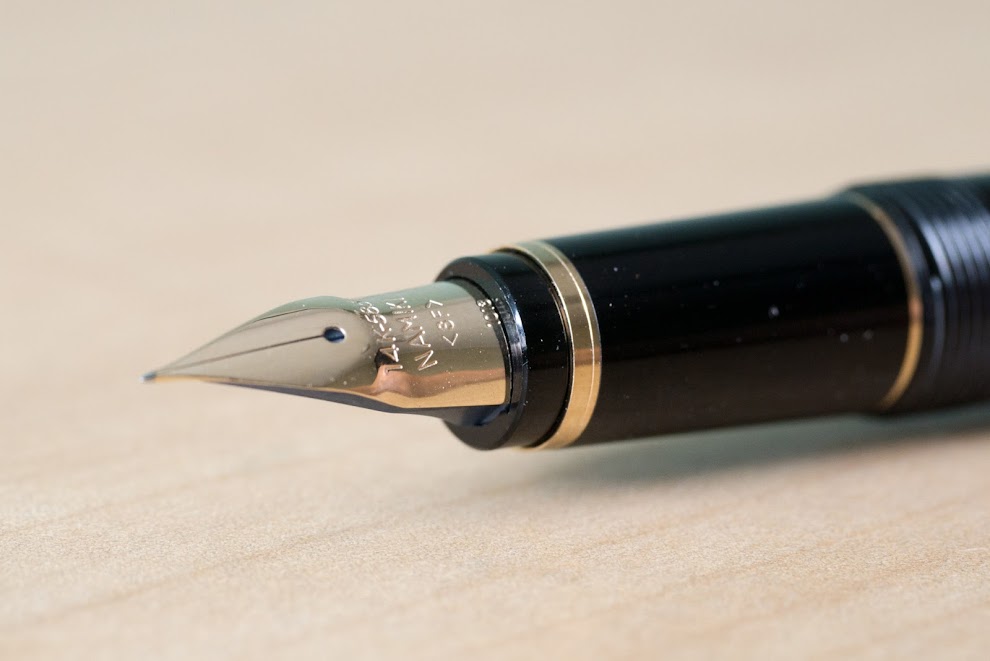 I only got to know of the Pilot Namiki Falcon through a Youtube video.

The penmanship showed in the video mesmerised me into getting the fountain pen. The Namiki Falcon showed above actually has a Spencerian modification, meaning the nib was grounded to extra fine with added flex to make it more suitable for writing Spencerian script.

The Namiki Falcon I bought two years ago was the unmodified standard off-the-shelf model, but recently I've bought another with the Spencerian modification. So now I have two Namiki Falcons. I like them both.

This review will cover both the standard and modified Namiki Falcons. 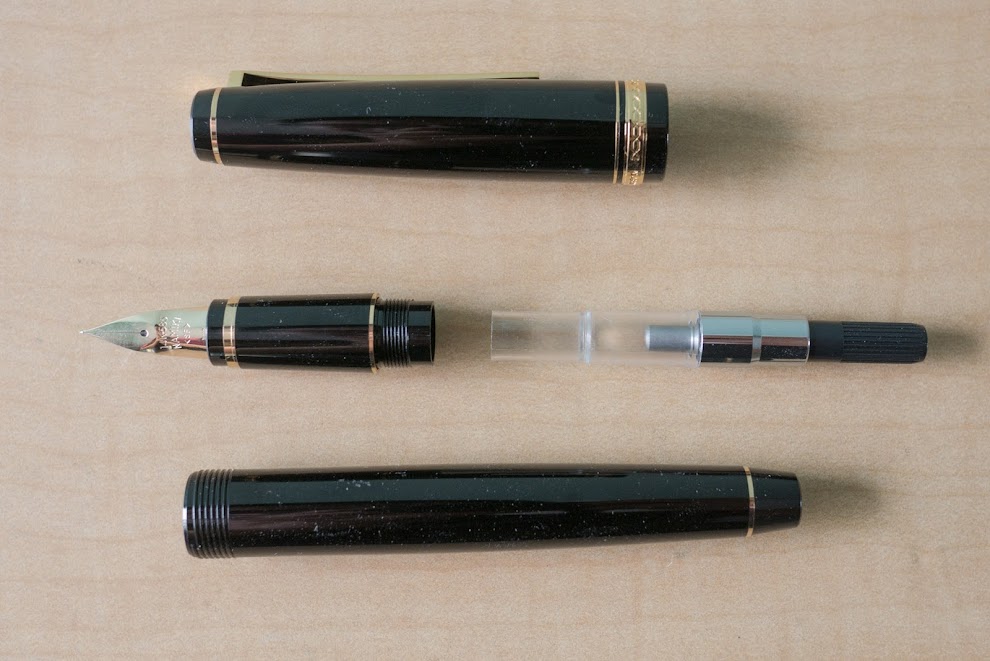 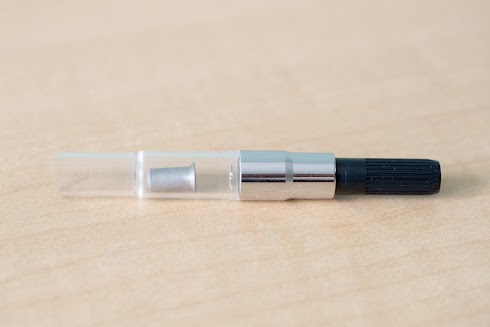 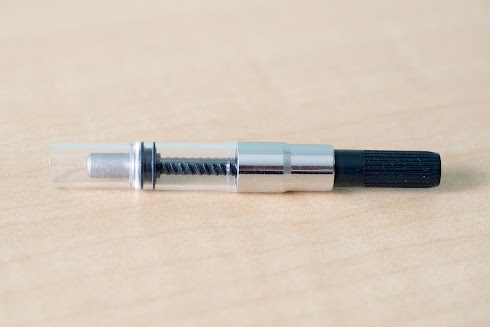 The pen comes with a twist-type converter in the box. 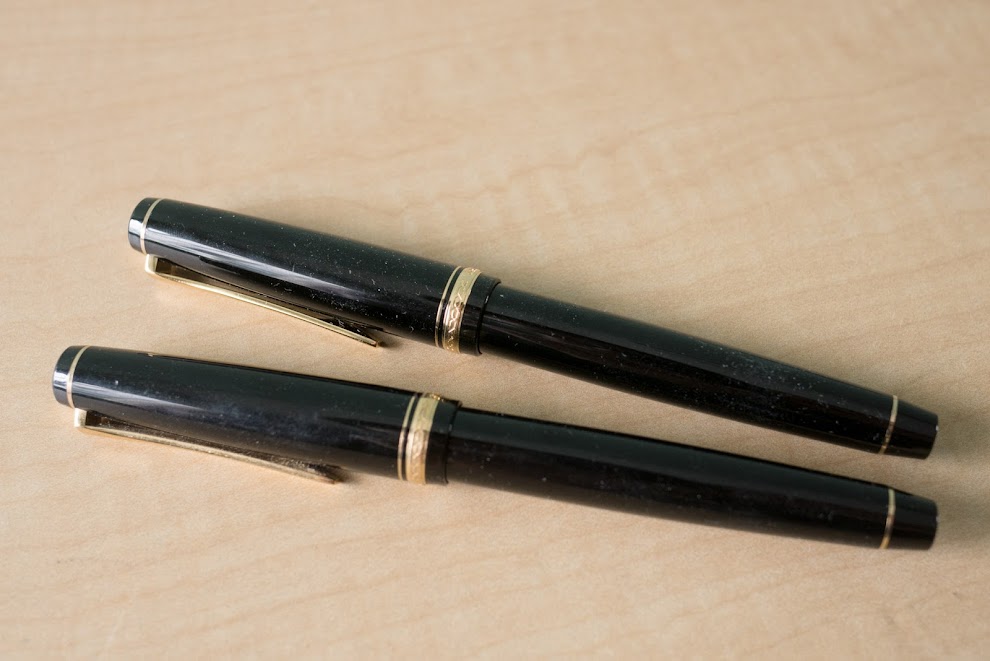 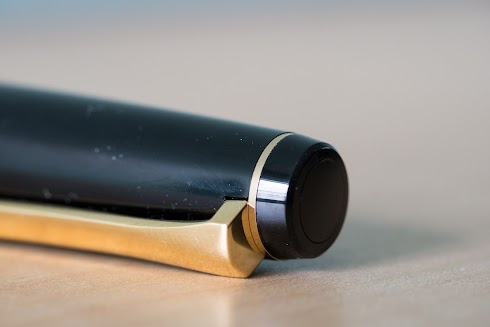 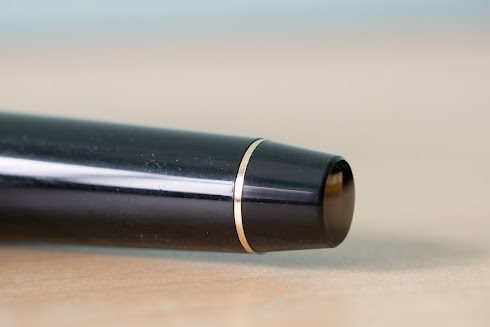 The black resin body is standard size with gold trimmings at the usual places. 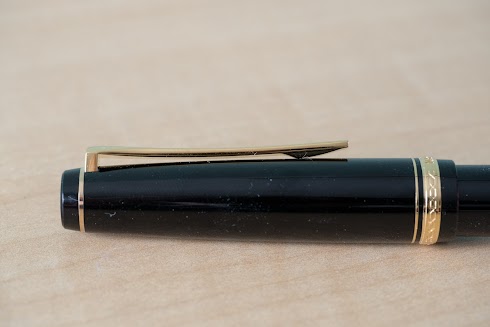 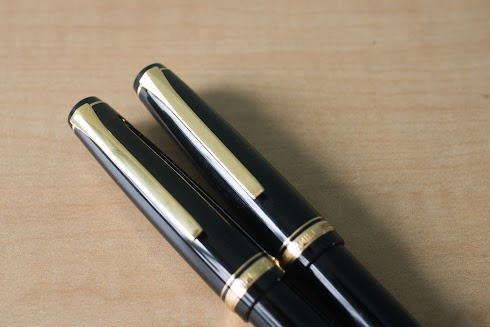 For the customised pen that I bought from Nibs.com, I noticed the clip was polished to a much smoother surface when compared to the unmodified one which still has some angular form. The clip on the cap is pretty prone to scratches. Both of my pen clips have some scratches and tiny dents from my carelessness, for which I feel a tinge of sadness. 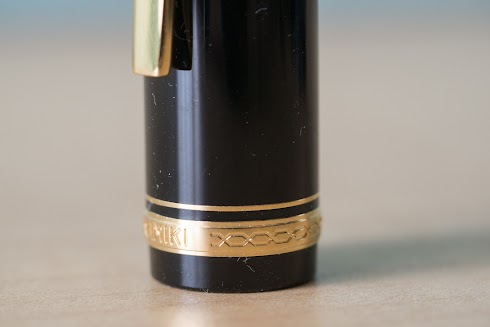 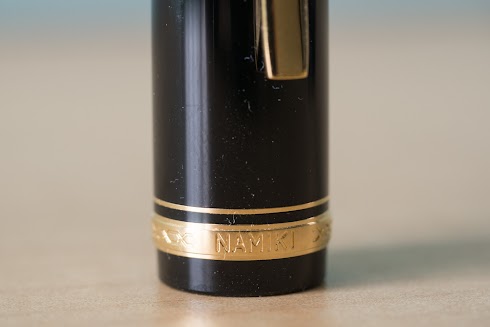 This is the design at the tail end of the cap.

The pen feels very well balanced when held alone or posted with cap behind. It weighs just 18.3 grams. Rather lightweight, the way I like it. 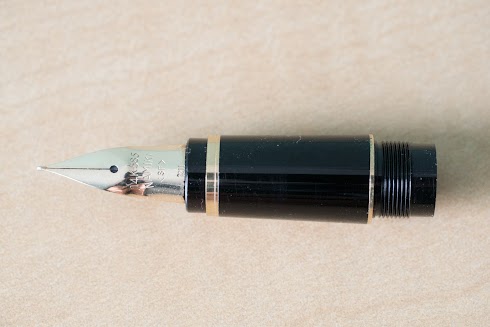 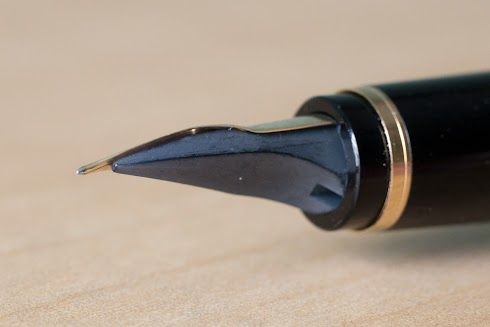 The distinctive shape of the nib is bent to a smooth curve, somewhat like a bird's beak but not to the full extent. There's no design carved onto the 14K gold nib surface except for some numbers and the word "Namiki" and "Japan". 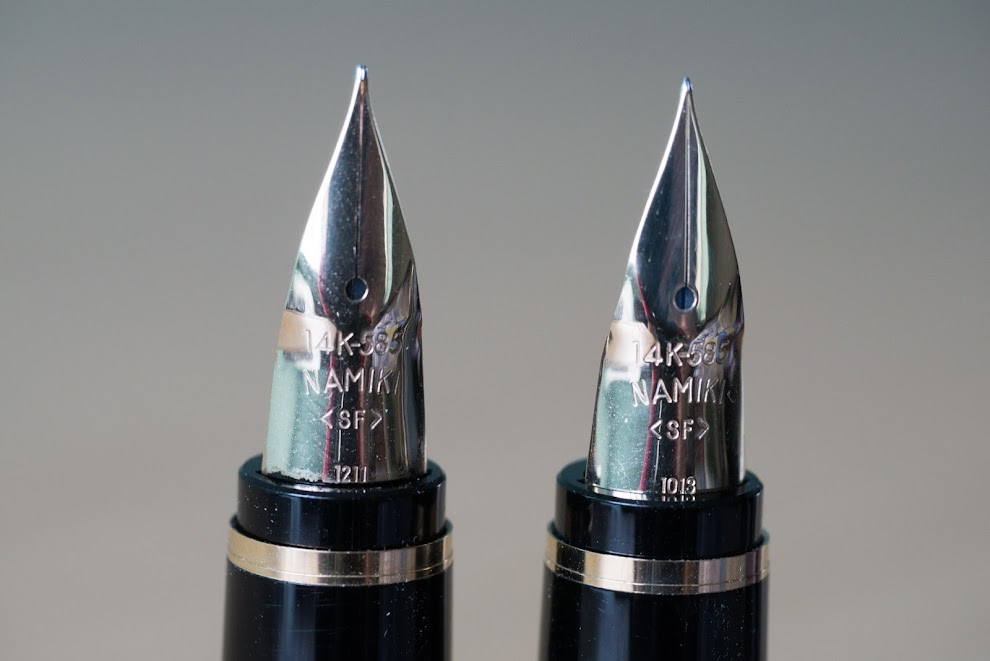 On the right is the Spencerian modification, and left is the unmodified. 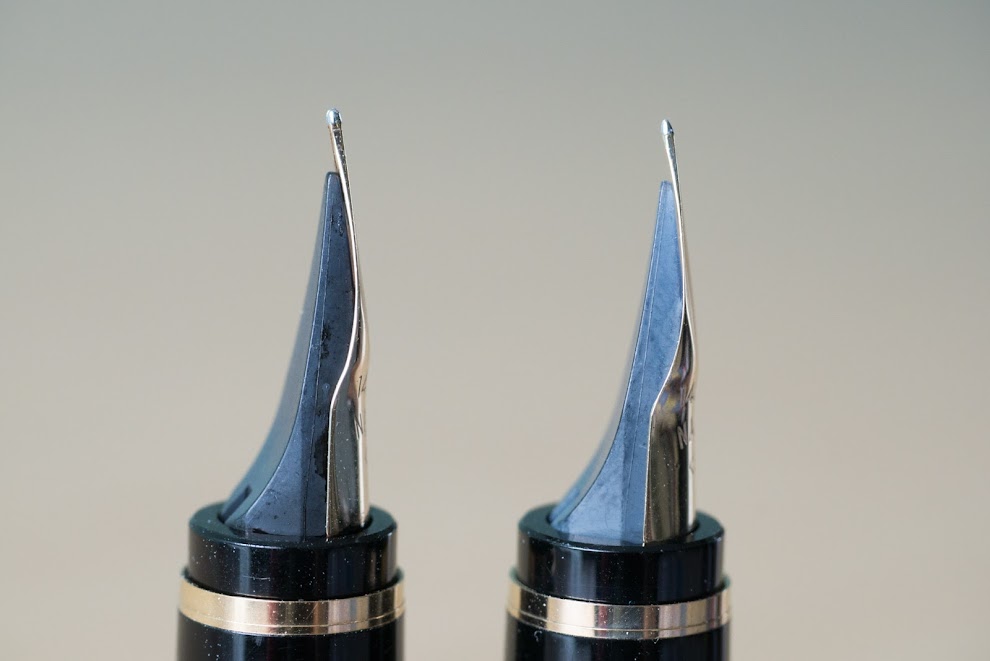 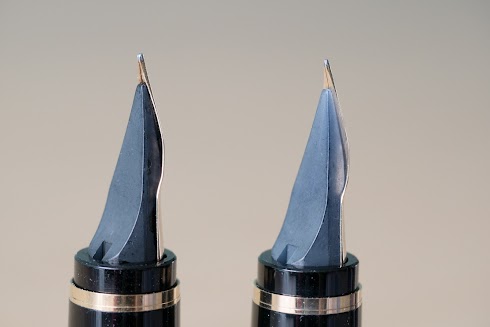 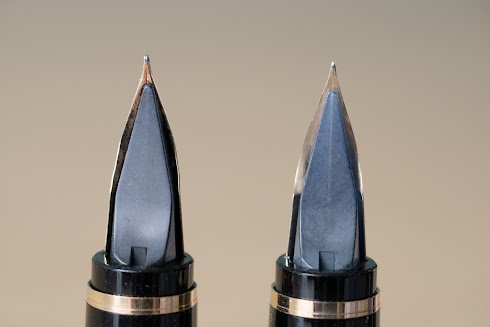 You have a choice of extra fine, fine, medium and broad nib. The standard one I bought has the fine nib. If you're getting the Spencerian modification, it doesn't matter what nib you get because it will eventually be grounded down to extra fine. 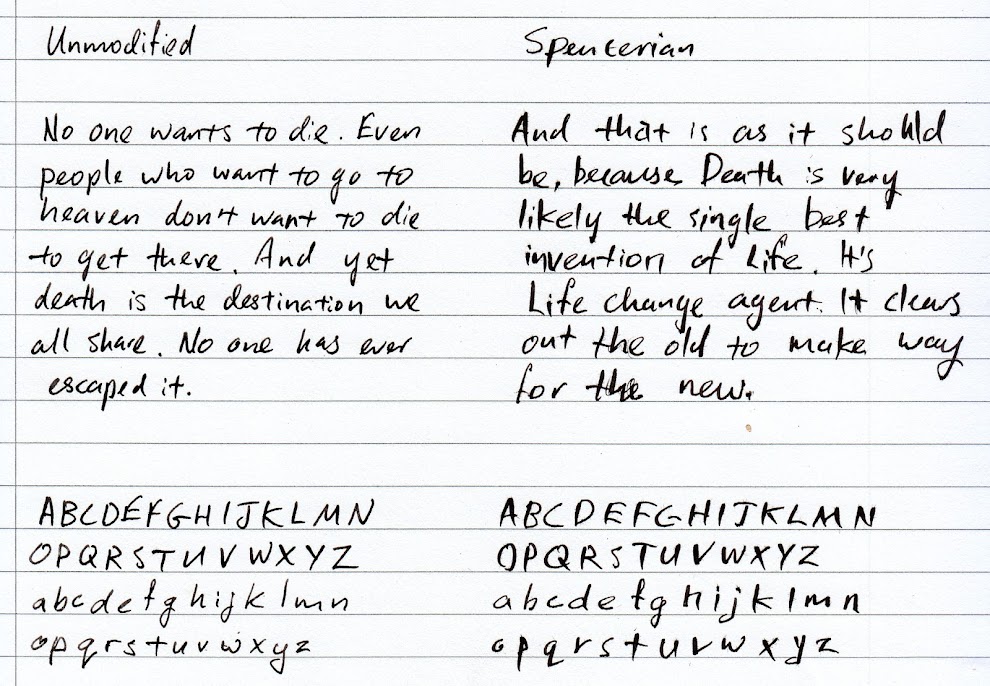 The standard nib already comes with some degree of flex. Apply slight pressure and you can get a thicker stroke. Writing is smooth and ink flow is great.

The Spencerian modified nib comes with additional flex. It requires even lesser pressure to flex. Writing feels slightly scratchy which is not surprising since it's such a sharp nib. Depending on the grain and texture of the paper, sometimes it has tendency to dig into the paper. The strokes it can deliver is both thinner and wider compared to the unmodified version. The additional flex is the main selling point.

With the Spencerian modification, you can almost get brush-like strokes going to super thin to much thicker, I would say about 0.2 to 1 in terms of technical pen nib sizes. The unmodified one goes from 0.3 to 0.8 probably based on visual unmeasured inspection.

When sketching, drawing broad strokes with the Spencerian model, there's a chance of railroading when you go too fast. Railroading means the nibs flex apart and ink flow can't catch up resulting in two lines rather than one. For normal writing speed, ink flow is good enough and there won't be such railroading problems.

The variance of stroke thickness from the standard vs Spencerian is quite significant that I feel like they are different pens. Even though I've two Namiki Falcons, there are enough characteristics to set them apart.

Below are some sketches I drew with the pens. In typical use, I don't really flex the nibs that much. 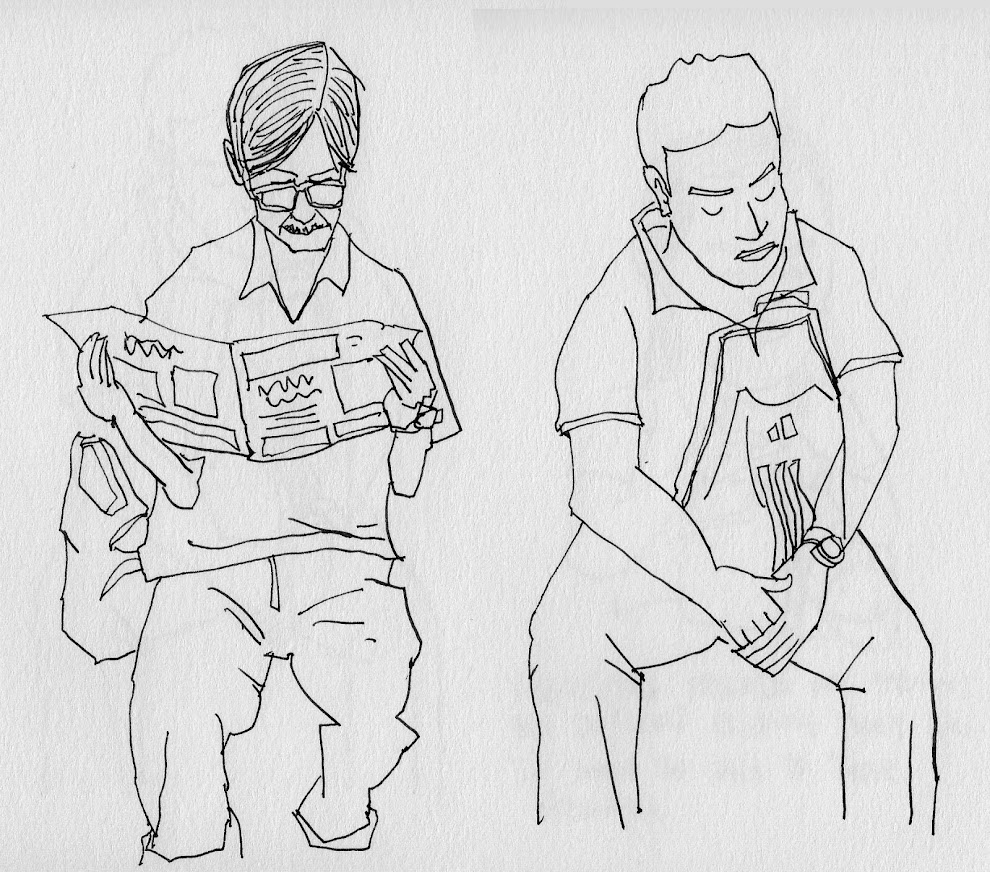 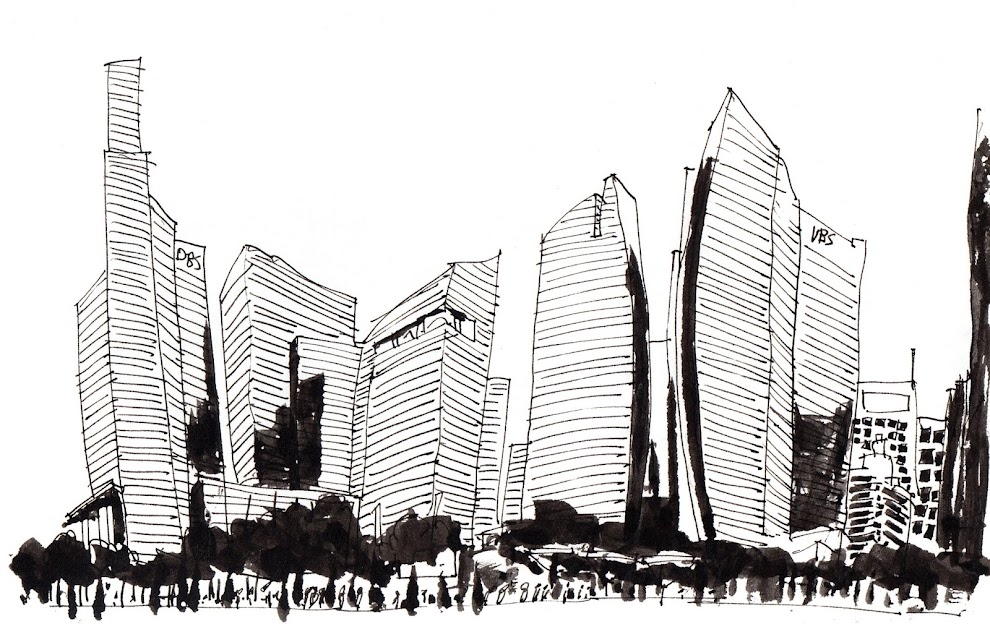 One nifty feature of the nib is you can use the back of it to fill in large areas with ink. Remember the beak shaped nib? When you turn the pen upside down, the curved part is actually convex and comes out a bit and you can use the flat side of the nib to create a thick 0.9cm stroke. 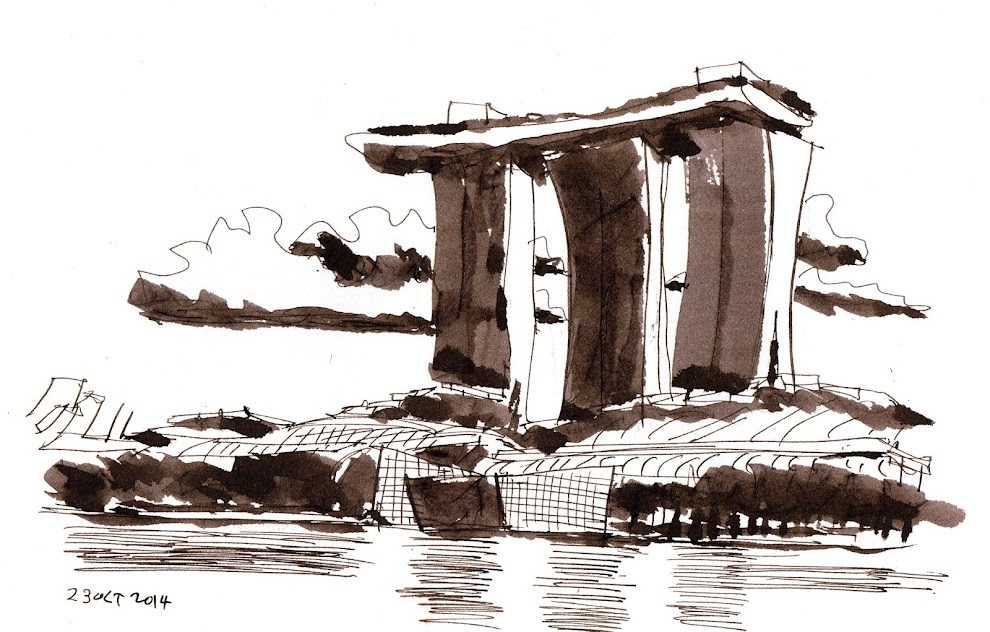 The shaded areas are filled in with the back of the nib. Since the Iroshizuku sepia ink I used wasn't not totally dark, you can see the different layers of ink overlaying on top of each other. 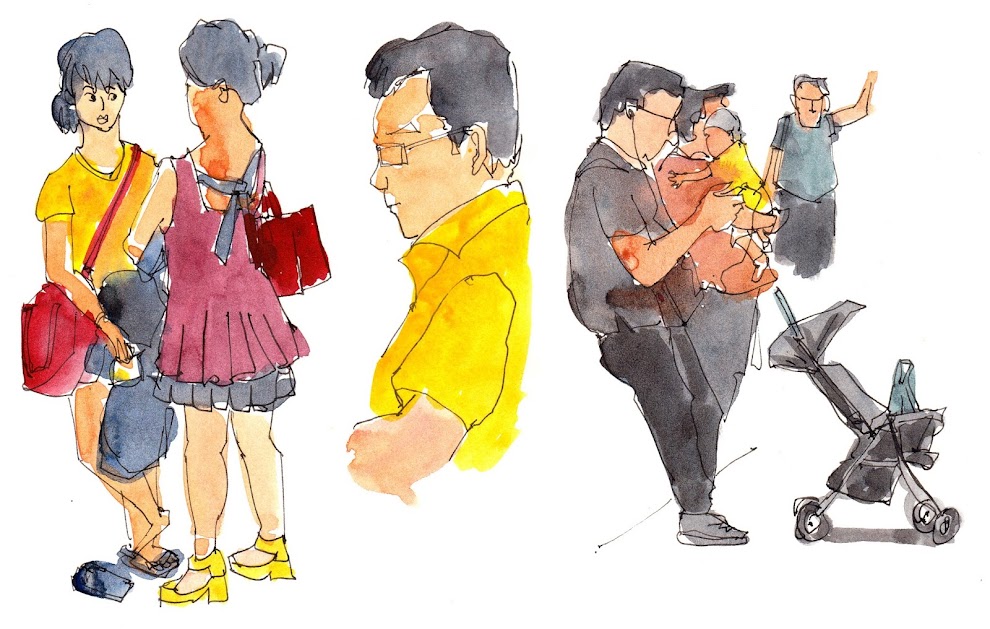 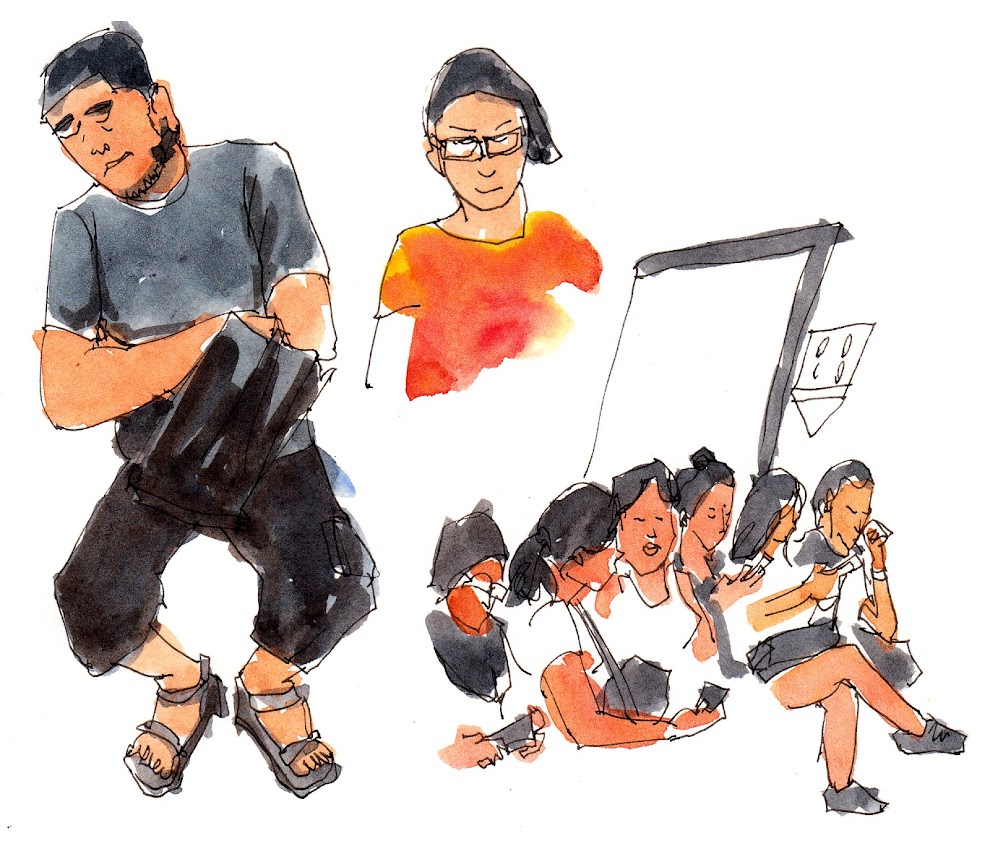 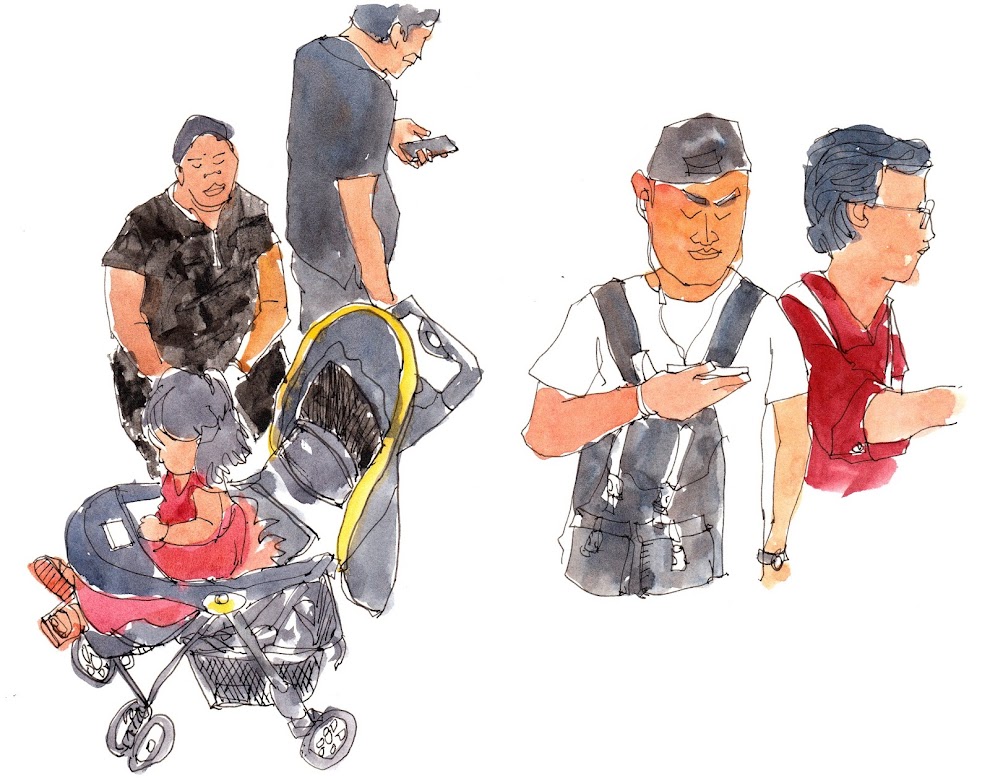 For the three watercolour sketches above of train passengers, I did not flex the nib. 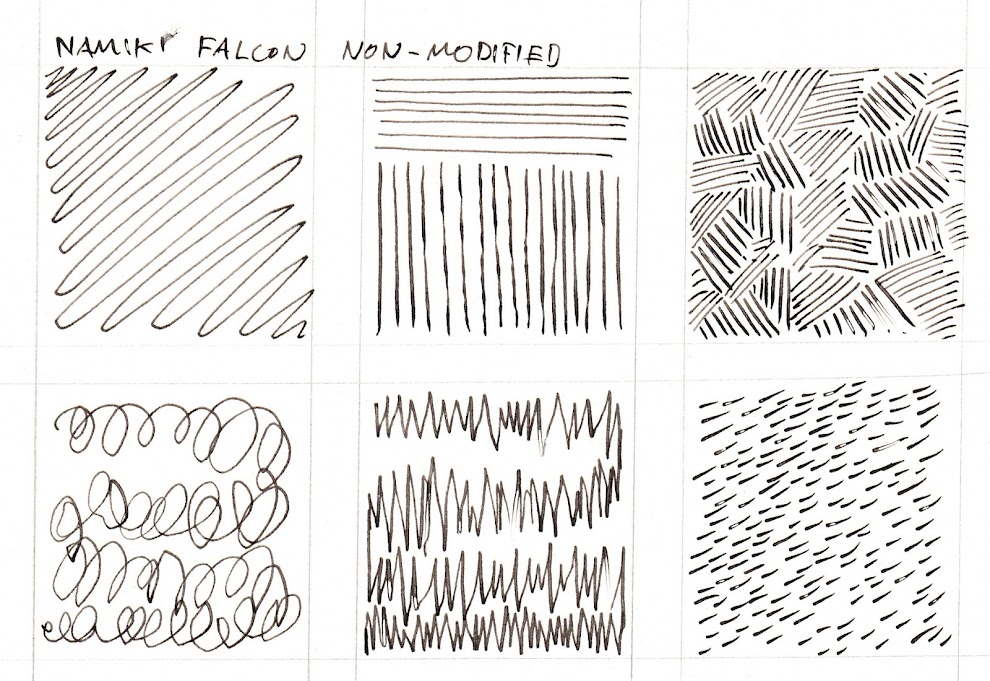 These are strokes from the non-modified Namiki Falcon. Notice at the top right box, there are several strokes with railroading symptoms. That happens when the strokes go fast and the ink flow cannot catch up. 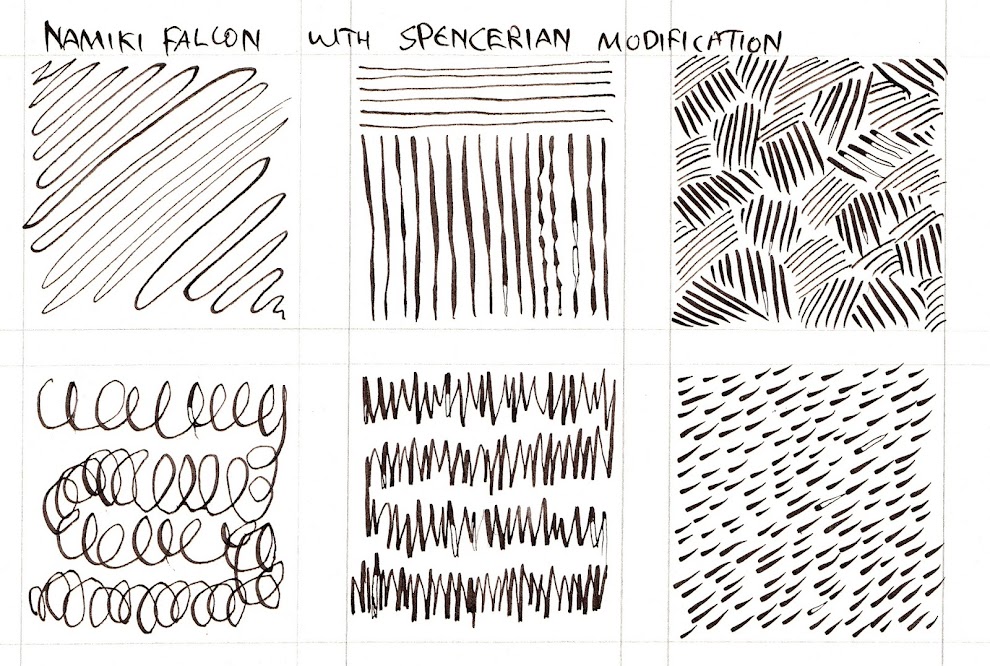 These are the strokes from the Namiki Falcon with Spencerian modification. The greater variance in stroke thickness is quite obvious here.

It can be a good alternative to dip pens typically used for inking comics. By the way, Mattias Adolfsson uses a Namiki Falcon for his drawings.

To prevent railroading is as simple as slowing down the strokes.

As the nib is quite sharp for both the pens, the moving the nibs in upward motion may sometimes get into the grain of the paper. As such, upward strokes are always thin. Thick lines are always created with the nib pulled downwards. 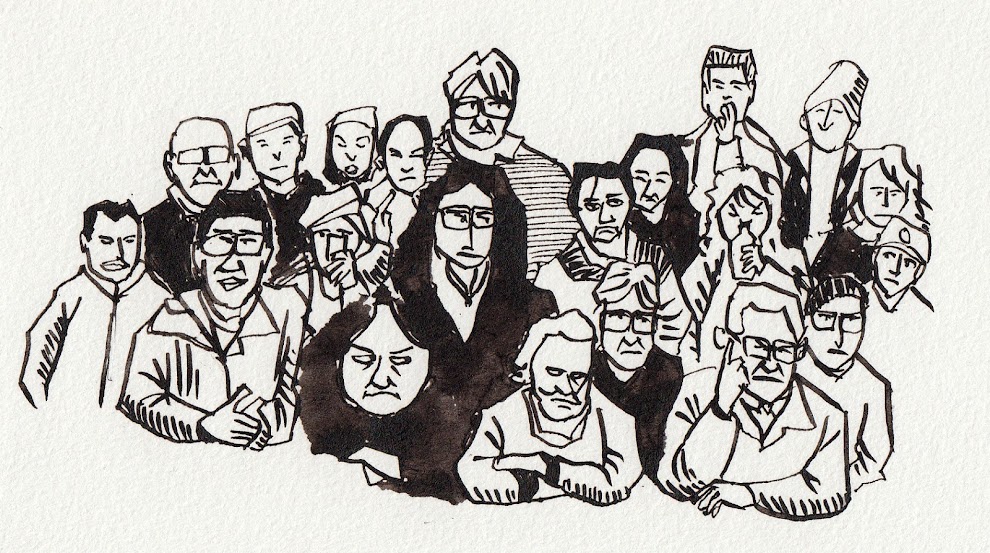 Here's a drawing with the Spencerian modified Namiki where different techniques are in used. There are some hatching, the thick and thin strokes, and filling in the blacks with the back of the nib. The drawing measures only 13 cm wide and the extra fine nib is really great at the tiny details.

This is the video I talked about earlier that demonstrates the ability of the Spencerian modified nib. I would advise not to watch it if you have impulse purchase tendency. LOL.

The Pilot Namiki Falcon is a nice pen for sketching, both the standard and Spencerian modified ones. It's a pen more suited for those who like thinner strokes. I can't speak for the medium and broad nib in terms of how much flex they have, so if you have those the M and B nib please leave a comment below. And if you like thin lines, also check out the Carbon desk pen and Platinum KDP-3000AN/DP-1000AN desk pen.

Once again, I want to mention that the Spencerian modification is too scratchy for normal writing purposes. The modification is more for those who like scripts and cursive handwriting, or use it for drawing.

Whether you get the unmodified or Spencerian will depend on your drawing style so I can't really recommend one over the other. As I've said, I like both.

As for the standard Namiki Falcon, follow these direct links to find the pen on Amazon (US | CA | UK | DE | FR | JP).

Or if you want to look for an affordable fountain pen with flex, check out the review written by my friend Andrew at https://www.parkablogs.com/content/affordable-fountain-pens-flex-drawing...