This review is written for artists.

Today, I'm reviewing the Platinum 3776 fountain pen with a music nib. Platinum had named this series 3776 after the height of Mount Fuji in Japan.

The design is simple enough. Resin body with gold trimmings. On the cap are the words "Platinum #3776 Japan".

The body is short but you can put the cap on the back to extend the length. Overall, it's lightweight, just the way I like it.

Mine's the black body and at times, I find it difficult pick out this pen among other brands in my pencil case that also come in similar colours. It's not a pen that calls out for attention however...

The 3776 body also comes in various colours. Among the different colours, the more beautiful ones would be the limited editions such as NICE edition (Nice is a place in France) and SAI edition (Sai is one of the lakes around Mount Fuji). By beautiful, I mean BEAUTIFUL, especially the SAI edition which screams ZEN with its transparent body with Rhodium-plated 14K gold nib. The more I look at those limited edition 3776s, the more I feel like buying them. Those pens deserve separate reviews. 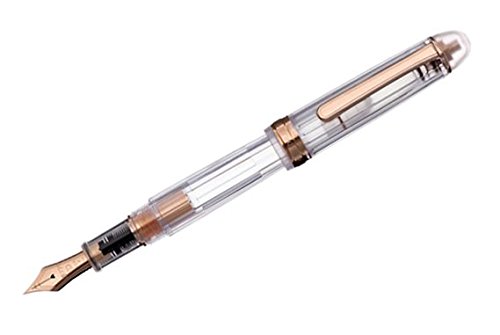 This is the limited edition Platinum 3776 NICE. 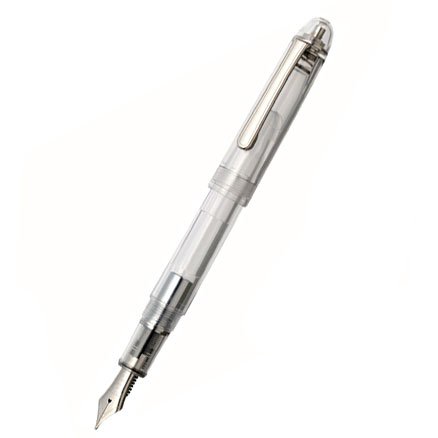 And this is the limited edition Platinum 3776 SAI.

Here are the different parts to the Platinum 3776.

It uses a Platinum convertor that does not come with the pen and is sold separately.

The cap is the twist type. So far it's quite effective at preventing the ink from drying out. I've heard that newer models have some rubber ring inside that's even better at sealing.

The Platinum 3776 comes with the usual options of fine and medium nibs but there's this special option for a music nib. All nibs are 14K gold. By the way, 14K gold is composed of 58.3% gold and 41.7% of other metals. It's 14K gold because it supposedly more resistant to tarnishing and stronger than 21K or 24K. The nib I have here is very stiff.

A music nib is designed to write musical notes quickly. It's sort of like a calligraphy nib that's capable of writing broad and thin strokes depending on how you hold the pen.

What is special about this particular music nib is that there are two slits instead of one. With two slits, it can supply more ink to the tip and helps to prevent skipping while writing or drawing.

You can read more about the music nib at Richardpens.com and Gourmet Pens

There's a very tactile feeling when drawing with the nib on paper. It's a feeling I'll associate with that from using a wooden graphite pencil on paper.

It's smooth on paper but it's not the smoothest I've used (the winner goes to the Sailor 1911 fountain pen).

Because the tip of the nib is actually a rectangle and not rounded off at the corners, if you don't lay the nib flat perfectly, the sharp corners will cut into the paper and will affect the smoothness and the ink flowing out. That's a non-concern as it just takes a bit of getting used to.

Ink flow is overall is smooth.

These are my writing sample. I use this pen more for drawing than writing. For writing, it feels very much like writing with a broad nib calligraphy pen. However, the nib isn't as broad to create very pronounced calligraphy effects.

Below are some drawings with the pen.

Drawing with the pen requires a bit of getting used to because it's no different from drawing with a calligraphy pen.

While this pen is capable of producing either thin or thick strokes, the key to producing them is how you hold the pen. Let's say you want to draw a vertical line that varies from thick to thin to thick, then you'll have to change your holding position quite drastically to change the stroke's width. This is unlike some other fountain pens, e.g. those with flex nibs, where you can maintain the same holding position but increase the stroke thickness by increasing the pressure on the nib.

Usually, I'll just pick an angle and make a drawing just from that hand position. I don't usually change how I hold the pen after I start. Constant changing of holding position is quite tiring.

Since the music nib is broader, sometimes it can be helpful and faster to fill small areas with black. Of course for larger areas, a brush is much faster and the application more evenly distributed. I used a brush for the car's shadow. 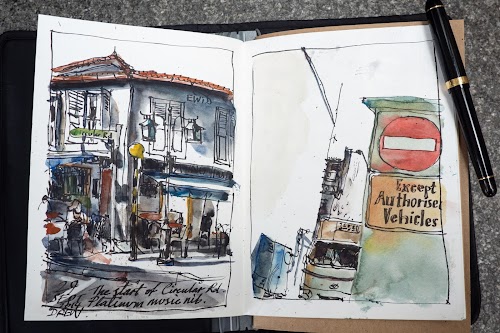 Drawing by Drewscape with the pen 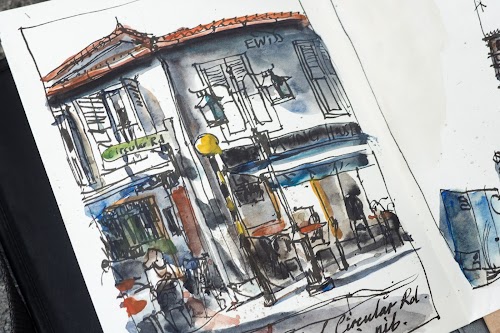 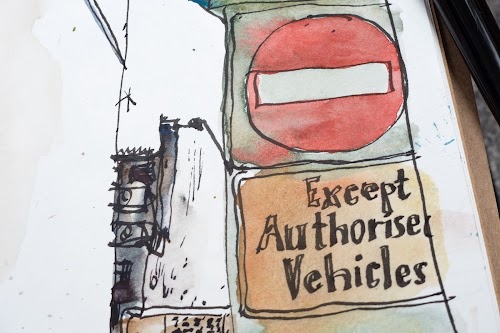 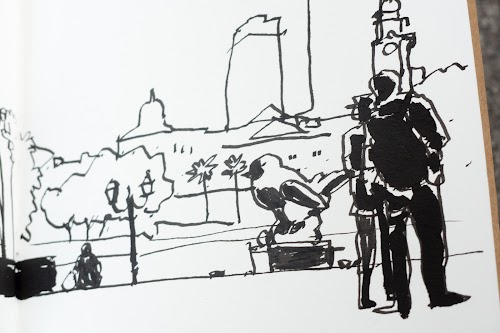 Overall, I'm quite pleased with using the music nib for drawing. The nice thing about the nib is thin and thick strokes it can produce, and the varying thickness helps create visual interest in the drawing.

Since the nib is quite broad, I have the tendency to draw bigger and keep my drawings simple.

If you're just going to get the fine or medium nib, then the lines you get won't be different from those you'll get from standard fountain pens such as the affordable Lamy Safari or the expensive Ecridor Retro.

Drawing with such a broad nib is certainly not to everyone's liking. I suggest getting a cheaper version of a calligraphy nib, such as the Pilot Parallel Pen to test out first before putting down the money for a Platinum 3776 with music nib.

The 14K music nib doubles the price, and for other coloured bodies the price is almost three times.

Is it worth it? Pricing is really subjective to individual. But all I can say is, I really like drawing with it. I prefer thicker strokes and I find the lines from the music nib to be bold and there's the varying thickness that creates visual interest.

Do you happen to know if the Platinum 3776 takes the Platinum carbon ink cartridge? Or it works only with bottled ink?

@MMello
It should. You can check eBay for cheap ink cartridges. But it's more economical in the long run to get ink converter that you can refill.