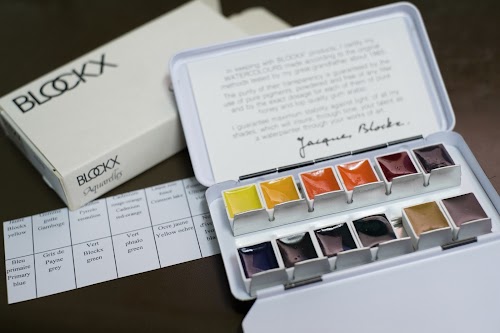 So yesterday, the Blockx pan watercolours arrived. I didn't know they were sending me 28 pans. So many! Luckily I have a spare huge Winsor & Newton palette lying around unused (too heavy) that is now proving to be useful again.

Blockx was established in 1865 by Jacques Blockx I (1844-1913), a chemist. Since the company is focused on the chemistry, they have invited artists to test out their paints.

Here's the list of colours that I have received.

That's 28 out of their range of 72. Single pigment paints consists 59.

Here are my colour swatches:

Most are transparent or mostly except Lemon Yellow, Yellow Ochre and Pyrrolo Vermilion. Venetian Red and Cobalt Blue also look to me like semi-opaque or semi-transparent.

While opaque colours have their useful traits, I personally prefer my pigment selection to be all transparent for easier mixing. Opaque colours will mix to mud very quickly. So straightaway, I know I will not be picking those five colours mentioned in the previous paragraph.

My colour selection has been greatly influenced by this book called Confident Color. There's a chapter inside that recommends the different primary colour sets. That has always influenced me. So my preference is towards choosing more primary than convenient. Even the QoR watercolours that I'm still using is devoid of green -- I've removed the weak Viridian.

So currently what I'm leaning towards are

That's three sets of primary, one green and two earth.

Burnt Umber's shade can be created from Burnt Sienna by adding Ultramarine. So I'm not sure if I would include Burnt Umber.

There will be more testing and colour mixes coming soon. I'll do a lightfast test too since Handprint mentioned that it may be a problem with some Blockx pigments.