I've been reading a lot on QoR Modern Watercolor and finally gave in to temptation to get an introductory set to try out. QoR (pronounced as "core") is made by Golden Artist Colors, a company probably more known for their acrylics. The name comes from a technical acronym meaning "Quality of Results."

QoR is a relatively new watercolour brand that was released in 2014. They currently have a range of 83 colours including three Iridescent ones. The watercolours are sold in 11ml tubes as compared to the usual 14ml or 15ml as used by Winsor & Newton, Daniel Smith and other brands. Their introductory set uses 5ml tubes.

QoR watercolour uses a unique polymer binder called Aquazol. It's interesting. But personally, I don't feel any difference compare to other brands that use other binders, nor do I know how to test for them anyway.

I bought the introductory set which has 12 colours. There's also a smaller set with 6 colours. The tubes come held in a plastic holding that's inside a tin box. The box has a cover that seems to be enameled and can be use as a palette as there are many mixing wells. I'll probably use the box for keeping stuff instead of as a palette.

I prefer to squeeze them out into pans and use a separate palette. 5ml is about enough paint to fill a full pan or two half pans.

Alright, the colours include in this set are:

With the exception of French Ultramarine Blue and Payne's Gray, the rest are all single pigment paints.

Many of the colours are staining. 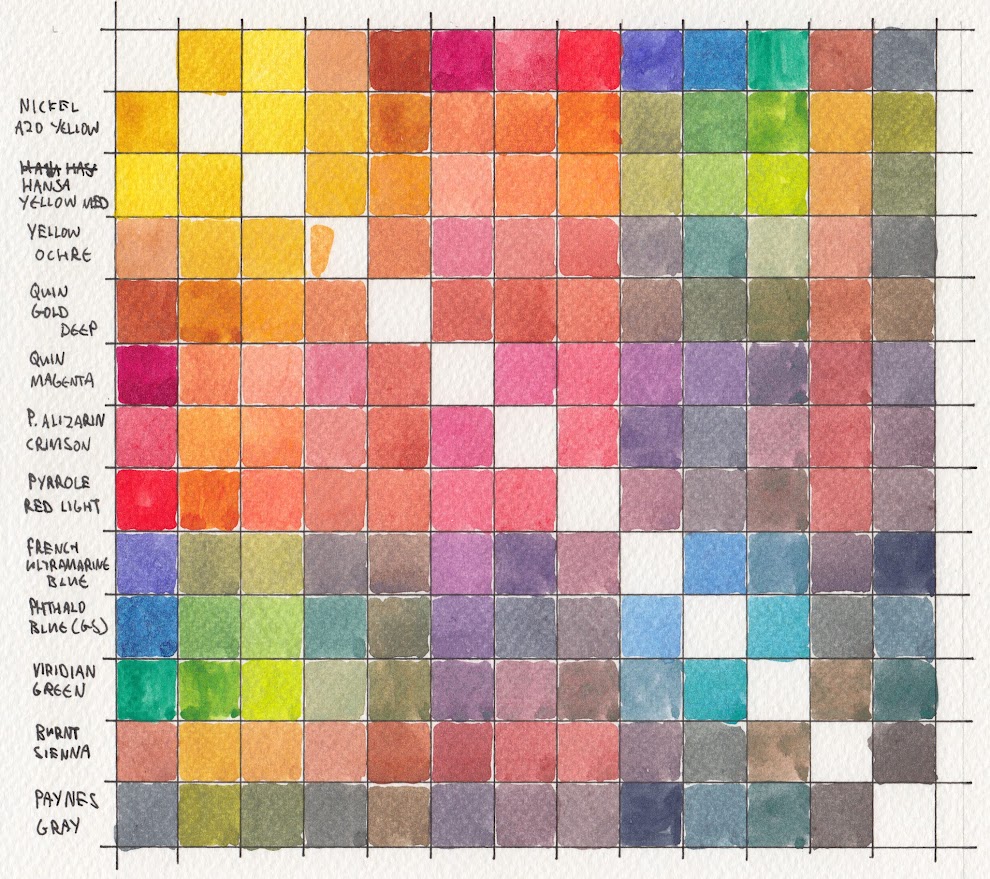 Here's the colour chart I created.

The core colours are vibrant but they mix to mostly pastel or candy-like colours. I have difficulty mixing dark colours. Most of the mixtures have tonal value somewhere in the light to medium range. The darkest are the one mixed with Payne's Gray. While there are artists who hate Payne's Gray (3 pigment colour), it does serve a purpose to darken the colours easily for this set of colours.

There are three yellows and three reds. I wished they could have included three blues as well, swapping out Quinacridone Gold Deep which is pretty close to Burnt Sienna

Viridian is a very weak green with low tinting strength, so that's not good when you can to coax the colour out.

Below are some watercolour sketches I coloured with the QoR watercolours.

Some of the small panorama sketches above are drawn on The Perfect Sketchbook with off-white Saunders paper.

Here I tried using French Ultramarine Blue with Burnt Sienna for the sky which gives me more of a purple hue as compared to the moody grayish hue from Daniel's Smith's combo.

French Ultramarine Blue granulates slightly but overall QoR watercolours aren't very granulating. Or maybe that could be because of the paper.

Here's how I arrange the colours in my palette now. Yellows and browns to the left, red and green on top, blues and gray at the bottom.

Most of the colours rewet well except Viridian which becomes hard and is really difficult to dissolve again.

By the way. tube colours are more intense than the dried out paint that are being rewet. Maybe it's got to do with the binder it uses, maybe not.

Overall, the colours are good. However, they aren't particularly outstanding when compared to other prominent brands such as Winsor & Newton or Daniel Smith that I usually use. But the quality isn't really too different or pale in comparison. Just that different brands may use different pigments for their same name colours, and sometimes the properties, such as granulation or tinting strength may differ.

However, I do notice and feel that QoR colours is just a slightly less vibrant compared to other brands. This is something I observe when comparing the colour chart against other brands. However, I've a friend who used QoR and said that they are quite vibrant, so it could be that when the watercolours dried in the pans, it became more difficult to build up the vibrancy.

Colours is a very personal thing. After testing so many brands of watercolour sets, my preference is still Winsor & Newton, Daniel Smith and Kremer Pigments.

I will continue to update this review in the coming months until I use up all the colours.

Overall, the introductory sets of 6 and 12 are good for testing out the colours without burning a hole in your pocket.

As someone who has painted in acrylics for years Golden is considered the gold standard. They also make Williamsburg oils.
But, looking at the paints, and I am a newbie to watercolors, I felt they were not quite the gold standard as their acrylics.
Reading your review I am glad I passed them over and went with my sense about them.
Maybe over time they will work out the kinks and perfect the paints to being better

Do you still feel that Cotman watercolors are more vibrant than the QOR ?