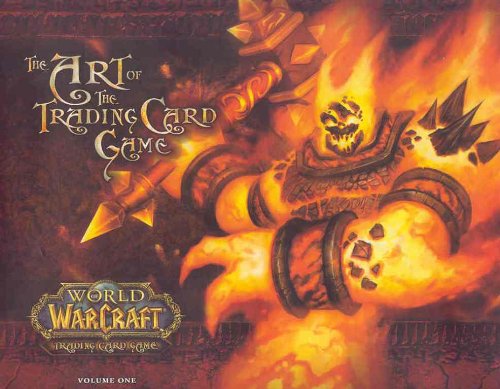 There are a couple of art books for World of Warcraft already and this one's on the trading card game. The sets featured in this book are

It says on the cover that this is volume one so it's safe to say there's going to be more in the future.

There are over 300 illustrations in this thick 288-page book. The art is printed large at one to two per page. It doesn't contain all the cards but contains enough. Although I don't recognise any of the World of Warcraft characters since I don't play the game, I do see a lot of familiar artists providing art for the cards. Among them are Todd McFarlane, Alex Horley, Julie Bell, Boris Vallejo, Clint Langley.

Here's what Samwise Didier (Senior Art Director of Blizzard Entertainment) says about the style of art:

Blizzard art (and especially that of Warcraft has a distinct style and feeling about it. It takes an artists months to get all this down to the point where it becomes part of his or her artistic nature. Some of the basics that Blizzard artists learn:

Anyway, I like the section on flaming beasts and lava monsters from the Molten Core Raid Deck. Aleksi Briclot's Lucifron and Clint Langley's Magmadar are very epic, definitely not beings you want to mess with. There are also plenty of other characters from The Alliance and Horde. It will take a while to absorb everything since the book is really thick.

It's a great book for fantasy art lovers and artists, or for those who want to nail down that Blizzard art style to get work there.

Thank you for your review. :)
At approx. 10 Euros for a used book (that I hope is in good shape) this seems a lot of value for money.

Great review and great blog! How I hope Wizards of the Coasts can make a book for the arts of Magic the Gathering...