This is the updated review for the 2009 reprint. 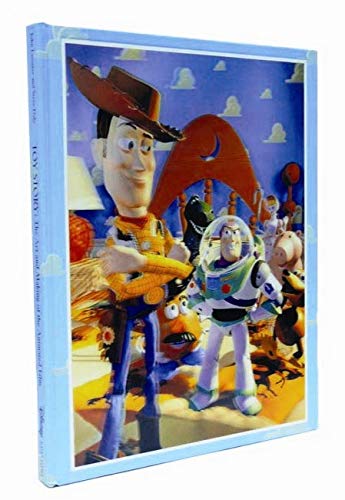 The first edition of this art book was published in 1995. After being out of print for more than a decade, Disney has finally decided to reprint it. I guess that's because of the Toy Story 3 which is coming out in 2010.

This book is only on the first Toy Story movie. To better relate to the book, it's recommended to watch the movie again since it was released so long ago.

The book measures about 18 inches diagonally, which is really big. On the hardcover is a hologram with the Toy Story gang in it. The message is clear — Toy Story's the world's first 3D movie. The huge canvas is laid out with storyboards, character designs and movie renders display. It's inspiring to see how they turn concept art into reality.

Text is written by John Lasseter, the director, and Steve Daly. Their commentary bring us behind the scenes into the production for the world's first 3d animated movie. You'll read about storytelling, challenges on overcoming computer limitations, creating the characters and other interesting stuff. I'm pretty amazed that Toy Story was made from around 2000 models!

Profiles for individual characters are included, namely for Woody, Buzz, Andy and other toys. Detailed explanation are given character development but the focus of the book is really on the storytelling. It's about how the form follows the function. For example, you'll get to understand how Rex's small forearms created his "cream puff" character, why Woody is a soft puppet and Buzz the cool spaceman. You'll understand why characters behave the way they do, and the impression they are trying to create in the audience. In essence, you'll see how Pixar breath life into these otherwise inanimate objects.

There are plenty of interesting quotes from the staff in the empty pockets of the pages. They provide tremendous depth and insight to the film's production. The concept behind everything used in the movie are explained, from the dialogue, characters, design to music. It's like working beside the animators in the studio.

If there's a message the book wants to bring across, it can probably be summed up by this quote from Joe Ranft:

If the story isn't there, all the breakthrough computer graphics in the world piled onto it won't matter. You'll have made a piece of passing fashion.

That is so true when you separate the CG movies that you enjoy from those that are just eye candy.

There's absolutely no different between this book and the 1st edition. So grab yours now before it goes out of print, again.

Bought this on amazon for a bargain price. I'm getting it tomorrow. :) I was wondering if this includes artwork from the second film, as I can only find this and the art of Toy Story 3.

@Danielle
This book has art from the first film only. Toy Story 3 has a bit on the second film.

Does the reprint also have the hologram cover or is it just on the first edition?

@John G
The reprint is with the holographic cover also.

I have the original book, it’s my prized possession!