How to choose a good pen display

This article will cover all the features to look out for when getting a pen display. I'm writing this based on my experience of having reviewed too many pen displays. If you need recommendations for specific brands, models, please compare the pros and cons from my long list of pen display reviews.

What is a pen display?

A pen display is essentially a monitor you can draw on with the stylus/pen provided.

To use a pen display, you have to connect it to a power source or a computer, either a desktop or laptop running Windows or MacOS.

The main selling point of getting a pen display is so that you can have access to all software on your computer.

Difference between a pen display and a pen tablet

A pen tablet is a drawing tablet without a display.

A pen tablet is also used for drawing but it does not have a display. You have to look at your monitor while you draw on the pen tablet. With a pen display, you draw directly on the monitor, and you can see your lines and art appear beneath the pen.

Pen tablets are significantly cheaper and you can get a really good one from US $50 to $100. Pen displays usually start from US $200 and prices can increase significantly depending on the pen display size and other features. Prices I mentioned are current at the time of this article.

Main selling point of pen tablets is the affordability and they don't take up much table space, or you may already have a display and don't want another one.

Features to look for in a pen display

Pen displays can range from 10-inches all the way up to 32-inches. The larger the pen display, the more expensive it is.

User interface elements such as menus, palettes, toolbars will take up space/resolution. So the actual drawing area you'll be left with will be smaller.

Smaller pen displays such as those 12-inch ones are, in my opinion, for people who either have limited budget, lack of table space or don't need to work on their pen displays for long periods of time.

You may see some pixelation with the user interface, such as text, icons, menus, but 1080P is still a very useable resolution. 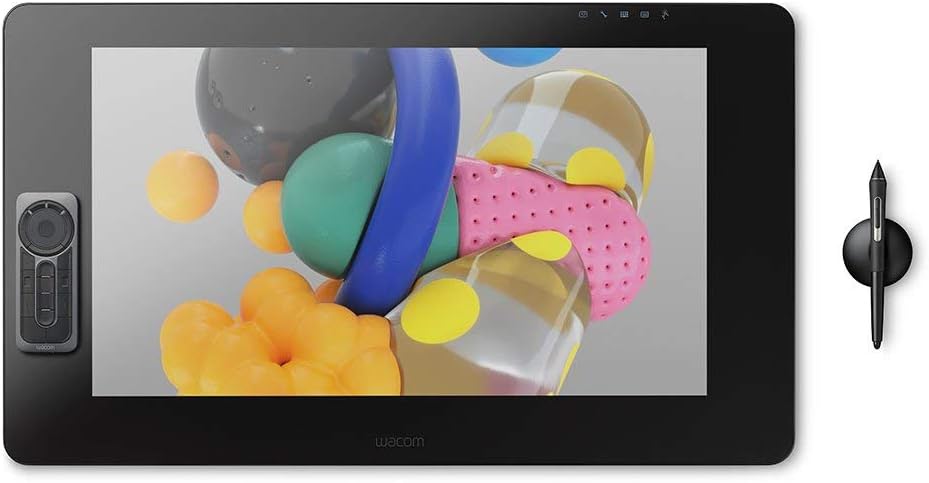 More resolution is good for productivity since you can place more user interface elements, eg palettes, and still have a good amount of drawing area, or you can have more windows open when you're not drawing. More resolution can mean sharper visual quality, depending on your screen size.

If you have the budget, getting a 1440P pen display would be terrific. But since 1080P models are significantly cheaper, those are more worth the money.

Try to get a pen display that supports (close to) 100% sRGB colour gamut. The colours will look more vibrant and more accurate. Good displays are those that use IPS LCD panels, and those have good viewing angles too.

If you need to compare your art with printed proofs, get pen displays that support (close to) 100% AdobeRGB. Some of Wacom Cintiqs are AdobeRGB displays but those are significantly more expensive.

Get a display that is bright, ones that are 200 nits of brighter.

In short, look for IPS LCD panels that support 100% sRGB and has good brightness (200 nits or higher).

Most pen displays nowadays come with a matte drawing surface that provides a more textured tactile experience for drawing.

The matte surface can come in two forms: matte screen protector or matte glass. The texture on both is quite similar.

Personally I'm not too fussy so I don't mind a few scratches on the matte screen protector if it means I can save more money.

Some matte surface have more aggressive anti-glare and can create this white "haze" when there are reflections. But as long as you don't have light source facing the display, it's not a problem.

When there is no gap between the pen tip and cursor, while drawing you'll see the line appear directly beneath the pen tip. It's as if you're drawing on paper.

For non-laminated display, you will see a gap between the cursor and the pen tip that's on the display. This cause parallax error and makes it more difficult to draw accurate, e.g. joining lines without gaps. Monitor calibration using the driver can configure the cursor to appear beneath the pen tip from where you look, but there will still be parallax because you can't always look from the same position.

The combination of a laminated display together with monitor calibration (for cursor tracking) makes the drawing process more accurate.

Cursor tracking accuracy near the edges of the pen display can vary.

Cursor tracking accuracy is something you have to rely on reviews to find out.

Pen displays may or may not come with physical shortcut buttons.

Those with shortcut buttons on both sides are great for right and left handed users.

For left handed users using pen displays with buttons on one side, you have make sure the driver allows you to change the orientation 180 degrees so that you can move the buttons to the other side. Not all drivers allow you to do that.

For those pen displays that don't come with shortcut buttons, you can always use your own keyboard for shortcuts because you will have to use a keyboard anyway.

Some models will come with a scroll wheel which allows you to change brush size, zoom or scroll easily and quickly.

Some Huion pen display has touch-sensitive stripe that you can swipe up and down to change brush size, zoom, or scroll. Scroll wheel is more convenient than such touch-stripes.

If there are no scroll wheel or touch-stripe, change brush size usually involves pressing the shortcut buttons many times. Usually, it's way faster to use your keyboard's [ and ] keys to change brush size because you can press and hold.

Look for pens that are not powered by battery and hence don't need to be charged.

It is not usual for pen tips to wobble slightly or have some movement when you're drawing. That movement does not affect drawing performance but getting a pen with a firm tip will provide better drawing experience. Huion pens that use PenTech 3, e.g. PW517 pen model, have rather firm tips that don't move much.

Note that pen displays only support specific pens. Pens are usually not interchangeable, not even if you are using the same brand of pen display.

Some pen displays have dedicated buttons where you can access the OSD menu, or change colour attributes such as brightness, contrast, colour temperature, gamma, RGB.

For pen displays without OSD menu, that functionality may be provided through the driver.

For MacOS users, you will want to get a pen display that has driver that allows you to adjust all those colour attributes. That's because monitor calibration through MacOS system preferences requires you to have access to brightness and contrast controls. Without OSD or driver adjustments for colours, finding a workaround to calibrate your pen displays on MacOS is very tedious and inconvenient.

Here are some driver features to look for.

If you use two or more monitors, make sure the driver has Display Switch (or whatever it's called) function that allow you to switch the cursor easily from one display to another.

If you're left handed, make sure the driver has option for you to change the orientation so that the physical shortcut buttons are on the other side. If your pen display has no shortcut buttons or has buttons on both sides then this is not a problem.

All drivers will allow you to adjust pen pressure. The better drivers allow you to move points to adjust the pressure curve with more accuracy rather than use a slider.

If the driver does not work well, do not assume the company will update the driver. It's best to get a pen display where the driver works properly out of the box, rather than wait for driver updates that may never come.

If you use specific drawing software, make sure the driver works well with that software you use. Basically make sure the lines taper well, there are no angular strokes when drawing curves, no stray strokes, no jitter.

Some pen displays have problem with tilt sensitivity. When the pen changes direction, e.g. left to right or up to down vice versa, there can be a break with the stroke.

Why not just get an iPad or Samsung tablet?

My general advice has always been to get the device base on the software you want to use.

Pen display gives you access to your desktop software. There are some desktop software that have been ported over but most of them are the mobile version and not the actual desktop software. Photoshop, Illustrator and Lightroom on iPadOS isn't the same thing as their desktop versions. You can probably get the same work done, but the workflow is going to be different. Not sure about you but I am many times more efficient when working on a desktop with a keyboard and mouse.

Advantage of iPad and Samsung Galaxy tablets for drawing is they are portable. There are also many good drawing apps from the Apple App Store and Google Play Store. So if you don't specifically need to use desktop software, getting a tablet is a good option.

Most companies offer just one year of warranty. Some companies do offer warranty extension but at extra cost.

XP-Pen is the only company that offers 18-months of warranty for their product.

It's also important to go online to forums, Reddit and Twitter to research the quality of the aftersales customer services.

Because there are so many companies, prices for pen displays are actually quite competitive. Nowadays you can really get plenty of value for your money. Wacom used to be the brand to go for but quality of products from other companies is getting better every years.

There are so many new pen displays released each year from the brands I've mentioned that it's kinda difficult to keep track. Consumers are the ones to gain from all these competition because of the fierce competition between companies.

Anyway, to find detailed reviews, you can search Amazon, Reddit, and definitely check out the ones I've reviewed on my blog at https://www.parkablogs.com/tags/pen-display

Greetings, I've been contemplating whether If I should get Innovator 16 or the Huion Kamvas 16.

I don't mind the price difference, but the experience and smooth workflow are the ones I'm wondering which is worth it between those two...

@Cath C.
The Huion has a slightly better pen. Innovator has 18 months warranty.
Other than that, they are quite evenly matched.