If you are an artist who wants a pen that gives lots of line variation and expression when drawing, you might like the Duke Confucius Compound Art Fountain Pen

The Duke pen comes in a heavy (685g) lavish wooden box measuring 21cm by 13.2cm by 5cm. This increases the shipping costs so you might consider this a minus if you don’t care about receiving a box with your pen. But shipping costs aside, the box does create the impression that this is a pen fit for an emperor or some master calligraphy master to wield.

The cover has a drawing of Confucius. It’s carpeted inside and it presents you with the pen (with a convertor included), a bottle of ink, and a plastic cartridge under the pen.

It's a heavy pen, but in a good way. It looks well-made overall, well balanced without the cap. You cannot cap this pen as it won’t really fit well. On the section are the words “King Crown”. The barrel has a woodgrain pattern. It could be bamboo or real wood, but I can’t tell. But it is matt and feels comfortable to the touch. The convertor has the words “DUKE GERMANY” on it. Made in Germany? I don’t know. 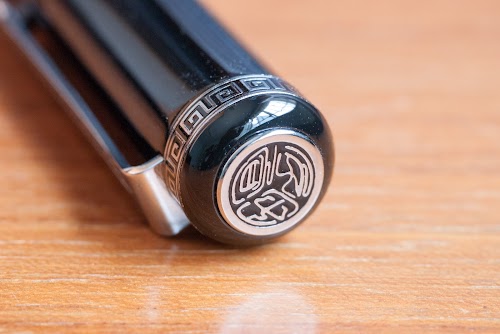 Most importantly, the pen has a very unique nib. That is the main reason whey I got this pen. It has 3 tines (The 3 metal "fingers" at the nib tip) , resembling a music nib. But it is bent like a fude or Hero curved nib fountain pen. On the top of the nib is a reservoir for ink to collect. The bent nib is longer than any pen I’ve seen having that feature before.

The tines on my nib aren’t exactly equal in width and I’ve seen other reviews that mentioned that you may not always get a pen with the tines all equal. I guess that’s a minus when it comes to quality control. But still, I cannot say that it affected the flow or the enjoyment of this pen in any way. It still worked perfectly fine with this small flaw.

(I tried emailing the seller “Bertram’s Inkwell” about giving me a replacement. But they never replied. So if you are picky about the tines being perfectly equal in width, I’d suggest writing in to the seller before you’ve bought the pen to check up on it, if possible. If not, it’s not something you need worry about as it will work fine.)

DRAWING WITH THE CONFUCIUS PEN

So how does it perform? Amazingly well!

Line variation: XF to BBBB (or whatever 4mm+ is)

That’s a HUGE line variation. I think that because the nib tip is so far from the feed and it is bent, the ink flow is minimal (or dry) when you just draw with the tip. So that’s why you get a line that is extra fine. (Don't expect a wet line for the thinnest line.)

Comparatively, this is much finer than what I could get with a Hero curved nib fountain pen. So although it can create broad monster lines, it can also handle the very fine details. That's the best of both worlds. Not all curved nib/fude pens are able to get these extremes.

Turning the nib on its back doesn’t make much different from the front. They both produce a super thin line.

But when you let the entire flat part of the nib come into contract with the paper, you get a broad wet line. This is great for colouring in big patches areas of with ink. This is double the size of what you get with a Hero 578 or 86 (Curved nib). The line variation you get with the Confucius is very pronounced. It trumps a curved nib Hero 578 or 86 hands down. And I think you’ll have lots of fun with this.

I didn’t get too much kick out of writing with it, though. It isn’t incredibly smooth writing on the tip end. Nor is it scratchy. It’s alright. I personally think that a flex pen creates nicer writing. But that’s just me. I’d use this pen primarily for drawing.

If you are new to curved nib pens, this is how they work: You tilt the pen forward to get a thinner line and backward to get a fatter line. If the tilt is somewhere in between, you can an in-between line width. You rock the nib back and forth as you draw. True that it isn’t the same as a flex pen. It won’t give you the same type of lines as a flex pen and It uses a different way of giving you line variation. But the line it produces has it’s own kind of beauty.

Cartridge ink: The ink that comes with in the cartridge and bottle almost feels like chinese ink. But it is fountain pen ink. It's not too wet and not too dry. Maybe on the drier side. It's a bit purplish. And when you apply water over it, it will bleed but it will not wash off completely. I tried other inks in this pen as well as you can see. (Private Reserve Ebony blue mixed with Pelikan Brilliant brown for example.) I wasn’t successful in trying to disassembling the nib from the section and feed for thorough washing, so I’d recommending washing the pen out every couple weeks to avoid clogs, especially if you are using waterproof inks like Platinum Carbon Black.

Reservior on nib: So what’s the reservoir on the nib for if it isn’t a dip pen? There are no instructions on that. But when I’m using the convertor in the pen and I twist to push ink out into the pen, the reservoir fills up with ink. This increases the flow of the pen. With the reservoir filled with some ink, the lines become very wet and swooshy! Of course, this will make your XF line rather fat. But I thought this is a neat function, giving me the option of very wet strokes if I wanted.

FINAL THOUGHTS
This pen stands out among my other pens because it can create lines other pens can’t.

I highly recommend this pen if you want a pen that will shake up your drawing style and give you more expressive lines.

The price is somewhere between an expensive pen and a cheap one. Judging from the feel of the pen and what it can do I'd say it is worth what it costs.

Get this pen on Amazon: www.amazon.com/Duke-Compound-Art-Fountain-Pen/dp/B007E04O1A

@Tony Ang
You can find them on eBay. Look for sellers that provide free shipping.