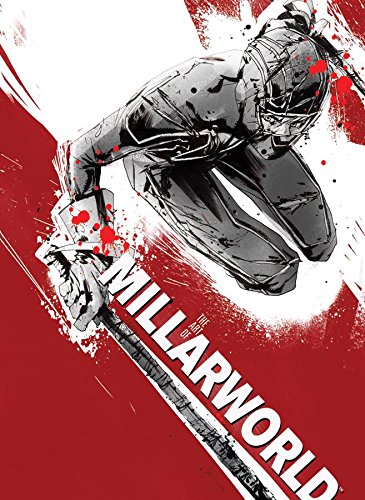 The Art of Millarworld is a fantastic art compilation of all the creator-owned titles Mark Millar and various artists have created.

That's ten titles in this 200-page hardcover artbook. By the way, there's also a signed and limited edition of this book.

The art is great and I like the variety of styles because of the large number of artists included. Yes, you have the main artists drawing the titles they are known for, e.g. JG Jones for Wanted, Steve McNiven for Nemesis, Leinil Yu's Superior, Dave Gibbons and The Secret Service, and of course John Romita Jr for Kick-Ass and Hit-Girl.

In addition to the main artists, guest artists also to chip in occasionally and we get to see their style as applied to the characters. Tommy Lee Edwards and Frank Cho contributed alternative covers to The War Heroes, and Adam Hughes, David Mack and Leinil Yu drew Hit-Girl. Other artists included Bryan Hitch, Marc Silvestri, John Cassady and many more. There are over 30 artists whose artworks are included.

Each main artist also has a short Q&A talking about the project and how they came to work with Mark Millar.

It's a great run for Mark Millar since Wanted first appeared in 2004.

This is a nice artbook that looks back the titles from the last decade.