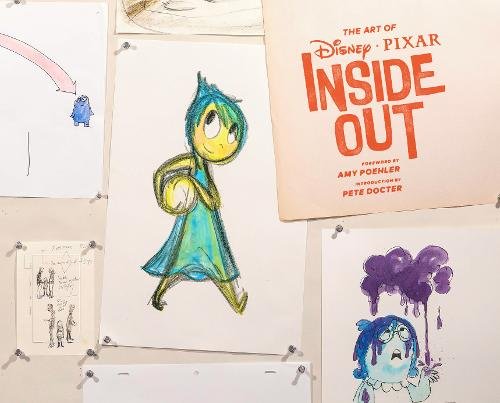 Unlike other Pixar films, Inside Out deals with something rather abstract like emotions. So how do you use art to represent that. Well, you get to see just that in this artbook.

The book collects the concept art for the film. There are sketches and coloured illustrations of the characters, places and fantasy landscapes. The artworks are beautiful and nice, but can also be abstract at times, such as for the imaginary landscapes, so I really prefer those with more details fleshed out. The main artists whose work you'll see a lot are from Ronnie Del Carmen, Ralph Eggleston and Don Shank.

The downside of the book is the presentation style. I feel that it's unnecessary to blow up simple sketches to full page sizes. Sometimes it works, sometimes, it doesn't. And when it doesn't, it feels like it's trying to fill space. I found myself flipping through several pages with just a single sketch on it rather quickly because they just don't have enough details to hold attention. Whereas I would pause and admire the more detailed pieces.

There's quite a lot of white space in the book that could have been filled by commentary. Or the simple sketches could have been scaled down to allow more artworks to be included. There's no commentary other than the foreword by Amy Poehler and introduction by Pete Docter. Some text talking about the design would have added so much more depth to the book. There are some captions that describe the art, but more often than not there are none. I find it very confusing that they don't label who some of the characters are.

The Art of Inside Out feels lacking. I was looking back at the last four Pixar artbooks for Monsters University, Brave, Cars 2 and Toy Story 3 and they were all more substantial, with much more artworks and interesting commentary from the artists and staff.

Another downside is the lack of order. I wasn't able to perceive any type of categorisation. Usually, artbooks would group designs for characters, environments, props, effects separately. Some books would choose to present the art chronologically as they appear in the film. The artworks in this book feels jumbled up in no particular order. And it doesn't help that the captions are sometimes missing. All the artworks are credited to specific artists though.

It's probably not surprising that there's not even an author listed. I guess nobody wants to take credit for this book.

So overall, this book is a mixed bag to me. I would have expected something better coming from Pixar. If you have owned other Pixar artbooks, you'll be able to see clearly that the other books are better.