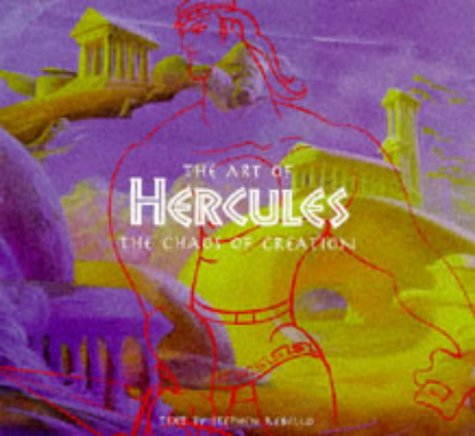 Here's another oversized art book for one of Disney's traditional animated film, Hercules. It's directed by Ron Clements and John Musker.

This book is filled with character designs, storyboards and production stories. The variety of character design is really great, contributed by amazing artists including the directors themselves. There are the paint, pencil, ink and watercolour. The character sketches are really a delight to look at.

There's plenty of writeup also, which come in the form of interviews and quotes from the production crew, talking about the artistic style of the movies, the characters and, well, the directors.

It's really interesting to see Disney's doing their own style for Greek mythology, a refreshing contrast of comedic caricatures versus the solid Greek statues and drawings we've grown accustomed to. Behind the front cover, there's an illustration of the typical column art with Greeks fighting, and inside the back the cover, it's the same illustration but this time all the soldiers have smiley faces on them. I though that was brilliant and hilarious.

The Art of Hercules is a beautiful art book well worth the money, especially for the character art.

Places to get The Art of Hercules: The Chaos of Creation:
Amazon.com | Amazon.ca | Amazon.co.uk | Amazon.fr | Amazon.de | Amazon.co.jp | Bookdepository.com

This is really nice artwork , You can see a lot of time has been spent on it.