The first generation of Adonit Dash had potential but it did not live up to my expectations. The second generation has surprised me with its improvement. The stylus that I'm reviewing today is provided by Adonit.

Highlight of this stylus is the 1.9mm tip. With a tip this small, you can write or draw without the tip blocking the line beneath.

Unfortunately, the tip still wobble slightly when in contact with the screen. I said "still" because there are other Adonit styluses with tips that are designed this way. I always thought that the wobbly tip has something to do with pressure sensitivity however this stylus does not support pressure sensitivity. There's also another stylus released recently called the Adonit Snap that also features the 1.9mm tip but there's no wobble there. So I wonder why the tip has to wobble with Dash 2.

On the left is the 1st gen Dash. Dash 2 has a gap between the tip holder and the body.

The metallic body is solid and matte surface finishing looks good. You can choose from three colours: black, silver and bronze.

The stylus also comes with a clip.

The diameter is quite similar to a wooden pencil and the weight is 12g which is quite lightweight. 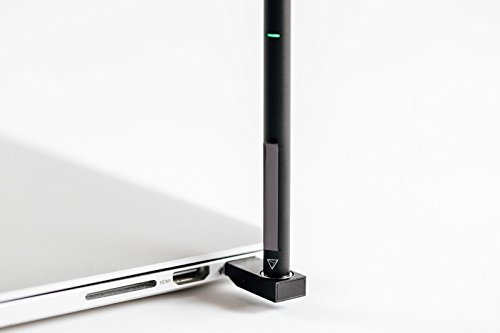 I don't like the thumb drive charger. I would have preferred charging through micro-USB because those cables are almost ubiquitous.

Battery life is rated to last 14 hours. Unless you draw 14 hours straight, that's ample battery life in my opinion.

Quality of the battery is questionable. The 1st generation Dash that I've reviewed almost one year ago can no longer charge with the USB charger. I don't know if it's a problem with the stylus or charger. But that's not the only Adonit stylus that I have that had battery issues so I felt I had to mention it here.

Once you click the power button on the back, the stylus switches on instantly. You'll see the green indicator light flash.

Dash 2 is an active stylus that's designed to work with any touchscreen devices. The fact that it does not need Bluetooth connection is convenient because after you switch it on, you don't have to waste time waiting for your device to find it.

Below are apps that I've tried with the stylus. Unless otherwise mentioned, they are all iOS apps.

Note that I'm using the iPad Pro. I've read comments saying that the stylus still exhibits wavy diagonal lines on some other tablets.

When using this stylus, I test for accuracy and responsiveness. There's no pressure sensitivity and no palm rejection.

Overall, the accuracy is quite good and misalignment is not a big problem. Accuracy also depends on how you hold the stylus. With my normal handwriting position, I can see that the lines come out just beneath the tip. If the stylus is tiled more horizontally, then the line will appear around 2-3mm away.

As for responsiveness, it depends a lot on the app used. Most apps I use are quite responsive and lines come out with minimal lag. Procreate and FiftyThree Paper have some lag but not a big issue. Those two apps are best used with Adonit Pixel and FiftyThree Pencil respectively.

In short, the performance depends on the app you use.

Is the diagonal jitter still there?

One significant improvement over the 1st generation Dash is that Adonit has minimized the slow-diagonal-line-jitter issue. Drawing diagonal lines slowly no longer produces obviously wavy lines, however there's still slight jitter if you are looking for it. The jitter issue can be considered a deal-breaker in the earlier model but with Dash 2, it's no longer a significant problem.

This was drawn on Wacom Bamboo Paper. I managed to join all the lines effortlessly without much misalignment issues. The diagonal strokes are drawn very slowly. The jitter is not obvious and this is great because the 1st gen Dash had serious issues with jitter.

Here's the jitter comparison between Snap, Dash 1 and Dash 2.

Overall, I'm quite satisfied with Dash 2. It works well on most drawing apps. With handwriting apps, it really depends on which one you're using.

The diagonal-line-jitter problem is almost gone which is a significant improvement to me.

The other downside to me is the quality of battery, but that is something I can only know in the future.

So with this model, I can now say it's good enough that I can recommend to note takers and artists who don't need pressure sensitivity.

Pros and cons at a glance
+ Beautiful design
+ Small, light and portable
+ Works well with most apps
+ Does not require Bluetooth for writing/drawing
+ 1.9mm tip does not block the lines that come out beneath
+ Slow-diagonal-line-jitter significantly minimized
- Potential battery longevity issue

You can find the Adonit Dash 2 on Amazon through the links below:
Amazon.com | Amazon.ca | Amazon.co.uk | Amazon.de | Amazon.fr | Amazon.it | Amazon.es | Amazon.co.jp

hey, since this pen has no palm rejection and as you said is good for writing notes, is it still comfortable to write without putting your palm on the screen for long term use?

@carine
I find writing to be a bit awkward without palm rejection. Especially so for writing a long period of time.﻿