This review is written by a guest artist Dan Nelson. 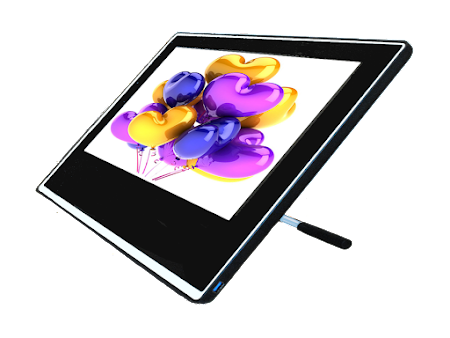 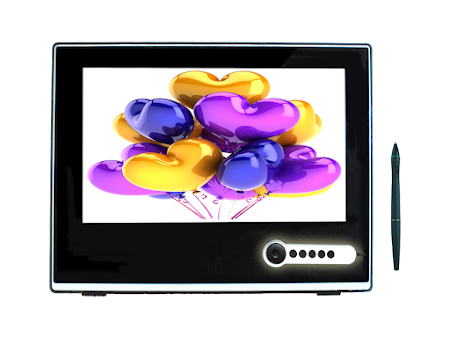 Hi everyone, today I’ll be reviewing a new Yiynova tablet monitor, the MVP20U+RH.

Over the course of a few years, I’d been looking at a variety of digital tablet monitors. Having used a Wacom Graphire tablet for over a decade, and reading various reviews of other Wacom products, I knew that Wacom’s products generally had great reliability. However, I really wanted to lose the disconnect that comes from drawing on a tablet while looking up at a screen, and feel more connected to whatever artworks I was creating.

Before purchasing this tablet, the only drawing on a screen using a stylus experience I’d had was with my phone, a Samsung Galaxy Note3, using Sketchbook for Android. It works great, especially when traveling, but I really wanted more screen space and to be able to use a full version of a drawing program.

In looking at tablet monitors, the Wacom 22HD seemed a logical choice (screen larger than 13”, smaller than 24”, Wacom reliability), yet I could not justify spending that much on a tablet (reduced this year to $1799 USD). From researching various tablet monitors through several art and technology blogs, I observed that there were several Chinese companies making tablet monitors that performed the same functions as the Wacom Cintiq, for far less money.

Enter the new Yiynova MVP20U+RH. This monitor has a 19.5” diagonal SMVA panel under the front glass. I had considered the new MVP22U+RH with its 21.5” IPS panel, but after considering the size, where Yiynova’s tablet monitor technology is at the moment, and the pricing, decided on the MVP20U+RH. 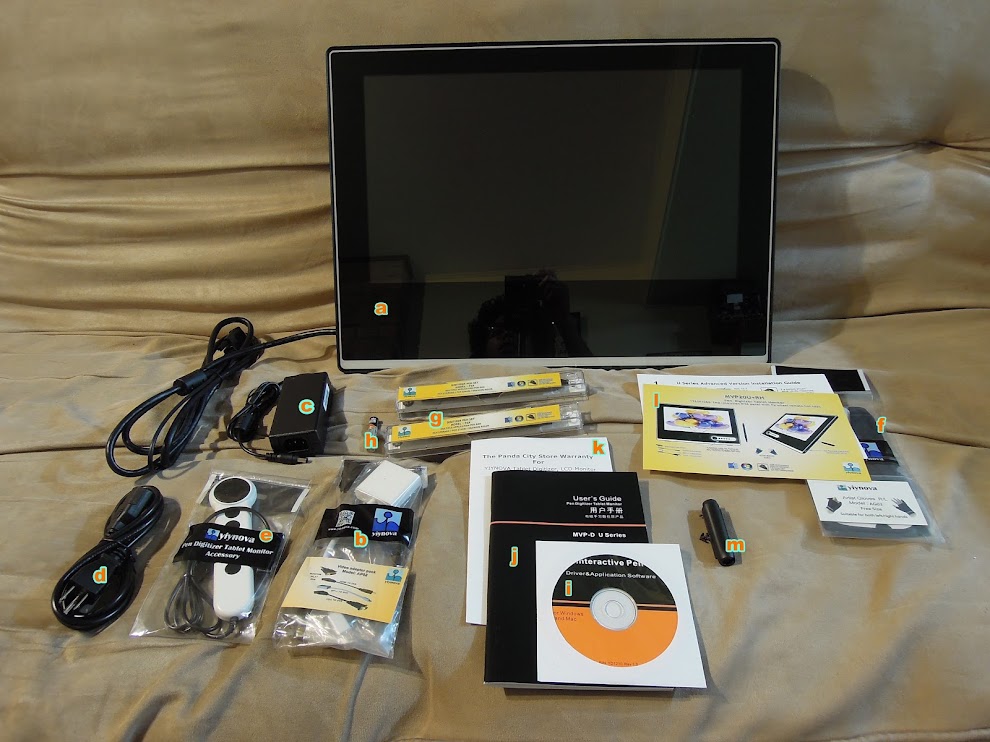 Included in the box are:

Before installing the Yiynova tablet drivers, I deleted all Wacom drivers from my laptop, as is recommended in the Yiynova installation guide. Once done, I installed the driver for Mac onto my laptop and rebooted the system. After doing so, I went to Yiynova’s website and installed the latest Mac driver ( the drivers on the CD were already surpassed by newer driver versions) and restarted the computer again, just to be sure. Then, I plugged in the MVP20U+RH and turned on the monitor. 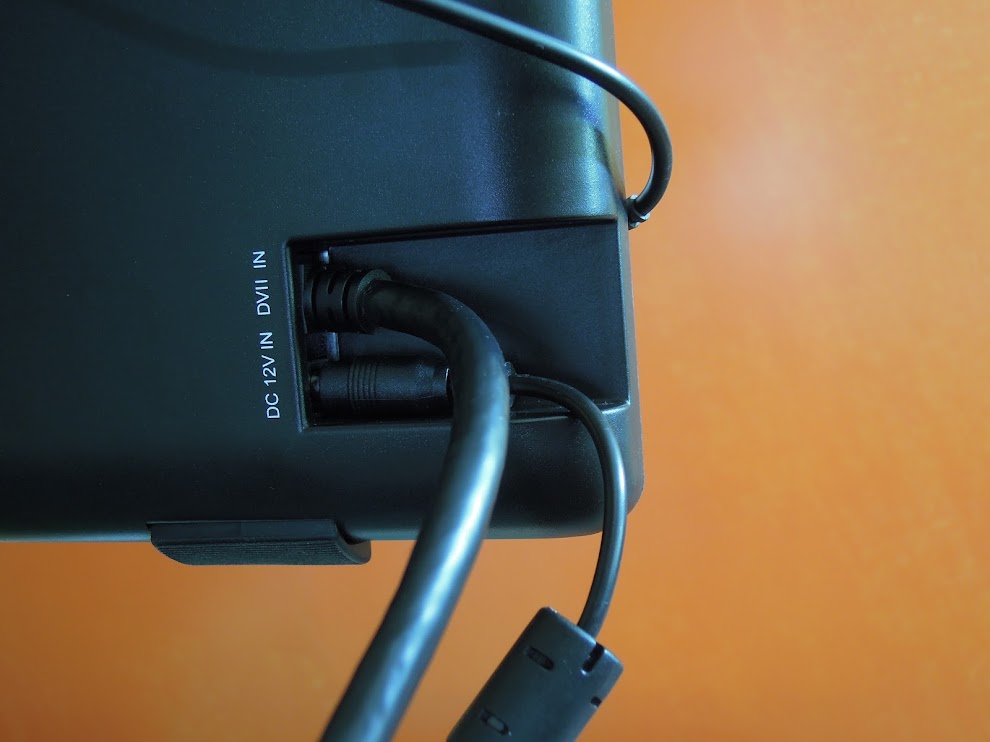 A look at the unremovable DVI IN cable, as well as the 12V connector from the power brick. Cables attach at the sides to keep them out of the way on a desk. One of the two rubber feet on the monitor base to keep it from sliding on a desk can be seen at bottom left

Calibrating the screen and pen was relatively straightforward. There was a screen test where one touched various targets on the screen to calibrate the pen, and a section where one could program the various buttons on the RemoteHotkey. I’ve kept the scroll wheel (for zooming in or out) and page up and down buttons active, as those are the ones I’ve found most useful.

The laptop didn’t automatically set the tablet monitor up as a second screen, just an extension of my laptops’s screen instead. Of course, you can drag your workspace palettes over from the laptop screen onto the Yiynova screen, but then if you have to find various files, you have to switch from the pen to the laptop trackpad to find anything in a folder on the desktop. The menu bar at the top can be dragged over to the Yiynova in the Apple System Preferences Displays section. However, it doesn’t go back to the laptop screen by default if the tablet monitor is turned off.

Tablet monitor being used as extension of current laptop screen, with program palettes and windows moved onto the Yiynova

Selecting “Mirror Displays” in the Apple System Preferences ‘Displays’ section turns the Yiynova into a second screen of your desktop, complete with files, folders, and dock. Doing this ensures that you don’t need to look at your laptop’s screen at all, everything you need is mirrored exactly on the tablet monitor. There’s a bit of an oddity, where since my laptop screen is 1900x1200 and the Yiynova is 1900x1080, the screen of the laptop shrinks by about an inch combined with empty space on the top and bottom of the screen to match the lower resolution of the tablet monitor. Not a major issue, just a bit of an inconvenience to have to go turn off the “Mirror Screen” option when I’m not using the Yiynova.

The stand attached to the Yiynova appears to be the same stand used in the Huion, and Ugee tablet monitors as well. It works well enough to stand the monitor up on a desk, but since I planned on mounting it to a monitor arm, I took the stand off. The MVP20U+RH will fit the VESA 75 mounting points on a monitor arm. However, the screws supplied with the arm (mine’s by VIVO) while the right length, were too thick for the holes in the back of the monitor. I used the screws from the Yiynova stand to attach the tablet to the arm mount, as I didn’t want to drill larger holes in the back of the monitor.

You can see the pen holder, along with the VESA mount where the stand used to be. The buttons at left control the monitor and any menu specific functions. Power On/Off, Menu, Up, Down, Exit

Closer look at the RemoteHotKey, as well as that fantastic front screen

The surface is smooth glass, and the construction is similar to that of the MVP22U (all versions) i.e., a glass front set into a plastic base, with six visible molded clips holding the display in place. Like its larger twin, there’s an active/standby light in the middle of the panel, where there is no drawing screen. Visually, if the front was all white, instead of black with a white border, this tablet could easily be mistaken for the MVP22U+RH.

The drawing pens included are both the same model, so I’ve kept one as a spare. With the drawing glove, your hand slides over the glass screen without sticking, great for dramatic strokes. The pen’s pressure sensitivity results in brush strokes going from very light to heavy in a smooth manner, depending on how much pressure you are pressing down with on the pen’s point.

Parallax - when drawing normally it’s not really noticeable - bring your face almost level with the edge of the glass and then it becomes apparent. Pen is touching glass in image on the right

There’s a bit of parallax, but that’s to be expected. For the majority of the time, the cursor lines up exactly with the pen’s point when it’s touching the screen. The only time it doesn’t is when one is either quickly covering a large surface area, or making a large amount of strokes very rapidly. Then, the cursor onscreen lags behind the physical pen’s point by a few millimeters. It’s a visual difference, but it doesn’t affect the actual onscreen drawing experience enough for me to not recommend this tablet.

The tablet’s SMVA panel maintains even color throughout the drawing process, whether one has the tablet almost flat infront of them, or, like I often do, stand and draw with the monitor at an almost 36 degree angle. The only time the panel changes color is if one has rotated the panel on its axis (via the VESA mount) from a flat horizontal position to about 45 degrees left or right, and at the same time has the monitor angled towards themselves at almost 90 degrees. Then, there’s a warm color shift. However, that’s the only extreme occurrence that seems to result in non accurate colors.

Pretty much the only extreme angle that will cause the SMVA panel to color shift- Draw while standing, have the monitor at nearly 90 degrees, and rotated up to 45 degrees

When drawing with virtual pens, paints, and various brushes, the Yiynova really shines. With some changes to the brush density/opacity within the drawing program, one can easily replicate actual drawing or painting materials with various drawing pressure with the pen. It’s simply amazing to observe, and the results for line art are often like drawing on paper with a pencil or pen. When painting digitally, with an oil brush, it’s like one really is painting in oils ( especially if you are putting multiple shades of color within the same layer) without the solvents, mess, and the option to undo mistakes with a simple command.

In conclusion, I would recommend this tablet monitor to anyone who has seen or heard of Wacom’s Cintiq line, but balked at the enormous markup in price.

The Yiynova MVP20U+RH fills the gap that existed near the top of Yiynova’s tablet monitor range. Before, if one wanted a decent sized tablet monitor there was the MSP19U ( that uses older technology and a TFT screen) and the MVP22U+RH (using Yiynova’s latest technology and with an IPS panel screen) which while significantly less than a Wacom of equal size, might have been out of the price range for some. Now, one can sacrifice an inch and a half of screen space and save a decent amount of money, and still buy a tablet monitor that is fantastic to work off of, and view artwork on.

The Graphire? It’s being packed away for a well deserved retirement.

You can find the Yiynova MVP20U+RH on Amazon.com | Amazon.co.uk