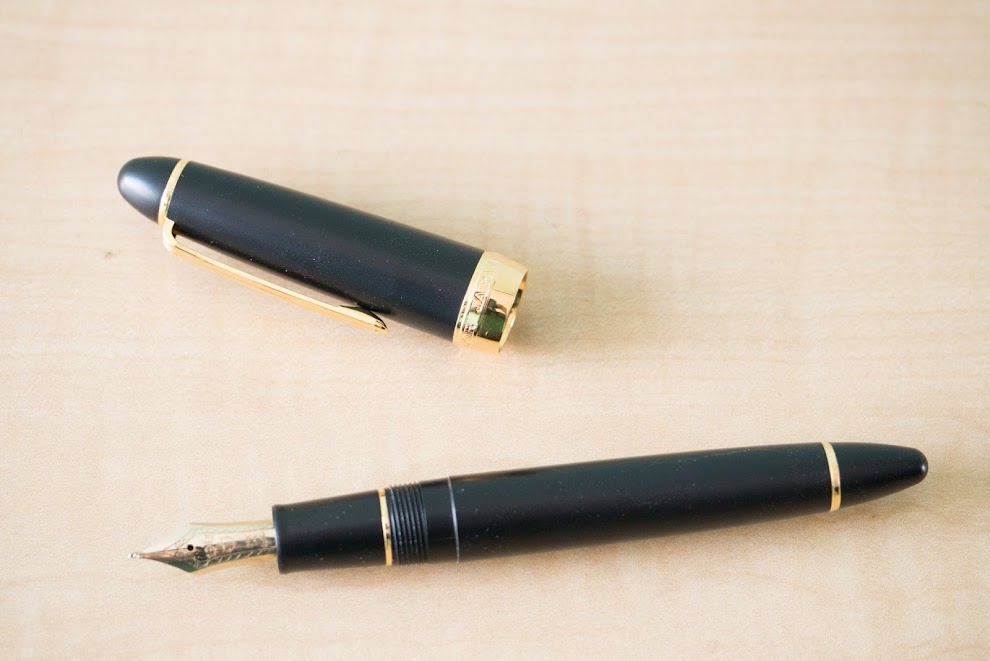 This particular pen is not to be confused with the two Sailor Fude DE Mannen fountain pens or the Sailor MY FIRST that I've reviewed recently.

So what's the different?

This particular nib belongs to the Naginata series of specialty nib produced by Sailor. A naginata is a long sword that consists of a wooden shaft with a curved blade on the end. For the pen, we have a long nib attached to the body, a 1911 full size in this case. 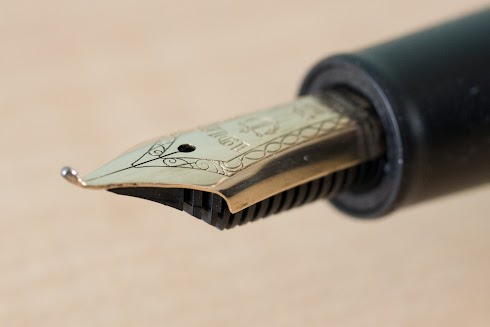 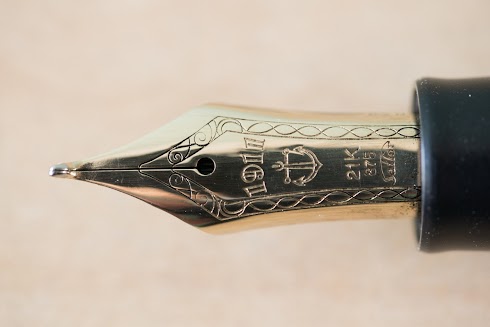 A Fude nib is a bent nib designed for Chinese or Japanese calligraphy or words. Because they are bent, in addition to the point nib, they have a curved portion of the nib with larger contact surface. This means they are capable of producing strokes of varying thickness depending on how you hold the pen.

For the Naginata Fude, the stroke thickness also varies depending on the pressure you use. It's not a flex nib but it does react to slight pressure differences. See the sketches below for examples. 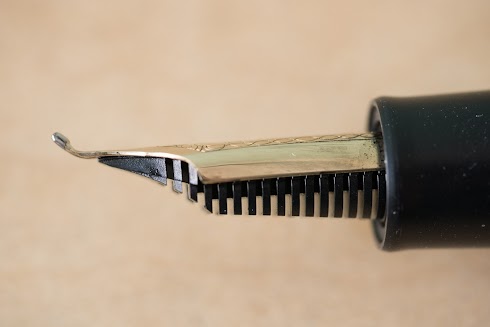 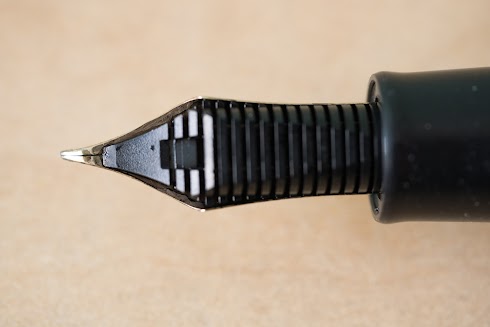 The Naginata is bent at around 30 degrees, judging by eye. It has a smooth bent unlike the Sailor Fude DE Mannen and MY First fountain pens which are bent quite sharply. The result is the nib works well on any type of paper surface. If you're read my review for the other Sailor Fude nib pens, you'll find that I don't particularly like how they handle themselves on some paper — sometimes the ink doesn't flow and it's definitely not the fault of the paper.

The Naginata Fude works wonderfully on either smooth or rough paper. On rough paper, you'll get more textured strokes.

The feed system is standard Sailor feed. Ink flows well despite that the nib puts out a lot of ink when creating the broad 1mm strokes. 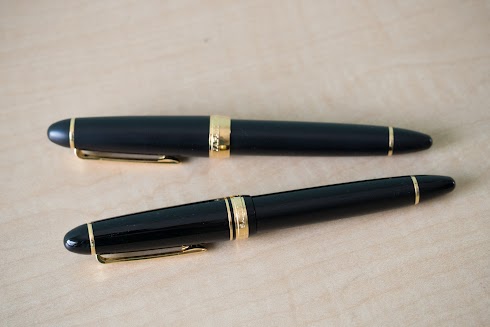 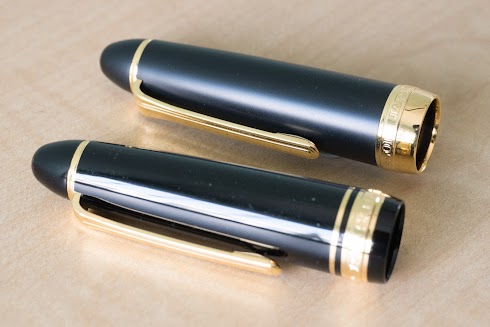 I got mine with a matte body which on hindsight, I should have just gone for the usual glossy one because I don't feel that the matte version cost an extra $100 for the price Nibs.com is selling at. For that money, you can almost get a coloured Sailor 1911 glossy body.

Even the grip section is matte. I frequently interchange the nib and and grip with other Sailor bodies and now the matte grip looks weird with the glossy bodies. 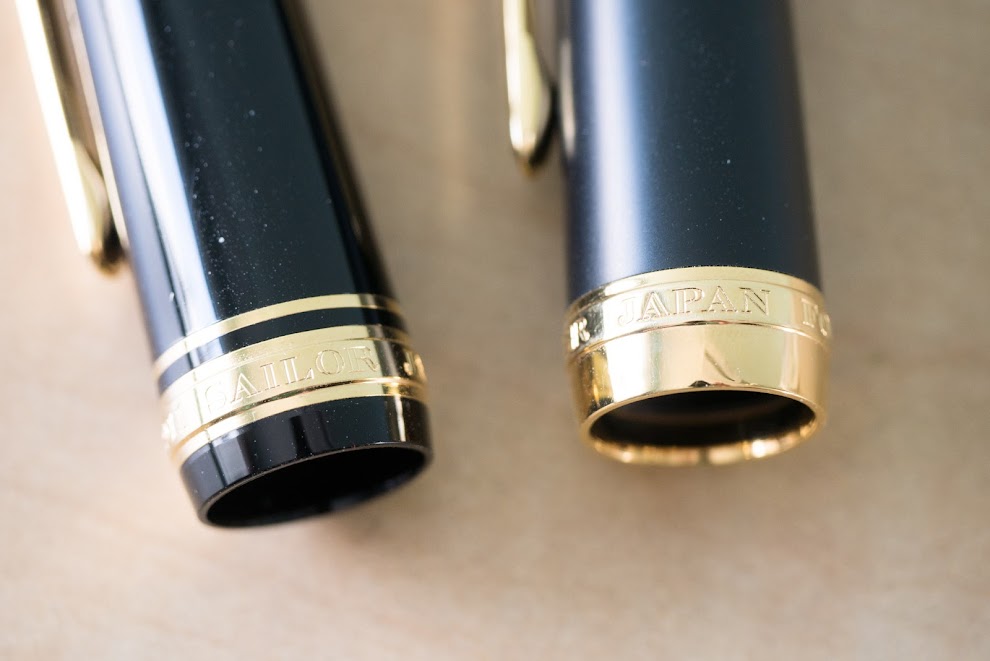 The bottom of the cap has a larger portion with more gold trimmings. I don't even see that on my Sailor Cross Emperor. Maybe because I had opted for the non-standard matte version body. It's nice though. A bit different from the other Sailor caps and body. But the price is a bit hard to swallow. 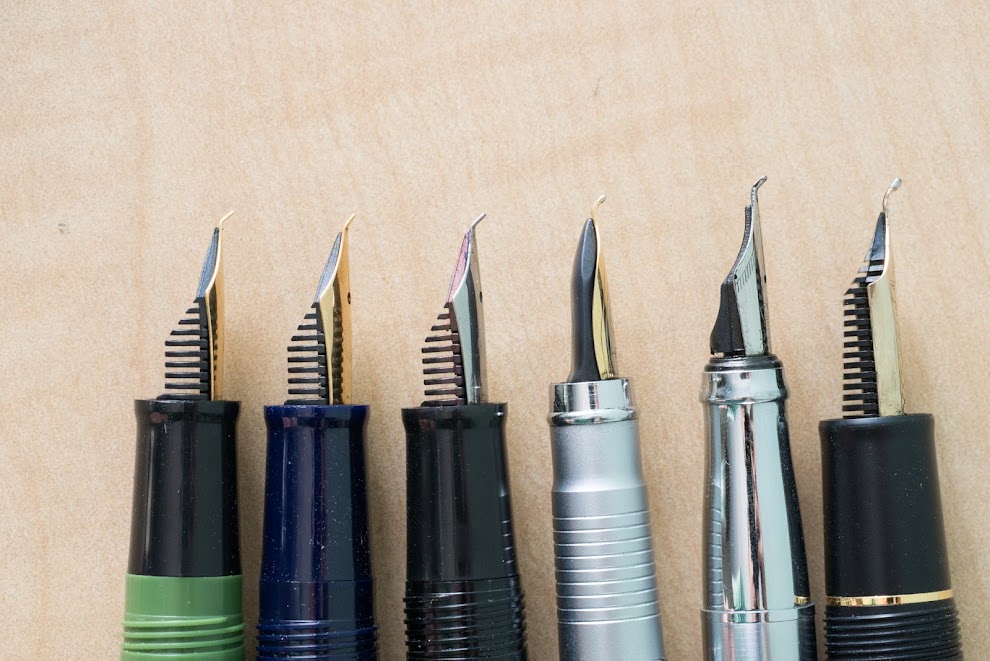 Here are the different Fude nib pens that I currently have. From left to right we have

I once had the Duke Confucius Compound Art fountain pen which also has a Fude but don't have it now for the photo. That's also a pretty crazy Fude nib pen.

By the way, the price of the Sailor Naginata Fude nib with standard 1911 body cost $357 on Nibs.com. That means this pen cost more than all the other Fude pens mentioned above combined. WHAT?!?

On eBay, there are much cheaper Sailor Fude pens with 1911 bodies. Those pens in the USD $20-$60 region have bodies made of more lightweight plastic (such as the one you see in the Sailor Brush Pen) and the nibs are bent too sharply. You'll be better off buying a Duke or Hero pens for their smoother Fude nib.

On the top left, I want to bring attention to the three thickness of strokes that the Naginata Fude can produce. Using minimal pressure with the tip, you can get rather thin lines. Apply a bit more pressure to the tip and you'll get broader strokes. Using the curve area of the nib, you'll get the thickest strokes. It's impressive.

The Sailor Zoom nib is more of a medium to broad nib with minimal variation to stroke thickness.

Sailor Cross Emperor nib can also produce three thickness. However for the thin stroke, you've to use the nib upside down or with the pen totally vertical. The ink flow is much better with the Cross Emperor and the lines are darker even with the same ink I used, Noodler's Bulletproof Black ink in this case.

The cheaper Duke 209 with Fude nib is also quite capable of producing varying thickness, just not as obvious as the Sailor Naginata Fude especially for the really thin strokes.

Here are two sketches with the Naginata Fude on smooth cartridge paper.

On the same paper, I compared the Naginata Fude with the Cross Emperor. The Cross Emperor has thicker and bolder strokes because of the ink flow and nib, while the Fude has more obvious thin and thick strokes.

I would consider this another fantastic sketching pen because of the varying stroke thickness it can produce which are even more obvious than the more expensive Sailor Cross Emperor.

There's really no downside to this pen except the expensive price tag of over USD $300.

For lesser budget, you can get a Duke 209 or Hero pens with Fude nibs. While the cheaper pens don't give you the more extreme pronounced stroke differences compared to the Naginata Fude, they are much more value for money.