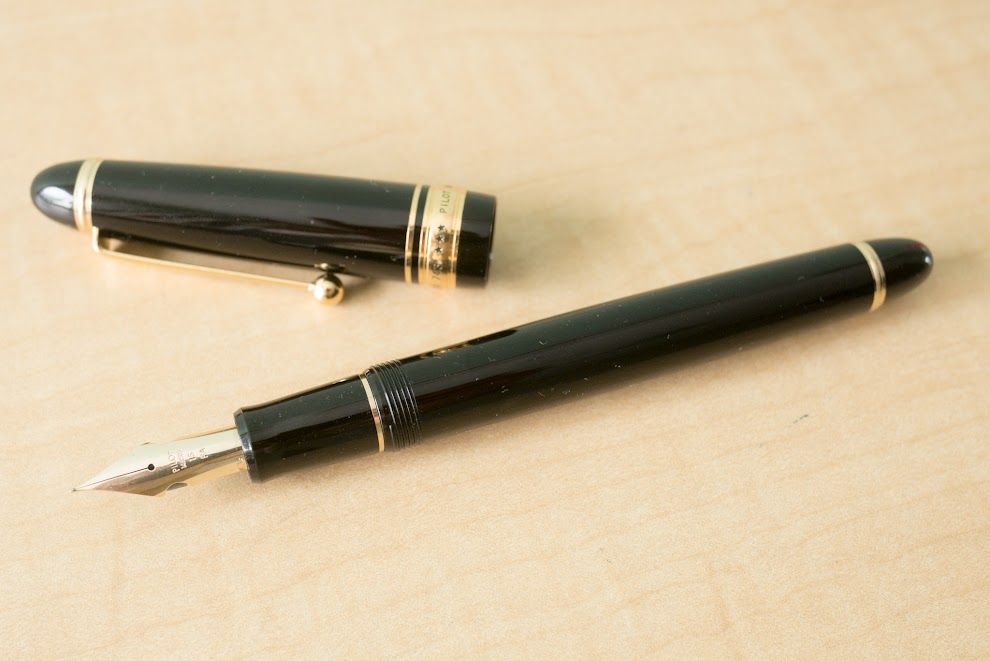 The CUSTOM series of pens from Pilot are designed to provide the best quality in writing. This particular CUSTOM 74 was designed in 1974.

The pen has the classy gloss black body with gold-coloured trimmings. Design is simple enough and almost impossible to differentiate against competition, such as against the Sailor fountain pens that I love.

It's a medium to large pen measuring 14.5cm with the cap and 13cm without. The top and ends are rounded off.

The body tapers to both sides from the middle. Personally, I find that a bit unusual because most pens that I have taper to both ends at the intersection between the grip and body. It's a minor difference but it can be seen and felt. 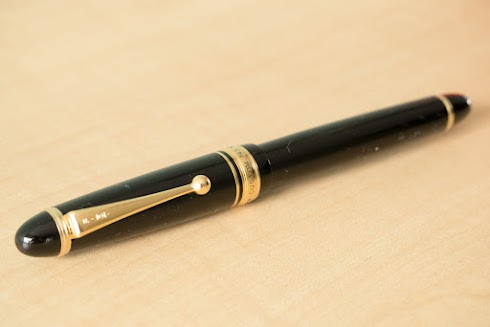 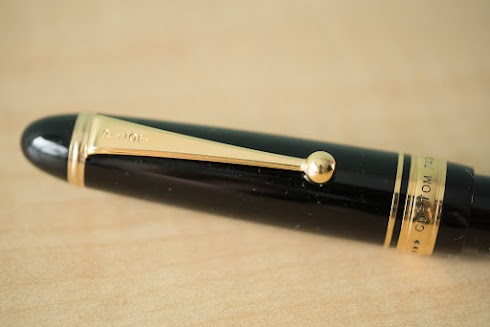 Overall design is quite similar to the Pilot Custom 823. 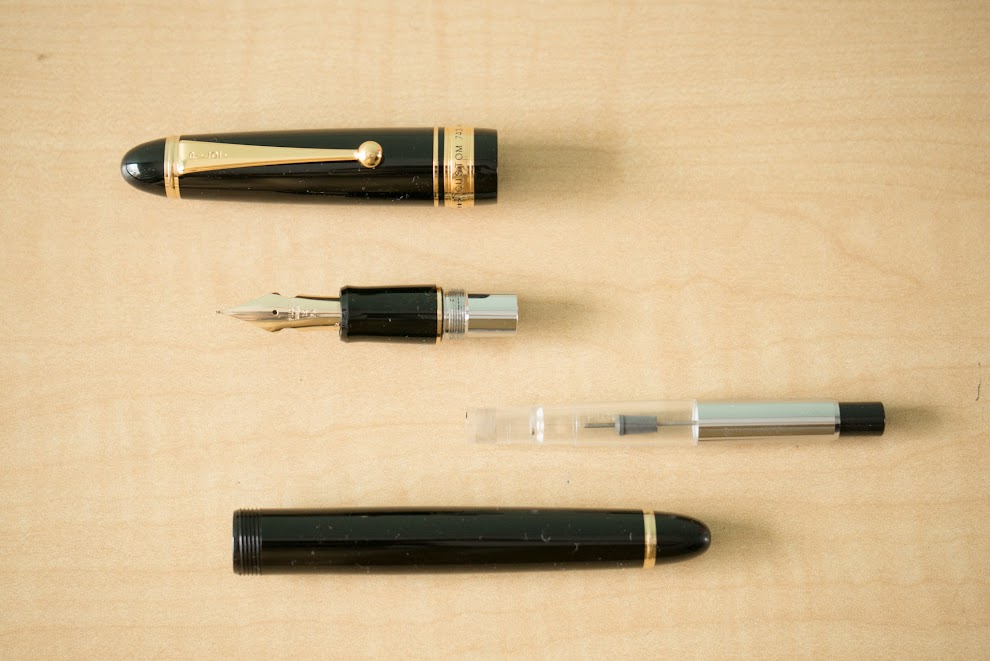 The pen comes with the Pilot CON-70 converter which holds a lot of ink and is easier to refill with just the push of a button.

Below's a picture of the size comparison with other Pilot fountain pens, from top to bottom there's the Custom 743, 823, 74 and Namiki Falcon. 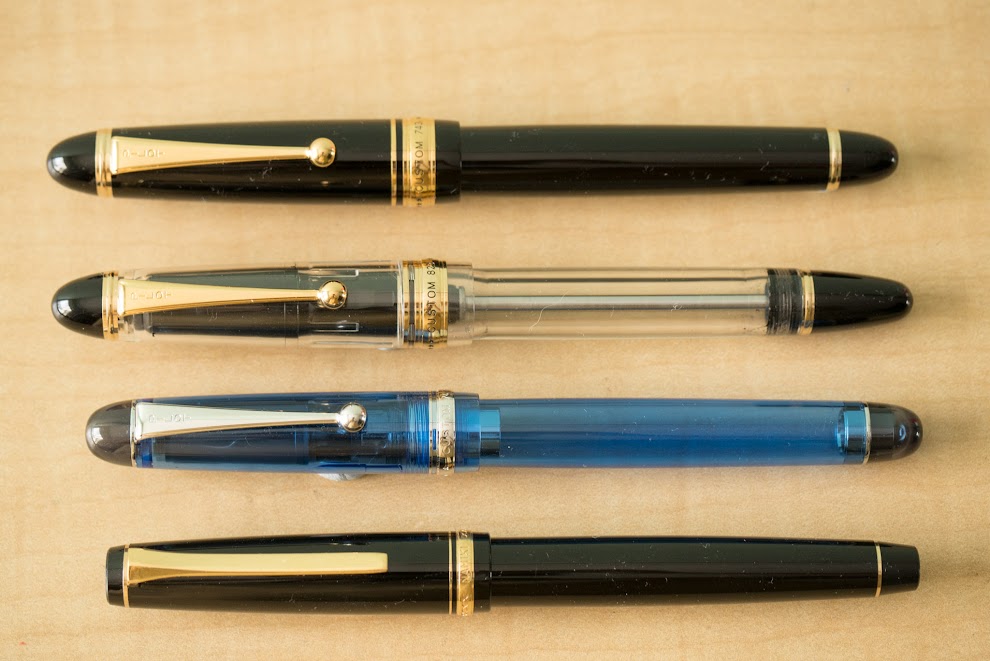 The Falcon nib has two semicircle shapes cut out from the left and right sides. 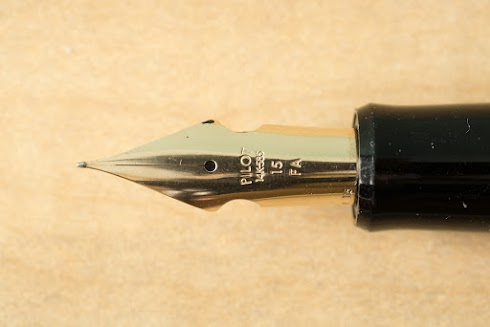 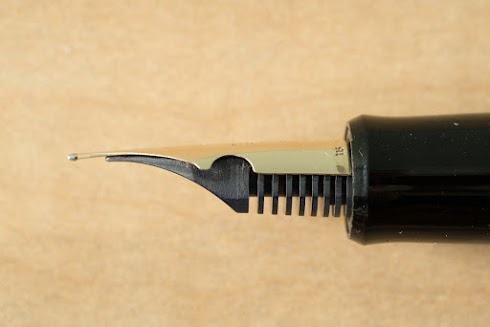 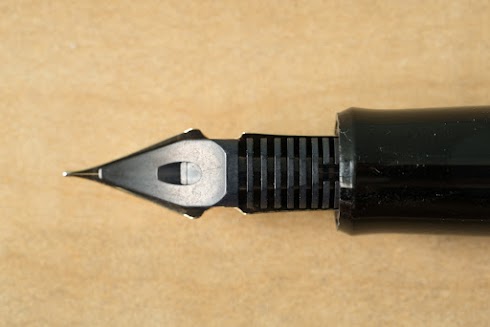 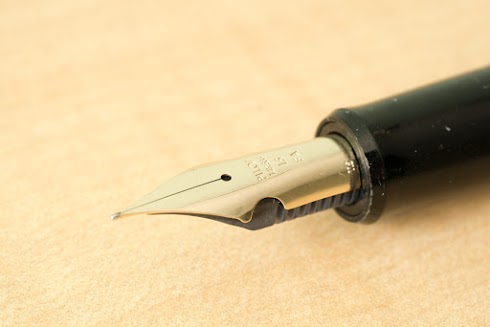 When unflexed, the FA nib gives a fine line and when flex, it gives a broad stroke.

The nib is slightly scratchy on paper but not a big issue. It has good feedback on paper which some people might prefer.

The ink flow from the nib when the pen is new isn't ideal. A friend recommended washing the feed and nib before using to improve the ink flow and it does.

When the pen is new, unwashed, the feed is not capable of providing enough ink flow to in flex mode so the railroading is a common occurrence. Railroading means that instead of a single stroke, two strokes are created from the two separated tines. Flex writing is frustrating with this pen because railroading happens quite often. I use the pen to draw and it's equally frustrating as well whenever I flex to get the broad strokes only to see that ink is not flowing. To get proper ink flow to the flexed nib, you have to go really slowly, which is rather unproductive.

After washing the feed and nib, the ink flow improves, and it was less frustrated to use. And overall experience is actually pleasant. I'm surprised by how the ink flow can improve by the simple act of cleaning the pen first.

Paper matters. There are some paper that invite more ink to flow and would work better with the Falcon nib. But it's difficult to recommend the exact paper and doing so would make using the nib too restrictive, e.g. you can only use on that type of paper. However I find that the pen works well enough on watercolour paper, see the two example sketches below.

Below are some sketches on fine grain and smooth cartridge paper.

I had initially rated this pen at 3 out of 5 stars. After washing it because of my friend's suggestion, now I'm rating it 4 out of 5.

Ultimately, the downside of the pen is the ink flow.

HOWEVER, you should know that you can wash the feed and nib before using to improve the ink flow. After washing, the pen writes and draws much better with less chance of railroading. It feels like a totally new pen, a pen reborn.

One other reviewer mentioned that the Pilot pens are designed for Eastern calligraphy where strokes are shorter. The Falcon nib is certainly more suited for short stroke calligraphy.

Overall, if you know the limitation, this is still quite a good pen.

Pilot really needs to replace the plastic feed in this pen with an Ebonite (hard rubber) feed. That would fix the poor ink flow with the FA nib when flexed.

Its for japanese market , for short strokes not drawing ,