Here are all the sketches drawn in Melbourne and Sydney from 6-16 November 2015.

Two months ago, I was choosing to go to either Japan or Australia for my last trip this year. I was almost certain to pick Japan but it seems like it's really cold there now at this time of the year. Australia would be a more comfortable place to sketch without all that cold.

The first flight was on Scoot from Singapore to Melbourne, then with Jetstar from Melbourne to Sydney, and lastly with Scoot again from Sydney to Singapore. The total cost of the three flights came up to around SGD$1000. Scoot Airlines was running some sort of promotion and I saved $80 each for two flights. I went with my girlfriend so I saved a total of $320 because of that one day promotion that I happened to spot. So lucky!

The Boeing 787 Dreamliner planes that Scoot were using were more spacious than I expected. So it was overall a good deal flying with them, and I saved some more money by not having any check-in luggage. The flight from Singapore to Australia took 7 hours. The flight from Melbourne to Sydney took 1 hour. 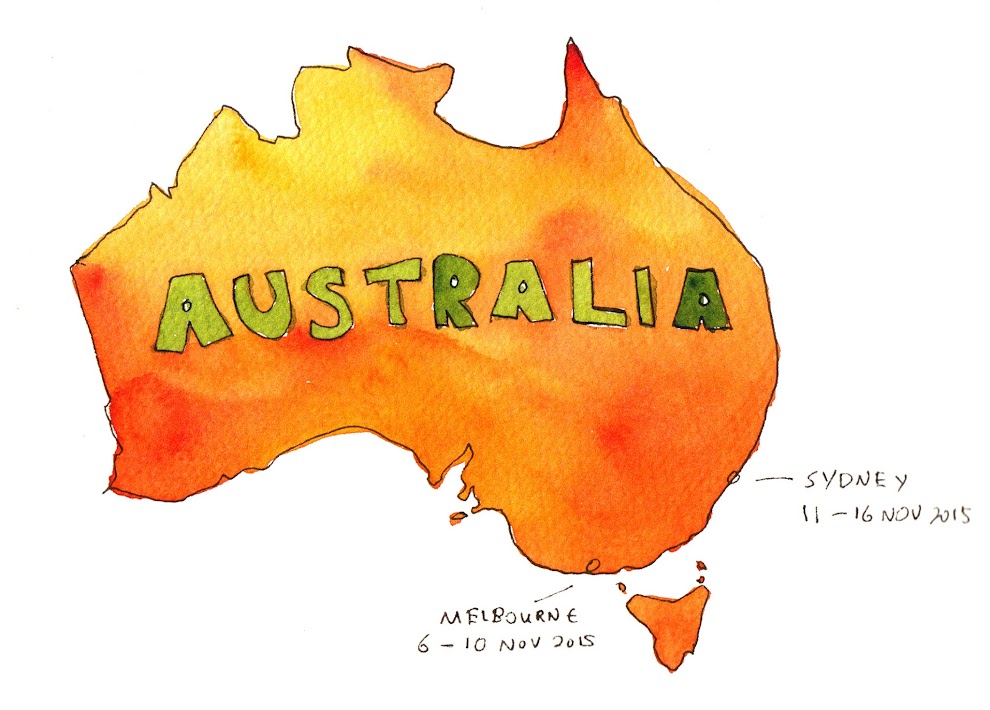 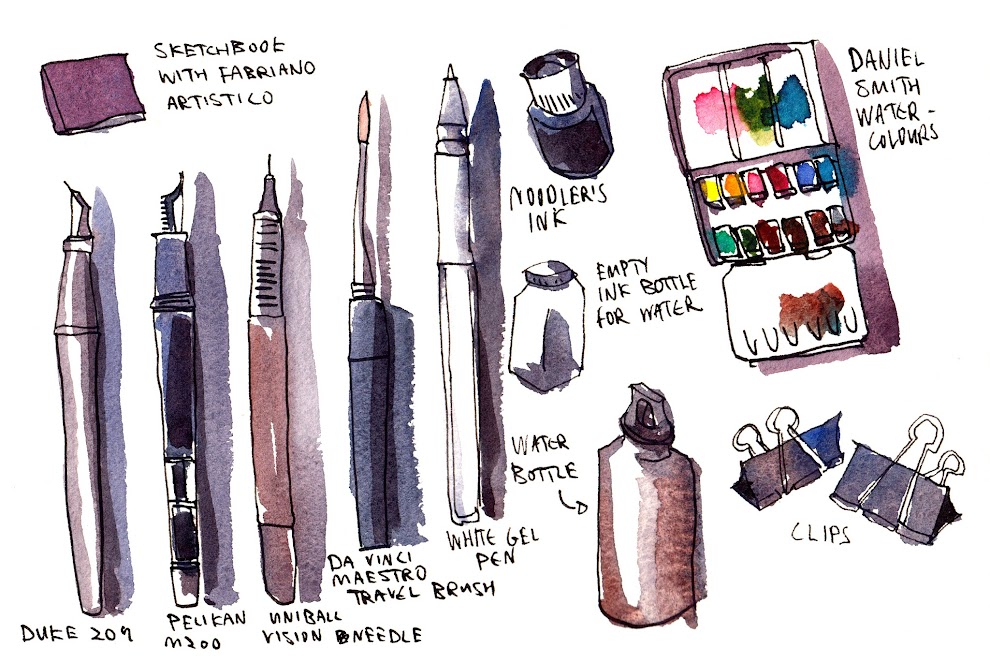 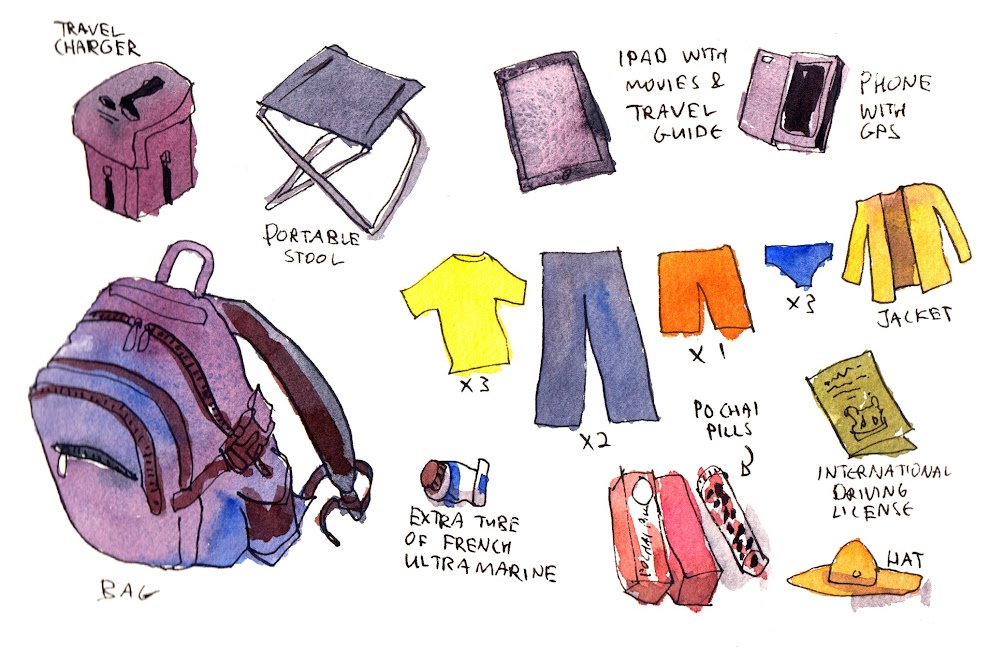 The things I brought this time were not too different from my other trips. The most helpful items were the hat and jacket. Temperature in Melbourne and Sydney can vary quite significantly from day to night, and also depending on the weather, especially when it rains.

It was almost always drizzling by late afternoon and evening. I was still able to walk around quite a bit in the drizzle because of the waterproof hat and jacket.

The portable stools I brought along did not get much use because it was easy to find places to sit in Melbourne and Sydney.

This is the sketch of the accommodation that I booked through Airbnb. It's a comfortable and cozy house owned by the friendly hosts Peter and Mary who were also into traveling. The house was huge and the room was simple with a nice soft bed. It was cold at night but thank goodness there was a heater. 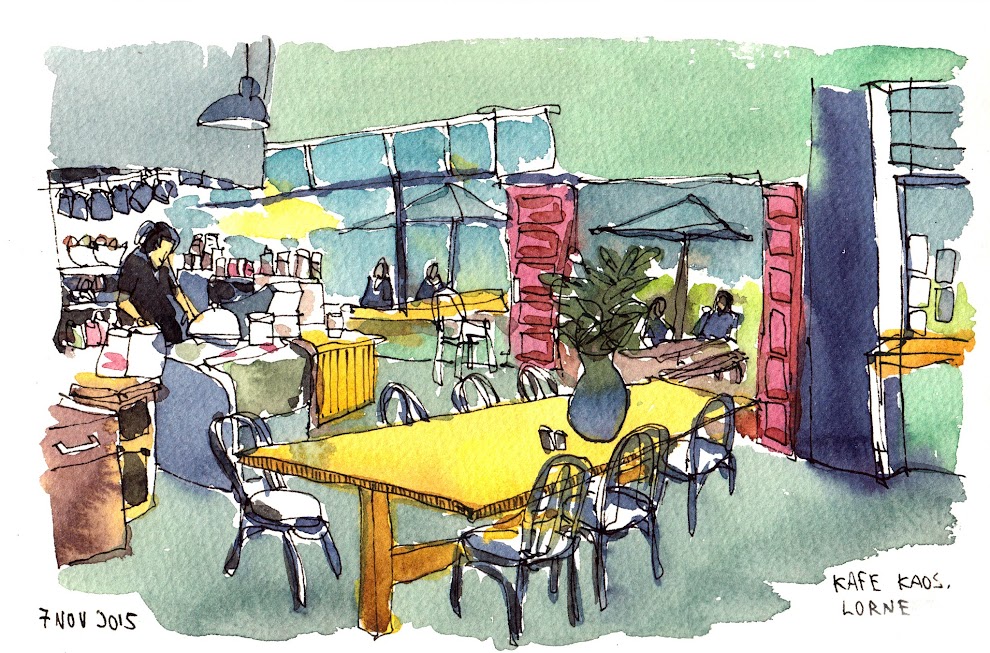 This is a sketch of Kafe Kaos at Lorne along the Great Ocean Road. It was a nice town with a few cafes and restaurants by the main road. 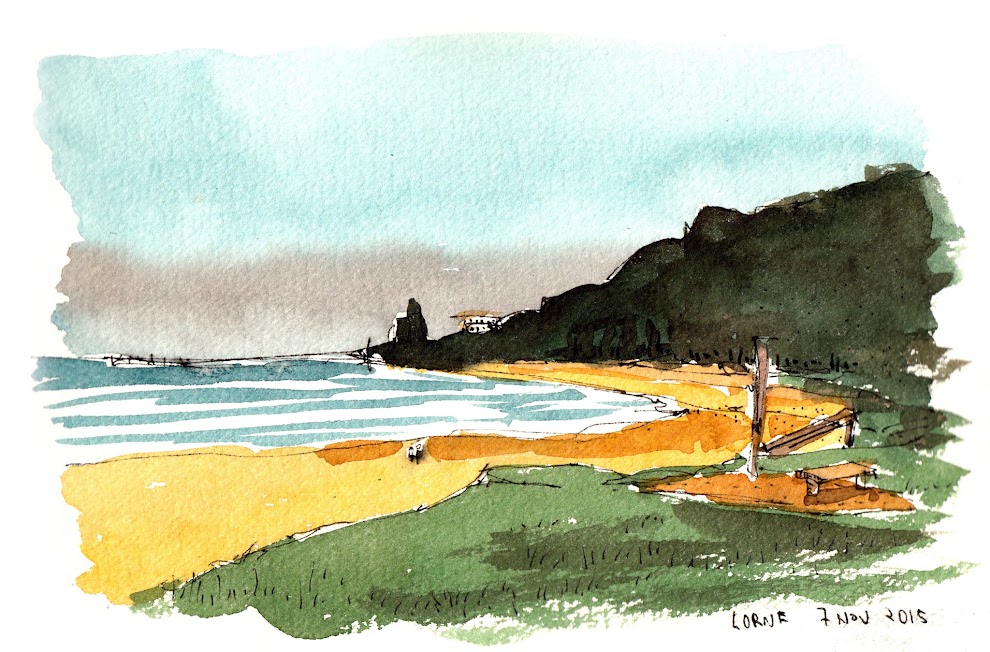 After having lunch at Lorne, I sketched the beach there. It was cold and the wind made it even more unbearable so I had to sketch quickly and get back into the car.

The Great Ocean Road is long and I've split my time on the road into three days. For the first day, I drove from Melbourne to Apollo Bay, then for the second day it was to Port Fairy, and the last day back to Melbourne again.

Many of the beach scenes would look like a variation of this so I did not draw too many beaches. They are all beautiful though, but they would look too similar when drawn and shown side by side on the pages. 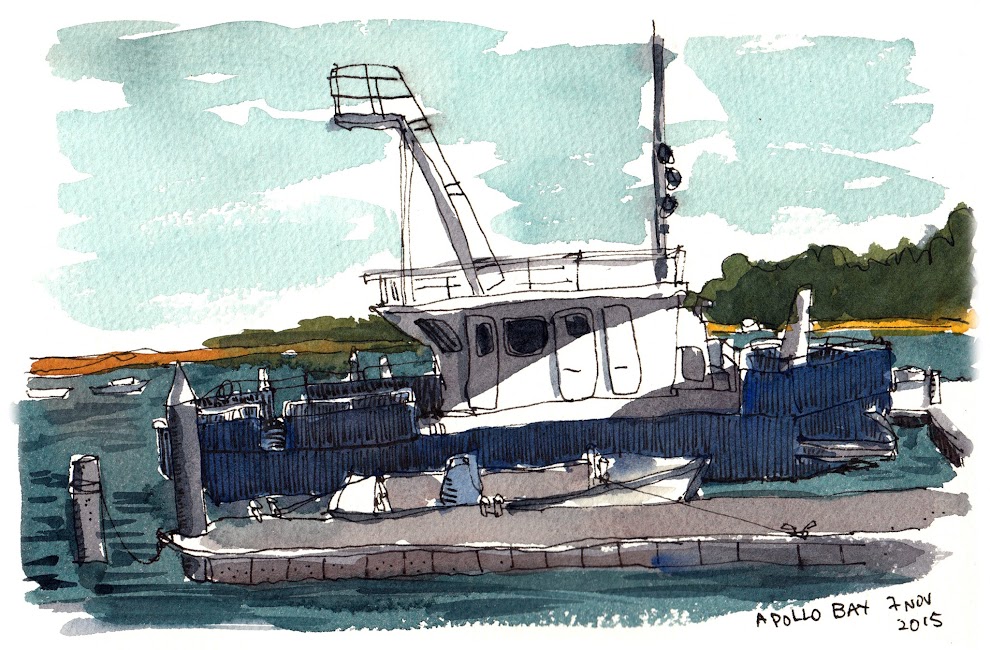 On hindsight, I should have sketched the boat from an angle rather than from the side. The sketch is not clear at differentiating the subjects. 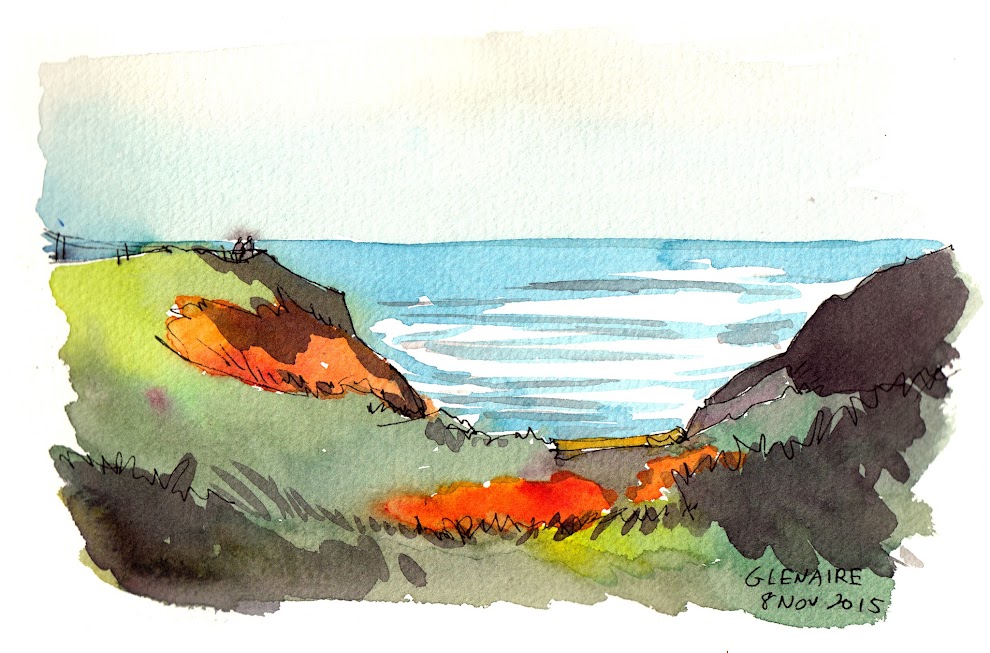 There are many convenient designated stopover places with beautiful scenery on the Great Ocean Road. Unfortunately, most of the time, it was too cold even when on a sunny day. Most of the time, I had to sketch quickly and fight the urge to get back into the car away from the cold. I wished I was able to just sit down longer to admire scene and nature.

While most of the Great Ocean Road is near the sea, parts of the road will go further inland and that is when you will be able to see the rolling hills, vast pastures, cows, sheeps, houses and towns.

The 12 Apostles are truly beautiful. There are actually only eight left. I was there in the afternoon and they look good even under the harsh sunlight. I imagine they would be breathtaking in the evening.

This is a scene that one should draw on a larger canvas. You can't really capture the size or awe of the place in a small sketchbook like mine which is almost A5 in size.

Unlike other places along the Great Ocean Road, this place had a lot of flies. I had a difficult time sketching and fending off the flies. I had to shake my head constantly as my hands were holding the sketchbook and brush. It was unpleasant.

Further along the main road, after probably 10 minutes of drive from the 12 Apostles, there is another stopover location with several hiking routes. There are other formations that you can see if you follow along the different routes. The sights are beautiful but again there are lots of irritating flies.

The water was so blue that I felt like jumping in even though I can't swim that well. 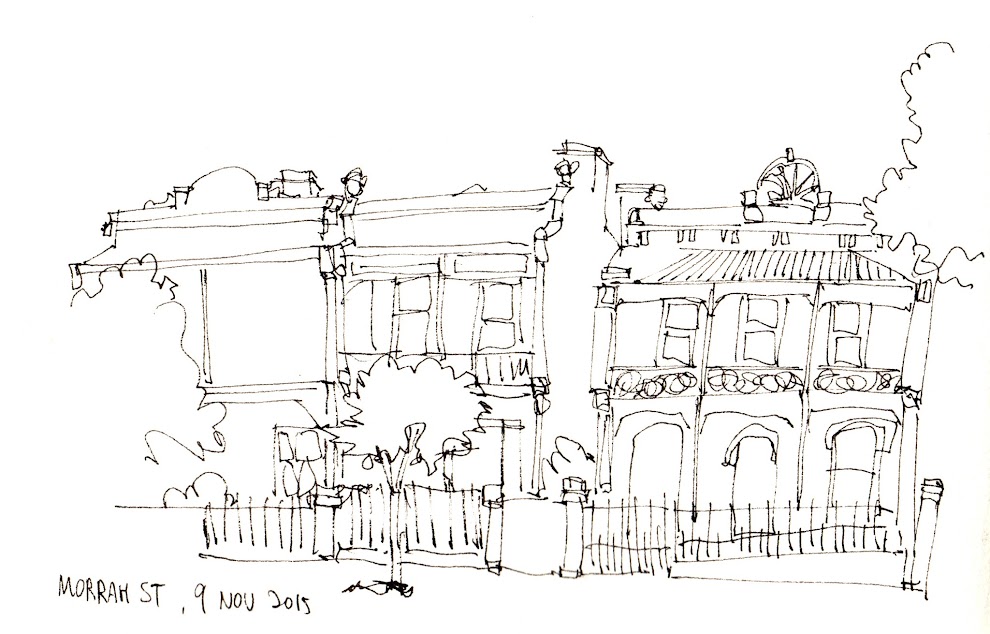 After coming back from the Great Ocean Road, we stayed at a house, also booked on Airbnb, on Morrah Street. I did not have the mood to colour this piece for some reason. Too tired perhaps from the 3-4 hours drive from Port Fairy to Melbourne. 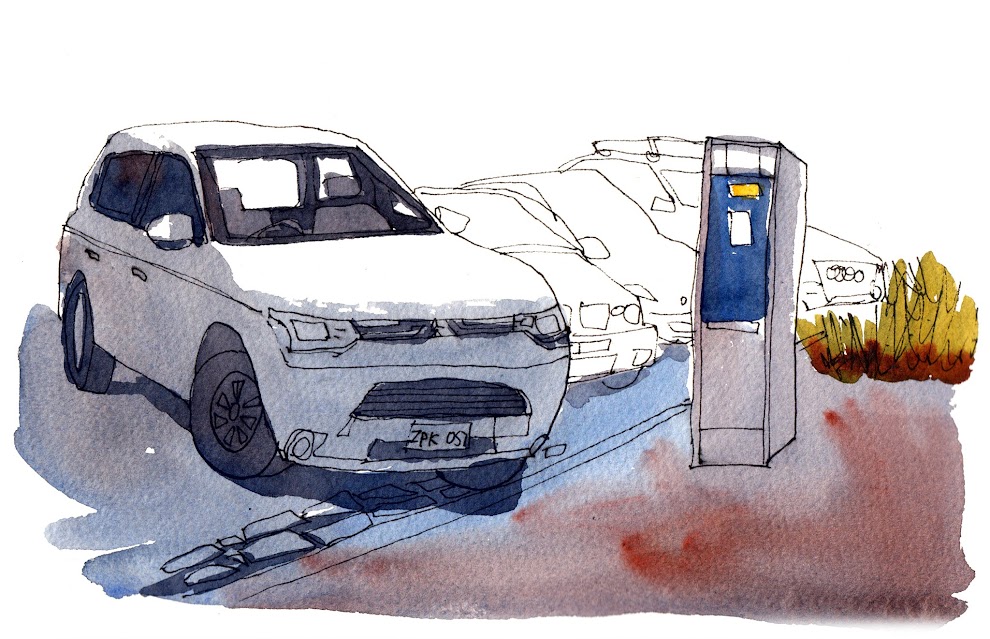 I rented this Mitsubishi Outlander for AUD$50 per day from Apex Car Rentals. It's really worth the money. You'll be able to see more with a rented car than going on a guided tour.

Driving in Australia is easy. The roads are extremely well paved and if you're outside the city there aren't many cars. However, when in the city, the cost of parking can be very expensive. To save on parking, I only book places to stay if they have parking permits.

I don't remember Apex checking for my driving license but I brought along my international driving license just in case. It's left hand drive there, just like Singapore.

The only free day I had in Melbourne was spent in the morning at Queen Victoria Market. It's a huge market that sells all sorts of vegetables and meat, and also accessories and clothing for tourists.

There is this food stall called The Mussell Pot at the open air market outside that sells really delicious mussels at AUD $10 a bowl. Highly recommended! 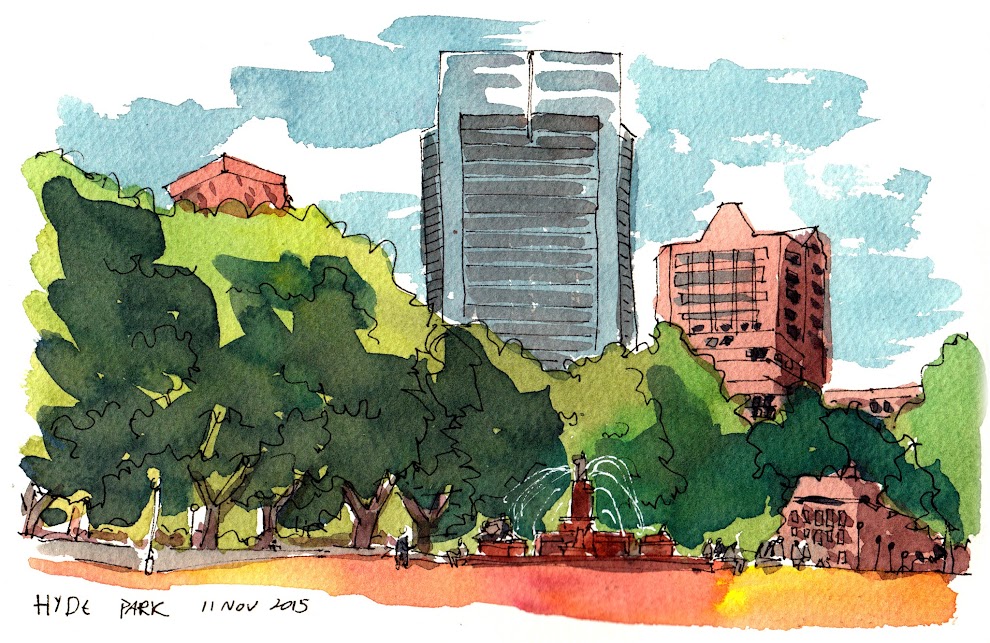 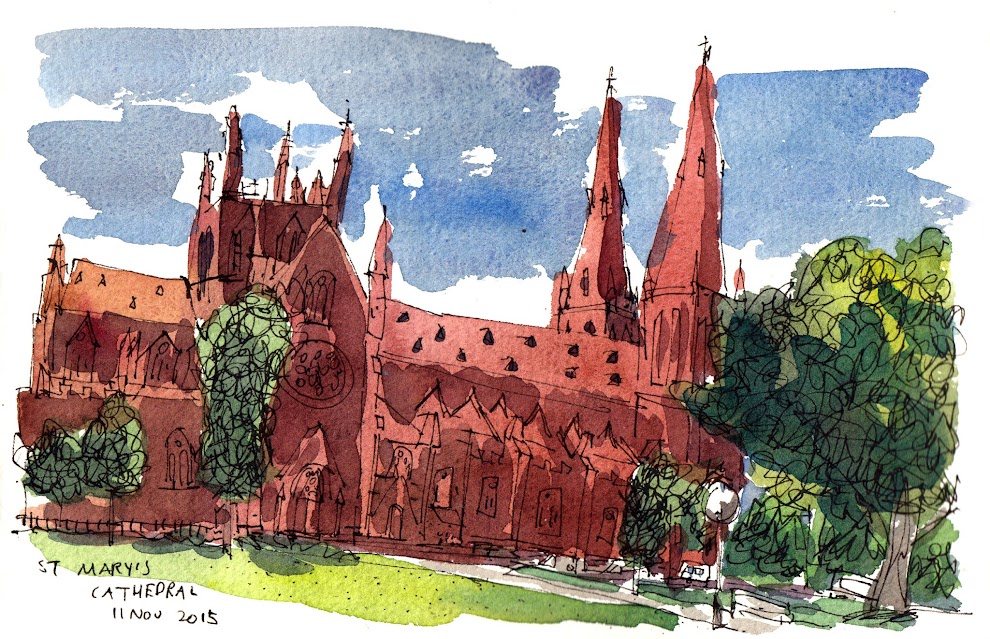 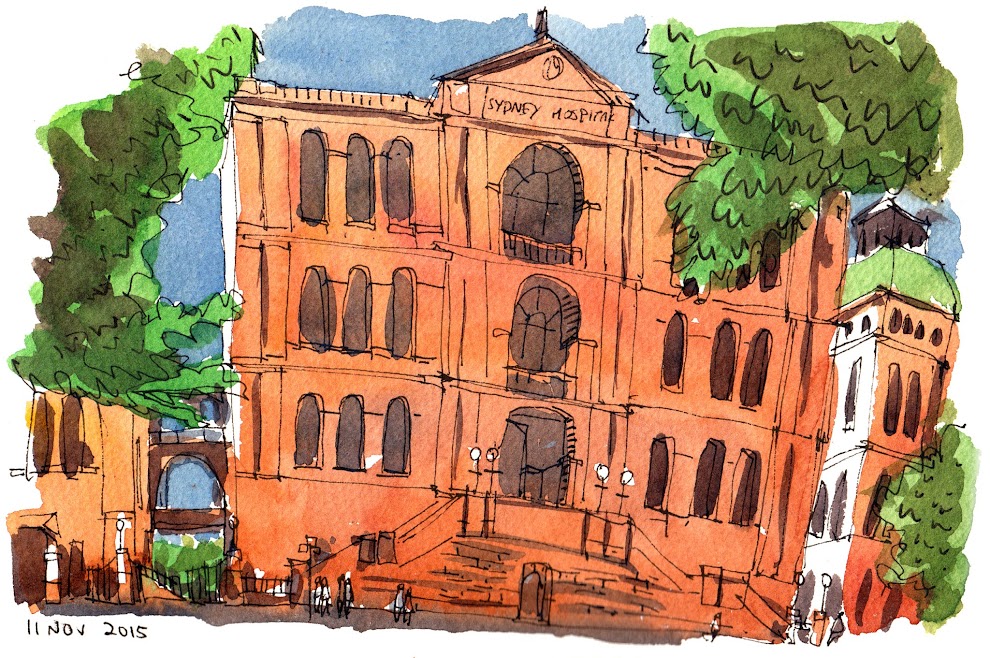 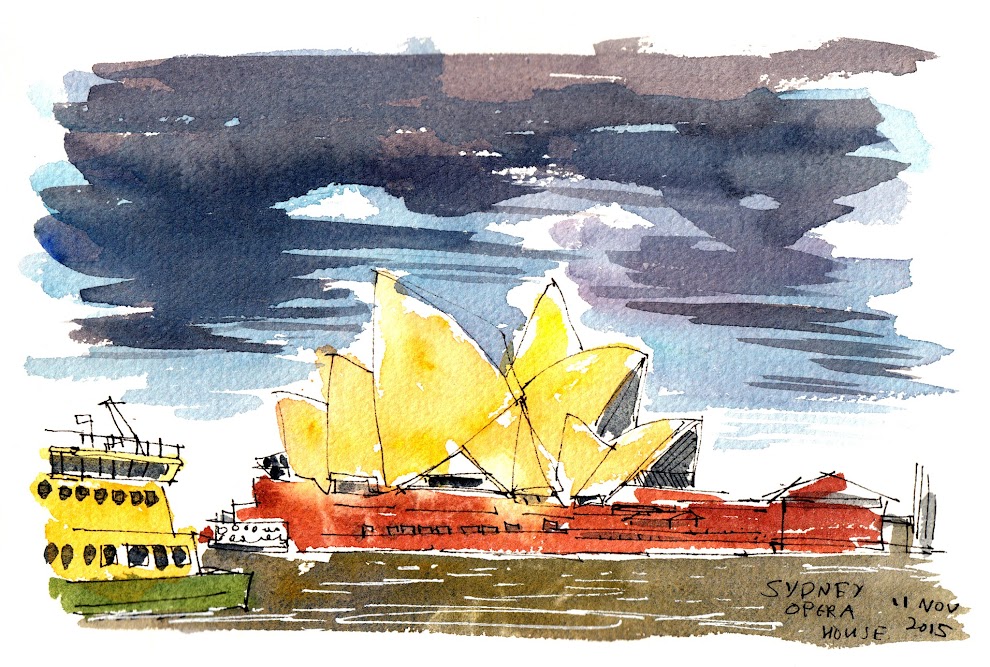 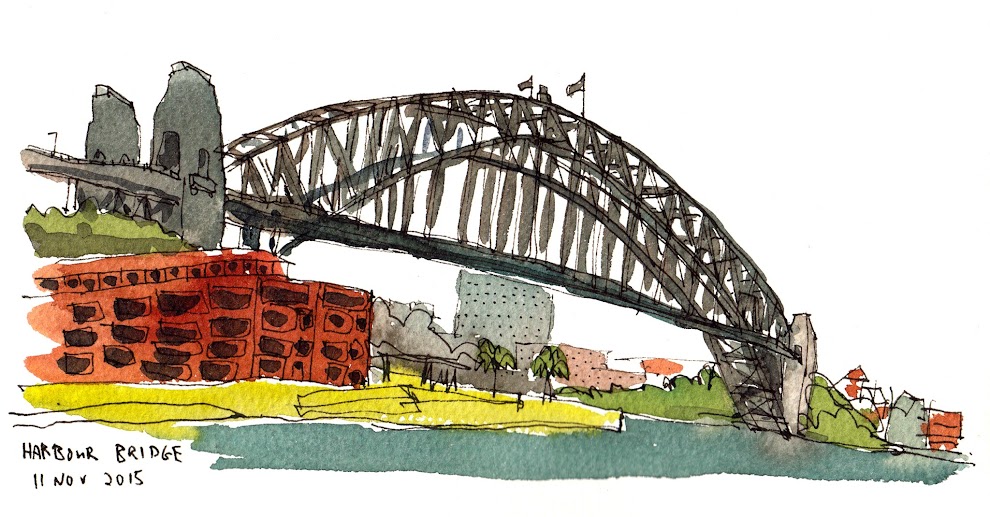 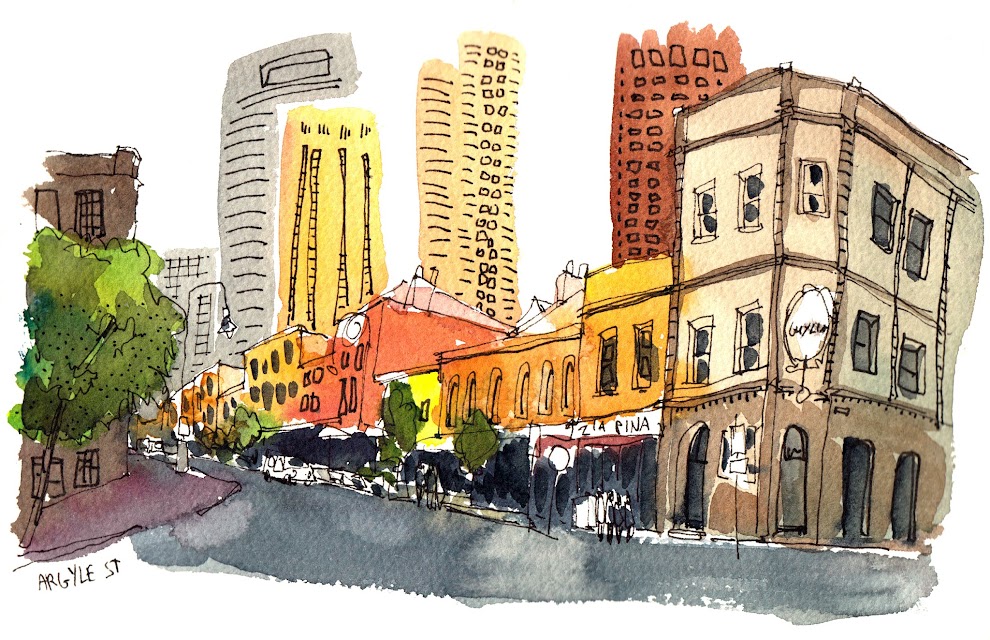 First day in Sydney was spent walking from Central to the Sydney Opera House. Along the way, I sketched Hyde Park, St Mary's Cathedral, Sydney Hospital, Opera House, Harbour Bridge and Argle Street. Most were drawn with lines only because it would often drizzle. I went back to the same places to colour them on other days.

I've always thought that the Sydney Opera House was white. But it's actually off-white. It was quite shocking to me as I thought it was white for years. 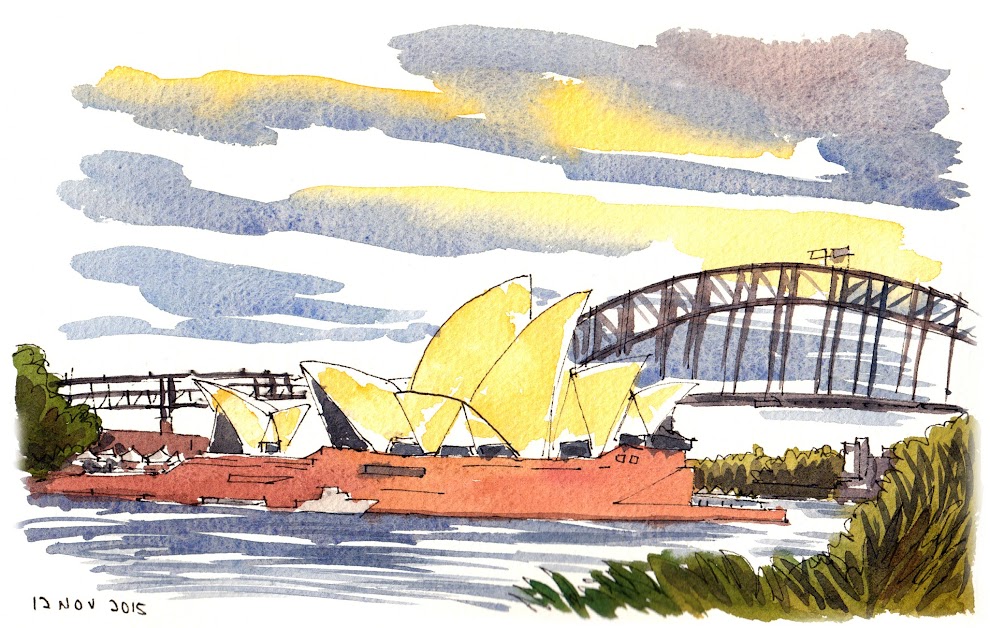 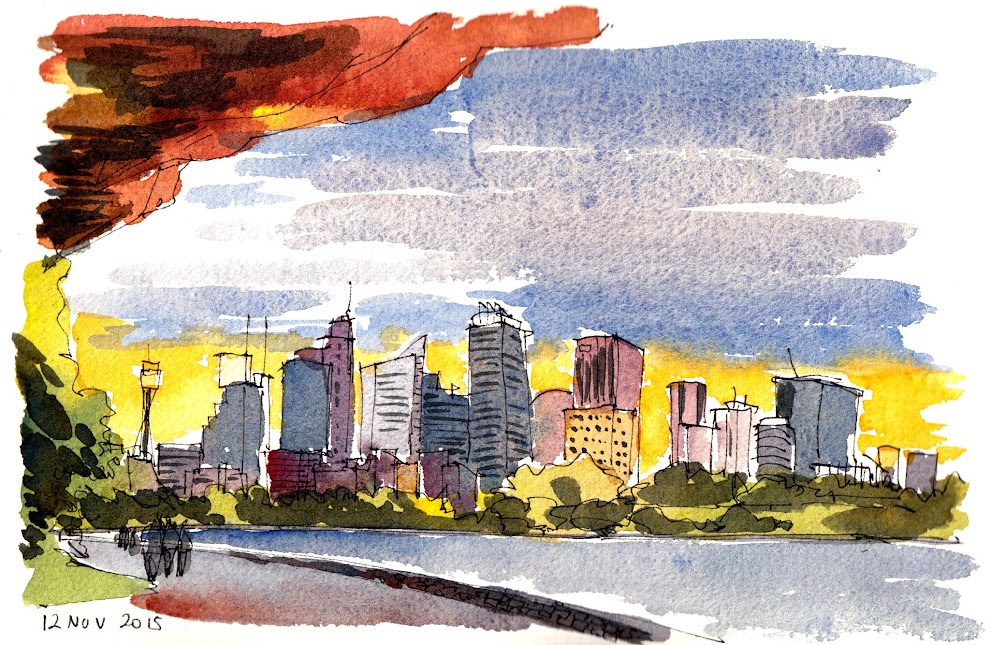 I met up with Liz Steel who showed us around the Botanic Gardens. We talked a long time about blogging. 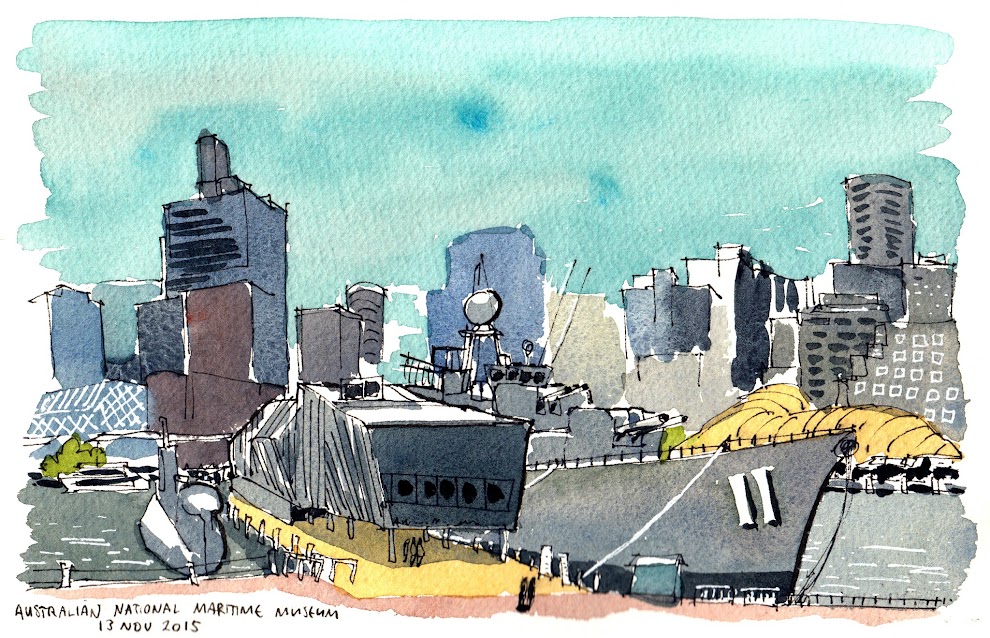 The next day we went to Darling Harbour. The whole place was undergoing some major renovation and construction so it was not very sightly. Also the harbour area look quite busy and a bit messy. 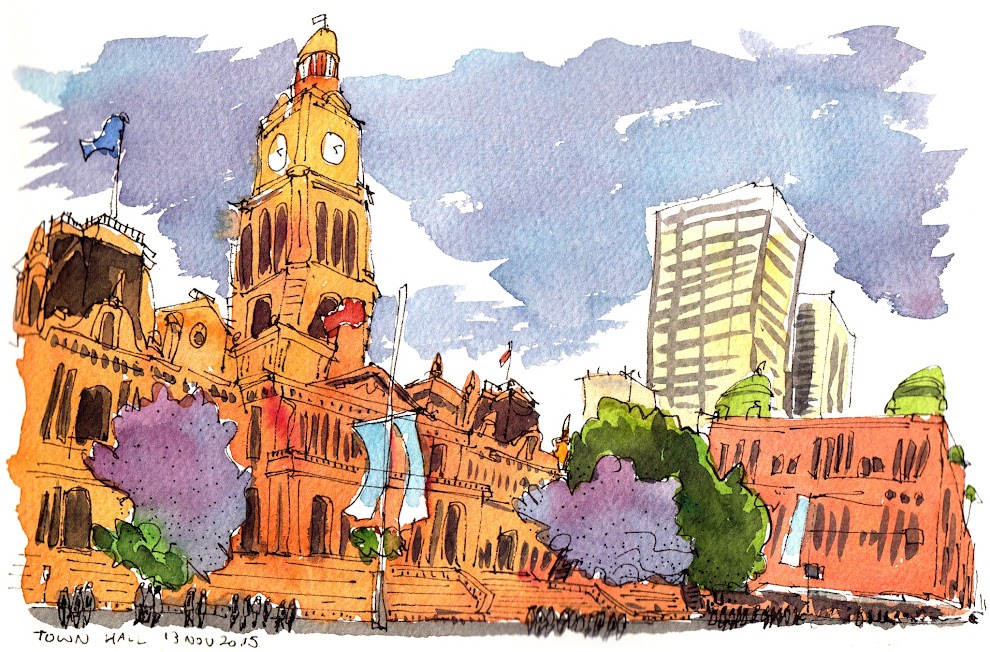 I love the old buildings in Sydney. This is the Town Hall where there are beautiful trees with purple leaves. 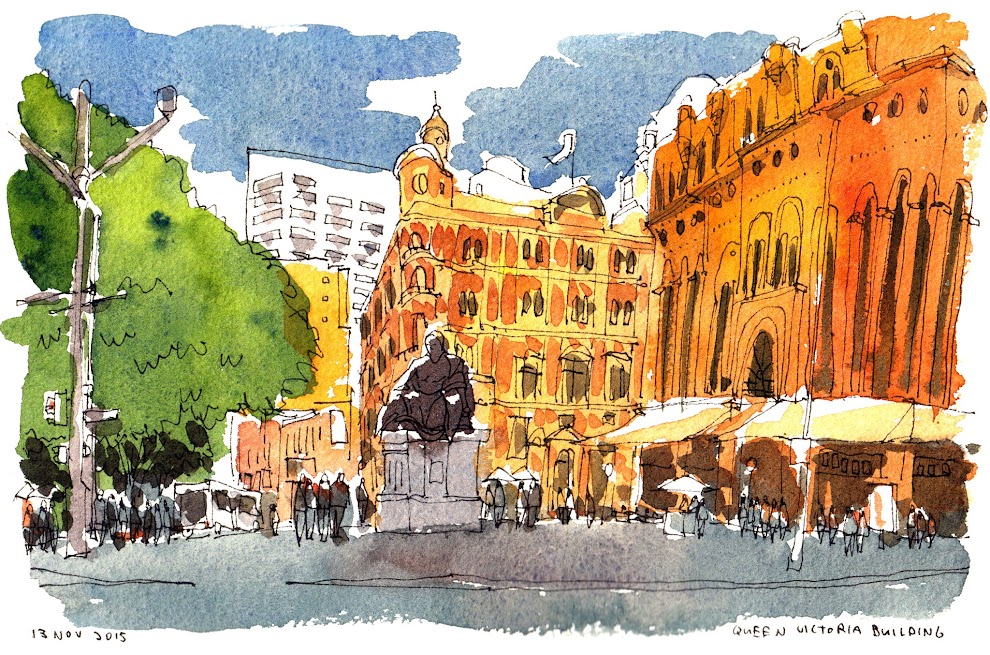 The Queen Victoria Building is one of the more beautiful buildings in Sydney for me. I love that there is a statue outside.

While sketching this, a guy struck up a conversation with me on sketching. As usual, he is someone who says he cannot sketch. He stood around to watch me sketch and had to leave before I started colouring the piece. 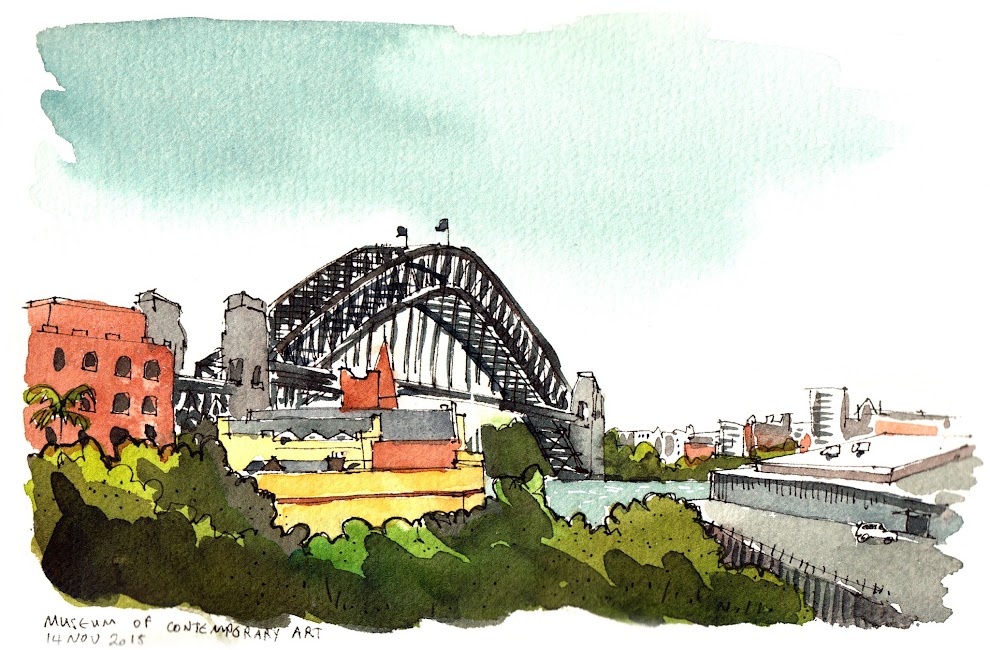 I met up with several Sydney sketchers on a Saturday morning at the Museum of Contemporary Art. It was nice meeting sketchers from other countries and talk to them. 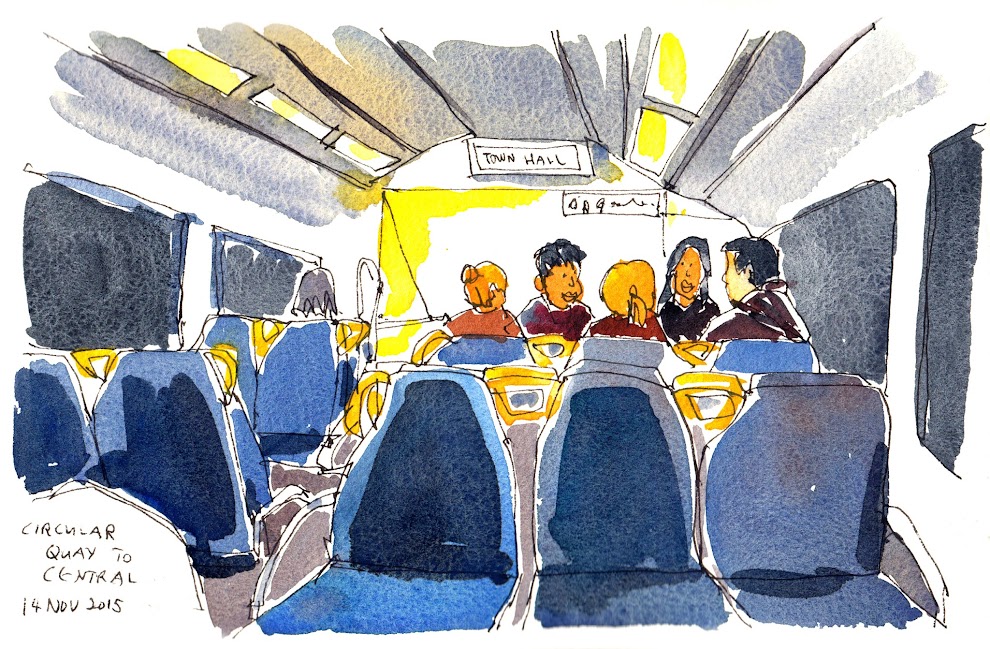 Trains in Sydney are nice, especially the ones that go to Sydney Airport. I like that they have soft seats and never seem to be too crowded, maybe because I never use them during peak hours. 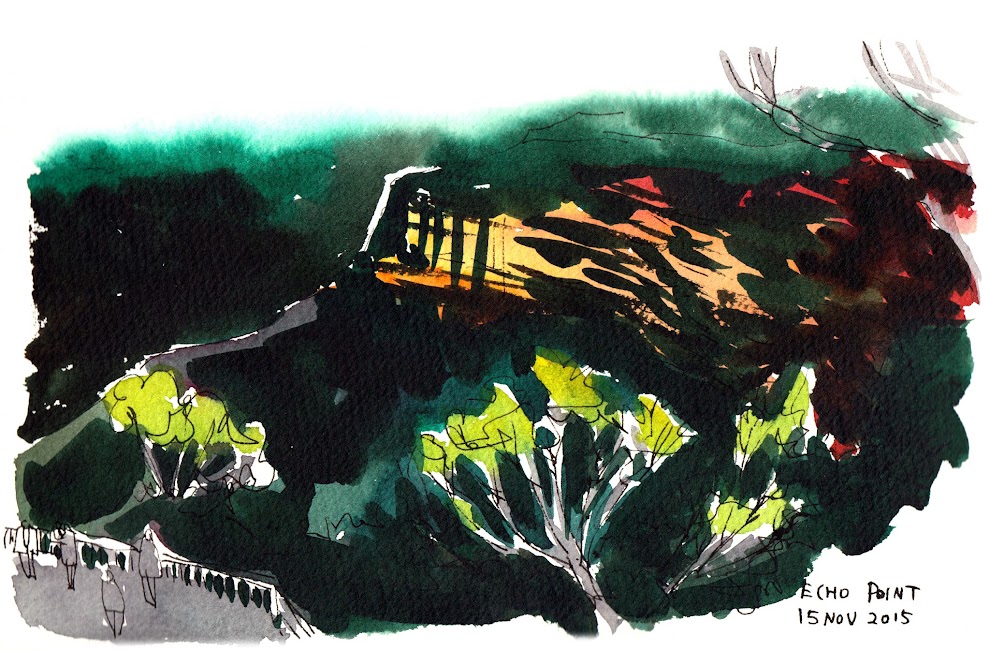 On the second last day, we traveled 2 hours by train to Blue Mountains. Unfortunately the weather was bad and it was so misty that we were not able to see much of anything.

It was a disappointing trip to spent a total of four hours to and fro. Luckily it was on a Sunday so there was a cap on the charge on the Opal card. The Opal card is the public transport card in Sydney. There is a $2.50 maximum cap on Sunday which means you can travel as much as you like on any form of transport and not pay more than a total of $2.50. On any other day, a trip to Blue Mountains on the train can cost up to AUD $16 for a return trip. OMG!

Katoomba Station is the place you should alight at to visit Blue Mountains. It was 9 degrees Celsius while I sketched this. I colored this place much later indoors. 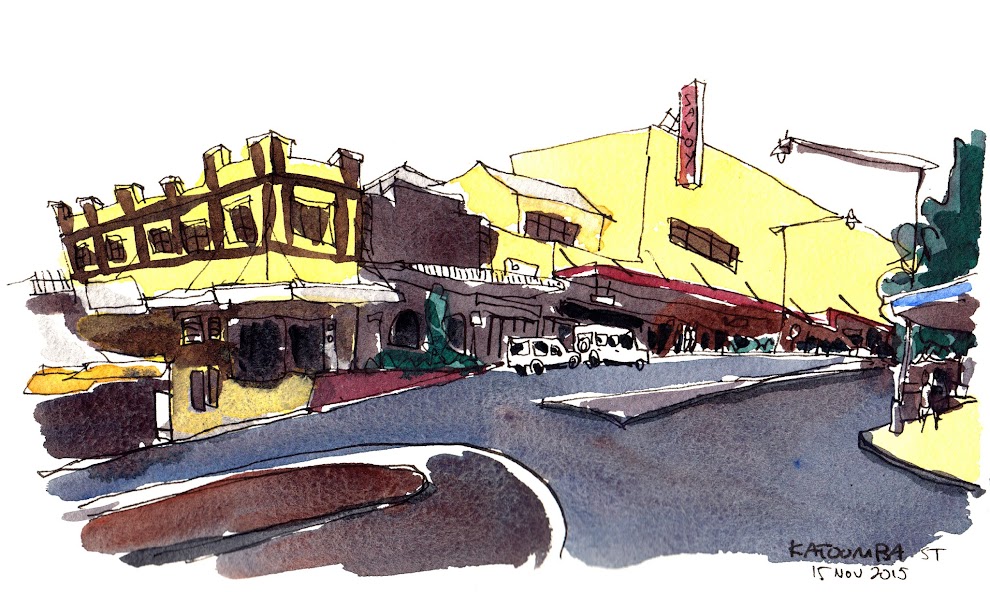 Katoomba Street is the Main Street with most of the shops.

To get around Blue Mountains, you can opt for the guided ExplorerLink Buses ($40) or Trolley Shoppe ($25). They are hop-on-hop-off buses. ExplorerLink has a half-hour frequency while the Trolley runs hourly. Or you can use the public transport buses but that will not get you to all the sightseeing spots. If it's a misty day, I suppose you'll waste a lot of money on the guided bus tours. 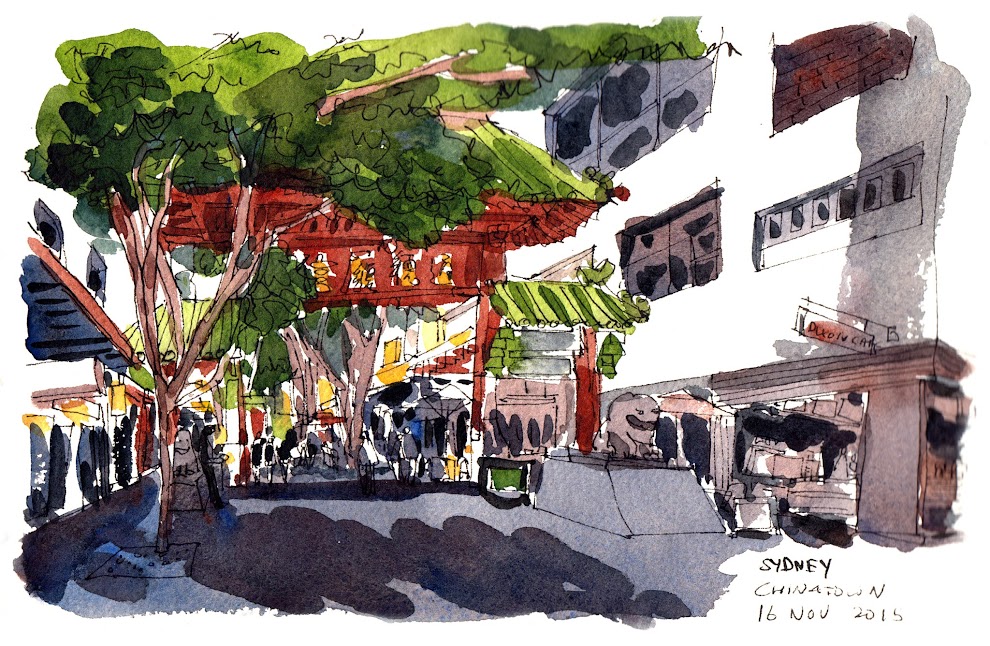 Chinatown is where you can get more variety in terms of food choices. There are several food courts there. The food portion is big and can be shared by two people. We ate there quite often because it's near our accommodation. 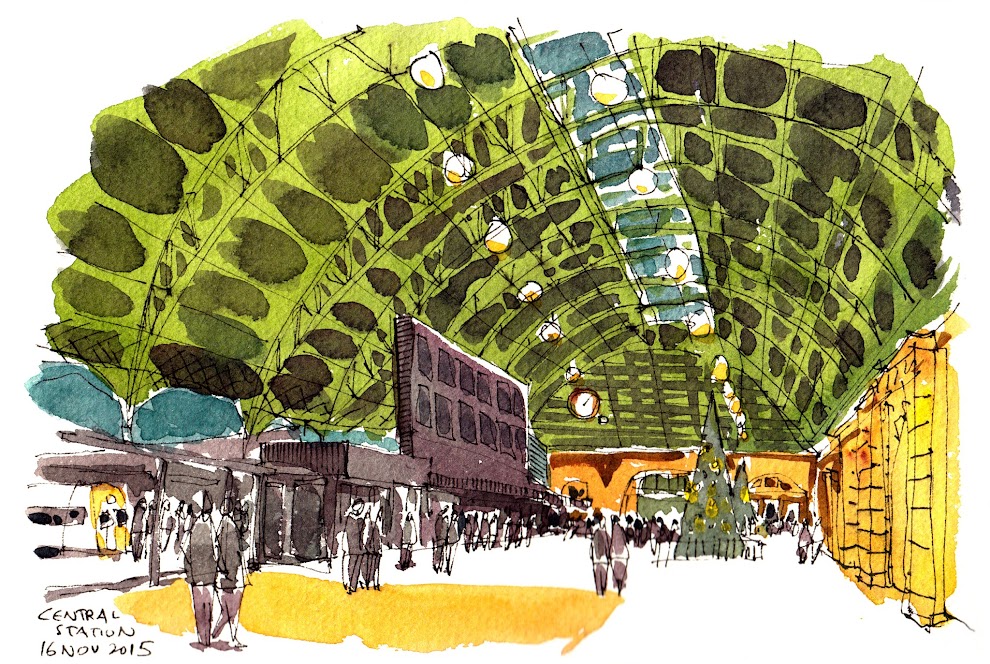 Central is the station where we arrived at in Sydney. There are many train lines going to different areas of Sydney, even out of the city area. The light rail is also available here which can bring you to Chinatown in two stops.

So these are all my sketches. I brought along a 40-page sketchbook made with Fabriano Artistico paper. I got it made by the SPD, formerly known as Society for the Physically Disabled, in Singapore. Filling 40-pages in 10 days is very manageable. I suppose I could fill a 60-page sketchbook too, with more double page spreads.

Here's the flip-through video of the sketchbook

Teo Yi Chie - your travel sketches of the Great Ocean Road, Melbourne and Sydney capture them beautifully! It's been a few years since you did these - but we just drove the Great Ocean Road and your colour is spot on. Love the balance of scenery and 'everydayness' of cafes and hinterland (the rolling hills when the road goes inward). Thank you for showing another angle to travelling!!! (I want to learn to sketch contemporaneously now).

@Frances Stone
Thanks. I would love to go back there again. Lovely place and so relaxing.