I just came back from Bandung, Indonesia today from the international sketchwalk organised by the Bandung sketchers. It was great fun sketching with new and old friends. I managed to fill up all 48 pages of the Strathmore watercolour sketchbook I brought. 45 pages were sketched on location.

Here are all the pages: 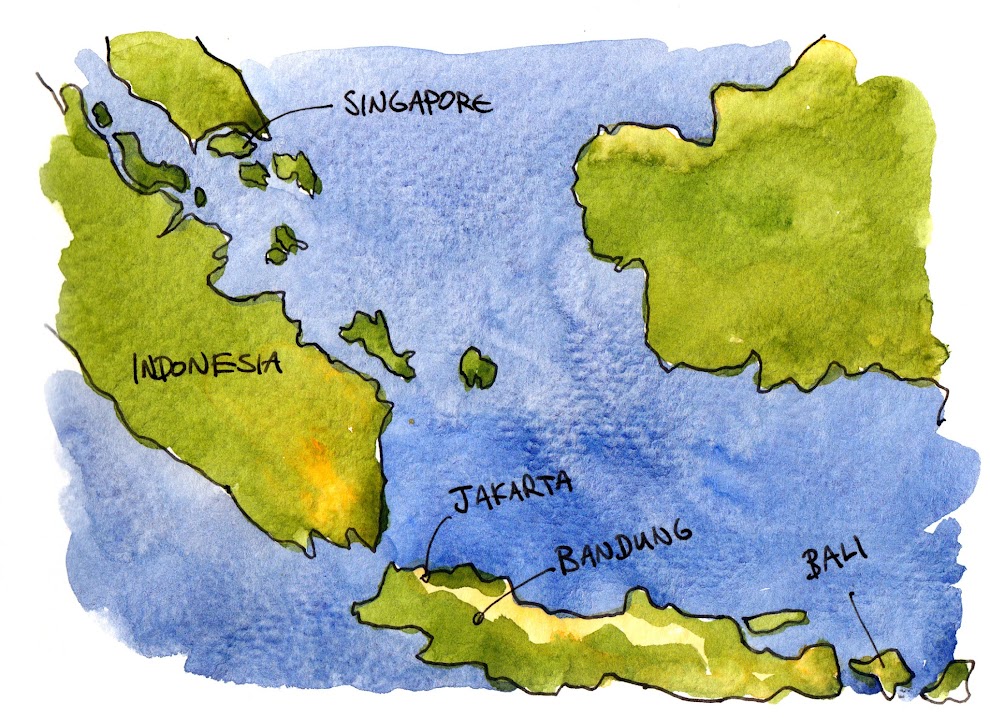 Bandung is the capital of West Java province in Indonesia and the country's third largest city by population.

The flight from Singapore to Bandung took 1 hour and 45 minutes. That was a short ride and I flew by AirAsia. Thanks to the long weekend with Labor Day as public holiday, plane tickets were more expensive for flights that flew on Friday. I saved SDG $150 by booking for a flight one day earlier. 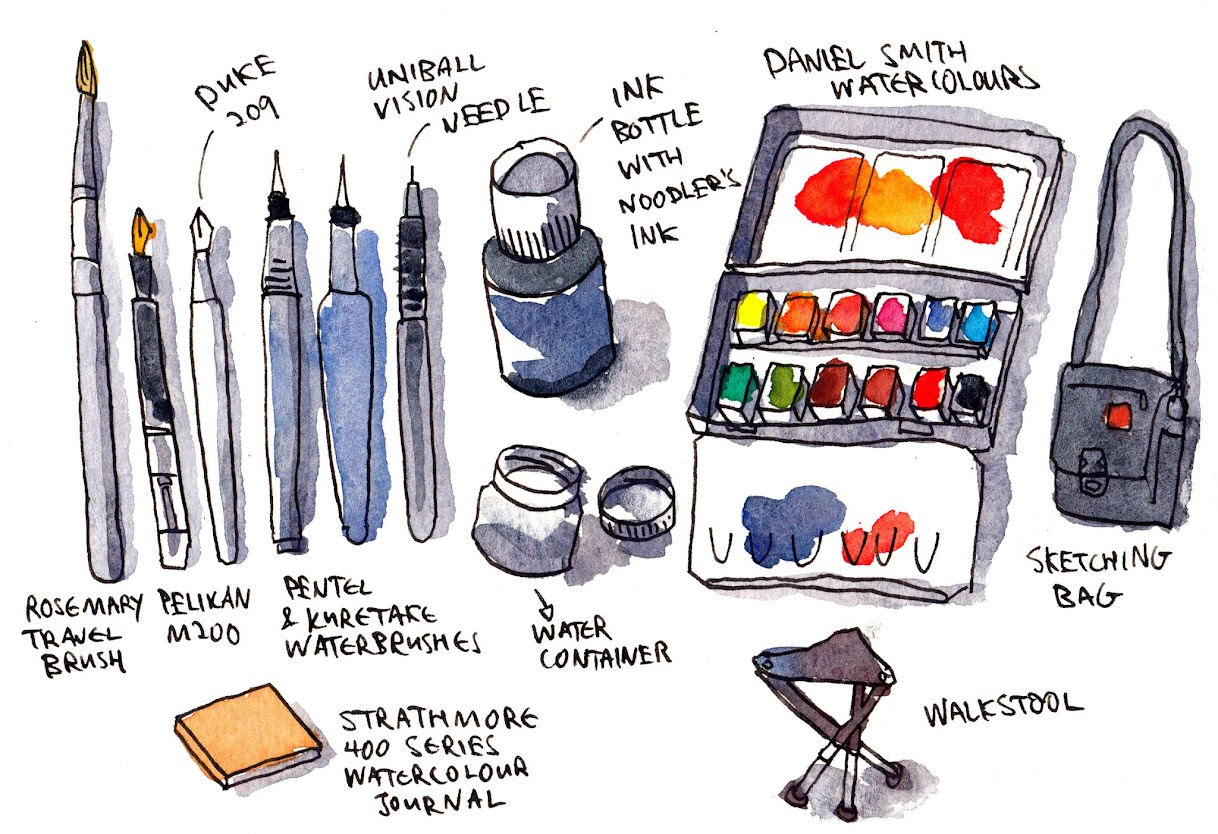 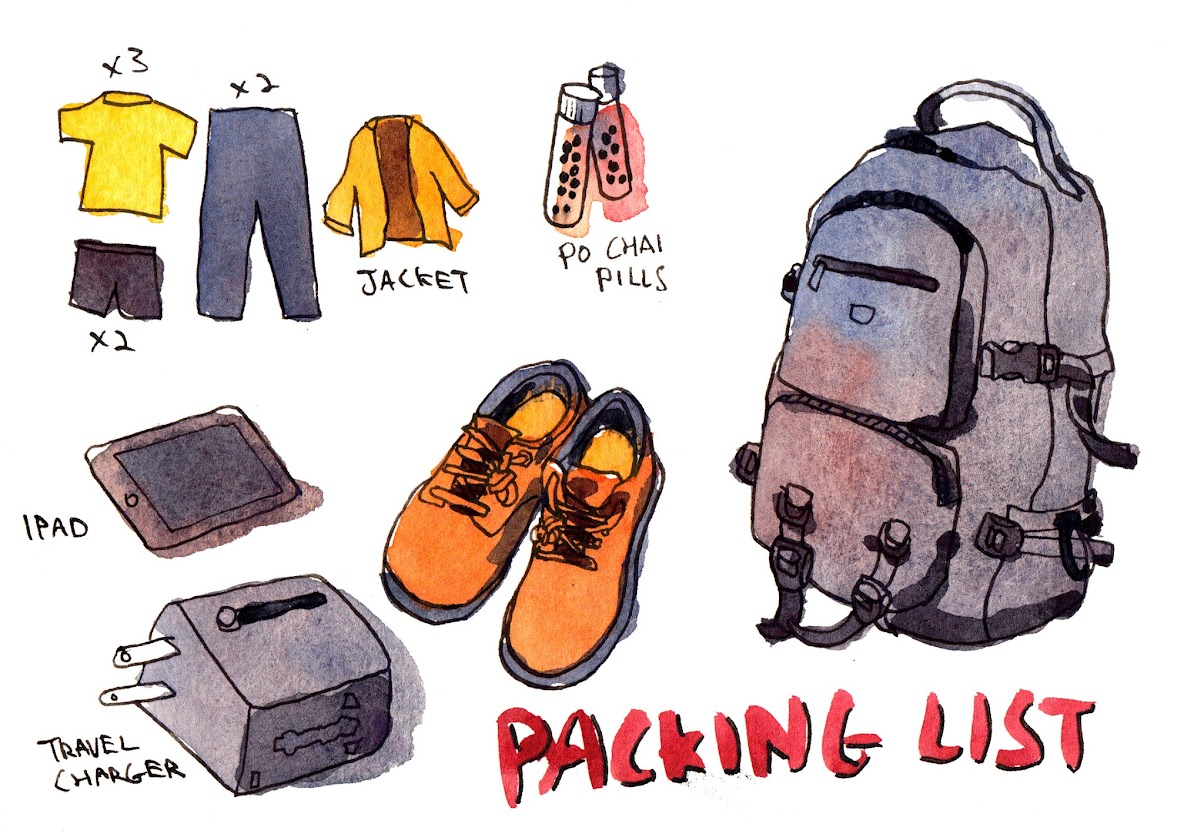 I've already mentioned the stuff that I packed for Bandung in an earlier post but I wanted to add some more information here.

The drawing materials I brought were almost the same as those I brought to Hanoi in March. The only different thing was the new Strathmore 400 series watercolour journal. I wanted to use the opportunity to fill up the sketchbook so that I could review it.

Reviewing sketchbooks for me is the most tedious of all items. The reason is because I like to complete my sketchbooks before reviewing them so as to provide a more accurate account on using them. My search for the perfect sketchbook is still ongoing. I'll review the Strathmore sketchbook in a separate post.

One thing I regretted using is the Noodler's ink which has really slow drying time. Several pieces of my black and white line sketches were sort of spoiled because of ink smudging when I closed the sketchbook thinking that the ink was dry. If you're going to use watercolour over the Noodler's ink, then it's fine because the watercolour will act as a protective coat to prevent the ink beneath from smudging.

I've heard from sketcher friend Darman Angir that you can improve the drying time by adding water to the ink in the bottle. He said that you could add up to two parts water and one part ink and still retain the same level of black. I would have to try that out myself in the future.

For future trips, I'll be using the Sailor Kiwa Guro and the Platinum Carbon Ink.

I was on the same flight at Favian Ee and we arrived in the afternoon. We spent a few hours walking around the city area looking for things to draw. Along the way, we spotted several huge bamboo art installation at some road junctions. This particular one looked like a spiked ball. There was another one in a later sketch.

This aerial scene was sketched in black and white because it was drawn during the evening from my hotel room. I was still drawing when the sun went down making it really difficult for me to see many of the buildings, especially those on the right. I started the sketch from the left. By the time I finish, I knew that I would not be able to see any colours to be able to use watercolours.

I had a bad experience using Noodler's ink because it had smudged for those black and white pieces. I did not have this problem with the GAM watercolour sketchbook I brought to Hanoi but it's really a problem with the Strathmore sketchbook. Certain combination of inks and sketchbooks just don't work together well. I should have used the hairdryer to dry the pages completely since I was inside the room. It affected some of the watercolour sketches also. For those where the watercolour wash did not go over the lines, there were smudges on the opposite page.

This is probably the most popular building for sketchers because it's just right in front of the hotel Ibis Styles Braga. All the workshop instructors stayed at this hotel.

I drew this sketch at night and the street Jalan Braga was quite well lit. Colours were added the next morning on site when I spotted a group of Penang sketchers drawing there and decided to join them.

I woke up at 6am for this sketch. When I'm overseas, I like to wake early to sketch and move around. You can do more things in the day with the sun.

This is the view from the hotel corridor on the ninth floor where my room was. The corridor window was just beside my room's door and it was really convenient to have access to clean water for washing my brushes. And I was able to use the hairdryer to dry the piece quickly before heading down for breakfast.

On the left is Hotel Savoy Homann.

The orange traffic light stand at the middle was the first thing I drew. Then I started the sketch from left to right only to realise that the perspective wasn't quite right. The red car in the centre was supposed to be on the main road instead of driving into the stand.

Masjid Raya Bandung mosque was huge and had an equally huge artificial grass lawn in front.

There were probably hundreds of people were enjoying themselves that Friday afternoon. It was equally as crowded on Saturday when we went back there. It's a community place where families come to chat, and kids to play.

Even though it was cloudy with occasional sunshine, it was still quite hot and I'm surprised at the number of people I saw.

I'm not sure what I'm trying to show here so I'll just talk about how I manage to sketch so fast, to be able to fill 45 pages during the four days I was there.

The first thing is I was just using an A5 sketchbook which is much more manageable than drawing with an A4 sketchbook that opens up into A3. Secondly, most of the sketches were drawn across two pages so I made less sketches with the same number of pages. The third is simply to just draw.

The opening ceremony for the Bandung sketchwalk was held at the City Hall, the office for the mayor. Interestingly, the mayor of Bandung is an architect who's also into sketching. The opening involved him sketching alongside representatives from other countries.

My sketch was drawn one hour before the opening. It was cloudy and the tree did not cast any shadow. I added the shadow to hint at the time of the day. 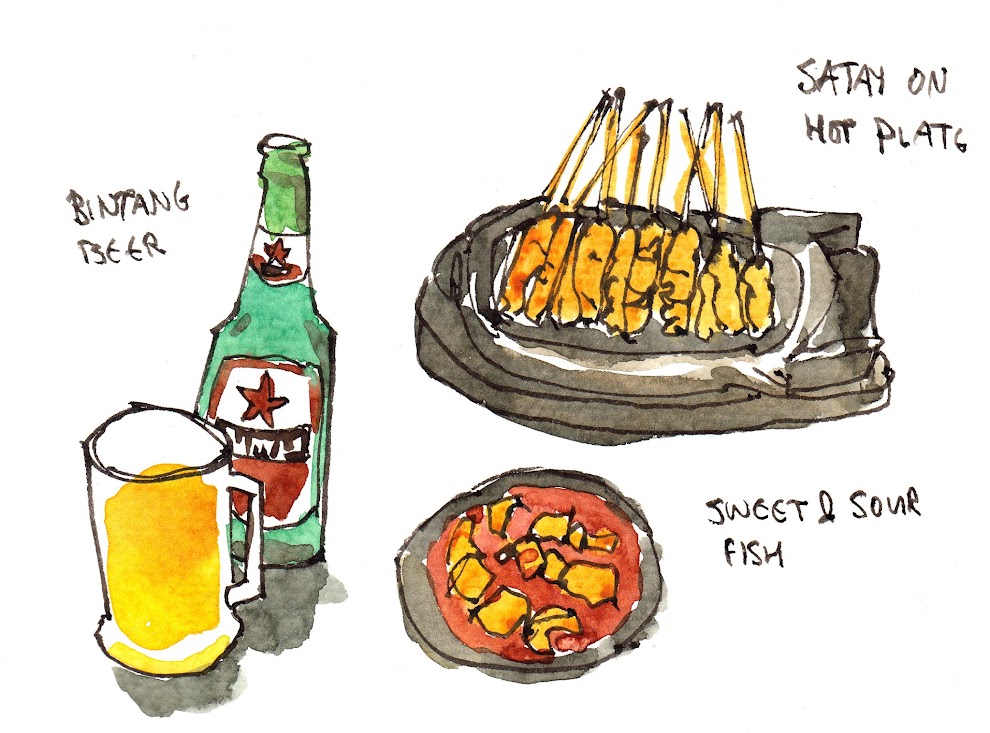 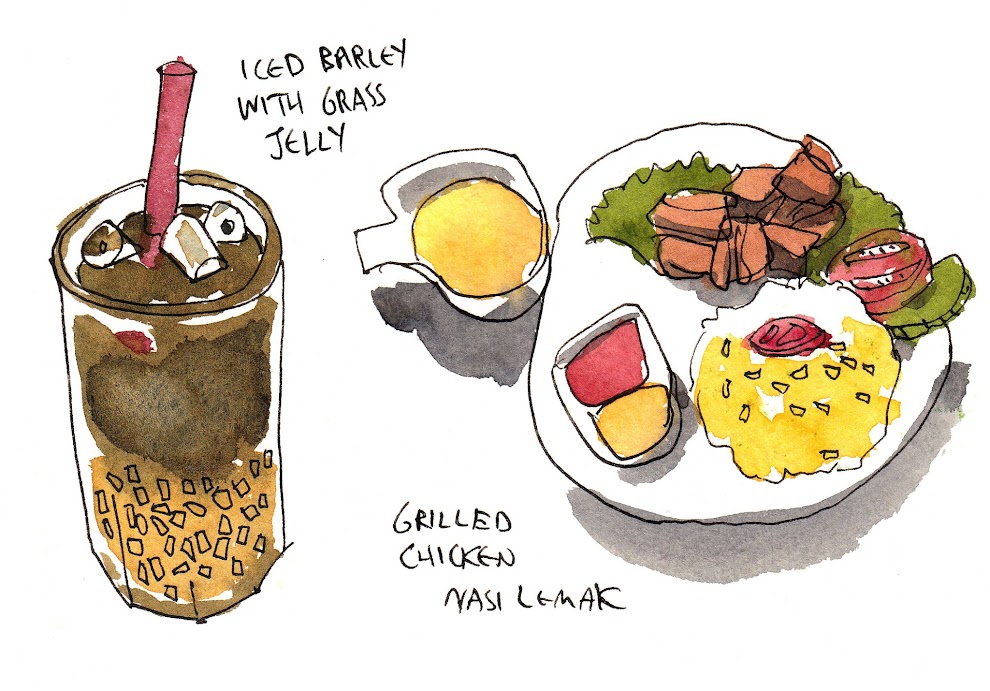 Some of the food I ate while in Bandung. 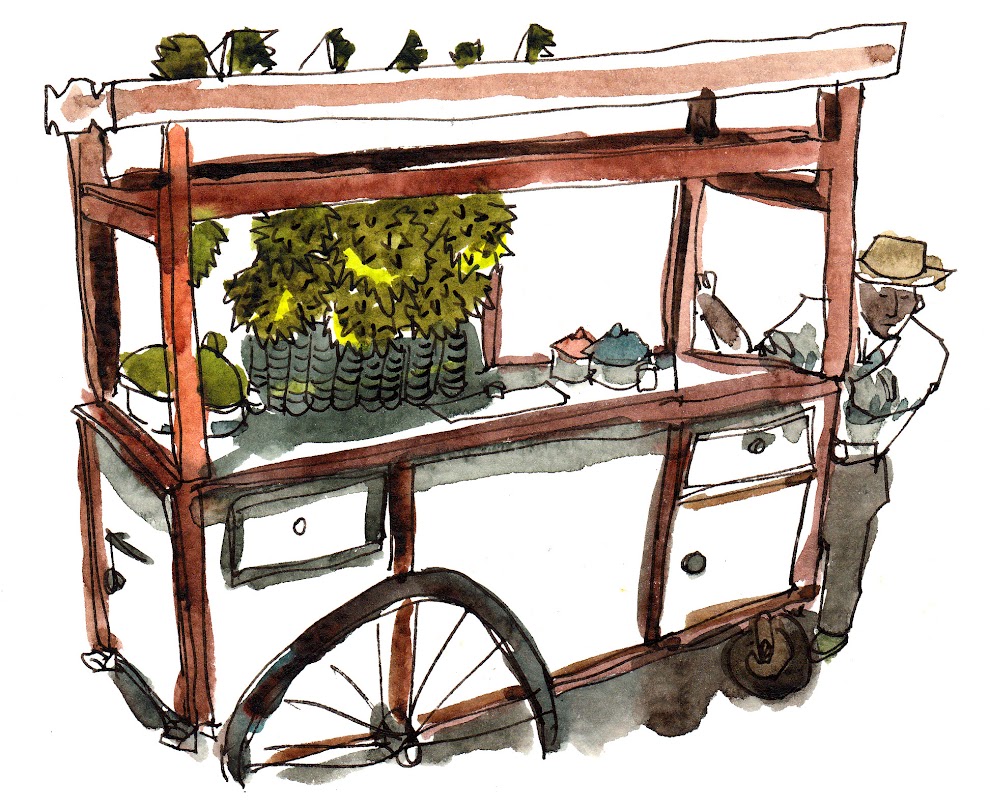 This durian ice cream vendor was outside a popular Chinese roadside restaurant (map) that sold noodles.

We were brought there by Renalto, an Indonesian sketcher. The food was great. Be careful about ordering spicy food in Indonesia. Their spicy is like 9 out of 10 on the spicy scale. My friend Chris Ng ordered a spicy bowl of noodles and did not feel too good by evening time. Another friend Ban Pang left most of his noodles untouched.

On first day of the official sketchwalk program, we were brought by the volunteers to the mosque area. Since I've already drawn the mosque from the front, I drew the buildings by the side instead. 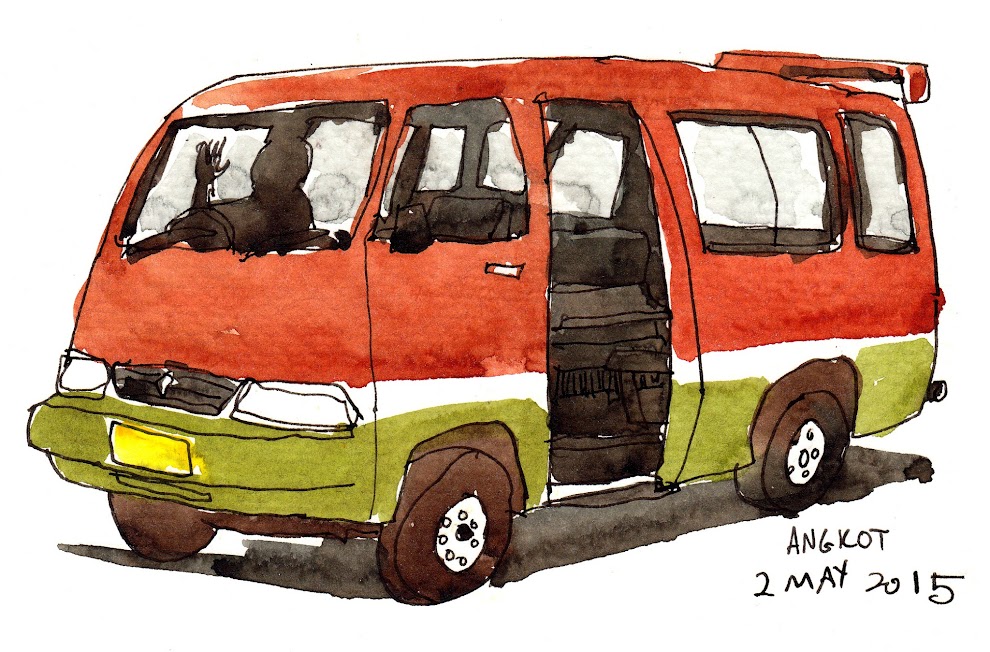 This is an Angkot as I was told. I saw many of these mini vans driving people around. 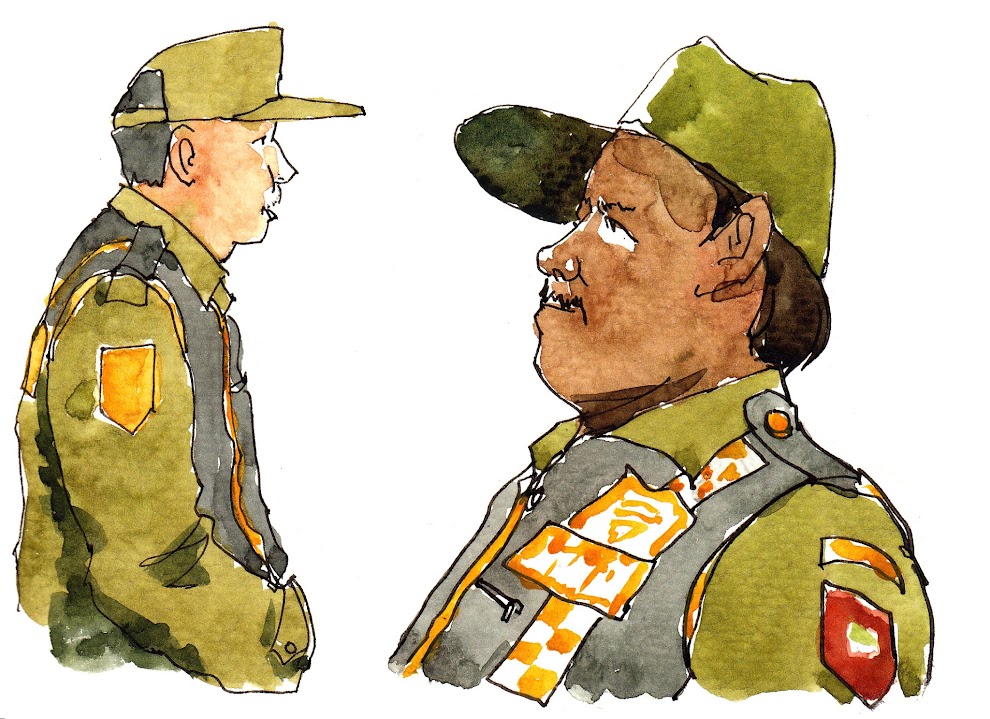 There were many security personnel at the mosque. I asked for permission to sketch them and one posed for me. They seemed quite pleased with the sketch. 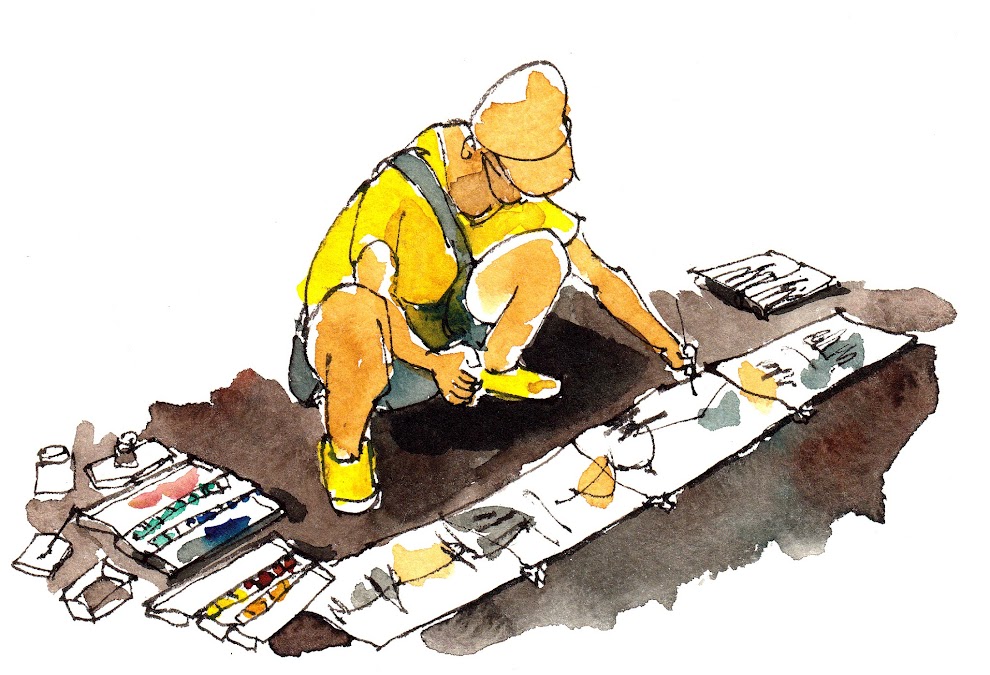 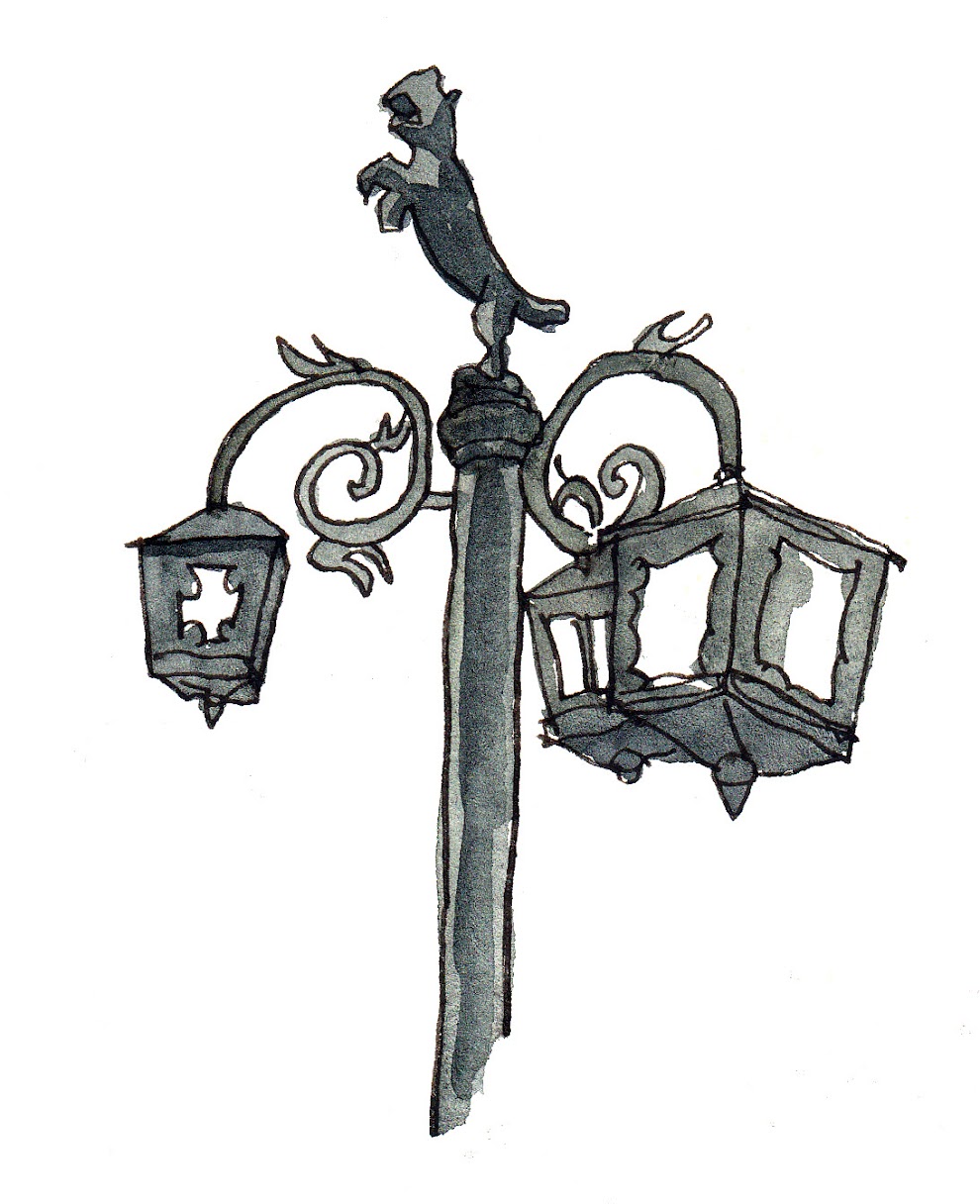 The old school lamp posts had some sort of panther at the top.

Crossing the roads in Bandung can be quite dangerous. I almost got knocked down by a motorbike as it zoomed out from behind a big black car that blocked my view.

It was raining heavily so I had the time to embark on a detailed sketch like this. What you see in the foreground is the Cikapundung village by the side of the river. Those vertical lines are actually huge tall buildings at the back.

This is also Cikapundung village but this time I drew from the ground floor. It was still raining. Sketching is a wonderful way to spend the time while waiting for the rain to stop.

On the left is the other huge bamboo art installation I was talking about earlier. The church on the right is Bethel Church.

The third sketchwalk session brought us back to the City Hall. This time I had the time to sketch the park inside.

I love the huge trees in the park. For this sketch, I drew the branches with brush first, waited for the paint to dry before outlining them with ink. It was much easier than drawing the outline first and filling in the colours. 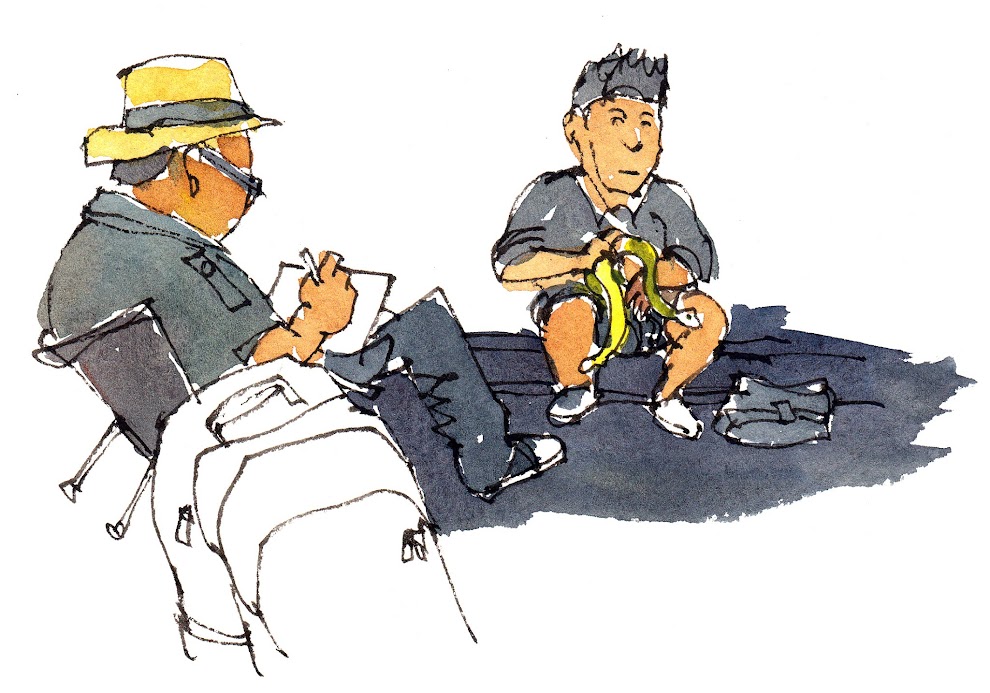 On the left is Rob Sketcherman from Hong Kong drawing the snake handler in the park. I used the Duke 209 fountain pen and did not quite like the dry stroke effect on this paper. 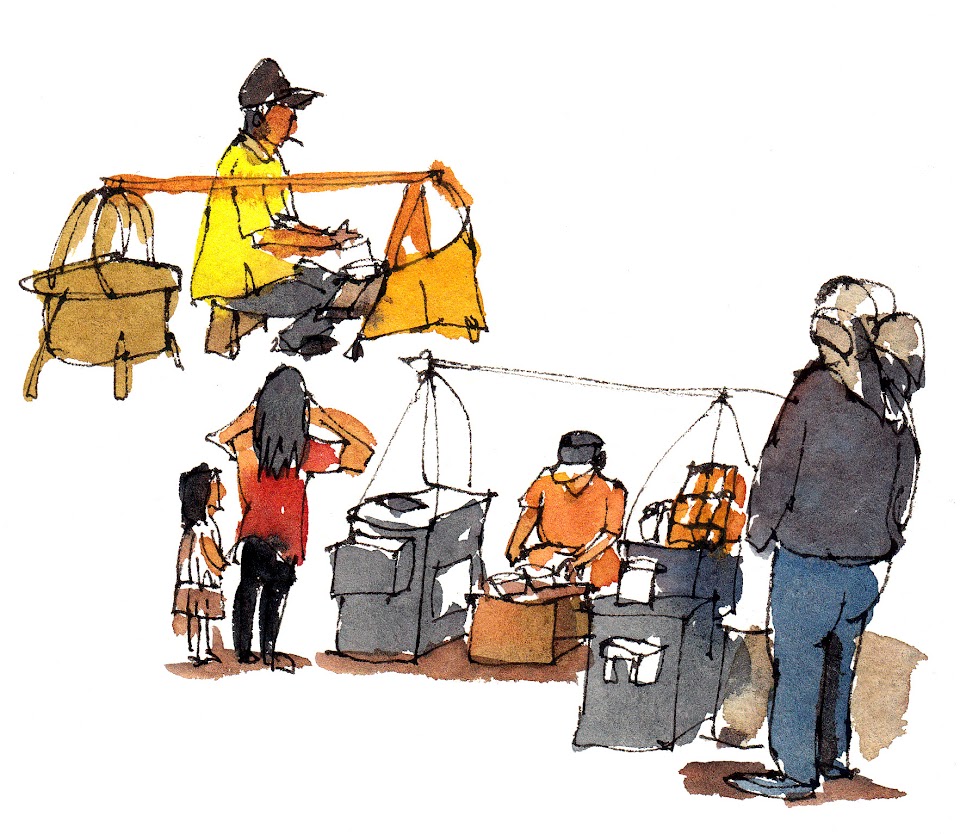 Food vendors in the park.

When it started to rain, we ran to the nearest restaurant for lunch and more sketching.

This scene caught my attention because of the number of people using their mobile phones.

Generally speaking, when I'm overseas I try not to use my phone unless I need to check the map. I feel that every minute I spend on the phone is every minute I'm not in that country. I can always check Facebook when I'm back home.

This is Jalan Braga, the main street of activity in Bandung.

I walked past these huge letters for three days and only figured out what they were on the last day. They spelled Braga which is the name of the street. I was wondering why there were so many people taking photos in front of the letters with a rather dull building behind. 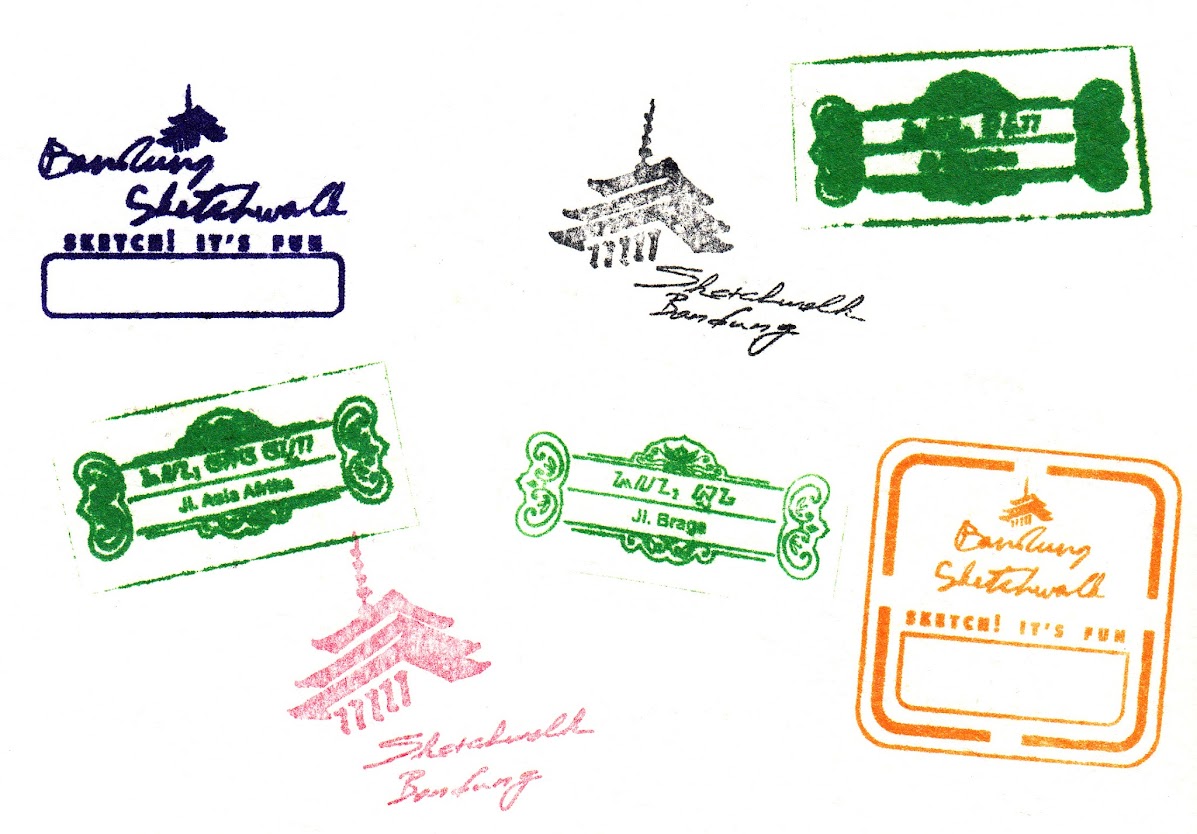 Stamps created by Bandung sketchers. I've a friend who stamped too many of her pages and did not manage to fill those blank pages with sketches. 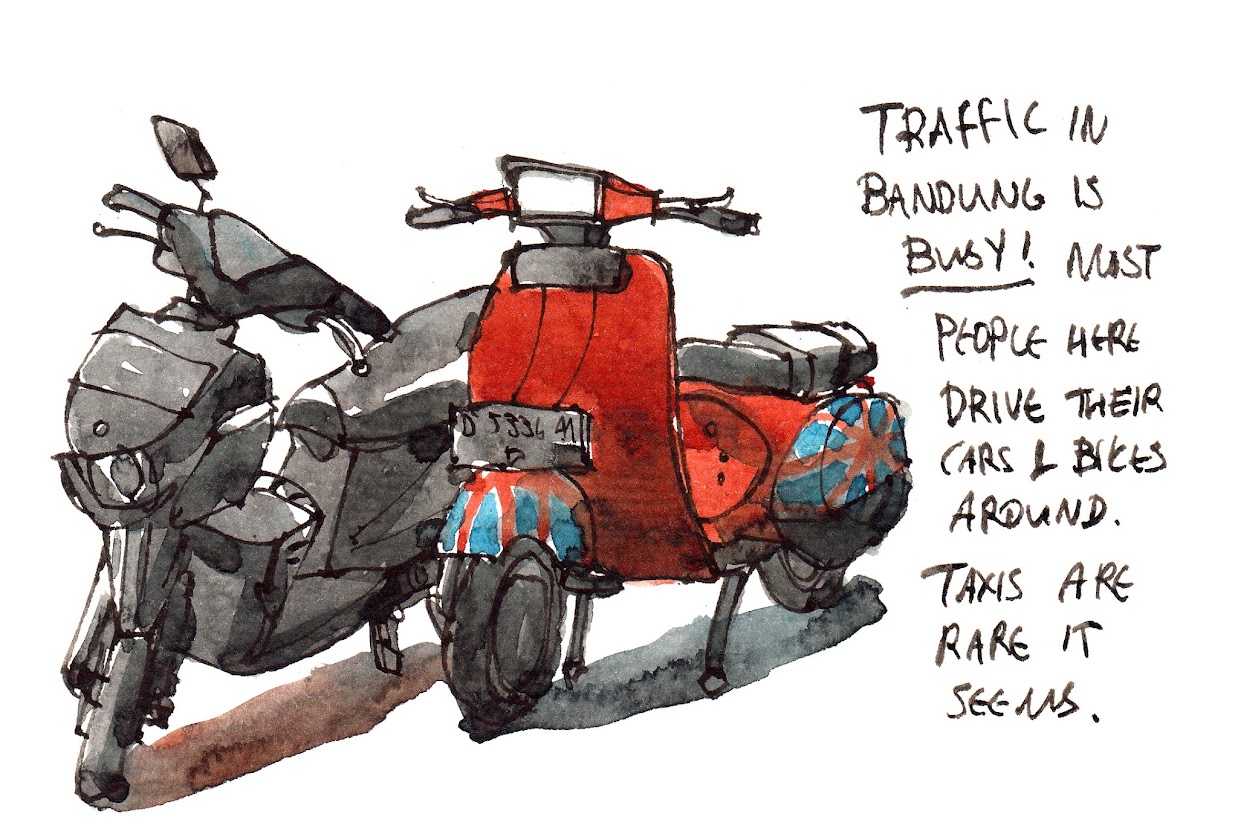 Last page of the sketchbook was sketched on the first day of the sketchwalk. Most people here in Bandung travel with their motorbikes and cars. Taxis were quite uncommon.

That's all the sketches I drew in four days. The text was mostly written on the plane. Writing and sketching are two fantastic ways to make time fly.

My Bandung Travelogue e-book is now available for download at https://payhip.com/b/tBFb

Here's the link to my other sketch trips:
https://www.parkablogs.com/tags/my-travelogue