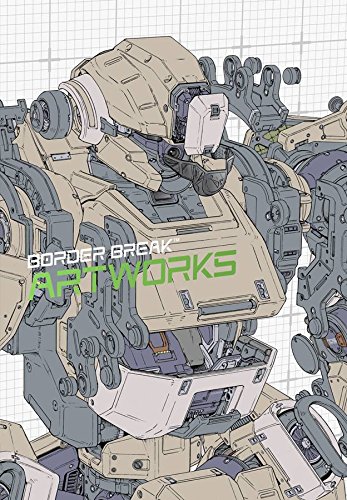 Here's another Japanese artbook that Udon has translated to English. The original book ボーダーブレイク アートワークス 2006-2012 was released in 2012.

The book's a 176-page paperback that features the concept art for the game Border Break that was released in 2009.

Highlights of the book are the mecha designs. There are actually several artists working on the robots. The designs for 17 Blast Runners includes plenty of technical drawings and line art looking at the iteration and different parts from head, body, arms to legs. Every part of the design is well defined and in detail. The cutting, the way the metal bends to form the mechas are very convincingly done. The mechas look very military to me which is expected because these are guns and sword welding robots.

The Blast Runners included are

There's also a chapter on the weapons used which consist mainly guns and other props.

Character designs for the pilots are mostly sketches. Only the uniform concepts are drawn in more detail and in colour.

Environment are mostly just screenshots, the CG looking type, from the game The world of Border Breaks actually looks good, just that the included environment art and the composition they use don't really make the game feel epic enough. Anyway the pictures are printed small.

This is a book for fans of the game and those who like mecha robots.