I only got to know about Prima Marketing watercolour sets when I read about them on the Wetcanvas forums, and also while I was searching for empty watercolour boxes on Amazon.

From what I read on their website, Prima Marketing do make other art and DIY supplies, mostly for crafters from what I can see.

Prima Marketing has three watercolour sets, namely The Classics, Decadent Pies and Tropicals. I choose to buy Tropicals because the colours look more intense. If you paint a lot of confectionary, then getting the Decadent Pies set would be more appropriate. LOL. 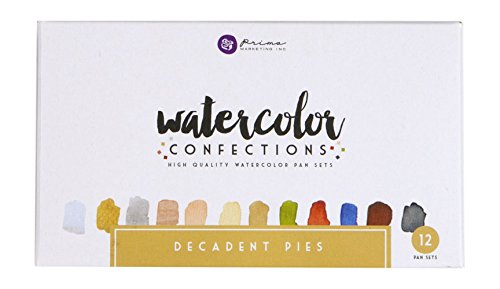 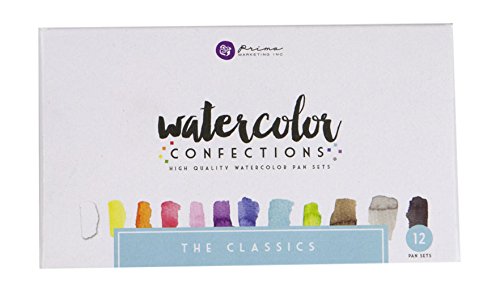 The Classics set. There's a white!

One thing that's missing is information regarding the pigments and binder that's used to create the paints. There's also no info on their website.

By the way, the paints are made in Korea.

When you first open the box, the pans are wrapped up.

Each pan is only identified by their number code. And you can't match that code to any names because there aren't any on their website.

The metal box is nice. When you look for empty watercolour boxes only, they usually cost around US $20. Well, this box set also cost the same price, but you also get watercolours so it's really value for money.

There are many things I like about this box. One is the space between the rows of pans is larger. Large enough for you to fit two pocket watercolour brushes, because sometimes you might want to bring a small and big brush. Large enough to fit in another row of watercolour pans.

The metal plate that holds the pans can also be removed when you want to wash your palette.

Corners of the lower flap are also higher which prevent water from rolling off the corner.

These are the colour swatches I painted with the colours. They are more intense than I expected. Most of the colours are transparent or quite transparent, which is another good point, so they are quite easy to mix without losing transparency.

If I compare the colours to other brands, the equivalent colours in this box sets would be

The colour selection is quite good except for the inclusion of three greens. Difference between the two blues are not obvious.

I like the Yellow Ochre is included. It's a useful colour that you can use without mixing because it's already dulled down so that it's not that glaring. It's also a good colour for mixing skin tones.

You can get gray tones with the green and red mixtures, and also with the blues and brown.

I don't usually use purple but the one included here is intense and can mix with yellow to get a colour close to black.

Here's a simple sketch painted with the colours. I like the transparency of the colours. Since I create mostly pen and ink sketches, transparent watercolours allow the lines to show through.

Overall, for US $20, it's a good deal for the money. The paints' intensity is better than I expected. They dissolve and mix well. The only downside is the lack of information regarding the pigments used and lightfast ratings. But at this kind of pricing, I really can't complain much.

You may buy this for the metal box, you may end up liking the colours.

It seems that these box sets are currently sold only by the US branch of Amazon. Here are the links to the different sets: Tropicals | The Classics | Decadent Pies | Pastel Dreams | Shimmering Lights

Hi Teoh, I bought the Tropicals set a few months ago. In the set I got, there were colour names as well as numbers. The colour names are quite fanciful. Here they are, with your guesses in ():

Thanks for your reviews and demos. They have been very helpful.

@Jim
So it looks like they have added names for the newer batches. LOL

@Tkishome
Thanks. That info wasn't available when I reviewed the set

Hi Teoh as a person who loves to layer watercolor paints especially glazing, I was wondering if I add another layer of paint will the layer that has already dried lift up Again??

@Bennabel
Watercolour is permanent when dry, so it will not lift up.

Hello Theo! I am a fan of your blog and would usually go here or watch your Youtube videos reviews before buying anything. I recently purchased this Prima Tropicals set, and some empty half pans to put in between. What colors from Daniel Smith would you recommend to add here so I can have more mixing potential. I usually fo nature journals and urban sketching thanks!