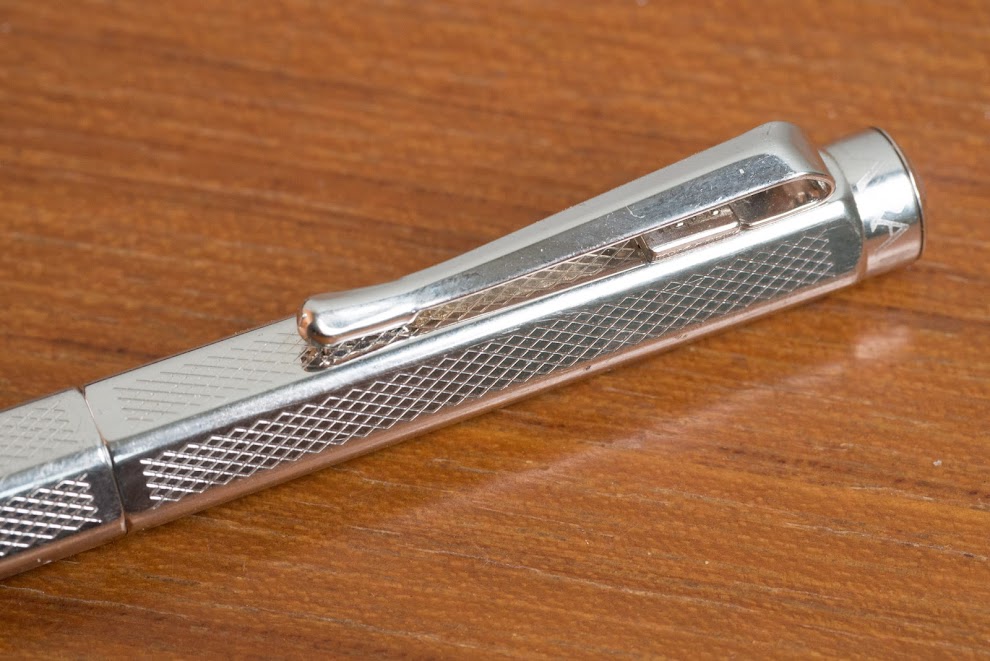 Caran d'Ache is a Swiss manufacturer of art and luxury writing instruments. It was founded in Geneva in 1924 when Arnold Schweitzer purchased the Ecridor Pencil Factory. Schweitzer named his new company after Caran d'Ache, the nickname of a French satiric political cartoonist (who in turn took his name from карандаш (karandash), the Russian word for pencil) - Wikipedia

This is the Palladium-coated Ecridor Retro fountain pen from Caran d'Ache. 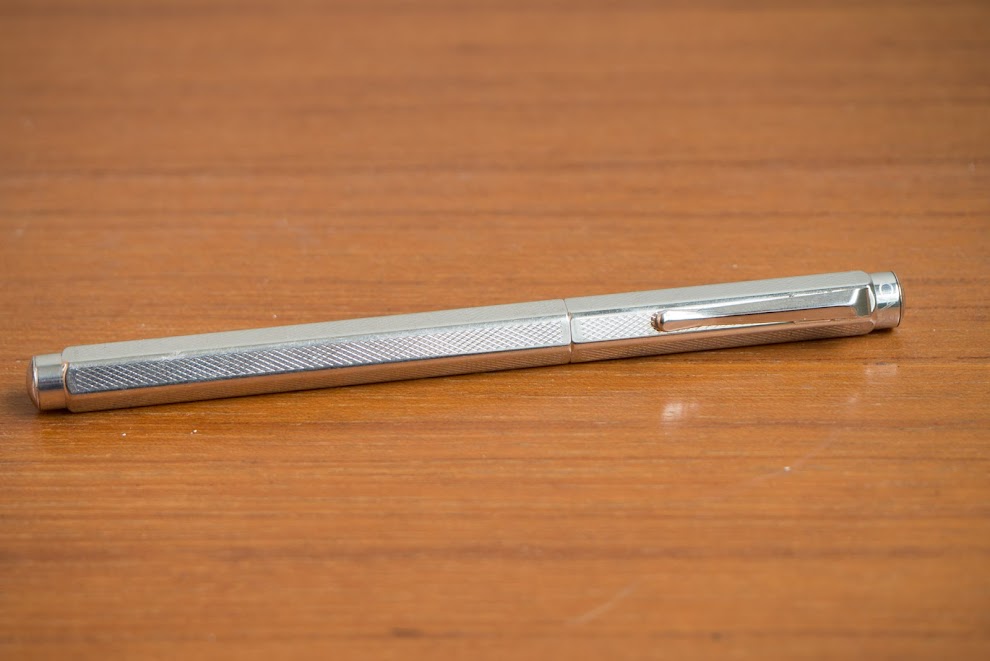 It's a normal size pen that has weighs more than it looks, and as a result feels quite substantial.

I'm not sure what's the metal they use inside, but on the outside it's coated with Palladium to give a lustrous silvery-white appearance. 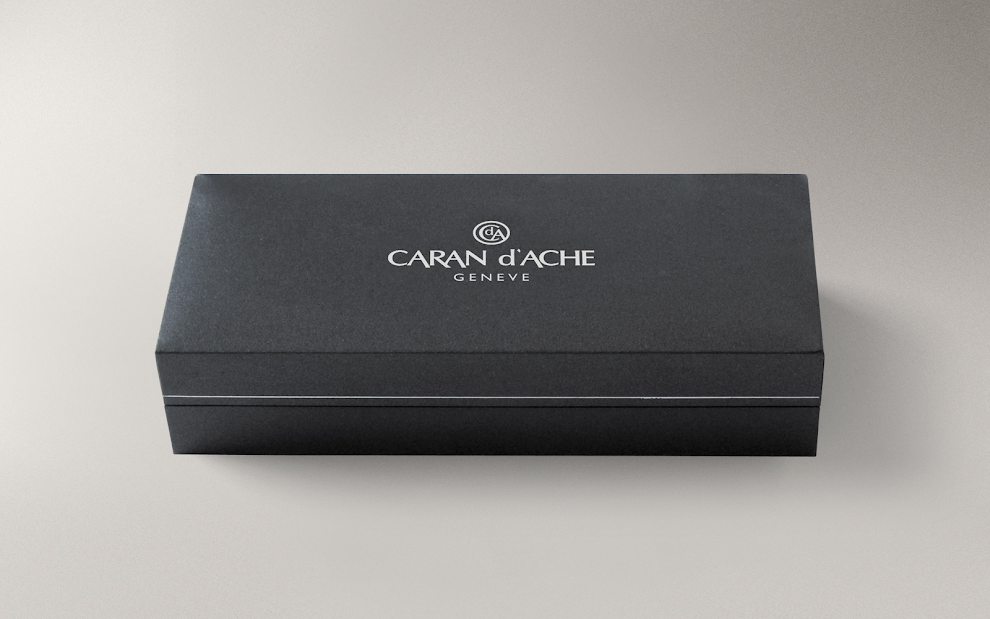 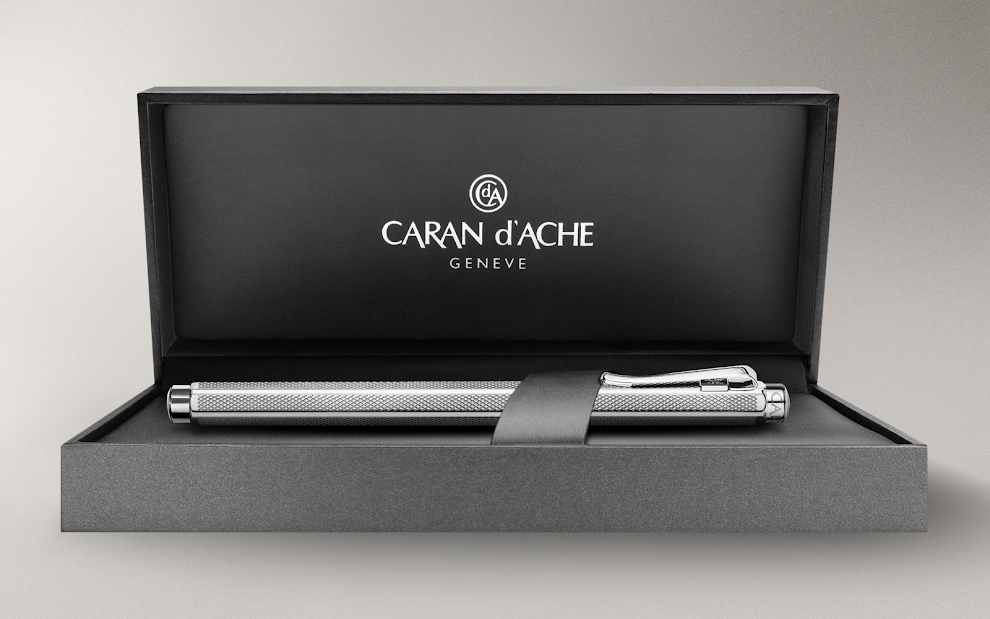 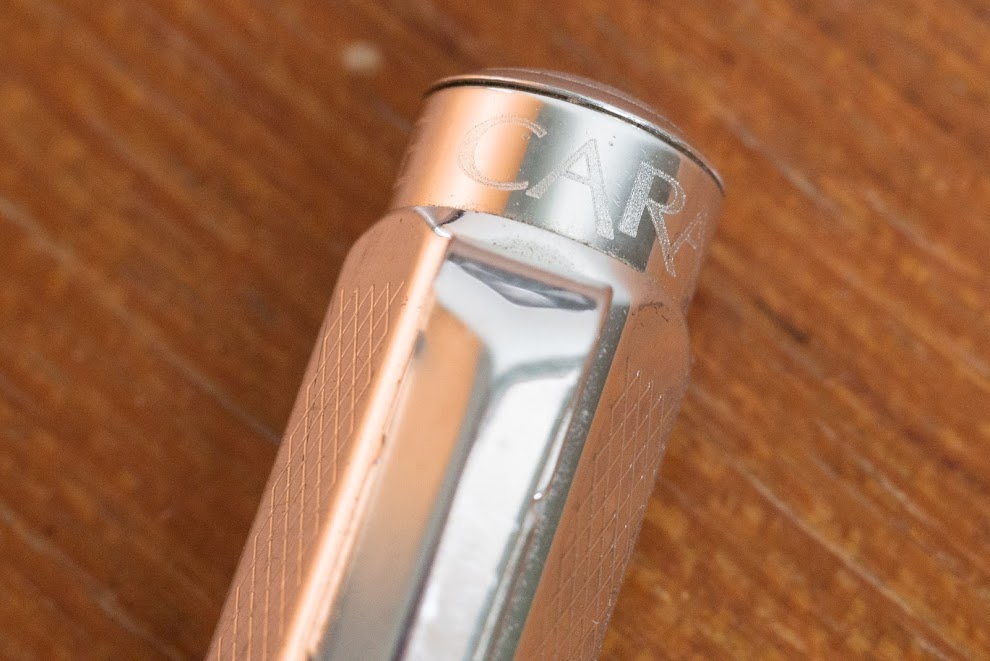 The company's brand is etch onto the top of the cap. 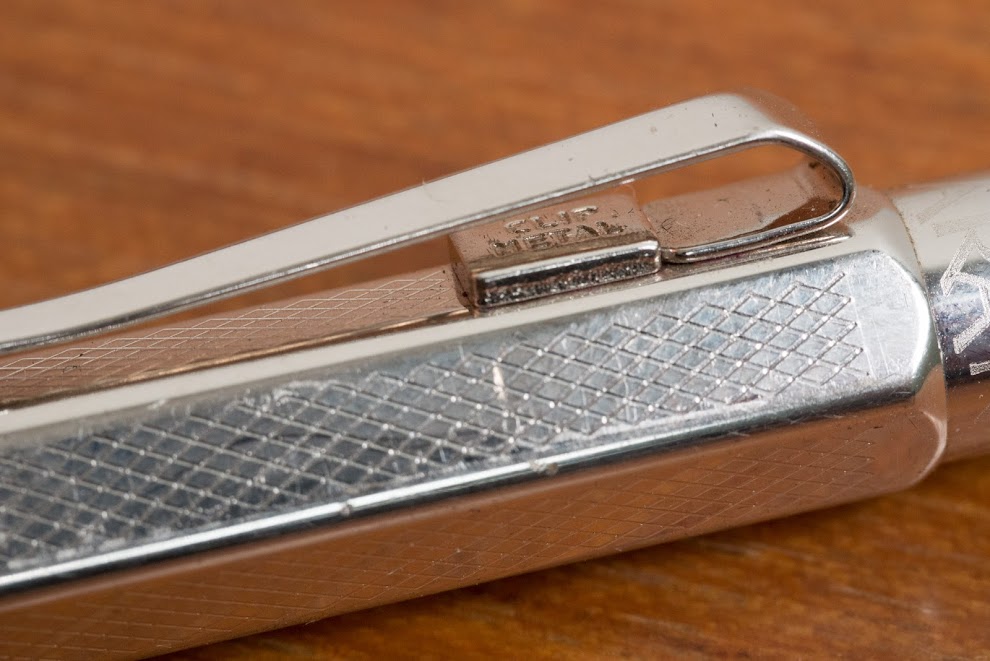 If you look closely behind the clip, you can see the words "CLIP METAL". Note that my pen is already decorated with little scratches and dents.

Design on the body of repeatable diamond shapes, reminisce of vintage models. The design pattern appears on the cap and body.

The pen cap is the click-in type with an audible click when you put it back on. 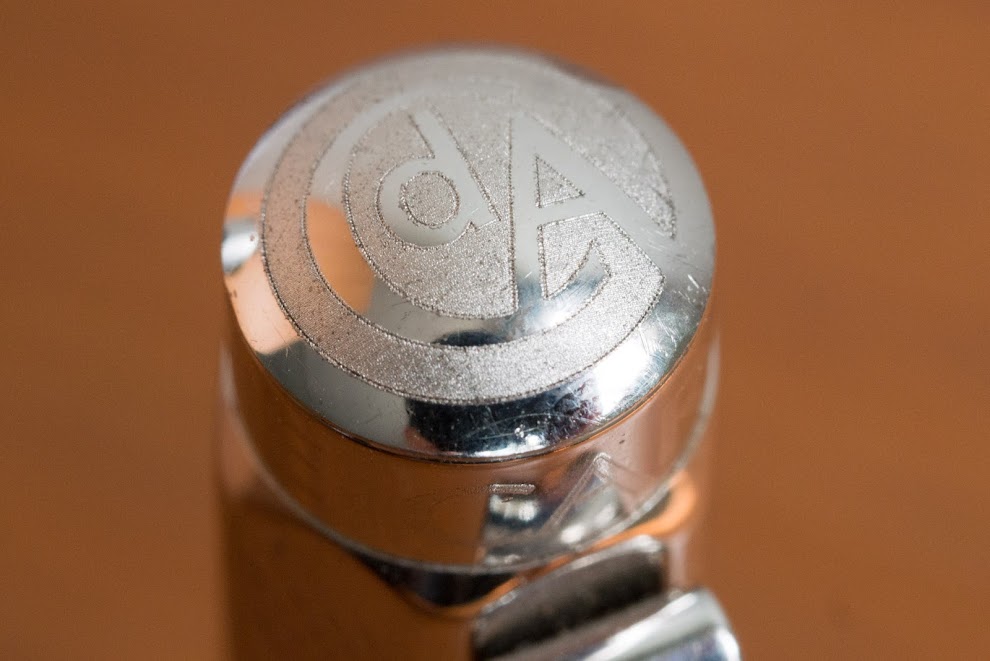 This close up does not truly show the beauty of the logo, but in real life it's beautiful. You can only see those cut edges with a magnifying glass. 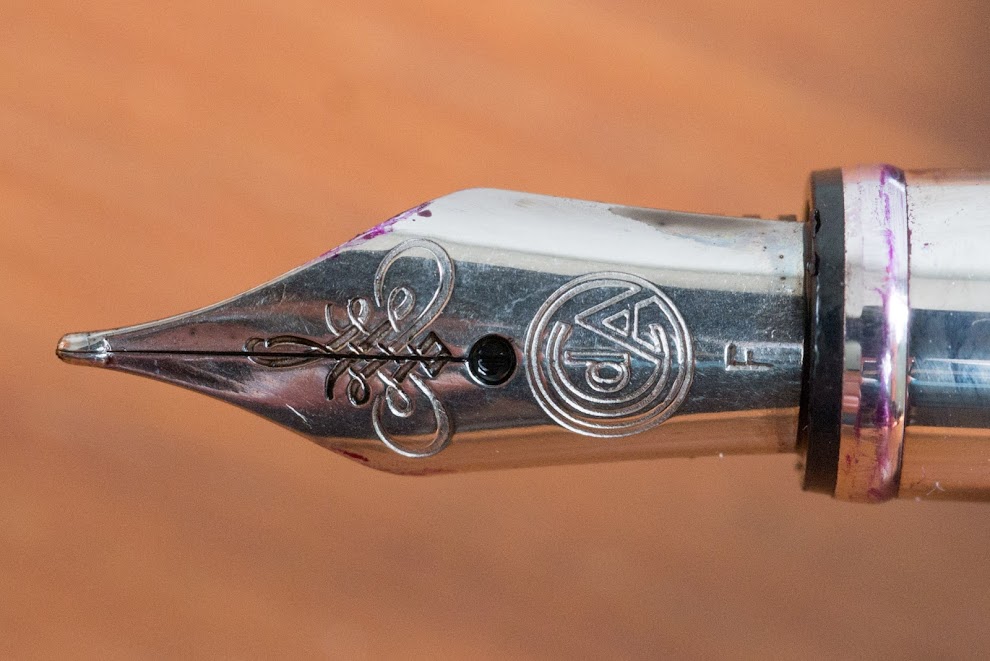 This is the rhodium-coated steel nib. The pen is sold with the choice of fine, medium and broad nib.

A beautiful carving appears across the slit. 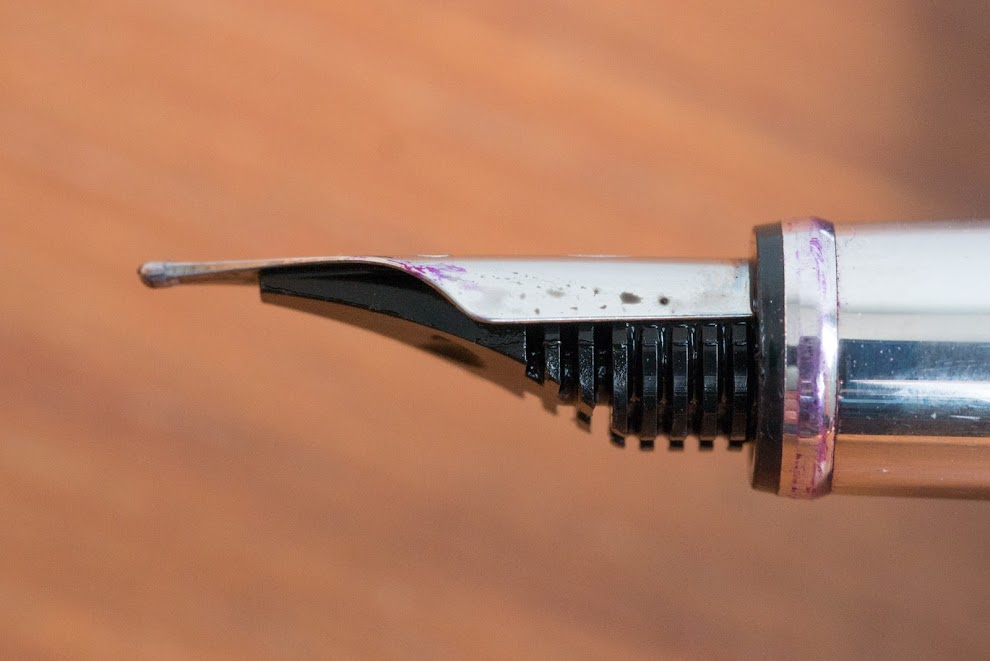 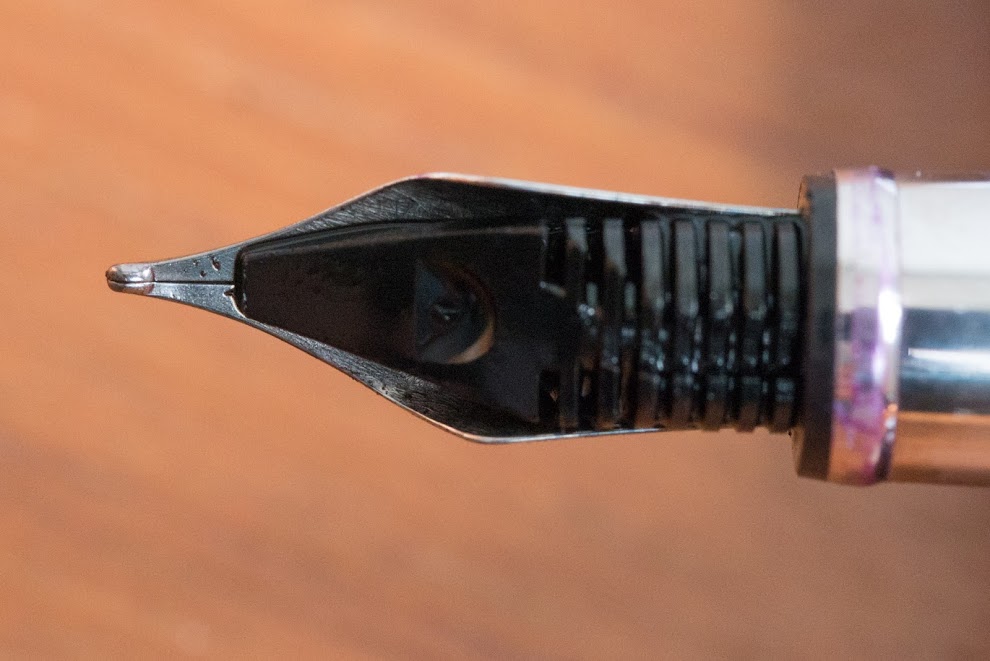 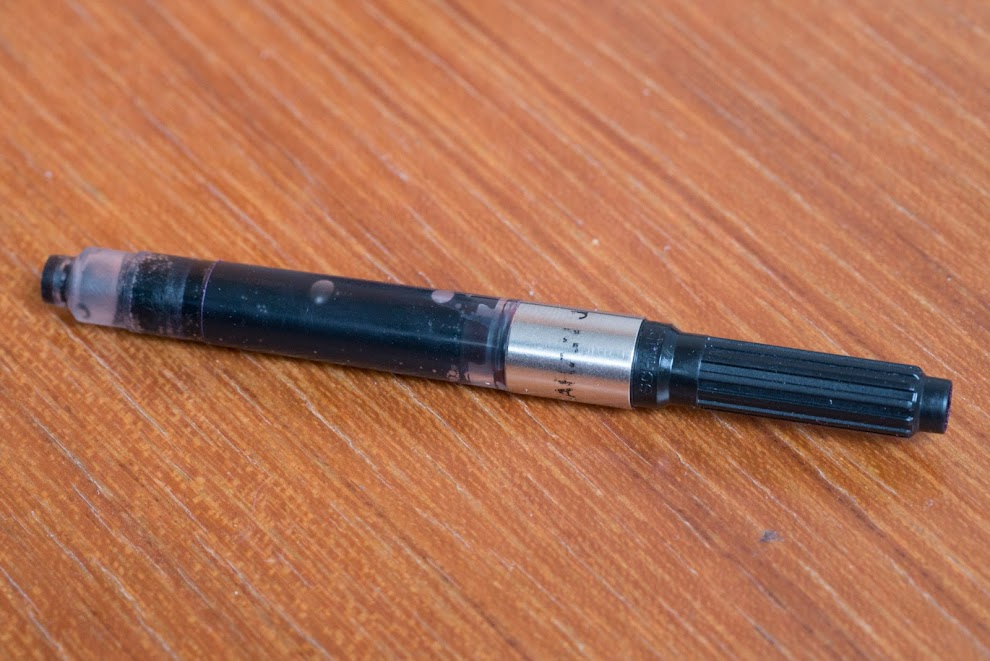 The pen comes with a refillable Caran d'Ache ink converter, twist-type. It's typical converter size, and for me, I would say it's holds a good amount of ink. 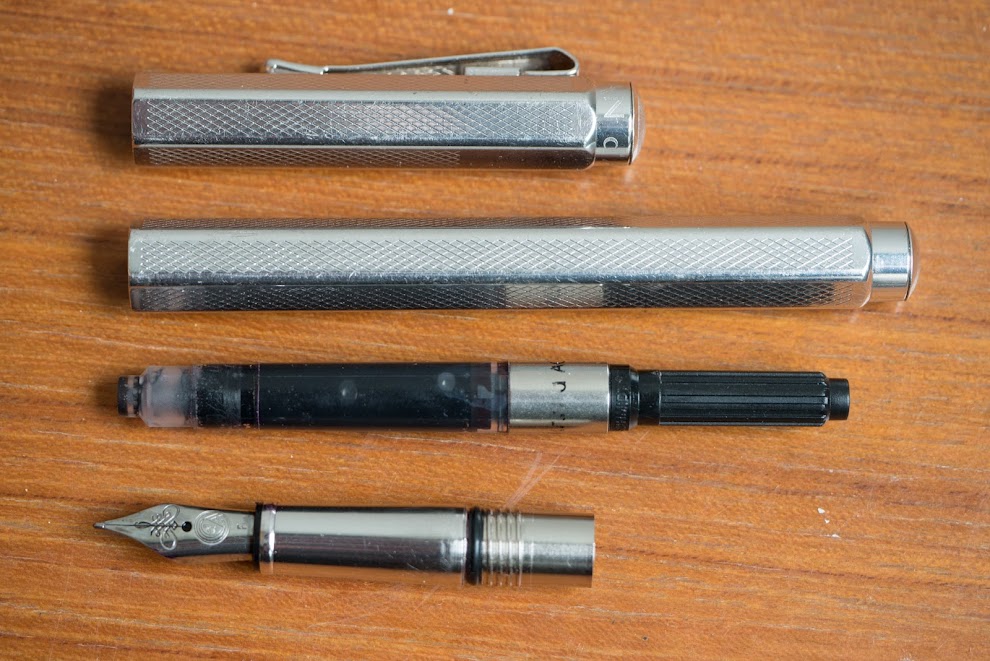 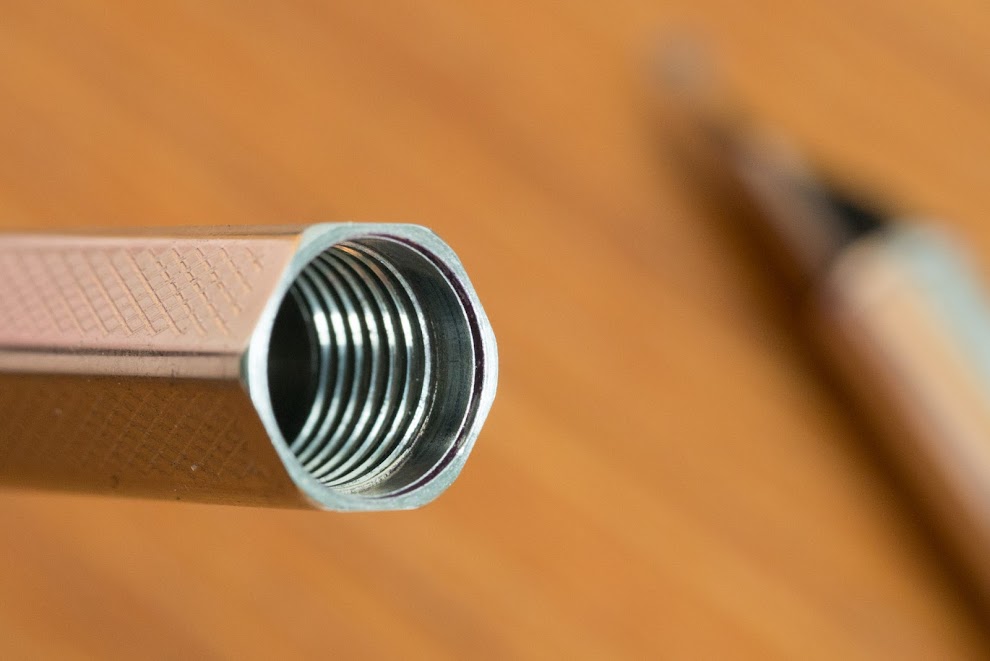 The interesting part of this pen is the hexagonal design. Could be inspired by those hexagonal pencils. It's nice to hold in hand. The face plate of the nib is on the same plane as one of the six sides. 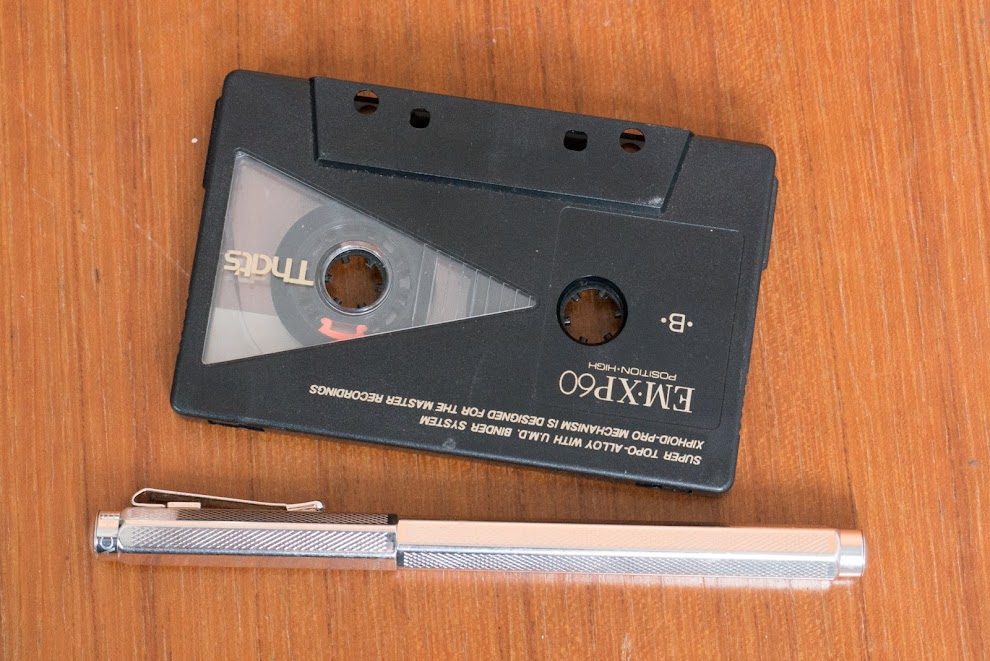 When I first saw the pen, I wondered if it could be used to wind a cassette tape. No, it can't, the body of the pen is slightly thicker than those wooden pencils. Jokes aside, this pen is not cheap and it comes with a lifetime warranty from the Caran d'Ache. 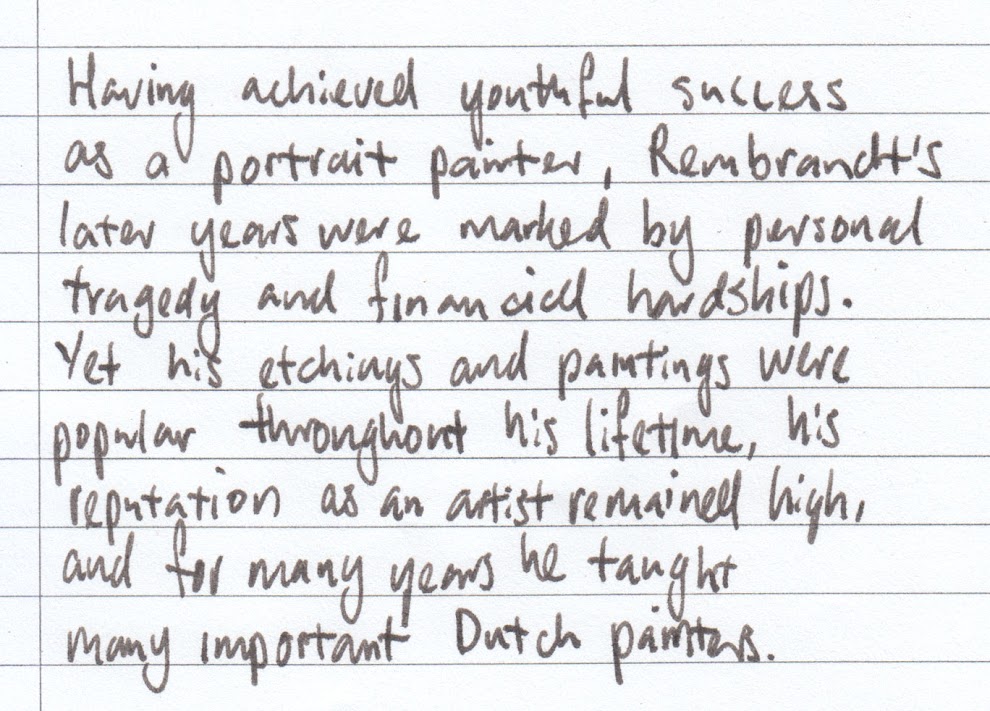 The nib glides smoothly on paper. Ink flow is good. Strokes are uniform and predictable. I used Noodler's Polar Black ink for the writing above. 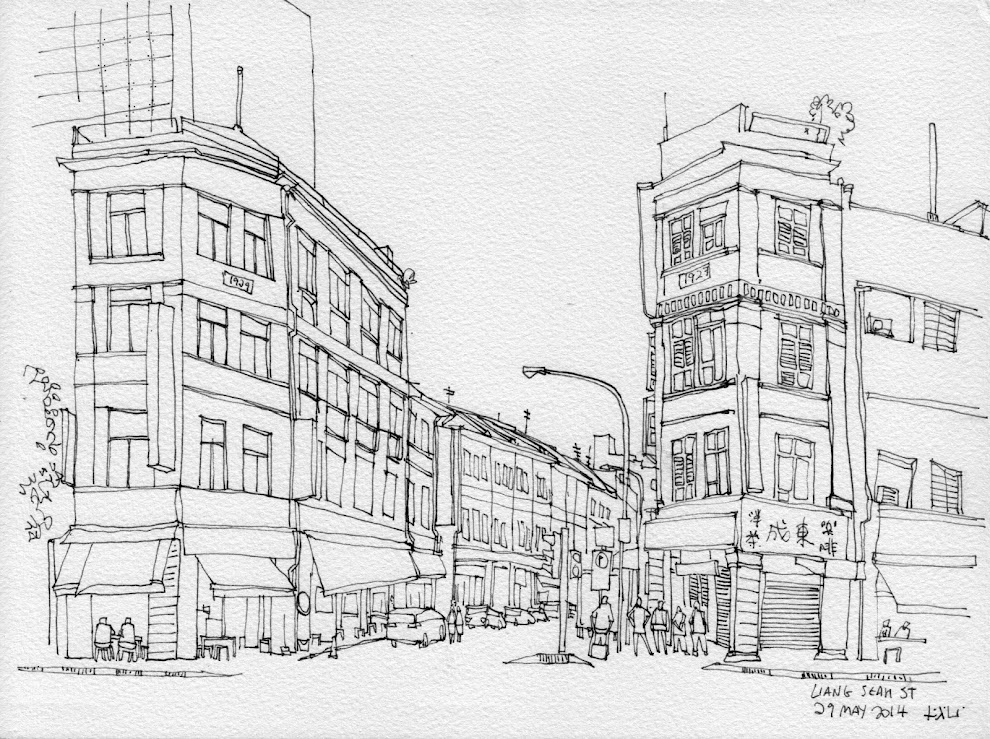 This is a sketch I drew with the pen. The nib works well on textured watercolour paper as well. 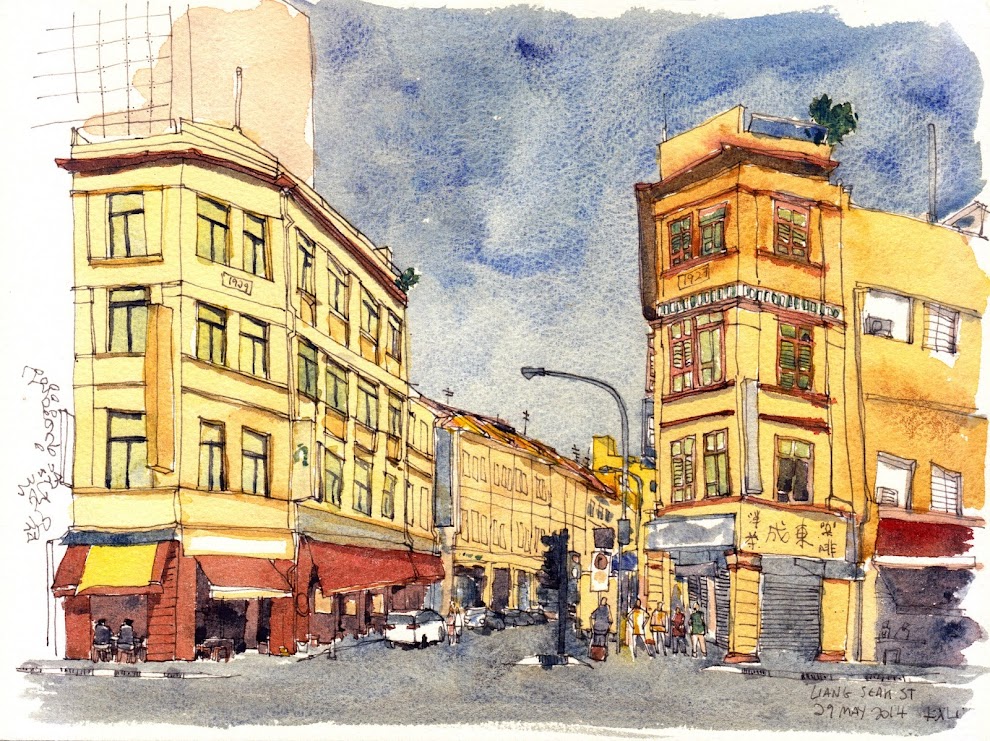 And this is how it looks with watercover over the ink. 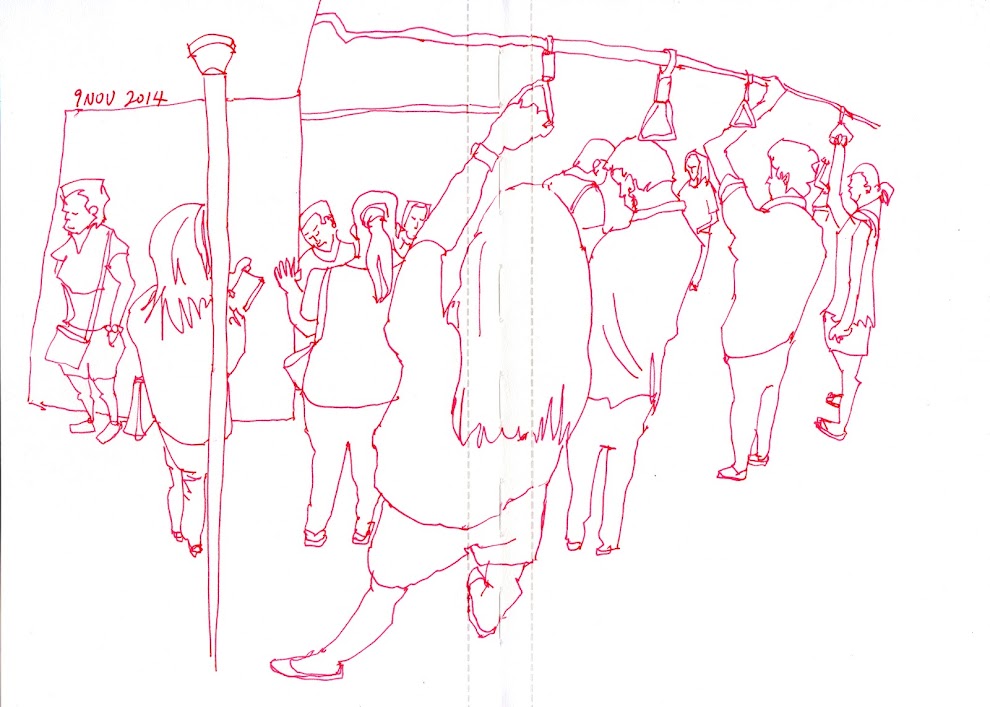 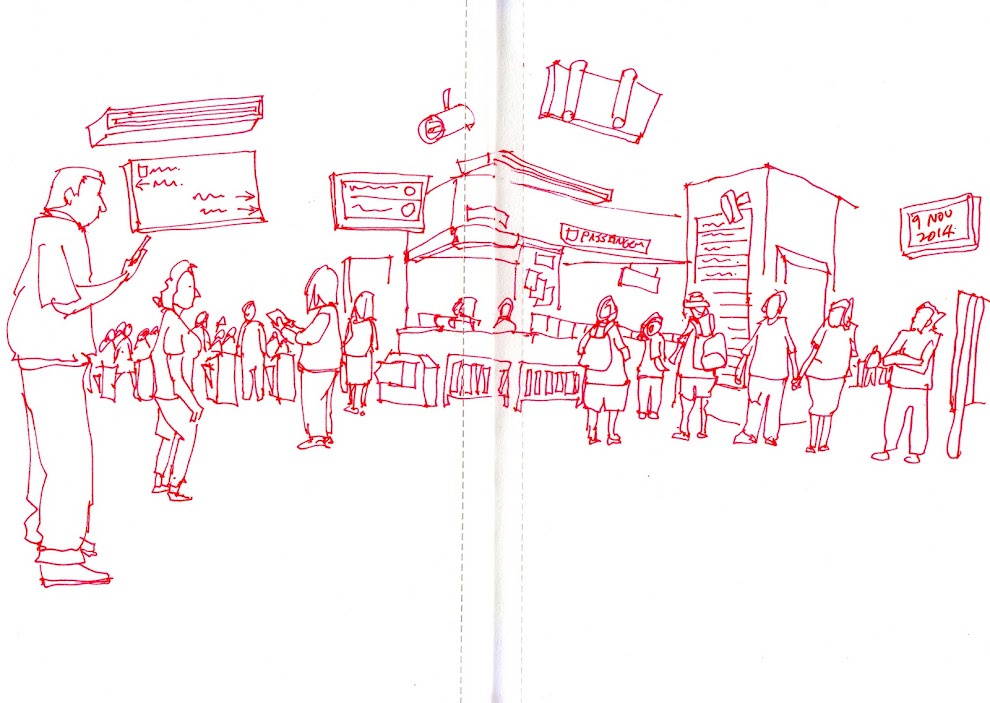 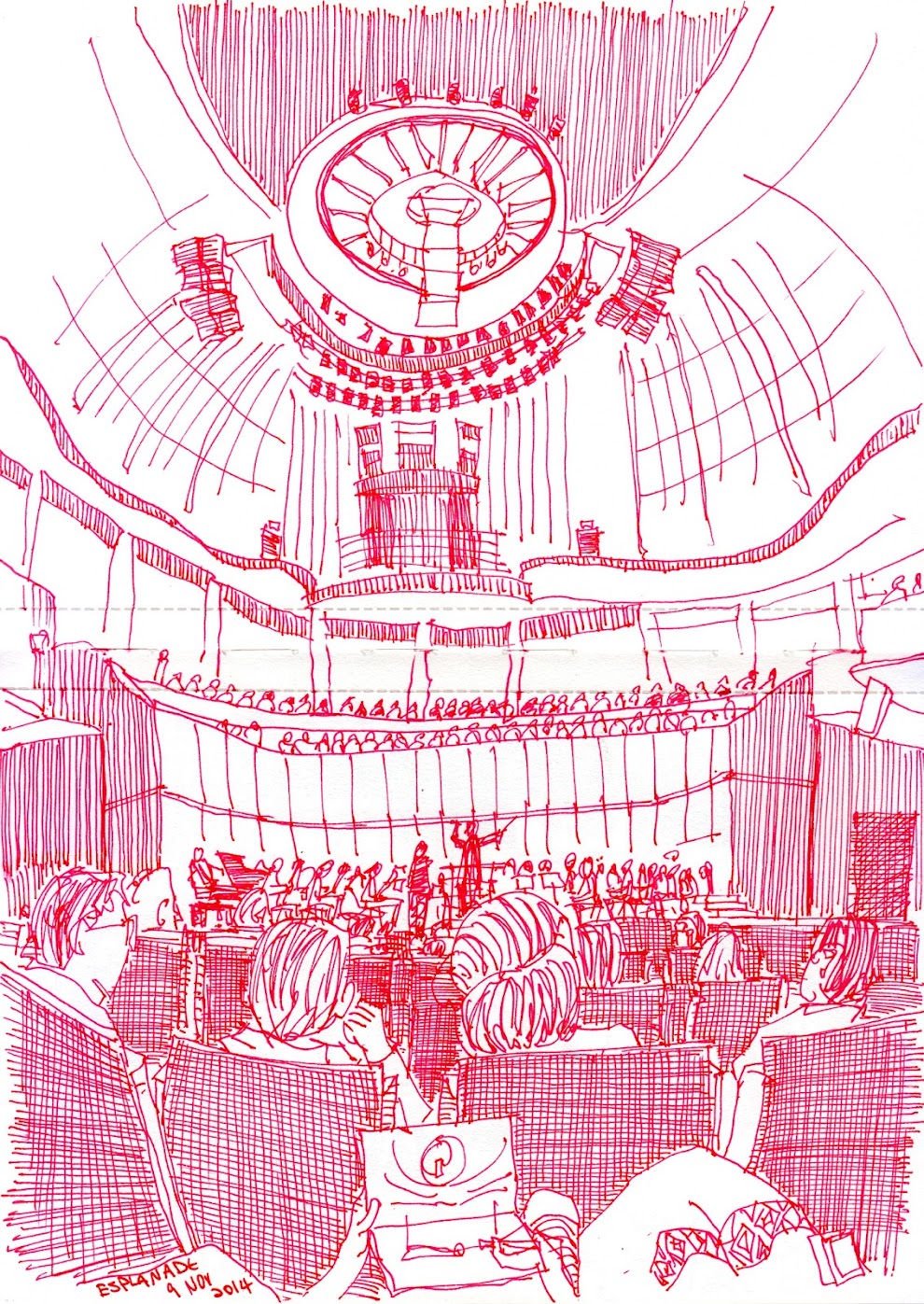 The three coloured sketches above are drawn with Iroshizuku ink. The strokes are pretty uniform, as expected from the stiff but smooth nib.

This is an elegant pen with a rather classic design that's inspired by metal mechanical pencils that Caran d'Ache made since the 1947. It looks good, writes well. it's pricy and it looks the part. Great pen.

This pen is available on Amazon.com | Amazon.co.uk | Amazon.de

Body and cap made of solid brass, silver-plated, rhodium-coated