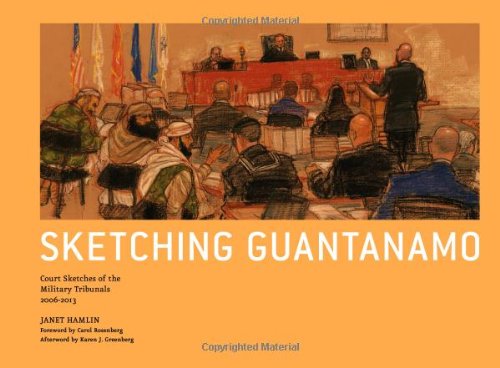 For a period over a few years, sketch artist Janet Hamlin traveled to Guantanamo Bay to sketch in an American court tasked to give trial to suspected terrorists of September 11.

Sketching Guantanamo is a raw account of what happened as captured in sketches at the Defense Department's Military Commissions, the tribunal chambers at Guantanamo Bay.

It's an incredibly detailed account and documentation of what happened in the court. The overall impression I get was the mood is very oppressive and serious. There was lots of censorship. Officers often have to get Janet to erase or smudge details so that people could not be identified. She can't draw the jury even using outlines or silhouettes. It's really difficult to work in such an environment where people are always looking over your shoulders and have the power to censor your work.

As for the people under trial, there's the 15-year-old young Canadian who turned grew into manhood while being held for years. There's Khalid Sheik Mohammed who said he orchestrated the 9/11 attacks, and who was waterboarded 183 times in CIA's dark sites.

Janet also tells us what her stay at Guantanamo Bay was like. She had to share a big make shift tent with other journalists. After her sketches are cleared for publication, she has to go to this huge hanger that acts as an office space for media outlets to send her work digitally back to her office. Knowing how much effort and the situation she has to work under really gives me a strong sense of appreciation to what she did. She also goes into detail talking about how she creates those drawing, using what materials and the time she has to work with.

Overall, it's an excellent sketchbook account of one of the most infamous and heavily censored trials in U.S. history.