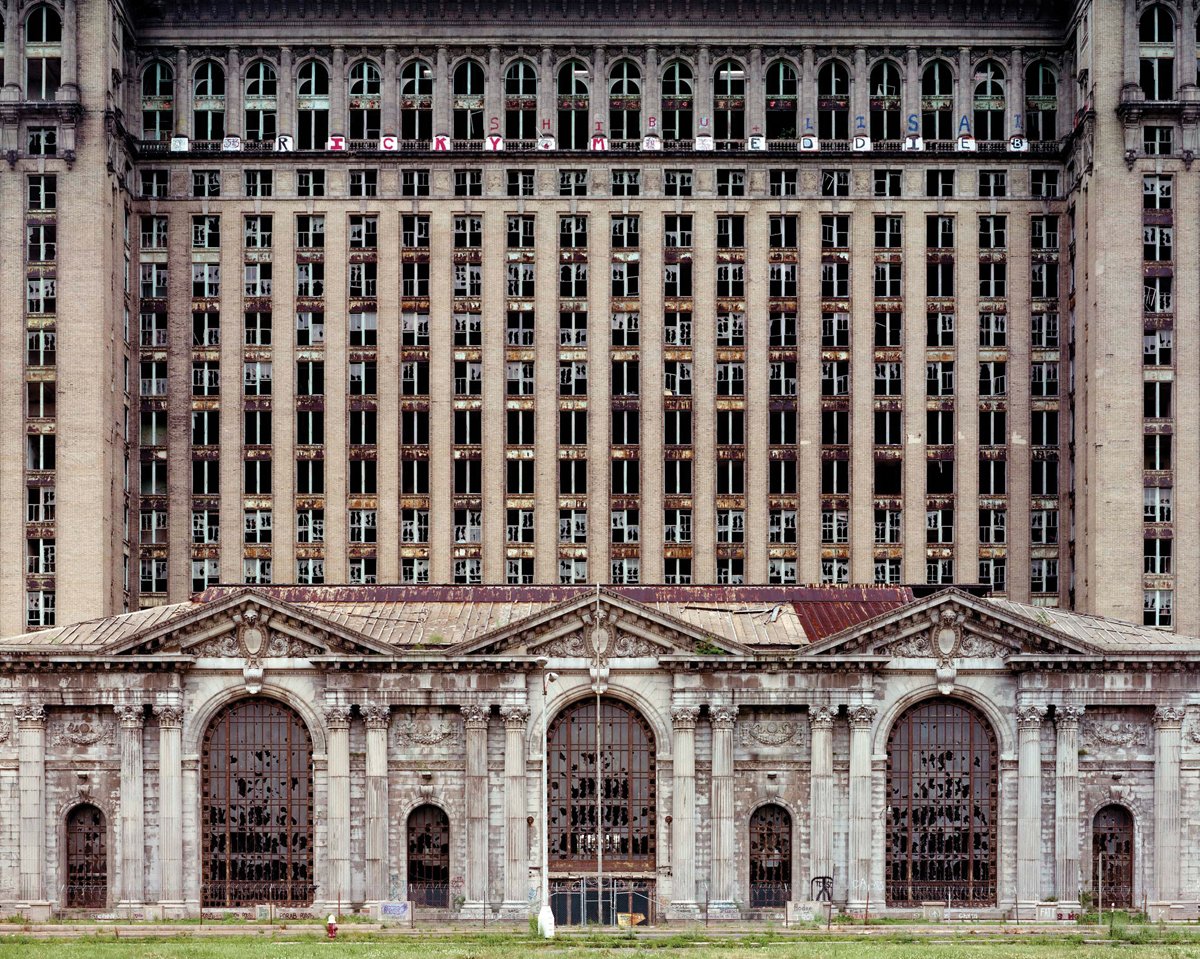 It must be galling for an art book publisher, spending a lot of time and money on a title, only to find that a very similar book is published at the same time. This happened in 2010 with two excellent photo books covering in detail the ruins of Detroit.

I bought Detroit Disassembled: Photographs by Andrew Moore first and thought it rather impressive with seventy photos in a landscape format but Marchand and Meffre's book is a much more ambitious and comprehensive look at this fallen city with 186 large photos. As one would expect with photographers looking at the same subject there is some duplication. Intriguingly, right down to a wall clock in the Cass Technical High school, which both books show because it looks like a real life Dali melting clock face.

The photos in The Ruins of Detroit follow a sort of format starting with interiors and exteriors of factories then: interiors of commercial buildings; theaters and cinemas; schools; apartments; churches; police stations; hotels and more schools. The decay is just so overwhelming because this isn't just a few abandoned factories, which could happen anywhere but whole communities occupying hundreds of acres. The thing that intrigued me with Moore's book and this one is that so many of the photos show interiors: classrooms; dentists; libraries or a police office with everything still intact, though admittedly now strewn everywhere. It's as if the everyone just left in a hurry leaving everything behind.

One really strong point about these photos is that they haven't concentrated on lots of close-ups of abandoned detail. I reviewed The Blue Room with photos by Eugene Richards of empty houses on the Great Plains. Far too many close-ups of clothes and personal belongings completely diluted the sense of ruin that these tumble down houses possessed. Marchand and Meffre have stood back from this detail and allowed the overall ruin and decay to capture your eyes. Their photos do it so well too, with beautiful compositions, framing and color.

This has to be considered the perfect photo book. Large format (check out the Product Details) with a photo a page and mostly all the same size though there are six pages of houses that have four on each. Nicely for a quality art photo book there are detailed captions under each photo instead of the nonsense of putting them all on some back page. Another thoughtful touch are the occasional pages with some text to explain the subsequent pictures. The printing uses a 175 screen for the photos on semi-gloss matt art paper.

Photo books of ruins, whether in cities or in the landscape, seems to be an expanding genre but the two books about Detroit, especially this one, have probably exhausted the visual potential. I doubt anyone can improve on Marchand and Meffre's remarkable efforts in these pages.

The other ruins book.

Spread from the book's short introduction.

Right: the same house in both books. The bottom one is from The Ruins of Detroit.

Left: they just walked away, still leaving the schoolbooks neatly stacked on the shelves.

Probably fallen down by now.

The melted (Dali like) clock at the Cass Tech school in both books. The Ruins of Detroit is the bottom photo.

Two of the six pages with four shots a page.

Police station with (right) Polaroid mug shots all over the floor.