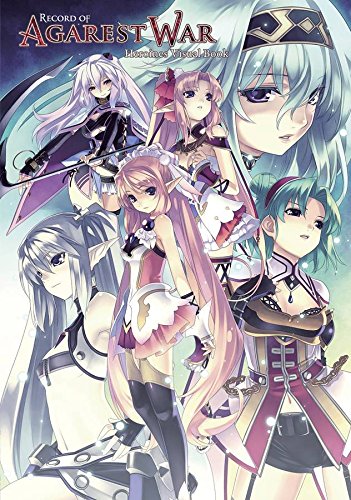 It's a book heavy on character designs that include different expressions, an illustration of the characters in wedding gown and another sexy one of them under the blanket. Basic character profile and staff commentary are provided.

The second section of the book covers the story. For each generation, there's a summary of the plot, an illustration of the map and a complementary illustration of the girls in onsen (yes, one of the most cliche themes in anime art). The Onsen illustration is accompanied by funny dialogue exchange between the characters, and every single one of them ends with Winfield shouting, "Nooooooooo! Help meeeeeeeeee!". The Onsen segment for Zero has more variety but also ends badly for the guys.

Other illustrations included are for the events, epilogue and credits. The illustrations here are more beautiful that the standing portraits from the profile pages. At least there are backgrounds and the characters are doing something. Some are mildly risque and some are too wholesome, like the ladies holding babies. There are also a couple of group illustrations as well as individual pin-ups.

The last few pages contain the database for the game, basically tables of Link Gauge changes, weapons, accessories, item conversion, equipment synthesis and downloadable content. Info that you can use for your game essentially.

It's a nice artbook that should appeal to the fans.