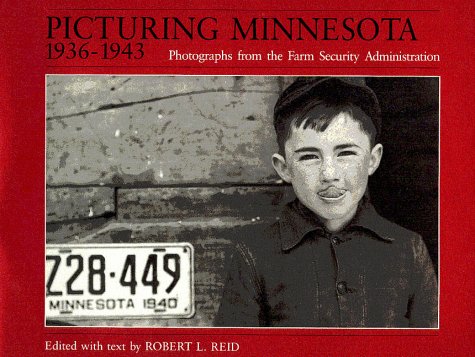 Robert Reid has edited four FSA State photo books: Indiana, 1987; Illinois, 1989; Texas, 1994 and this Minnesota one from 1989. What I liked about them all was the format. Each is divided into chapters with a short introduction followed by photos rather than a long essay then the photos which is the style in most other State books I have.

The eleven chapters cover such subjects as twin cities, lumberjacks, farming, transportation, leisure, Iron Ranges, World War II, workers in towns, cities and countryside. The 171 photos are by Paul Carter, Jack Delano, Russell Lee, Arthur Rothstein, John Vachon and Marion Post Wolcott from 1936 to 1943. Paul Carter is not generally included in FSA photo books. Of the forty-four photographers who worked for the FSA/OWI his work is the least of the big sixteen names who are now considered icons of American photography of the period.

The photos, as one would expect, are full of detail and they all work to reveal what hardships the people of Minnesota faced in these lean years, though the chapter called `Leisure time' has sixteen photos of folks relaxing. The last chapter `World War II' features several Jack Delano shots with a Swedish-American theme based in the Chisago Lakes area. Roy Stryker's assignment to Delano was to show what various ethnic groups were doing to support the war effort.

The book's landscape shape suit's the photos as they are mostly that format. The images are one to a page with generous margins and a caption below each. The paper is a reasonably matt art with a 200 screen printing.

This will probably be the only Minnesota book of FSA photos and if you live in the State and want a comprehensive record of life some decades ago this is the book to get.

Introduction to the Workers in towns and cities chapter.

Right: a rather timeless photo of snowplows from 1939, taken by John Vachon.