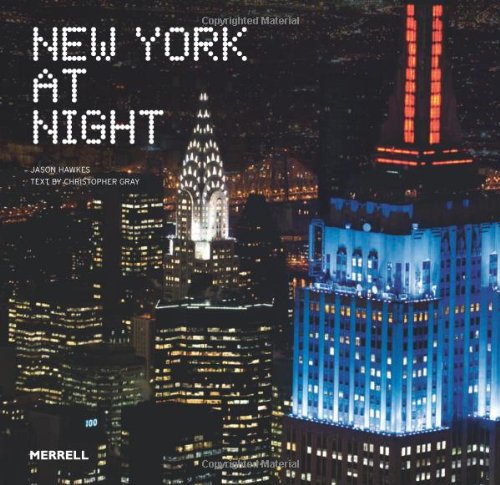 The world's premier city looks pretty cool in daylight so its look after dark should be dazzling. Photographer Jason Hawkes has done his best to capture the dazzle in these 130 images. It should have worked but I didn't think the idea quite comes off, partially because of the concept and also because of the book's presentation.

The bright lights of the city really only look dramatic where the skyscrapers are: midtown and the Wall Street area. The rest of Manhattan, after dark and from the air, sort of looks like any other huge metropolis stretching to the horizon. There are many photos in the book with not much to look at and taken from above doesn't help. Apart from the skyscraper area distance reduces what lights there are to small dots and the shapes of buildings disappear. The same shots during daylight, of course, look much more fascinating. Some of the aerial shots of skyscrapers do look quite stunning but the rest could just have as easily been taken from the top of buildings in midtown. This is what two other photographers have done with their photo books: New York Vertigo and Manhattan Lightscape. Both include some night shots among the panoramas of the city and nicely, both books are landscape shape rather than Hawkes square format (check out the Product Details).

I thought the book's presentation rather reduced it to a tourist offering rather than a creative photo book. Everything in the book is black, reasonable enough, it goes with the theme but unfortunately there a many spreads with two photos and a thin black strip which separates them, only it doesn't. Because darkness makes building shapes disappear two photos frequently look like they merge together and destroying the feel of both and all the photos bleed off the edge of the page. Another problem are the long captions. They are white text on black panels and annoyingly, quite often, these are placed on the photo.

If these photos had been presented in a more formal photo book style with more thought given to the text, still keeping the all black page design, I think it would made a more interesting book.

The near dusk photos work well.

Actually two photos with an annoying caption panel butted into the right-hand one.

Big caption block placed on the photo and another photo on the spread that makes it look confusing.