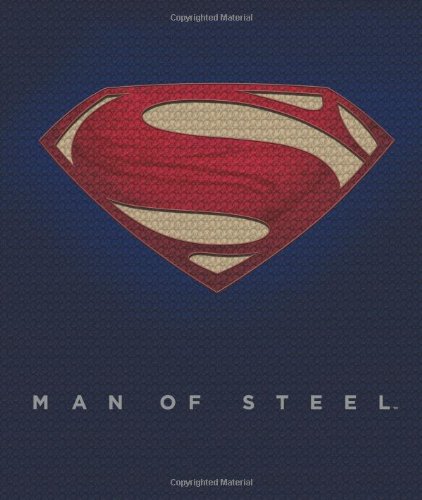 I wasn't very impressed by this Man of Steel art book. It's not bad but it's not that good either.

There aren't many character designs. Strangely, Zod's the only character with art featuring various designs. The rest of the characters, including Superman, are just shown with one or two illustrations or photos. The designs are the finalised ones. There's nothing on Superman's new suit besides the brief mention by director Zack Synder that underwear outside is no longer cool nowadays. The cover does have a nice embossed S with repeating patterns from the fabric of Superman's suit.

The concept art are generally nice but there aren't any mind blowing pieces in particular. There are some beautiful detailed pieces but also pretty rough ones. The overall tone is quite dark with a sense of grim throughout. There's a preference for the strong use of shadows, either to obscure detail or to suggest I'm not too sure, but I feel it's for the former because the detail I want to see usually fades into the shadow.

The art feels quite static. Environment art are meant to be static but I mean those scene paintings with characters. There are many pieces with characters just standing on location. Superman usually stands alone staring into space. Comics usually have their characters in dynamic poses. Not so here. And there aren't any storyboards. You won't get the idea that this is an action film from the art.

There aren't any set photography on the props and locations. Most of the photos included are film stills, mostly portraits, but they look great.

The commentary is quite insightful and focuses on the design and direction of the film. It talks mainly about the interpretation of the characters and stories for the audience that are so used to superhero movies nowadays. There's not much on the actual production shoot and stories behind the scenes.

Those who have watched the film would probably enjoy this book more but that would also depend on what you're expecting.

I recommend flipping through the book before you buy.

I was interested in getting this, but after your review, I'm ready to change my mind. Makes me wonder if this book is a case of "better than nothing". The new Star Trek movie is lacking an "Art of..." book, and I'd really love one of those. I saw the movie yesterday. It was good, but not great. I felt the same after "Batman Begins", and I wonder if the inevitable Man of Steel sequel (like Batman's) will be better...

I was actually planning to buy the book but after reading the review, i just want to save my money for a better art book. The movie was awesome despite minor flaws. In fact, it was so much better compared to another superhero movie earlier this year which has been nothing but fiasco & major disappointment. Man of Steel is so concise in the sense of its actions & plot. Sadly, the book doesn't seem to reflect that same conciseness. Thanks for your review! Otherwise, i'd end up wasting my money.

I am on the fence with this. I bought it, but not sure if I want to return it. I like it for what it is, but its anemic compared to the art books like Pacific Rim or Iron Man 3, for the same $30.