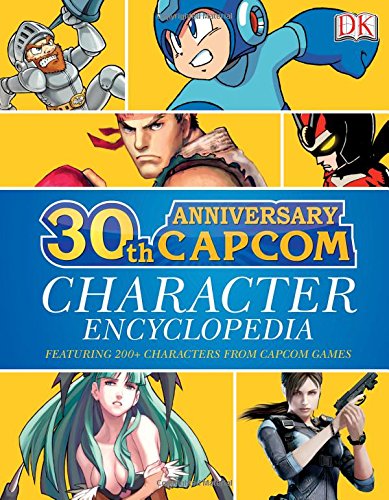 Capcom have created an incredible number of memorable video game characters over the years. Featured in the book are usual cast of characters from Street Fighter, Megaman, Darkstalkers, Resident Evil, Deadrising, and many more from other games I've not even heard of.

There are over 200 characters included, and each character is giving only a 1-page coverage. This book is a bit larger than A5 size and they can only squeeze in text that make up a quarter or third of the page, and you have a large character illustration, the video game logo, another illustration from the game, and a small data fact box.

I bought this book to wanting to read and find out more about these characters, but I was rather disappointed.

The character profile is too brief with the short write-up. Some of these characters have really rich and long history and yet you can only read so little about them. The fact box also just gives a handful of info like where they appear, their weapons, and personal attributes. Overall, it's interesting to read because these characters are interesting, but you'll be left wanting more.

It's supposed to be an encyclopedia so I was expecting more content for each character, something similar like the oversized Marvel Encyclopedia. This book feels like an slightly expanded index instead.

You know those food commercials where they show you a big burger, and when you actually buy it that burger is much smaller? Well, almost the same thing here. I say almost because I should have expected it for the relatively low price of the book. But it's a seriously missed opportunity. If I have a choice, I prefer an expanded version, double the size and number of pages, even if it's more expensive.