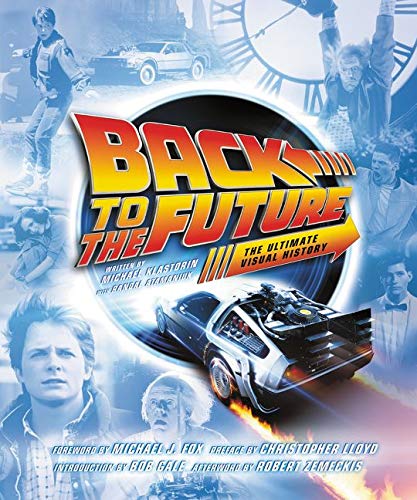 The idea of having this book was actually pitched several times by the author Michael Klastorin but was rejected until it finally got approved for a release this year. And they could not have found a better release date than the 21 Oct 2015, the day when Marty McFly traveled to the future.

This 224-page book is a wonderful companion to the three films in the series. It features the production stories, photographs, artworks and several removable items.

The production stories in particular are a delight to read. It actually more like a production diary because all the events that happened on set are recorded in chronological manner. You'll get to read about the early scripts, find out how they shot for six weeks only to recast the main guy as Michael J Fox, build the sets, handle the budget and come up with ideas for the past and wacky future, or get Drew Struzan to draw the posters. The premise of time travel is still so captivating and it's still so fun to read about how they actually produced the film. There is so much information in the book.

There are concept artworks for the car. You'll learn how they find, design and build the car, and also how they actually float the car, and of course the hoverboards. Other concept art are for the designs of the sets and locations and also the gadgets from the future. There are lots of beautiful behind the scenes photography too.

Removable items include this holographic photo where you tilt and McFly's family disappears from the photo. Brilliant. There's also the letter McFly wrote to Doc Brown that ask him not to open until 1985. A poster of Jaws 19 is attached at the back of the book.

This is a terrific book for the fans and those into pop culture.