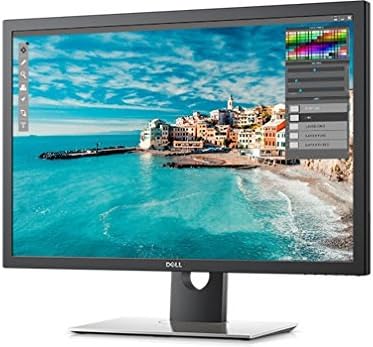 Here's a review of the Dell UP3017 monitor for creative professionals who work on graphic design, art, photo and video editing.

The monitor I have is a review unit that I borrowed from Dell Singapore. This is my fourth Dell monitor review. The earlier ones were for UP2716D, U2717D and S2817Q and U2711 (my current monitor).

Let's take a quick look at the specifications and I'll point out the important parts to graphic designers and digital artists.

What it comes with

Only three cables are provided: the USB 3, mini-DisplayPort to DisplayPort and the power cable.

These are the ports on the back. Note that there's no DVI port. DisplayPort and HDMI should be able to run the screen at full resolution 2560x1600 easily.

On the left side are two USB 3 ports. There's no more card reader.

Physical menu buttons are at the bottom. When powered on, there's a small white indicator light at the bottom right where the power button is.

If you want to VESA mount this, the distance between the screws are 4 inches apart.

This Dell UltraSharp monitor has specifications that should delight most creatives.

My current monitor is the still-surviving but half-dead U2711 that I bought in 2010. When compared to a 30-inch like this, I can't say I miss the smaller 27-inch screen.

This monitor features a 16:10 aspect ratio screen with 2560x1600 resolution. This aspect ratio is not common as monitors in the market are mostly 16:9. With the 16:10 aspect ratio, you have more vertical working space. There are 11% more pixels compared to the 2560x1440 resolution of typical 16:9 monitors. Overall, it feels quite immersive when looking at such a huge screen. And it's a pleasure to work on such a screen size and resolution.

In the photo above, the gray bar at the bottom represents the extra 160 vertical pixels across.

At the size and resolution, the PPI is 100 vs my 27-inch monitor's PPI of 108. This means the size of user interface of graphics software, and operating system, remain quite similar in size. Menus and buttons from Photoshop are large and can be seen easily without need for squinting eyes. By comparison, the next larger monitor Dell UP3216Q with 4K resolution has a PPI of 139 which is still not bad. The most recent monitor I reviewed, the Dell S2817Q has a PPI of 157 which is starting to make user interface look small. I guess it's still usable. I won't get any 4K monitor under 30-inches.

The UP3017 supports up to 99% AdobeRGB. That's great for print designers because that gamut covers the whole CMYK gamut. For photographers and video creators, it means you also get a wider gamut to work with, before you export to other colour space.

I've used a Spyder5PRO colour calibrator and got a read out for 97% Adobe RGB so that's quite close to what Dell claims.

The advantage of AdobeRGB vs sRGB is the former has a larger colour gamut that includes all the colours from sRGB and more. Now, which monitor you choose will depend on where your work is going to appear. If your work is mostly going to appear on the web, such as designing for web or you're just hosting photos online, sRGB monitors are more than sufficient. For my purposes, I work with print so I want a monitor where I can see all the colours from the CMYK gamut. The CMYK gamut is within AdobeRGB but part of it is outside of sRGB. With a monitor like this, I can match what I see on screen with the actual printout which is very useful when checking proofs.

When you have a larger colour gamut, you can work downwards to a smaller one, but you can't do the reverse if you start out with a smaller gamut.

Ultimately, it depends on the type of work you do. Where are people going to see your work mostly?

Unfortunately for me, the unit that Dell sent me has problems with colour cast. On the right, there's a slight cyan cast. On the left there's a slight magenta cast. This can only be seen when working against white backgrounds, or surfing the web for example. It's very subtle and almost unnoticeable unless you're looking for it.

Can you see the colour cast from this photo above?

Now here's how the monitor look when I increased the saturation to make the colours more prominent. I had enhance the photo significantly because the colour cast is really subtle.

When I gave favorable reviews for other Dell monitors I've reviewed, there were comments saying that Dell cherry-picked a flawless unit for me. Well, it does not seem to be the case here. Anyway, if I were to get a monitor in this condition, I would return it for an exchange because this is a pricey monitor that Dell say is for "color-critical performance". Let's hope that it's my unit that has this issue.

There's IPS glow for an IPS panel. It's not surprising. But it's only obvious when viewing the screen in total darkness.

Other than the colour cast, backlight is quite even but corners are slightly brighter.

Here's how it looks like when watching a movie. The areas where the black bars are are not totally black, again not unexpected for IPS panels.

With the 16:10 aspect ratio, wide aspect movies will have thicker horizontal black bars at the top and bottom. Those 16:9 videos from digital cameras and phones will have thinner bars.

I definitely feel less to no heat emanating from the monitor when seated one arm's length away. The typical power consumption is 54W compared to my current monitor's 113W (that's hot!). Newer 27-inch monitors nowadays uses around 30-50W. The Dell UP2716D uses 45W.

The monitor can detect graphic input automatically. This is a helpful feature for me as I often have to switch between HDMI and DisplayPort. It saves me the hassle of going into the menu to change any settings.

The Dell monitors that support up to 99% Adobe RGB are the UP2515D, UP2716D, Dell UP3017 and UP3216Q. These would be the monitors I would consider buying for professional print design work.

The pricing for Dell UP3017 can vary a lot depending on where you buy it from.

Here in Singapore, UP3017 is SGD $2099 and UP3216Q is SGD $2259. The price difference is not significant so to me it's a no brainer to get the UP3216Q instead which has significantly more resolution. However, the UP2716D is only SGD $1099. I can't understand the SGD $1000 difference from the UP2716D. And unfortunately, the pricing of Dell monitors here in Singapore are also much higher than that in USA. Even Malaysia is selling cheaper than Singapore.

I hope the colour cast issue only affects the monitor that I have and not others. Other than that issue, this is a good monitor and I really enjoyed using it for more than a month.

Would I buy it personally?

Looking at the price difference, I prefer the smaller Dell UP2716D which has less pixels but not significantly less, but is significantly cheaper. Or if the price of the Dell UP3216Q is close, I would choose the 4K monitor for more resolution.