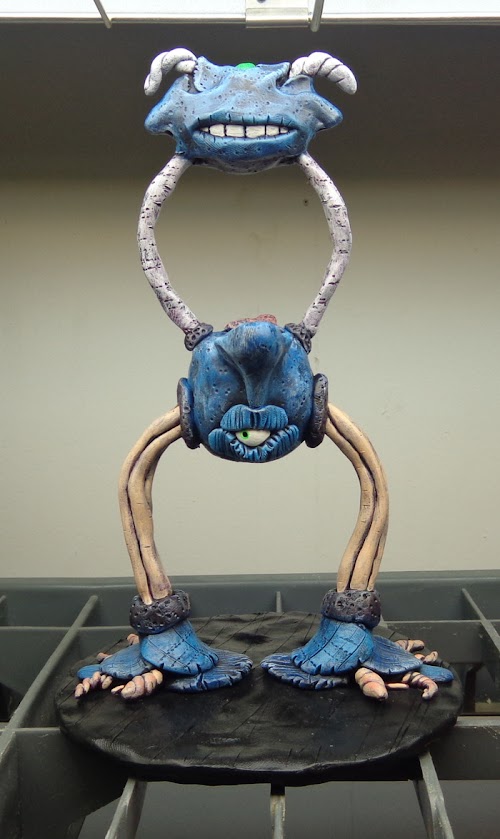 Robert Mellayne has been creating sculptures on and off throughout his life. Now, he has created a Kickstarter campaign called Shoggoth Shetani to share with his audience his creations. He talks more about his inspiration and campaign in the following interview.

Qn: Can you give us an introduction about yourself?

I am sort of Robert Mellayne, in that it is a pseudonym. I was born and raised in the Acadiana (Cajun) area of Louisiana. I’m 36 and live in New Hampshire now with my wife and daughter. My daughter is much more autistic than I am – that statement and how it was worded is profound regarding my situation but won’t be understood by most.

I am not an artist by profession and I don’t draw or paint or anything. I have never taken any art classes, but I like primitive/outsider art so I haven’t really felt the need to seek out advanced technical knowledge.

My first steps into this area of art were modifying my GI Joe figures as a kid, switching parts or using a knife and/or lighter to inflict injuries on the figures.

I became interested in gaming miniatures (Dungeons and Dragons, Warhammer 40K) at 9 or 10 and painted/modified my figs. This is where I picked up a technique I use on my current project, called drybrushing. I’ll get into that later.

Getting older, I moved on to other interests but came back to toy mods in the early 2000s when I briefly got into a game called Mage Knight, and then started modding a couple Masters of the Universe figures before I found Stikfas DIY action figure kits and designer vinyl toys. I really enjoyed making my own characters and that sort of was a segue into art dolls, which I abruptly quit working on about 3-4 years ago.

I had to deal with some mental/emotional things and reexamine my life. My daughter’s autism diagnosis, reviewing my own level of autism, taking an extended leave from working, reentering the work force in a different field (community support for the disabled). Things were weird and difficult and confusing in many areas. I became focused on the kid, work, gym and video games.

Recently (like within the past 2 months), I decided to get my feet wet with art again after years of downtime. Where in the past I kept focusing on a toy/figure/doll angle, this time I decided to explore other ideas that had been stewing in my head during my hiatus. My grandmother had sent me some art that I wanted from her collection that I had thought about on and off for years. Social media meant a greater opportunity to reach what is really a niche market, and my favorite subject matter (Lovecraftian) is on an upswing. Plus, my daughter is at a stage where she can respect what I’m doing and let me work.

I’m kind of a hack, really. I try to overshadow my lack of technical skill with my excessive creativity. (Don’t tell anybody.) 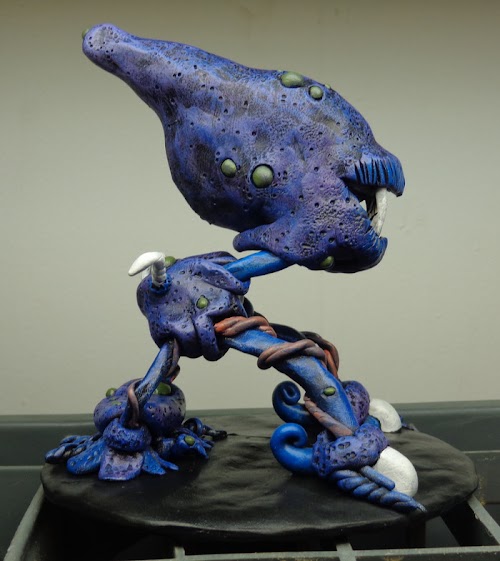 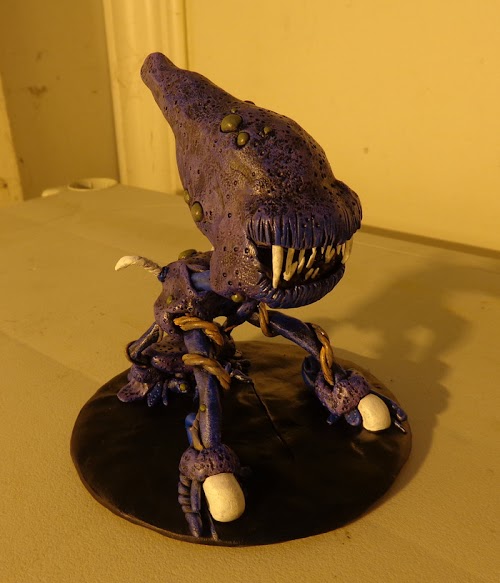 Qn: Tell us more about your Kickstarter project Shoggoth Shetani.

A shoggoth is a creature created by the author H.P. Lovecraft that is a part of the “Cthulhu Mythos”. It is a sentient mass of biological material that can alter its form. They were created by an ancient race for slave labor, and seem to have an issue controlling their ability without a master’s instruction. They are described as constantly shifting with eyes, mouths, and bio-luminescent globes appearing and disappearing as they attempt to mimic their dead masters.

Shetani is a style of carving from the Makonde tribe in Eastern Africa. My grandmother had several sculptures in this style that I remember from childhood but never knew what they were. When she sent them recently, she had looked up that they were Makonde, and I later found that they were Shetani.

Shetani means "little devil" and is an Africanization of Shaitan from Arabic/Muslim influence. They are depictions of spirits that manifest in physical form but do so poorly with misshapen, mis-sized, or missing parts and asymmetrical qualities. The style is mid-20th construct than based on any specific legend.

So I thought I would marry the concepts. Shoggoth Shetani use the concept of something making an attempt to mimic life forms as we know them, but depicted in an abstract/surrealist neo-primitive art piece. The pics of the sculpts on the Kickstarter are a bit more forward-facing as a whole than I foresee the future body of the work.

The Kickstarter is for "Series I" of Shoggoth Shetani in a blind-box format. Collector vinyl toys are produced in limited runs and often sold as "blind-box" items. That means you know you’re going to get a "widget" in the box, but you don’t know if you’re going to get the blue widget, green widget, or black widget. There may be a lot of blues, but the black is hard to get. So when you pledge for Shoggoth Shetani you don’t know which sculpture you’re going to get. You can pick the basic color, and the quantity is based on a "rarity" scale. I think it adds a layer of fun to the whole thing.

The goal with the Kickstarter is to make a fun experience and get a few coins to upgrade that experience. I really need professional photography (which I am doing with this series regardless) because my pics don’t show enough fine detail. I’d like to maybe get a 2d artist and/or a writer to expand the concept/brand. I don’t need to get paid to do this, but it would be nice not to have to pay to do it. 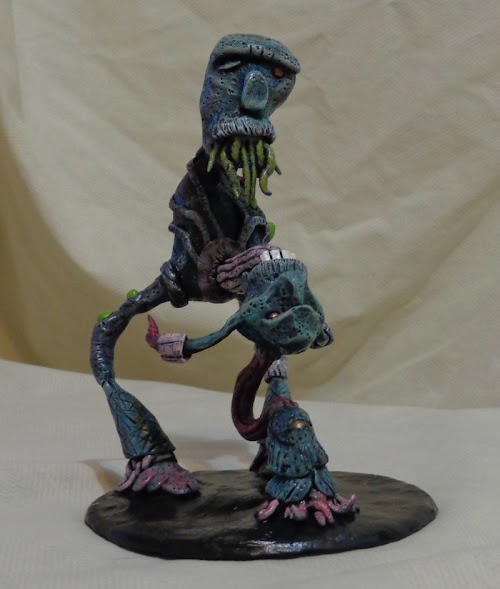 Qn: Your sculptures look really cool. What or who are inspiration sources?

I mentioned my grandmother’s sculpts and Lovecraft above. I really like primitive art – voodoo dolls, the moai of Easter Island, pagan earth-mother idols, etc. Any kind of tribal mask is great. I really like puppets and muppets, which kind of fall into the primitive art category. The Dark Crystal is one of my favorite films and I really enjoy Brian Froud and all things faerie. For the Lovecraftian/horror stuff I like The Thing (Carpenter’s), Pumpkinhead, and old-school rubber monsters. 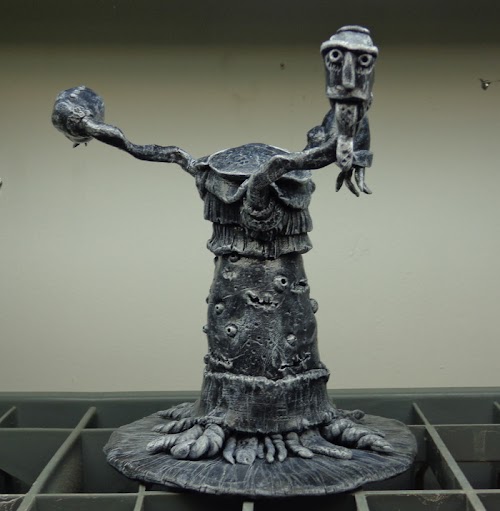 Qn: Tell us more about your sculptures.

They are polymer clay and epoxy over a wire and foil armature. The base is a CD or DVD that is given "anchors" made of epoxy (made to patch water pipes) that is covered with polymer clay. The epoxy dries very hard but had limited working time so that is used for anything protruding. Everything is done in layers and somewhat random. I start working and eventually a general idea or concept will arise, but that could change multiple times before the piece is done.

I mostly use my hands. I did recently buy an extruder since I have so many tentacles to do, and I have some basic sculpting tools but I only really use a couple of them. Mostly I use my tools for texturing, and sometimes a stiff paint brush works. My paint brushes are cheap, and I usually buy them from the kid’s art section.

The painting done with a technique called drybrushing. The piece is painted with a solid black base coat to begin with. Then I will layer colors by applying paint to a brush and then brushing my hand/arm to remove and dry out most of the paint. Then I sweep back and forth over the piece with varying pressure to catch the texture of the piece. Repeat until done then add detailing. It comes away with a very organic look, in my opinion. My pictures don’t really show the detail as well as I would like. Also, I was using a brush on sealer in the beginning that dulled some of the detail until I asked around and found Mr. Super Clear spray-on. 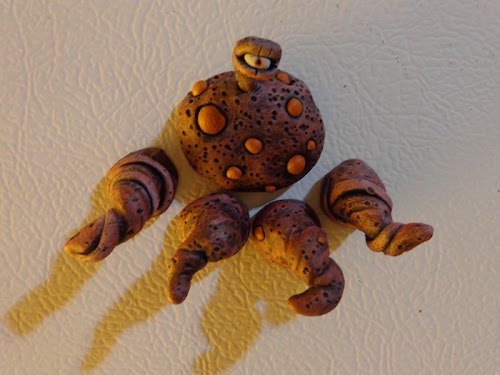 Qn: What are the challenges of making such sculptures?

The big challenge is selling them. It’s really a niche market and hard to convince someone to purchase something sight unseen.

But as far as technical challenges? I really have to be careful to avoid breaks or paint loss. If I break a couple of tentacles on a foot, it’s hard to get under the overlapping flesh covering. If I drop a piece and paint comes off, matching the exact layering could be hard especially if I mixed my own colors several days ago. For this series, all pieces in the same paint scheme will be done at the same time. Since this is a fairly new project, I’m sure there will be unforeseen challenges that arise in the future. 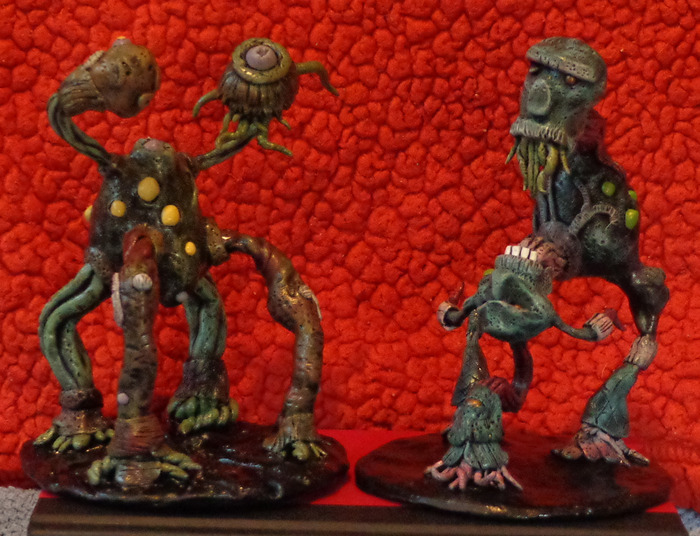 Check out more details of Shoggoth Shetani at https://kck.st/1sAg63p