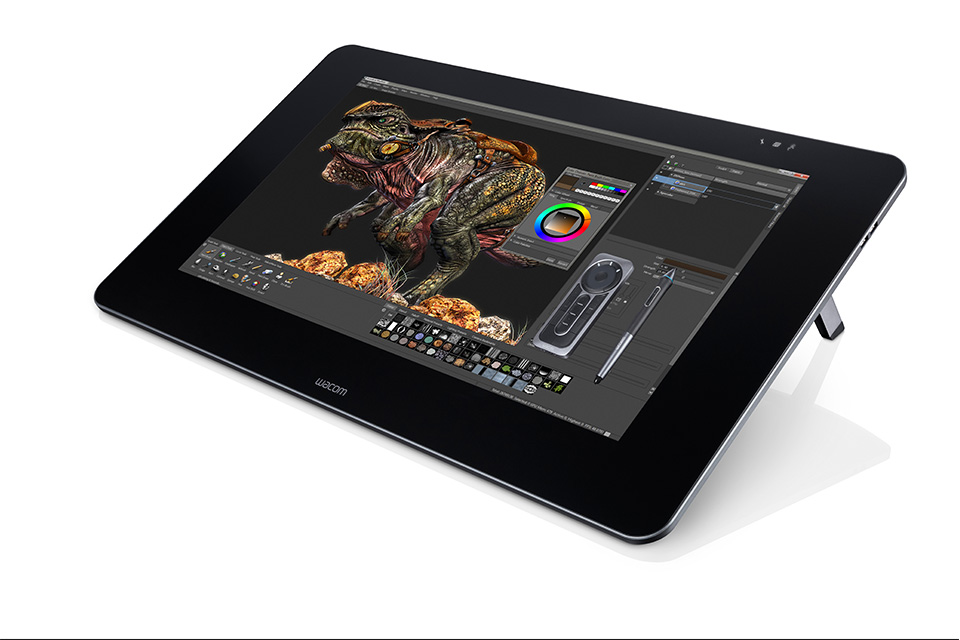 Wacom has just announced their largest Cintiq, the Cintiq 27QHD (Wacom.com). Wacom has improved the physical design and specifications to make it better than what they have been offering. 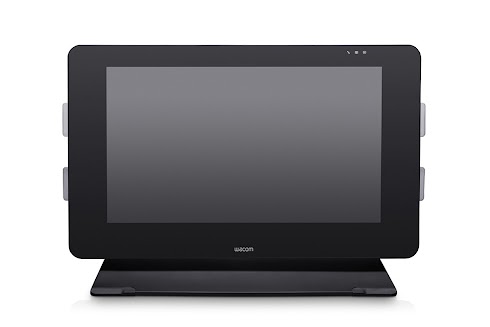 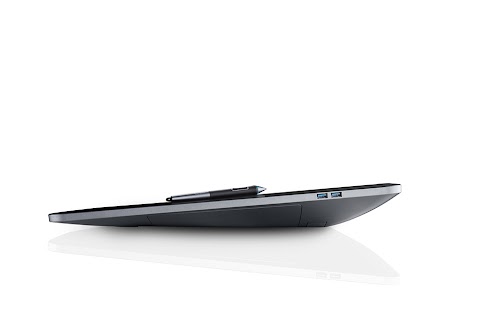 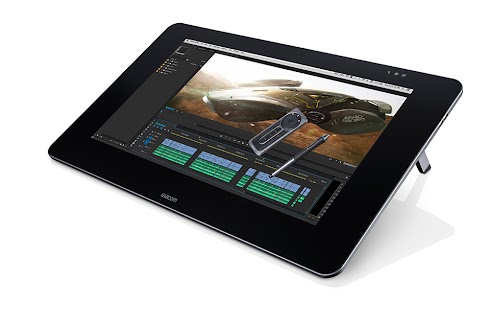 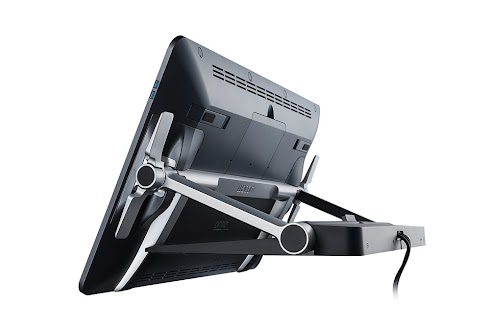 The Ergo stand is now sold separately and cost USD $399. It was previously permanently attached to the Cintiq 24HD adding to the big bulk. So now you have the choice to do without it which is nice. The Ergo stand allows the display to be pivoted over and to the front of the table's edge.

Without the stand, you'll just have the option to either lay the Cintiq flat on the table (5 degrees), or extend the two short legs behind the display to prop it up to 20 degrees angle.

You can also choose to wall mount the whole thing with a third party VESA arm.

The display weighs 9kg alone. With the stand is included, it's 25.1kg total. 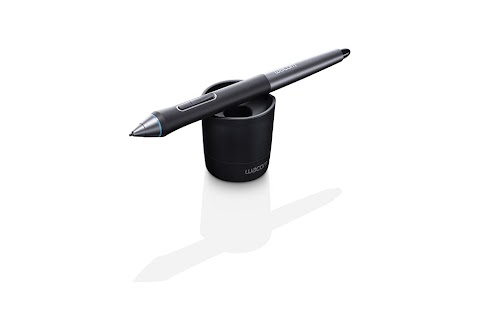 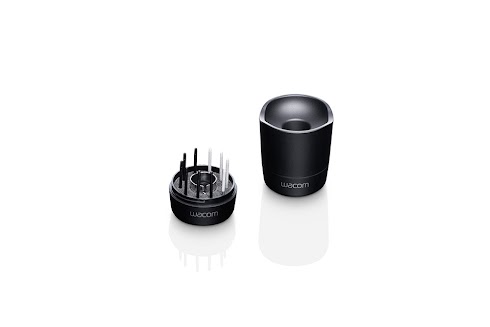 The Cintiq 27QHD supports up to 2048 levels of pressure sensitivity and 40 degrees of tilt range.

A selection of 10 interchangeable nibs are provided. 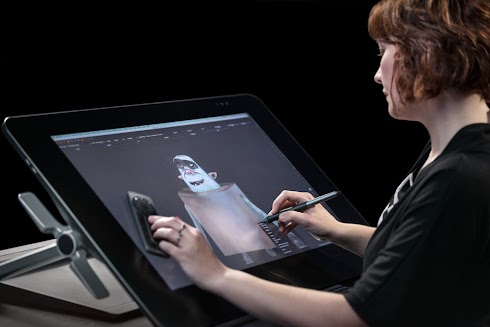 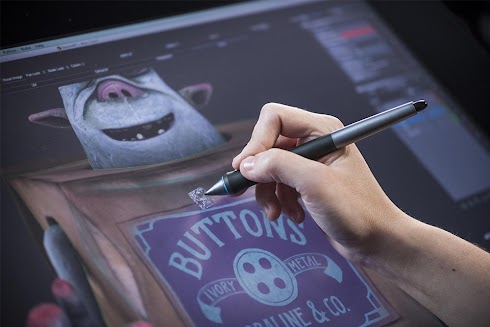 The screen has improved in quality tremendously.

QHD has 77% more pixels than HD. That's 2560 by 1440 in resolution vs 1920 by 1080. You can now place two A4 files side by side and still able to see icons on your desktop. That's plenty of working space for your actual graphics, menu, palettes and other controls. I've been using a 2560x1440 Dell display for years and it really improves productivity.

The display uses AHVA LCD, a Wacom propietary IPS panel, which can display 1.07 billions colours, including 97% of Adobe RGB color gamut. But you need DisplayPort and video card supporting 10 bit colour to take advantage of the graphics capability.

Viewing angle is 178 degrees horizontally and vertically. Contrast is 970:1. Brightness is 330 cd/m2. Response rate is 12ms.

In order to reach the maximum resolution of 2560 by 1440, you need to use a DisplayPort. The other graphic port provided is HDMI.

Five USB 3 ports come with the display. There are two on the left and right sides.

The glass surface is treated to mimic the texture of paper. 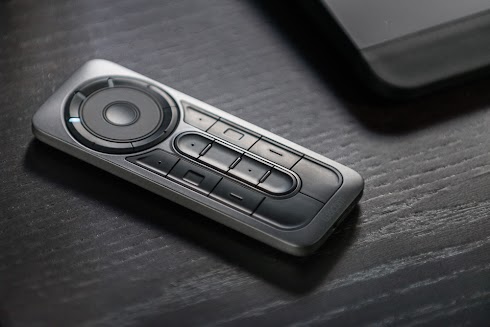 The Expresskeys have now moved to a separate remote. There are 17 shortcut buttons including the touch ring. Left and right handed users can no longer complain about the placement of the Expresskeys because you can now place the remote anywhere you like, on the table or even on the screen itself.

The touch ring will allow you to easily easily scroll, zoom, rotate and change brush sizes. 17 customizable buttons is a lot!

This is something I've said in the other post about pen display tablets.

Is it worth an extra USD $500 for the touch functionality? That's your call.

For those using Photoshop CS6 and older, you'll have to upgrade to CC in other to enjoy touch functionality and must factor in the extra cost.

Here are the promotional videos Wacom has put out with the help of Laika artists.

The videos talk about the surface size, pen performance, colour performance and versatility of the 27QHD.

Will you be buying one?

You can check out Amazon for the availability and reviews. Below are direct links to the 27QHD.

This is a very nice tablet, and the price is actually very good compared to the say, the 22HD or the 24HD. That said, in 3 years when they release the 27" 4K model, we might feel a little hard done by in having to buy yet another cintiq again, again, again....

They're always a little behind the curve with display technology. QHD resolution has been out for years - is it really a worthwhile investment? Wouldn't we want a RETINA Cintiq and finally get rid of pixels once and for all?

@Ryan Branson
Don't get too caught up with QHD vs 4K.

I use a QHD display and I've found it quite difficult to see the pixels even at arms length.

4K, which is extremely expensive currently, is more suitable for video editors working on 4K video.

Also note that you need a decent graphics card to power 4K resolution.