Hi folks, Jose Cua here and this is a review for another tablet monitor, the Ugee 1910B. Ugee has been in the tablet game since 2003 and have a wide range of tablets under their belt. Their products have received generally good reviews from artist around the globe and I have been fortunate enough to review one of their monitor tablets, the 1910b. 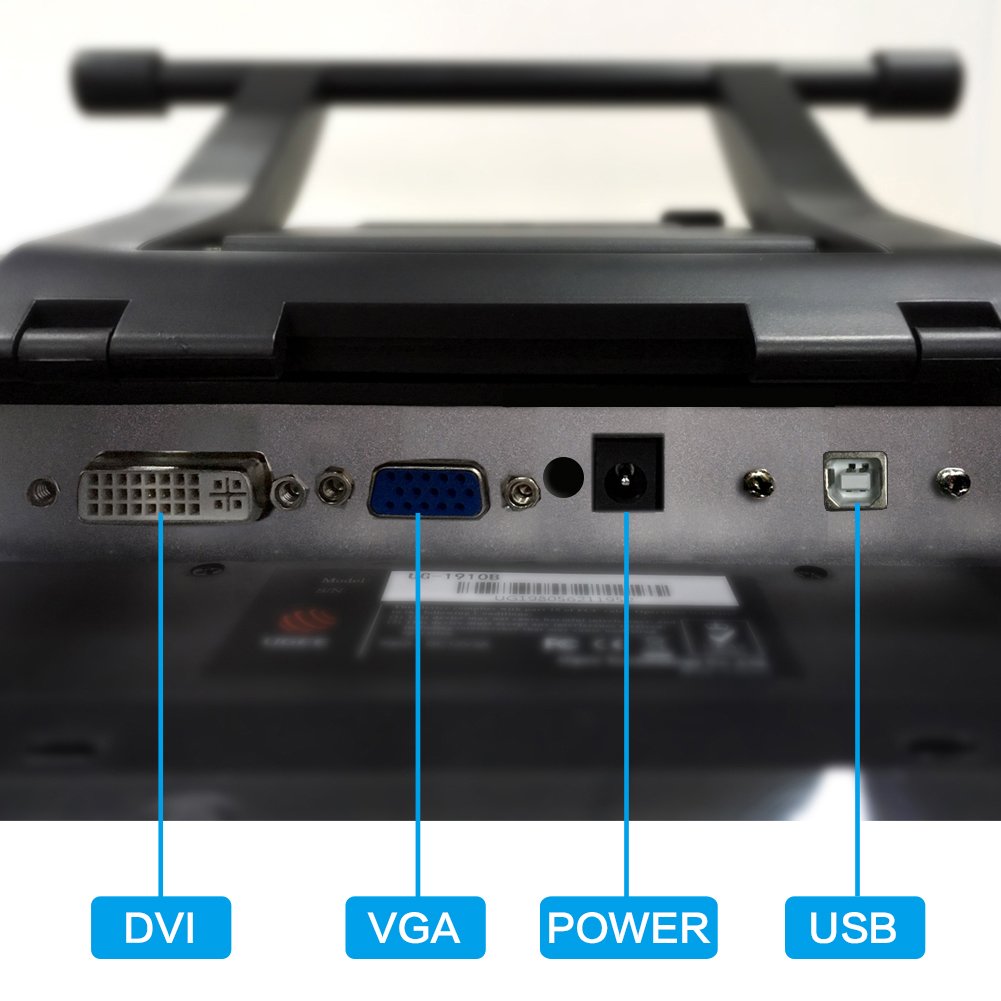 Unlike other competing models out there, HDMI is not available so it connects only through a VGA or DVI cable. If you are using other slots on your PC or Laptop you will have to buy an adapter which should be easily available on any electronics store. It’s very similar to the XP-Pen 16 and the XP-Pen 22HD in terms of accessories. It comes with similar cable accessories and 2 chargeable pens. I had a hunch that it was probably the same technology under the hood and found out that the pens on the Ugee work with the Xp-Pen and vice versa. The stands that come with the Ugee and Xp-Pen are also pretty much identical.

The stand locks firmly in any angle and while I feel this is superior to something you would find on a Cintiq 13hd or a Cintiq Companion, my preferred setup is still using a monitor arm.

Thankfully the stand is detachable and the monitor is VESA compatible so setting it up with my Ergotron was just as straightforward as my Cintiq or XP-Pen.

I was also never a fan of the glassy feel of the tablets so I had a matte screen protector attached on it as I have with all my other devices. It will set you back around 30USD but its a preference of mine and I feel the price is worth the end result. With it, it is much smoother to glide my hand around the screen while drawing.

Setting up the tablet was pretty straight forward, when installing the drivers, it automatically detects existing tablet drivers and uninstalls them for you.

How does the tablet perform?

The 1910b’s display is only 1440 x 900 compared most of the competitions 1920 x 1080 or even (4K for the Cintiq Pro 16). This is the tablet monitors main disadvantage. Text can seem pixelated or blurry when browsing, but when painting or sculpting its something that I eventually ignored. Cursor parallax is present but it wasn't as drastic compared to the XP-Pen when shifting the cursor towards corners. There was no need for me to the run calibration which was a pleasant surprise.

While the resolution was a bit of a letdown, I was pleasantly surprised by how the pen performed! It felt very comparable to Cintiq I was using at work. The Ugee 1910b’s pen worked flawlessly! The lightest touch registered, and I felt I didn’t need to press too hard to get my middle and high pressure ranges (Compared to the XP-Pen monitors I had tested, with which I had to resort to adjusting the pressure curves using a third party app). Despite the lower resolution the tablet felt great when drawing or sculpting, and I was very satisfied with the overall experience. 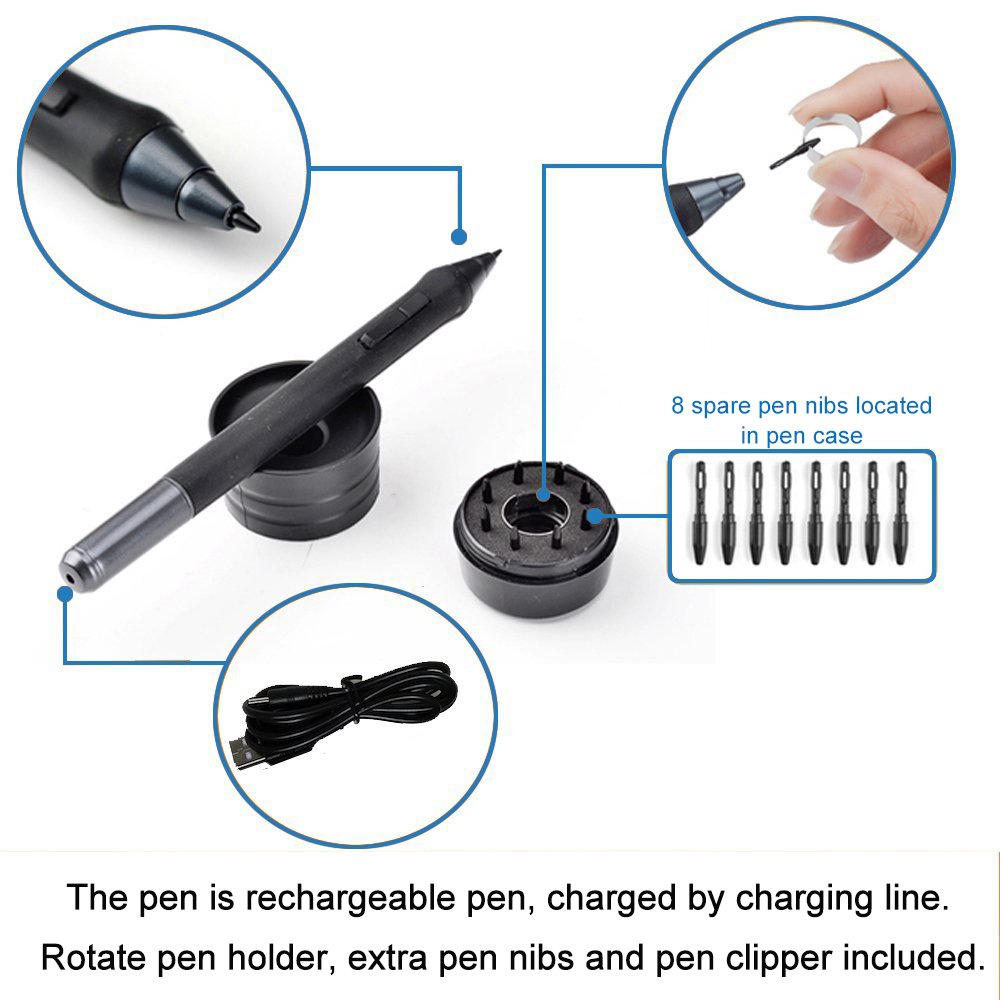 Here are some line tests in photoshop. There was some very minor shakiness but that was also present in my Cintiq 24hd.

And heres a quick test in Zbrush. The tablet works with no issues in the program.

Being a long time Wacom user I would say they make great products, but there are many things to gripe about. The prices are very high compared to the competition out there, and the customer service has been known to be far from pleasurable. It's no doubt that they are still the leader of the pack in terms of quality and specs, but having competing products out there levels the playing field for those who don’t wish to pay an exorbitant price for a tablet monitor. And having already tried 3 tablet monitor brands, I feel that things are looking good for us artists looking for alternative. We can now have a comparable experience for half or in some cases even a third of the cost.

Overall I’d say the Ugee 1910B is a really good product! It delivers great performance at a fraction of a price for what you would usually pay for a high end Wacom device. And while it does come with some minor flaws, I feel the positive traits outweigh the negative ones. It performs comparably with the other Cintiq alternatives out there, and the pen’s initial activation and pressure curve is the best compared to the other alternatives I have tried so far. When looking for a tablet monitor, its important for me that the pen should feel almost exactly like what I am used to with a Cintiq 24hd and the Ugee 1910B passes with flying colors in that aspect. For those on a budget I highly recommend this product, the price has been slashed from 699.99USD to 409.99USD making it an absolute steal!

There are no huge issues that deter me from using it. My drawing speed actually got a little faster from being more precise. You will need enough table space for it, as I can't see myself using it without space for keyboard and a 2nd monitor.

Pros:
1. Pen pressure feels responsive and has a good level of pressure.
2. Screen doesn't get hot. (Usage in an air conditioned room)
3. 19" Screen size is very comfortable to draw on.

Cons:
1. Screen is not full HD. Personally I can overlook it because the benefit of drawing where you see outweighs this.
2. Colour isn't accurate. But I check the colours using a secondary monitor.
3. Screen glare and surface glossiness. Overcome by using a matte screen protector.

Hi! Love these reviews, they're right up my alley. Can I ask you to please include a link to where we can buy large-sized matte screen protectors like the one you mentioned in the review?

I'll check the blog to see if there's an article on this, specifically, but it would be great if you could link directly to a vendor.