First off, thanks to local Singapore distributor One Thirty Five for lending me the Bosto Kingtee 22HDX for review. The Huion GT-220 I reviewed months ago was also a loan set from them. You can order this in Singapore from Basheer Graphic Books as I see that there are pasted posters in their shop, or contact Bosto Singapore at bosto-singapore.com or www.facebook.com/BostoSingapore

I've heard good things about the Bosto 22HDX and even used it a display set for a short period. It's exciting to finally have one unit to test out more comprehensively.

Unlike my Huion GT-220 review, this review will cover using the Bosto 22HDX on both Mac and Windows.

Before using the Bosto 22HDX, you should uninstall all Wacom drivers and install the lastest Bosto drivers from the Bosto website. There will be driver conflicts if you have multiple tablet drivers.

The Bosto Kingtee 22HDX is a pen display tablet. It's a monitor that you draw on, just like the Wacom Cintiq.

The key features to know about the 22HDX is that it has 1920 by 1080 resolution IPS LED panel (72% Adobe RGB gamut) with fantastic viewing angle, 2048 levels of pressure sensitivity and the pen does not require batteries. For the full specifications, just visit Bosto's website. 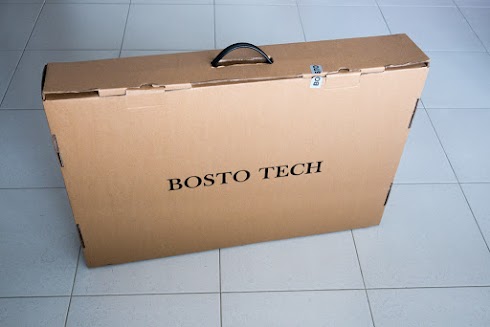 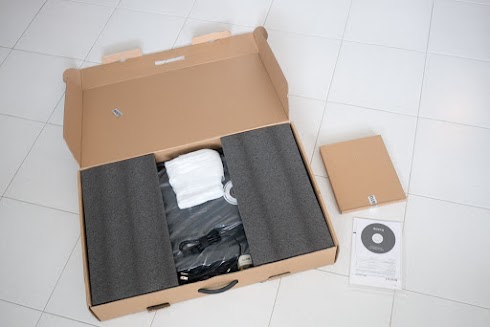 Here's the packaging that houses the pen display tablet. It's just a brown cardboard box with packaging art. I guess they don't need packaging box art since they are mainly selling the units online. 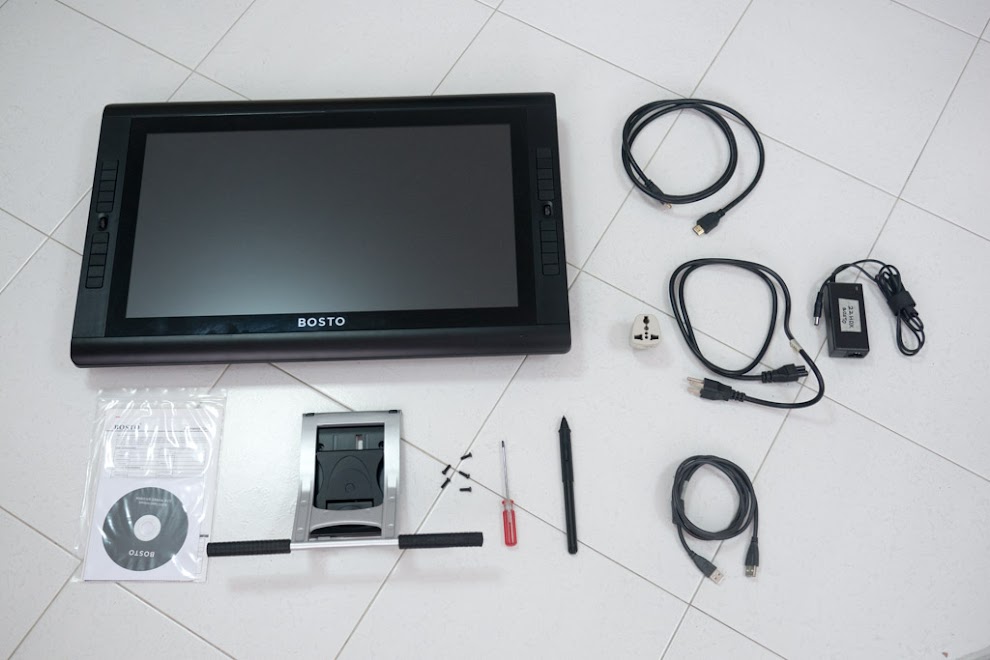 According to Bosto's website, it should come with a HDMI, HDMI-DVI and VGA cable, power cable and adapter, USB cable, screw driver with at least four screws, pen, the detached stand, the installation disc and the nib clip and 4 space nibs.

Mine's a review set so I've some items missing, like the nib clip and 4 spare nibs, and I only have the HDMI cable. 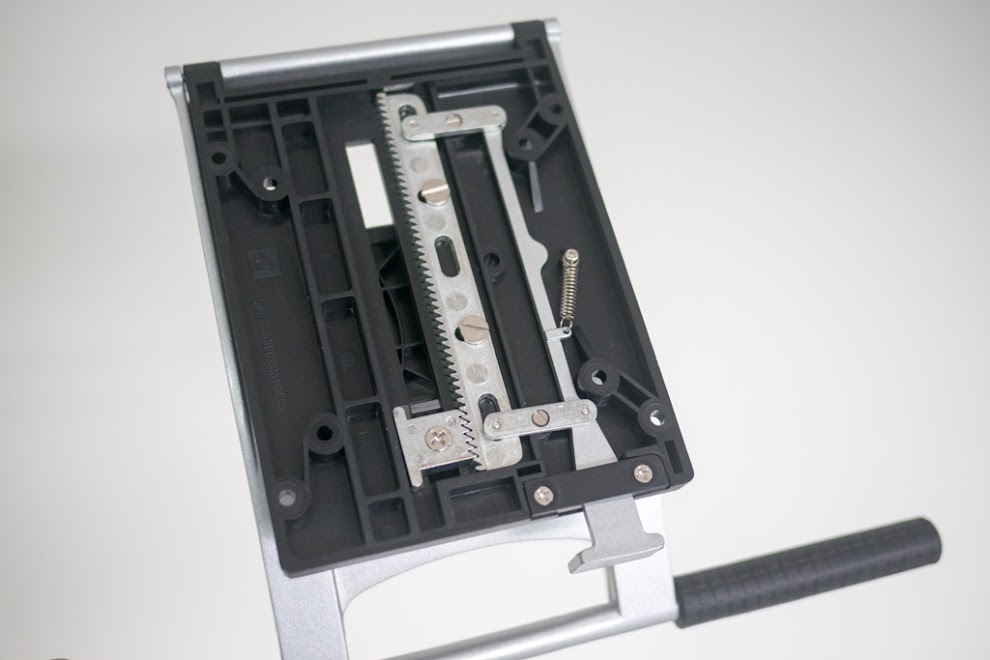 I'm quite surprised that the stand came detached. So you have to fixed it to the monitor yourself but it's easy to do so. The horizontal bar and the release latch should be at the top. Optionally, you can choose to mount the monitor to a vesa mount or LX desk mount. 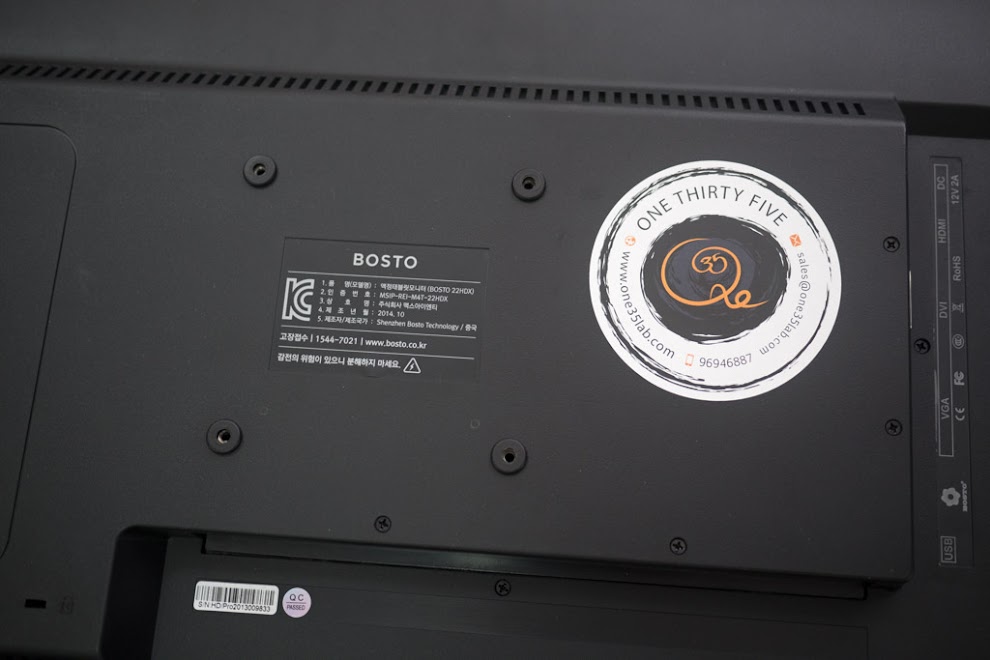 That's the sticky of the local distributor. The warranty provided is one year. 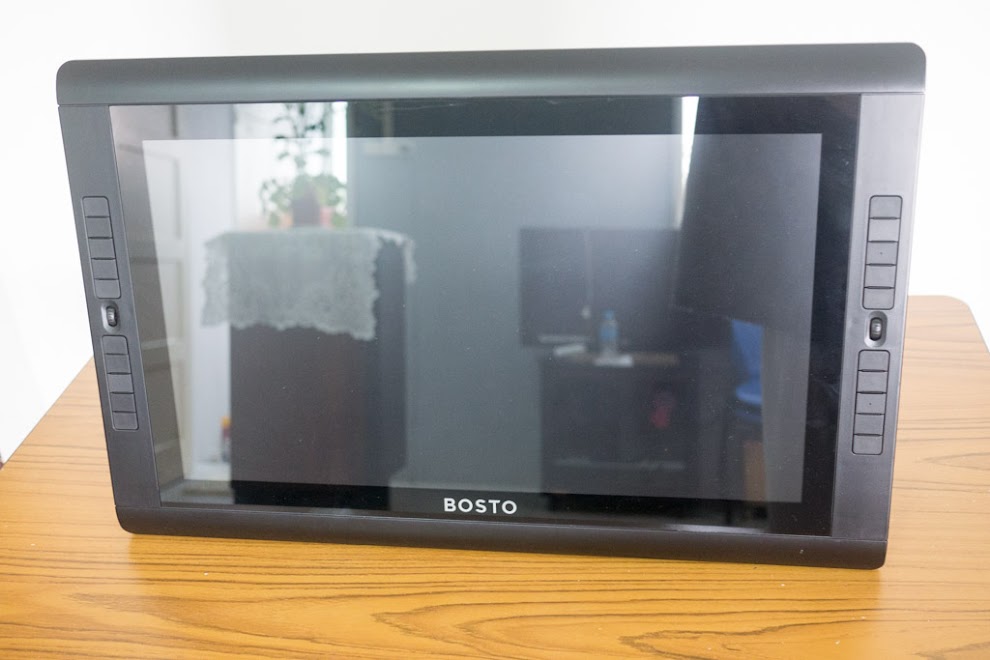 Build quality is quite good overall. The black plastic body is matte with smooth surface. From the front, you can see the 20 shortcut buttons and two dial wheels. The buttons are a bit mushy but works.

The drawing screen is the glossy type. It will take a while to get used to drawing on it. If you have lights above and behind you, the reflections can be distracting.

Bottom part of the unit becomes warm with usage but it's not a big issue or unbearable. The upper portion of the monitor is cool. 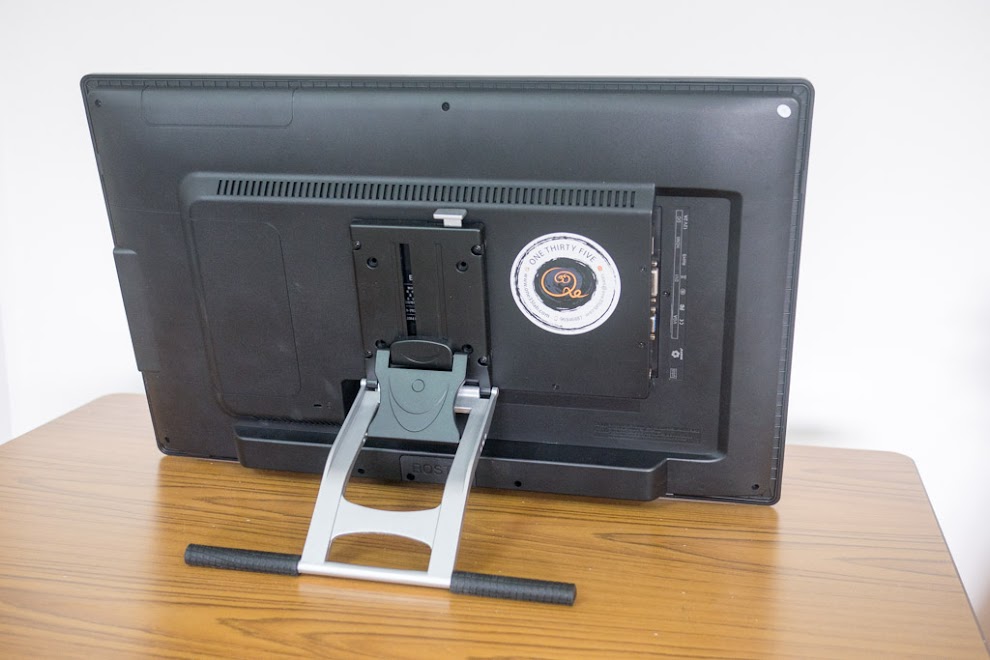 The latch and horizontal bar are at the top after you fix on the stand. When you pull and release the latch, the horizontal bar moves downwards to support the unit. 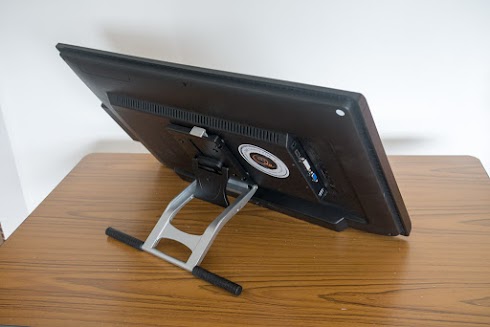 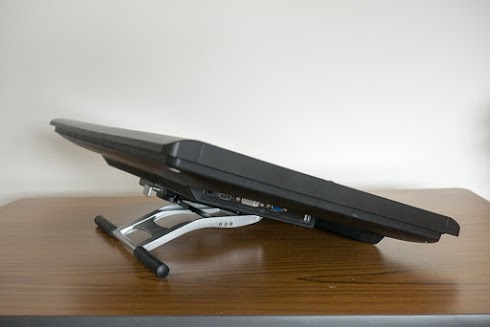 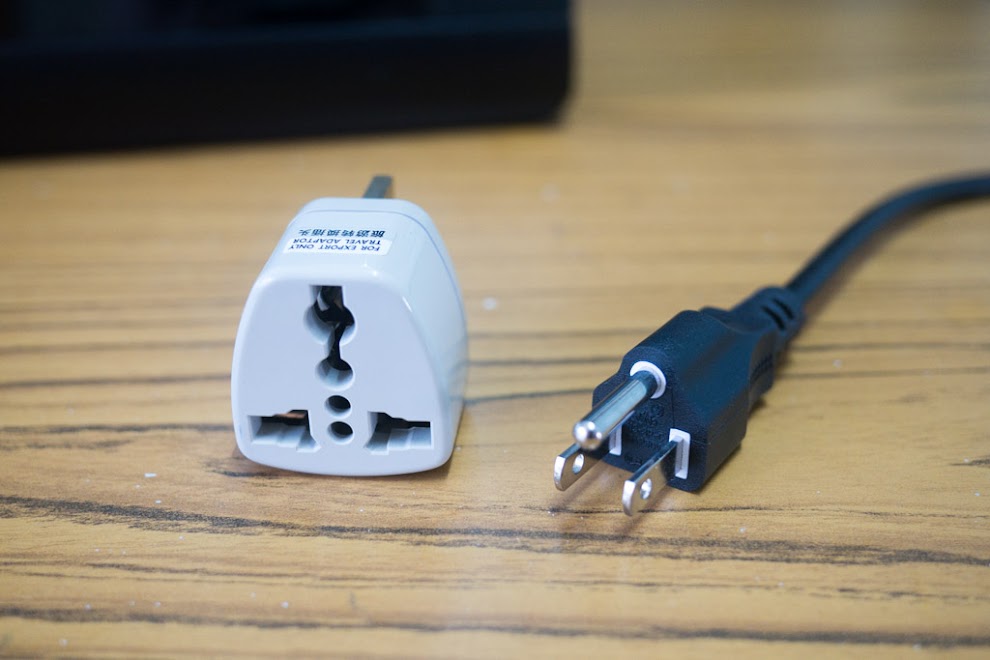 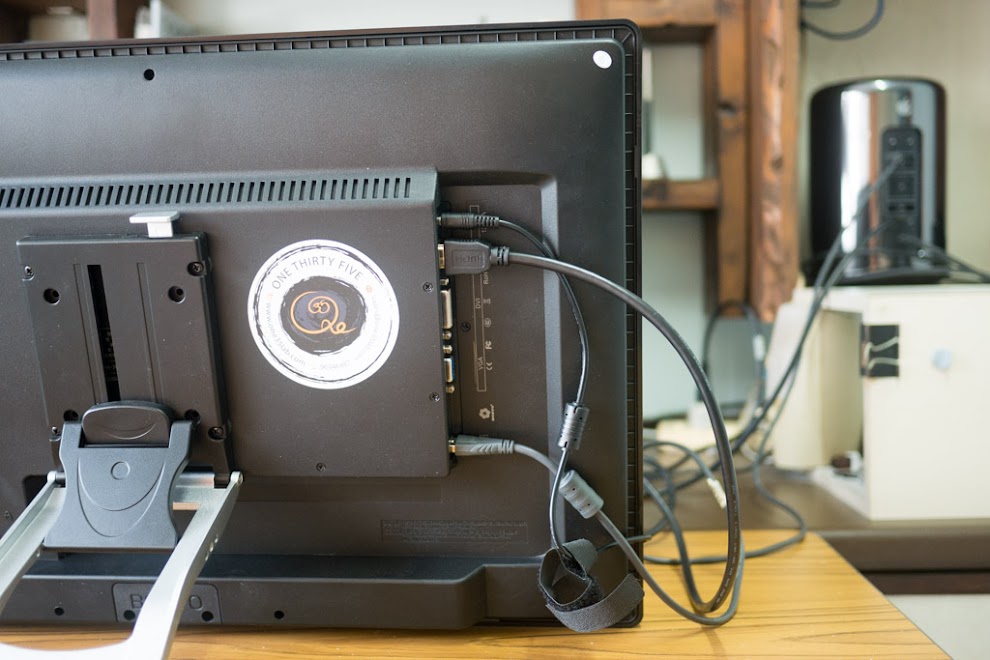 I like how the cables are attached to the sides. 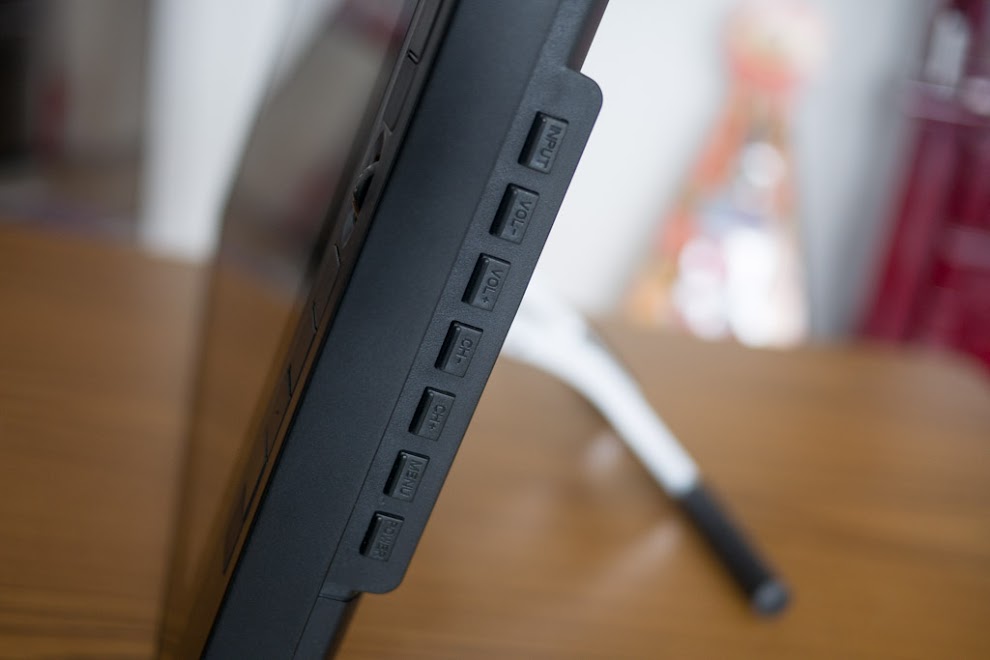 These are the display settings and power buttons on the monitor by the right side. 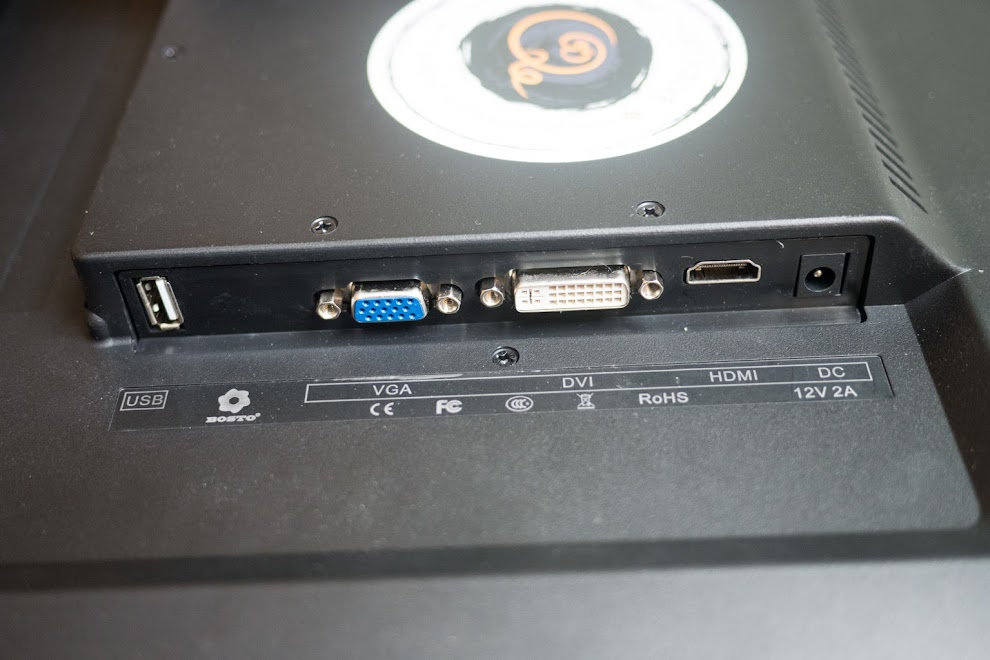 The graphic connections it supports are HDMI, DVI and VGA. Then there's the USB port that makes the pen work. 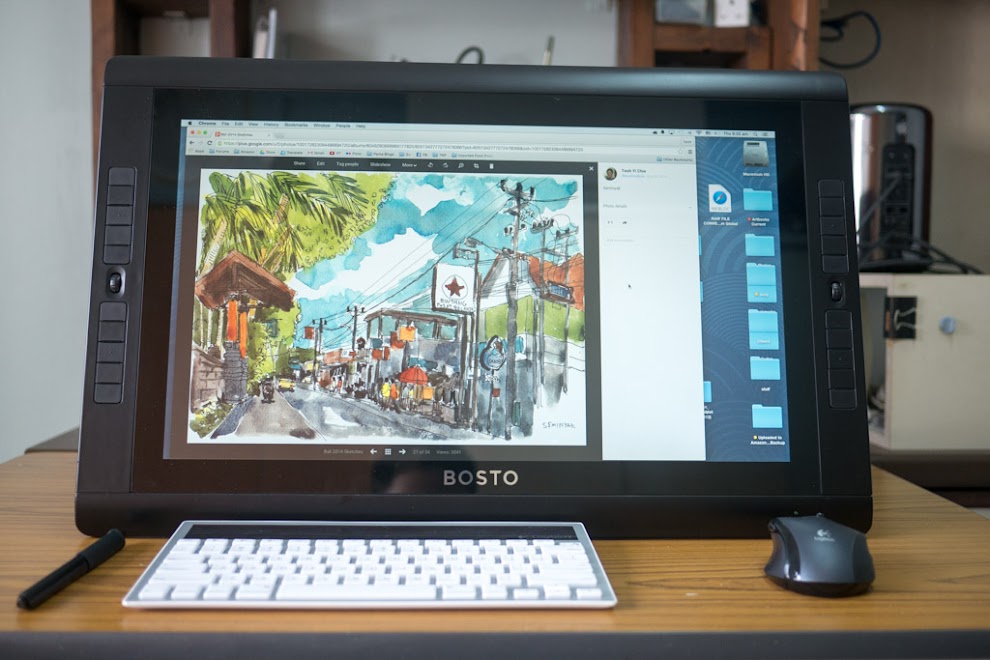 When plugged in, the 22HDX should automatically detect your system (Mac and Windows). There's no need to choose which cable connection before powering up the screen.

When you plug in two display cables to your Mac, you'll go into the Mirroring mode instantly and see two screens showing the same thing. You can also choose to turn off mirroring and have your desktop extended. This is great for checking colours on a better screen. Colours on the Bosto screen are quite good to start with.

I'm not sure how desktop extension works with Windows because I don't have an extra ports on my graphics card.

Bosto uses a 1920 by 1080 resolution H-IPS LED screen with 178 degrees of viewing angle. This is important because you'll be tilting the monitor a lot and with the wide viewing angle you get to see the same colour regardless of the tilt of the screen. 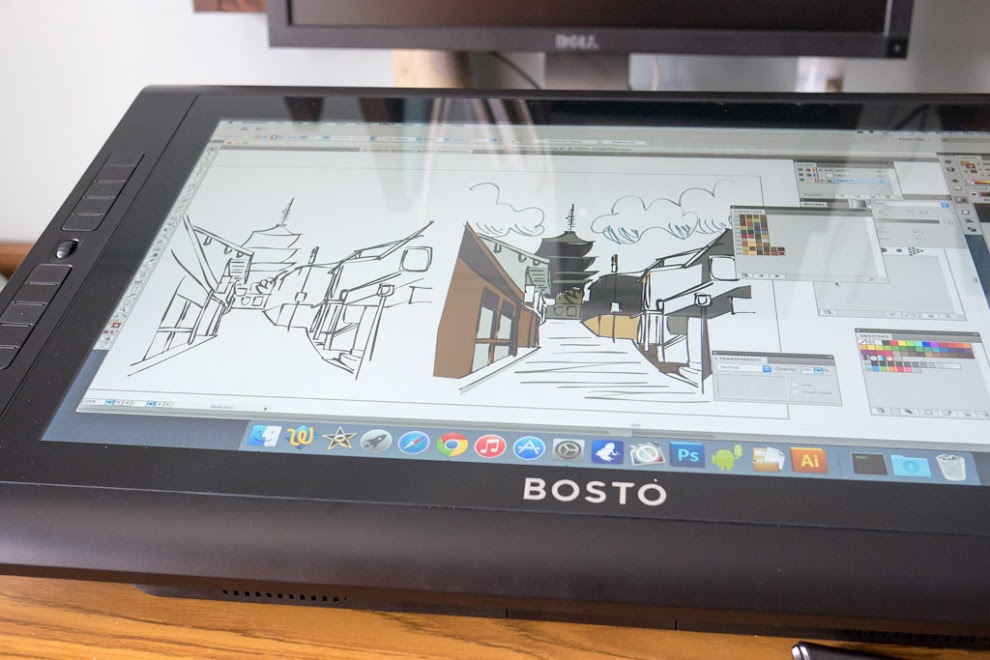 The screen has a wide viewing angle so the colours do not shift when the monitor is tilted. 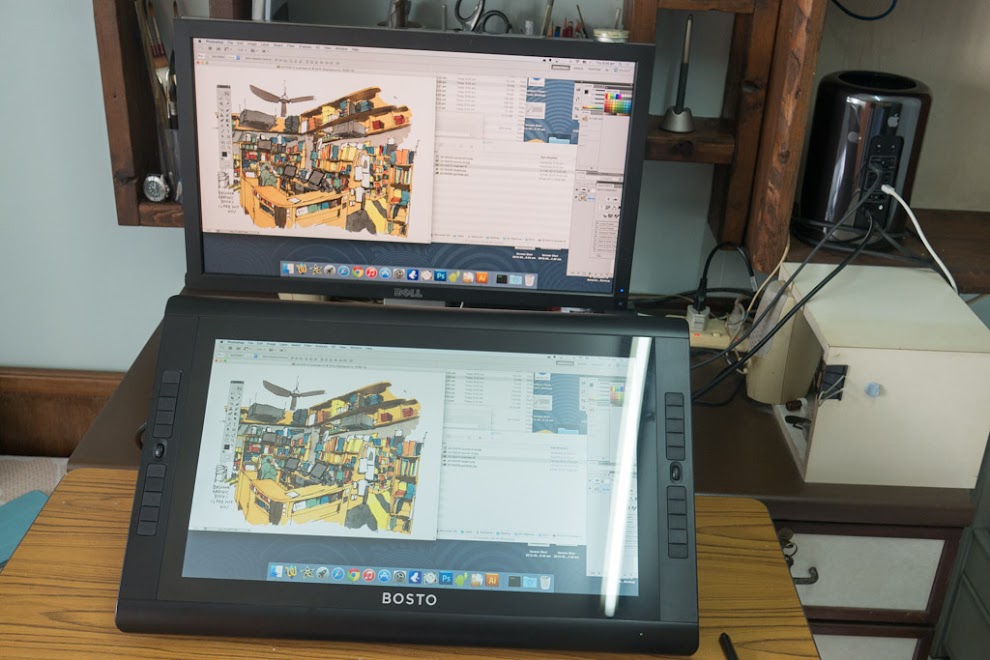 Here are how the colours compare with the 10-bit Dell. Colours from the 22HDX out of the box is already pretty accurate. You can adjust it further from the monitor's or your computer's settings. 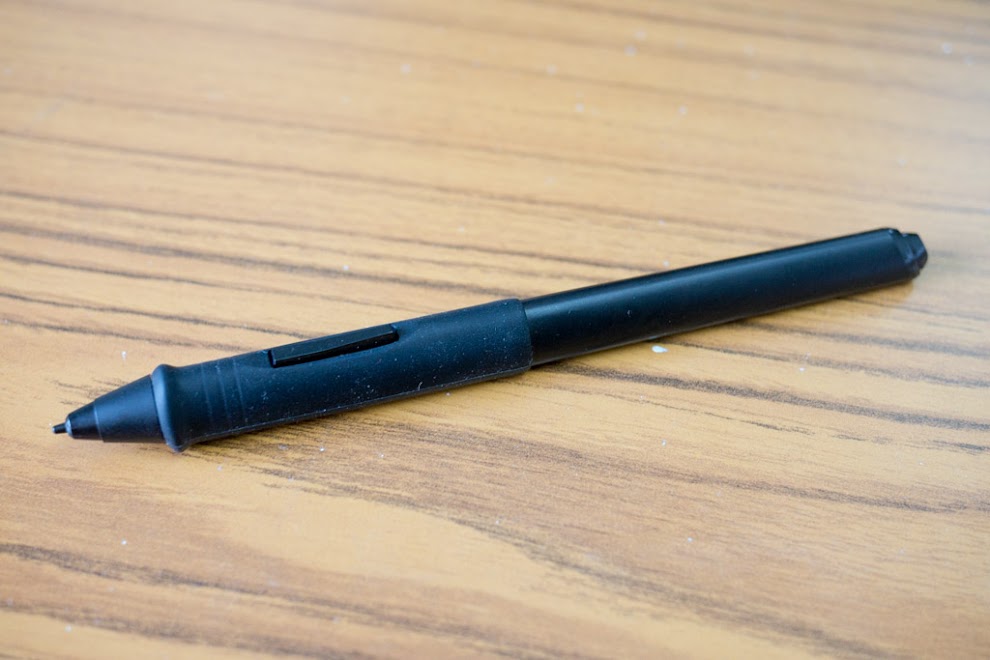 Here's the wireless stylus. It's not battery powered so it doesn't require charging.

The cursor is set directly beneath the tip of the stylus. When you move to the far edges of the screen, expect some parallax error because the screen is huge, and the drawing surface is a few millimetres above the LED screen. 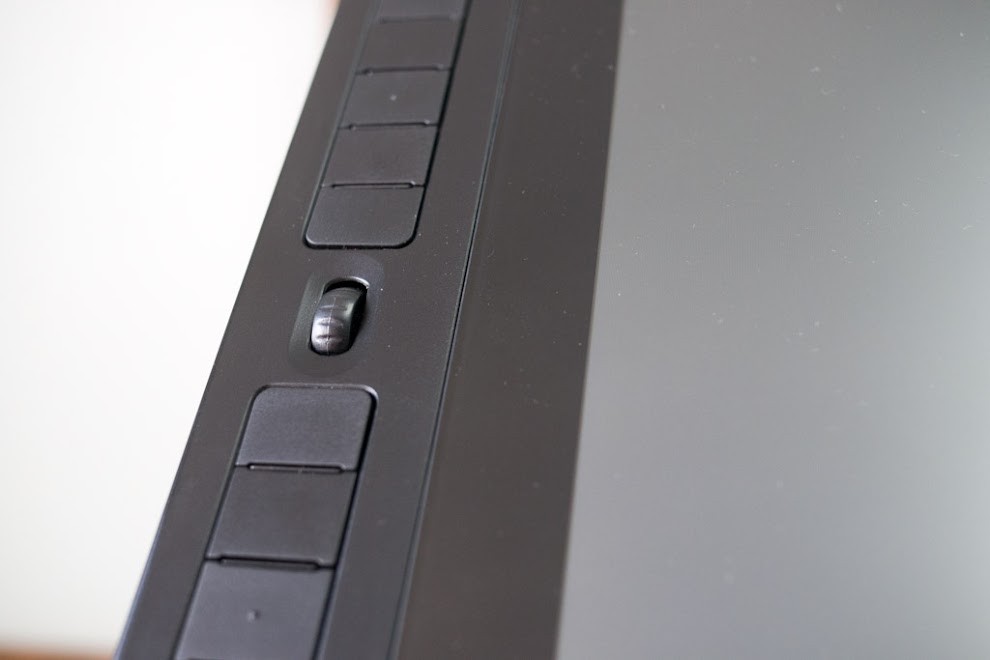 There are 10 shortcut keys on each side of the screen. 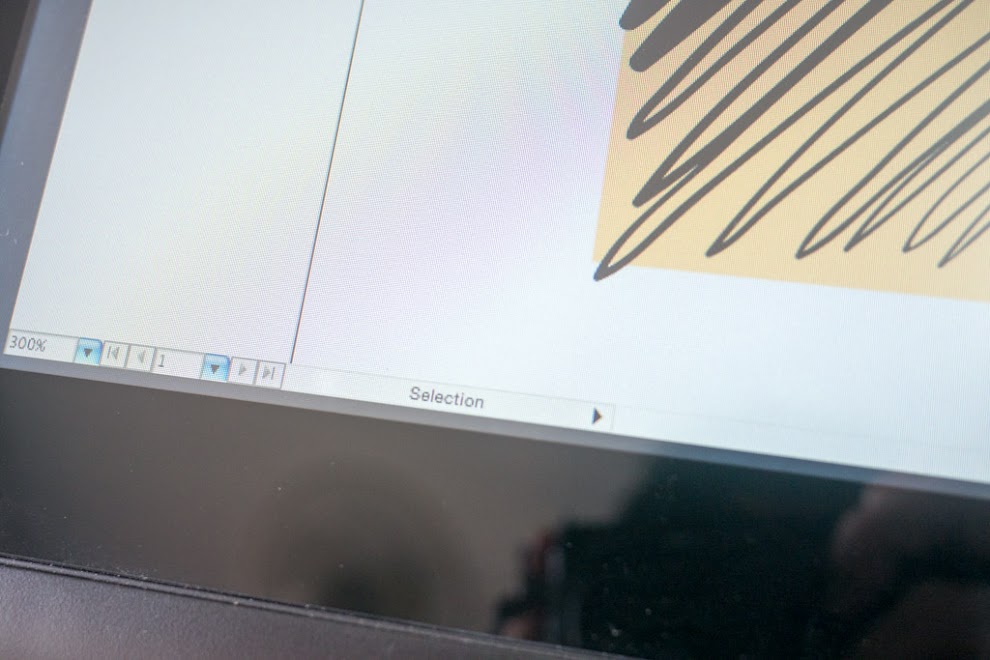 On the screen, I detected several light spots. Clearly a manufacturing issue. They are just bright spots, luckily not too bright to be distracting when working. I don't notice them unless I look out for them. For a unit that cost close to a thousand dollars, there should not be such issues. There are no dead pixels on this set thankfully. 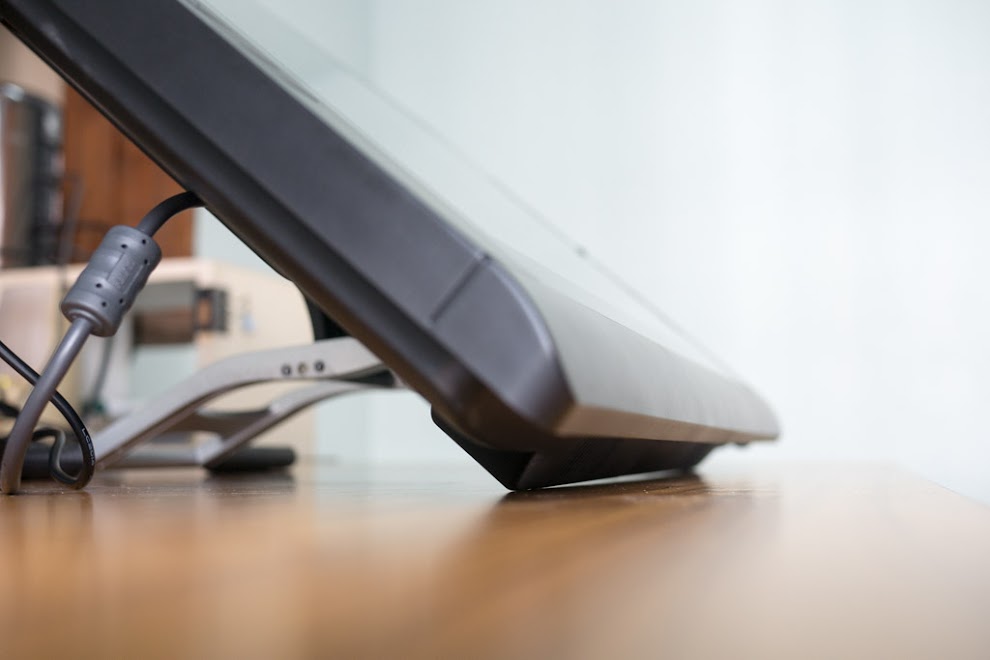 Here's how it looks when the monitor is tilted.

Here's the pressure sensitivity test of the Bosto 22HDX on Windows 7 as compared to my old Intuos3 tablet. There's very little difference. I feel that Wacom's strokes taper off more smoothly though.

Pressure sensitivity works very well. You can also adjust the sensitivity of the stylus through the settings. The default settings suits me.

Strokes from the Bosto look very comparable to the Intuos3 tablet. Performance is wonderful overall. There's no lag. Tracking is instant. Lines have no jitter. Unfortunately, I don't have a Cintiq to compare it with.

These are strokes created with Adobe Illustrator CS5 on Windows. Absolutely no problems at all.

Here's line art drawn in Illustrator on Windows. I used only one brush size so the difference in stroke thickness comes from the pressure of the Bosto pen. Pressure sensitivity works well.

Using the Bosto on a Windows machine is a satisfactory experience. On a Mac, it's a different story.

Drawing with a Mac

On a Mac, the pressure sensitivity is wonky and very frustrating to use. It's unusable to me for work.

HOWEVER, I did see a perfectly working demo of the Bosto 22HDX running on Mac before. I'm using Mac OS 10.10.2, Photoshop CS5 with Mac drivers version 0.3. I was told by the distributor that they used Mac OS 10.9 at that time, so that could be the reason.

This is a sketch on a Mac. The main problem is the when you draw fast strokes, your lines will break up into pieces. It seems the tablet is unable to track that fast. For the sketch above, I have to draw very slow which is unproductive at all because that's the only speed you can draw without the problem of breaking lines.

If you look closely at the words "FAST STROKES" which I wrote quickly, you'll notice the lines are broken up and stroke widths are random all over the place.

It's definitely a driver problem because the same Bosto hardware works perfectly well with a Windows machine.

This is a pressure sensitivity test with Illustrator on the Mac. It works fine.

Here's a 31min+ video review from another user.

For Mac users unfortunately, the Bosto 22HDX's pressure sensitivity does not work well with Photoshop and has a high tendency to produce funny strokes. It's disappointing because the hardware is perfectly capable of handling the features, so it comes down to a driver issue.

For Windows users, it performs exceptionally well when it comes to drawing. My only complaint would be the inability to customize the shortcut keys. The latest driver v0.62 that I downloaded from Bosto's website does not seem to come with the shortcut keys drivers. Weird.

If you're using Windows and looking for a good and affordable pen display tablet. I highly recommend the Bosto 22HDX.

4 out of 5 stars on Windows. One star deducted because of the issue with shortcut keys.

If you want to find out more user experience, check out the Bosto online forum.

Just check out more reviews of the Bosto 22HDX on the Amazon product page at
www.amazon.com/gp/product/B016FESMOA

Those in Singapore can get it from Bosto Singapore at bosto-singapore.com or www.facebook.com/BostoSingapore or Basheer Graphic Books.

Hi. I love reading your reviews. They are so clear and well written. Thank you.
I am currently researching this Bosto 22HDX pen, and I found a review which claims that the lines are very jittery. Other users chimed in and claimed that their Bosto's produce lines that are slightly jittery, but tolerable.
https://groups.google.com/forum/#!topic/bosto-user-group/8JMBFDtkmzA
Did you experience that at all during the use of you test? If not, what is your opinion about the reliability of the test product as apposed to those reviews?