This guest review was written by Taylor Simpson 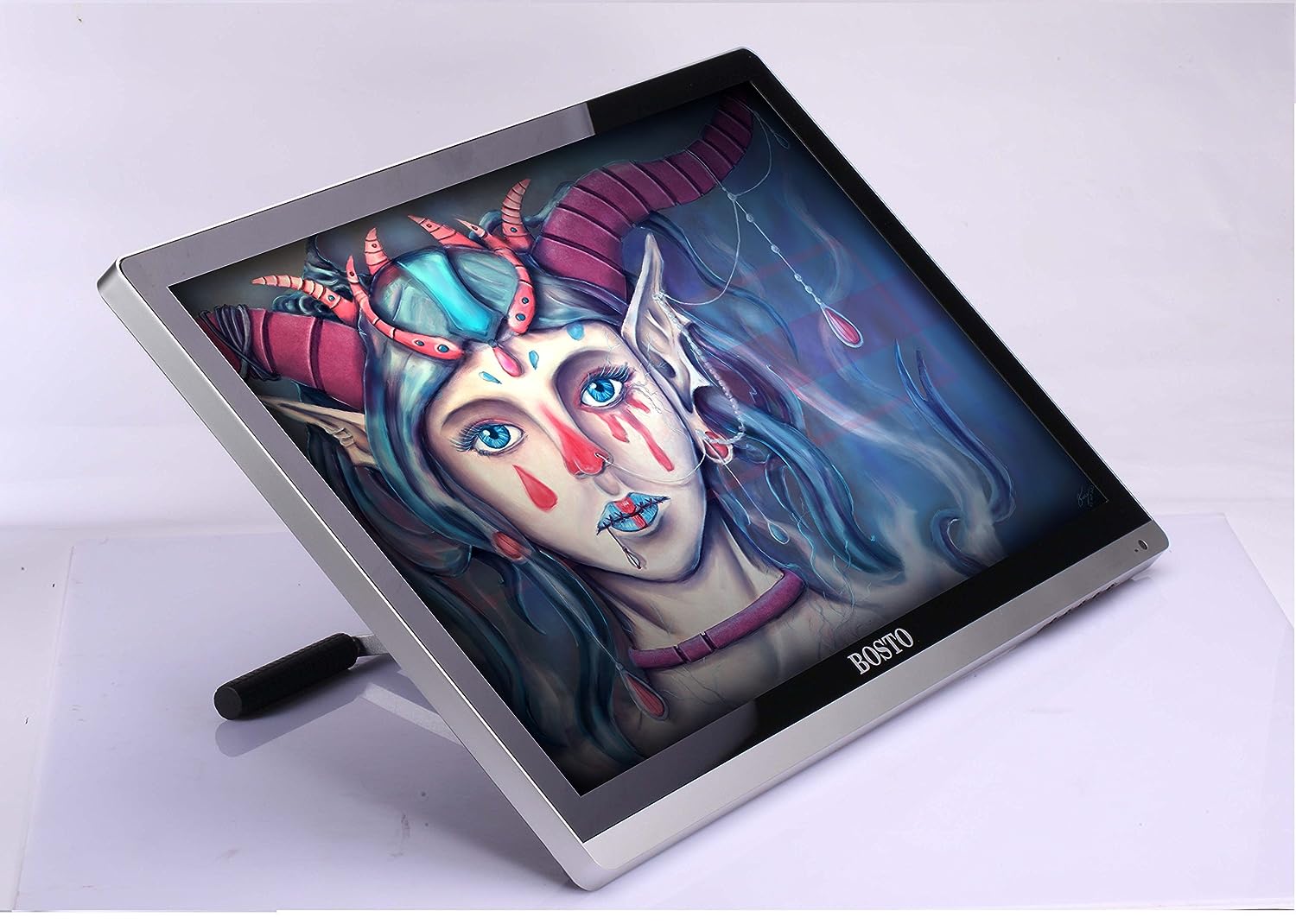 Hello! I am Taylor Simpson here to guest review the Bosto Kingtee 22u Mini.

To preface, this the mid-2014 version of Kingtee 22u Mini. Bosto is known for changing the specs of their tablets’ specs while keeping the general naming scheme. Such as the Kingtee 14WX, which originally had a 1366x768 screen is now the 14WX+ which has a 1920x1080 screen as well as the 22HD having a case similar to their 22HDX is now called the 22HD Mini, which has the body of the 22u Mini with a different digitizer. As of writing, this is the only version of the 22u Mini available.

I began learning digital art about 5 years ago on a Wacom Bamboo. Around a year ago I started to become interested in display digitizers when I heard in a podcast an artist talk about how their tablet was bottlenecking their skills. At the time, I felt the same and started looking into alternatives to my trusted Wacom brand and decided to take the risk of finding a tablet that would be cheaper in price, but not in content.

After a year of searching for the right display (and failing to make my own), I stumbled upon the Bosto Kingtee 22u Mini. At USD $649 with 1 week free international shipping, I could not pass it up.

Along with the display and the pen, it comes very securely packed with 5 nib replacements, an external 12v PSU, threaded HDMI cable, male-to-male USB for the digitizer, USB pen charger, and a warranty card, driver disc, microfibre cloth, and manual in a single bag.

The specs that enticed me were the large display of 21.5in with the also high resolution of 1920x1080. The display is a beautiful glossy LED H-IPS screen that is viewable at any angle. Because the surface is glossy, your pen will slide around easily, like drawing on smooth plastic or glass. Many tablet PC owners know this feel and I have gotten used to it. Though, you can purchase a 22in matte Cintiq screen protector on Amazon if you want the paper feel.

If the tablet you’re looking for doesn’t have any version of IPS, don’t buy it unless you sit directly in front of the screen. Without IPS technology, colours become washed out the instant you change your viewing angle. This is no problem with the Kingtee 22u Mini. Rated at 14ms response time, there is basically no detectable lag between you and your brush strokes. Though, the display does have a bit of a space between the surface and the screen that is less than 1cm, but does cause some parallax.

Pen is pressed against the surface. The parallax is real, but subtle when drawing.

The stand is the generic stand you will find with any Cintiq alternative and does it’s job well. It attaches by screwing the stand into the VESA mount holes on the back. It is stable when drawing, has multiple degrees to rest at, and had rubber feet to keep from moving too easily. I use the tablet with the stand that comes with it as I have a glass desk and have no way to attach an arm. Though, I would recommend using a VESA arm since you can move it around however you like, though it is not required. 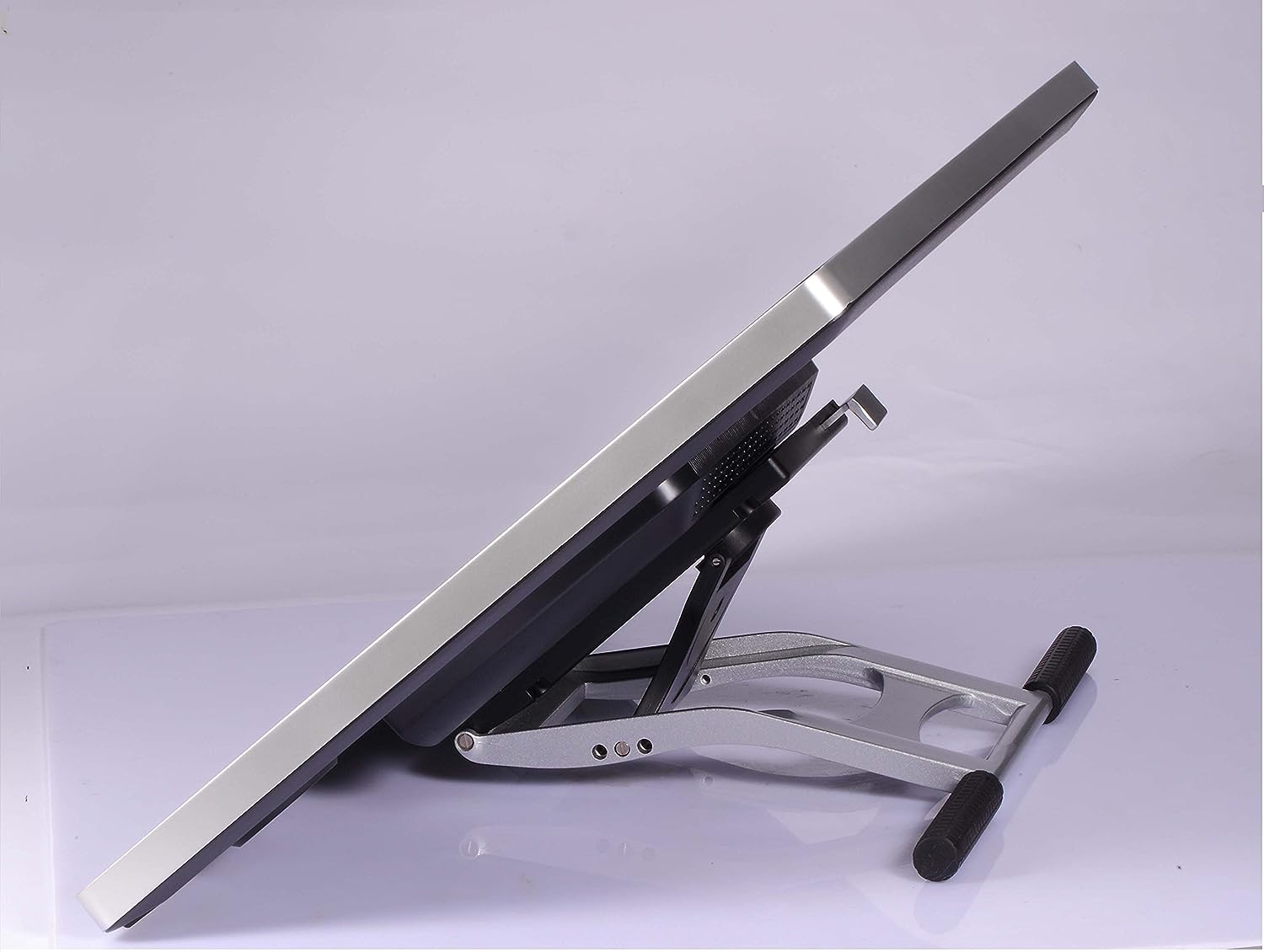 Stand is placed upside-down because of the direction the ports face.

The 22u Mini also includes an HDMI and USB port along with a VGA and DVI ports as well. There are also control buttons on the bottom for toggling the power, enter menu/select, menu up, menu down, and menu exit.

The menu up/down also control volume. This is odd because the case also has speakers grills, though the entire tablet lacks physical speakers. There is also the problem of the ports are aiming down. This means that when operating face up on the stand, you are going to definitely be pushing down on these cables, kinking them, having an unstable stand as they push your tablet off of the desk, as well as running the risk of breaking your ports or cords.

Here the stand is placed normally, showing that the little amount of room your cables have.

The pen is wireless, but includes a non-removable AAAA battery that could be replaced if you are careful enough. Though, I doubt you’ll see this on iFixit anytime soon. Even with the battery, the pen feels as light (or as heavy) as the default Intuos 3 pen as it also has the same circumference at the base to easily grasp your fingers around. The battery life lasts up to 80 hours on a single 10min charge. The pen has the 2 side buttons. The eraser has been replaced with a charging port for the battery.

Performance of this display is what you would expect from a Cintiq alternative below $1000. What is that? Jitter. There isn’t much to be noticed when zoomed into an image, but if you are drawing when at 50% zoom, be sure to find your lines all jaggy and gross. Though, I’m not saying this is as bad as jitter has been in the past. The 22u Mini has massively improved on jitter from previous Bosto tablets and the jitter seen here is almost non existent unless you do fine line work. Though, I feel that any Cintiq alternative should come with a free bundled copy of Lazy Nezumi Pro to combat the initial jitter of the cursor.

Lazy Nezumi Pro (LNP) is a program that allows human-interface devices of all kind that control the cursor to smoothen the input by averaging the X/Y axis. There are different settings for different amounts of jitter, along with custom settings for stylizing the way you draw. LNP is great for Cintiq alternatives that have low quality digitizers that allow the display to interfere with the connection between the board and the pen. If you are a student, you can buy the program for $20, but it also included a trial version to test it out. But be warned, it is a Windows only program. LNP isn’t necessary, but it will come in handy in you want to do precise line work.

Speaking of software, the Bosto Kingtee 22u Mini currently only supports Windows. It doesn’t support OS X or Linux, but the developers are “working on it.” Though, with the different series of tablet that already allow OS X and have newer digitizers installed, I doubt they are going to have a .dmg anytime soon.

The programs that I have used this tablet with have been Adobe Photoshop CC, Adobe Flash CC, Autodesk Sketchbook, Autodesk Mudbox 2015, Blender, and browser-based art sites such as Draw Something, Doodle or Die, and iScribble. This tablet works well with whatever you throw at it. The programs work flawlessly with both pressure and the key bindings. The buttons on the pen feel nice to click as they give a definite “pressed” or “unpressed” feeling. The screen has not become hot while I’ve worked on it. Not even warm. With the air vents on the back and the PSU being external, and the screen containing LEDs instead of cathode rays like other displays keeps it from raising temps. But my hands sweat while drawing, anyway, so I wear an artist’s glove while working.

Here are a few examples of pieces I have done while using this tablet:
Adobe Photoshop CC:

I mostly use Photoshop as I have spent most of my years drawing with it. I use Sketchbook for the amazing symmetry tool for planning 3D models, a feature I wish Photoshop had. Blender needs to be rebinded as the Middle Mouse bind in the Bosto Digitizer Panel doesn’t work at all. I use Flash for little animations and I haven’t used Illustrator as I haven’t needed to do anything with that program so far.

Below are some tests of line work with and without Lazy Nezumi Pro on.

This was drawn at 50% on a 4000x4000 canvas on the 1920x1080 screen. This image’s size is 1:1 of what I was drawing. Varying of letters, pressure, and the doodle’s face length are only from my own inconsistency. This is a test to show off the jitter produced by the digitizer.

This is the image at 100% cropped to 1920x1080, showing off that LNP does help, but even without it, your line work can still be very neat. If you are unsure, download the trial of LNP before buying.

After three months of using this tablet, it is a godsend. It has helped out with my animation, my painting, and my line work. It has it’s flaws, but it’s positives weight out the negatives in this case. While this is my first tablet from Bosto, I have heard a lot of great things from their users with the new 2014 models. I will definitely recommend these tablets to any artist that is on a budget.

If you want to find out more user experience, check out the Bosto online forum.

Just check out more reviews of the Bosto 22u Mini on the Amazon product page at
www.amazon.com/Graphics-Bosto-Kingtee-22U-mini/dp/B00MJYFCVW