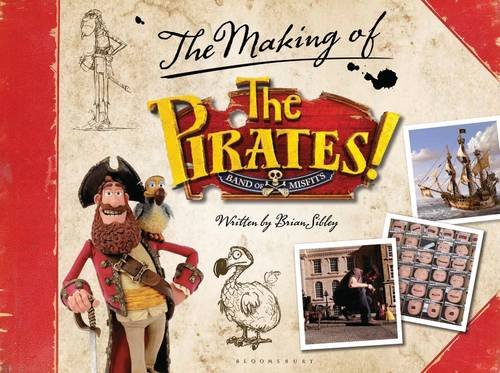 Apparently, The Making of The Pirates! In an Adventure with Scientists is the official title of this Aardman and Sony Pictures Animation film, and The Pirates! Band of Misfits was the title for the American and Australian release.

This 144-page hardcover authored by Brian Sibley looks at the production process in detail and is filled with great set photos, commentary and art. There are lots of interesting stories, such as getting Hugh Grant to read the line "And?" over 40 times, or looking for miniature eyelids on the floor because some animator dropped it.

The lively and whimsical character designs are from Jonny Duddle. There are sketches, coloured illustrations, sculpts and the finished puppets. The names are real funny. Pirate Captain, Pirate King, Black Bellamy, Cutlass Liz, Peg Leg Hastings and my favourite The Surprisingly Curvaceous Pirate. There are 112 puppets compared to 20 for The Curse of the Were-Rabbit. The logistics of making a stop-motion film like this is incredible and mind-numbing. Several puppets have to be created for each character so that different scenes can be shot at the same time.

The book also covers the making of the set, props, and puppets. Photos of the actual model of the pirate ship and Blood Island is a sight to behold. You also get to see how the puppet armature and what's hidden underneath Queen Victoria's dress — lots of metal. Many of the costumes are actually made of silicone instead of cloth.

This companion is equally as entertaining as the film.

amazing book! not just only because of the fantastic art related to film, but it can be considered a complete description on "how aardman make stop motion movies" in general: every people counts, and you can really feel it!

I totally agree with you!!
I really love this book since there is a lot of illustration of every details in the background of the movie and great pictures of the characters and what they are composed of,
A must have for the fans.