Due to some good luck, I managed to buy this brush set at only USD $26 on Amazon. It's usually sells above $70.

The brushes come in a nice wooden box with ventilation holes. There are metal latches by the side to hold the cover in place.

Inside the four brushes are laid on some foam cushion. When the box is closed, the cushion will hold the brushes in place so they won't run around. In addition to the brushes, there's also a brush soap included.

Prices for the individual brushes are listed beside and they total up to US $75.58 at the time of this writing. Throw in the wooden box and this seems like a good deal. A wooden brush box usually cost around $10.

Da Vinci Series 5580 Cosmotop Spin Round Brush, Size 12
This is a large synthetic brush with orange brushes. It's quite soft but the bristles go back to shape after each application. As a synthetic brush, it holds less water compared to a sable brush of the same size. It will require frequent reloading.

Da Vinci Series 18 Nova Aquarelle Flat Wash Paint Brush, Size 16
This is the Series 18 aquarelle brush with real plexiglass handle. You can use the sharp edge at the end for scrapping and creating lines. The bristles are synthetic and quite firm compared to the Cosmotop mentioned earlier. This brush does not hold a lot of water and is good for short strokes.

The different hair lends their attribute to this brush. You get the sharp point from the sable, water-holding capacity from the squirrel hair, stiffness and durability from the Fitch.

This brush can hold a good amount of water, and it releases water well enough to create nice even wash. This is one of the better brush in this box set. Overall, it's a really good budget brush for those who want to save money by not going all sable.

Da Vinci Kolinsky Watercolor Series 36 Red Sable Paint Brush, Round, Size 2
This small brush is the Series 36 red sable watercolour brush. It's a Kolinsky brush so it has the best water retention but at this size, this brush is really for putting in small details.

Here I've used the Cosmotop Spin size 12 to wet the large area with water first to prepare for some wet on wet.

Then I used the flat brush to put in the French Ultramarine and Burnt Sienna, allowing them to mix in the clear water added earlier.

The building in brown behind the car was also painted with the flat brush. It took me several strokes to fill it because the water kept running out.

I coloured the colour and most of the other areas with the smaller Cosmotop Mix B size 6. It's a good brush for putting in general details. The small size 2 brush wasn't used in this sketch because it was not needed. 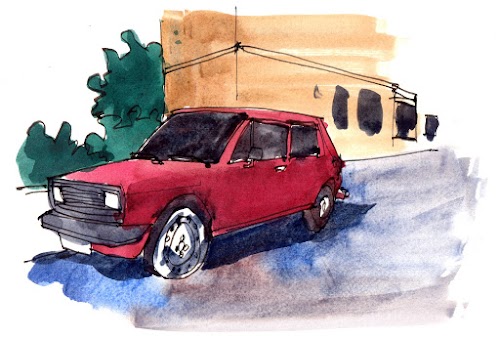 Here's the scan of the watercolour sketch. The lousy yucky paper is 300gsm Akvarelpapir -- incapable of glazing and handles water poorly as if the surface is not sized. Argh.

The brushes in this box set are more suitable for short stroke painting. Most of the brushes don't have good water-holding capacity, and the nice Series 5530 Cosmotop Mix B is only size 6 and doesn't hold that much water because of its size.

Before you buy this set, you should know your style of painting. If you like big washes, work big, then it might not be the most appropriate set to get.

I think it's better to buy the brushes you need separately instead. Check out the versatile Versatil brushes.

A much better, but more expensive, box set would be the Series 5240 box set with nice wash brushes and a full unmixed Kolinsky sable brush.