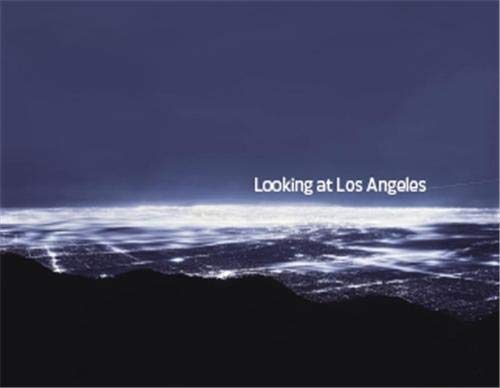 How do you photographically sum a city like Los Angeles? The editors of this sumptuous coffee-table book give it a go and I think succeed, just look at the names in the Book Description above. Eighty-eight photographers in all and some I've never heard of but their 225 images do give a feel of this extraordinary endless place. Look through the pages and the only conclusion is that this must be Los Angeles.

The book is loosely divided into themes: freeways and autos, shops, buildings, suburbs, signs, vegetation, swimming pools, beach and the last section LA at night. Julius Shulman with fourteen photos rightly has the most. No other photographer captured the range and style of LA contemporary architecture over the decades. His well-known night photo of Pierre Koenig's Case Study home is included. Another famous photo is Stephen Shore's stunning 'Beverley Blvd and La Brea Avenue'. Other photos just stop you like Michael Light's aerial freeway shot on page forty-three or John Divola's '5800 South block of Hoover Street' which opens up to an image just over twenty-seven inches wide on pages seventy-seven and eight. However, as far as I can see there is nothing to represent NWA-land: Compton or Watts.

The photos (in 175dpi) are impressively large and mostly one to a page and more or less split equally between color and black and white. There is though an annoying fault with the production - so four stars - the captions are all at the back making the reader to constantly keep turning the pages to find out about a photographer and their work. Most pages have plenty of space for a caption. There is an extra wrinkle unfortunately because many pages have no numbers either: 56 to 61, 156 to 161, 172 to 189 and in the night section nothing between 200 and 225. It must have been amateur night at the publishers and it really is inexcusable for an expensive book!

Part of the twenty-four page night section with no page numbers. Most of you will be familiar with the stunning 1960 Shulman shot of Pierre Koenig's house.

On the right Julius Shulman's 1938 shot of the Dunsmuir Apartments.

The interesting endpapers, not by Ed Ruscha but Robert Flick. Between Hollywood and Wilshire, 1994.

On the left a shot by Garry Winogrand from 1964. Joel Meyerowitz took Mayco, on Wilshire in 1976.

On the right one of my faves: Beverly and La Brea by Stephen Shore, 1975. It should be available as a poster.