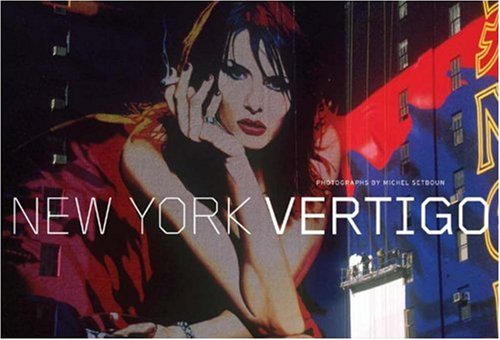 Michel Setboun says in the book's intro that he was intimidated by the Big Apple at first because so many others had photographed the city in all its moods and he wanted to avoid the commonplace but as you look through the 120 photos you'll realize that he needn't have worried because he has managed to come up with something fresh and original with many of the photos though not all of them.

The book is aimed at the gift market which I thought was rather unfortunate because if it had fewer shots and it was printed in an art-photo book format on quality matt paper it would look stunning.

Where Setboun has delivered is in his many daytime photos of buildings reflected in the glass of skyscrapers and the amazing nighttime shots of mid-town Manhattan ablaze with lights from traffic, offices, neon signs and ads on buildings. Other shots that grabbed me were several where his camera looks almost straight down on an intersection with skyscrapers running out of the photo at different angles, there are couple of the Times Square area that are just remarkable.

Overall an impressive package (especially as copies can be picked up really cheaply on the net) with presentation box covered in reflective foil though the actual book production is reasonable. Incidentally Setboun has done a similar gift book package of Venice.

The book comes in a neat box with printing on reflective foil which allows two thin magnets on the flap to close the box.

How can you go wrong if you have a camera and Madison Avenue is facing you like this? A wonderful shot.

A rather dull looking title spread. The obvious place to create an eye catching montage of images or whatever, to sum up the Big Apple.

Right: roof gardens on top of the British Empire and La Maison Francaise buildings, part of the Rockefeller Center on the Park Avenue side.

Left: A knockout shot of the Queensboro Bridge.

Top of the Rockefeller Center.

The colorful magical roofs of Soho.