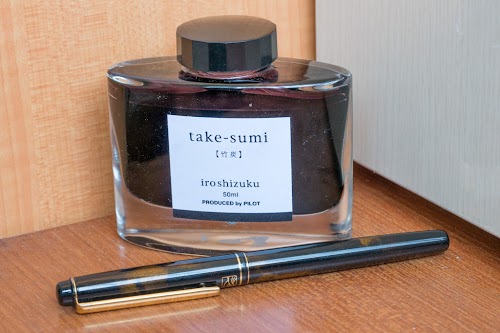 Here's the Take-Sumi (Bamboo Charcoal, 竹炭) black ink from the Pilot Iroshizuku series of ink. This ink is designed and made in Japan by Pilot for use in fountain pens. 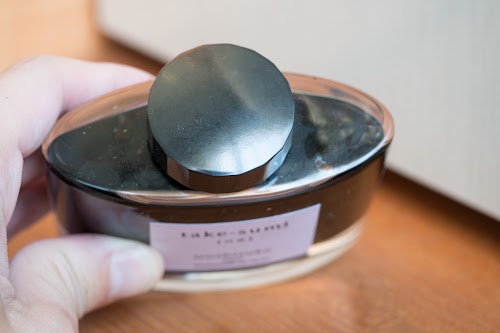 The Take-Sumi comes in a beautiful blown-glass bottle. 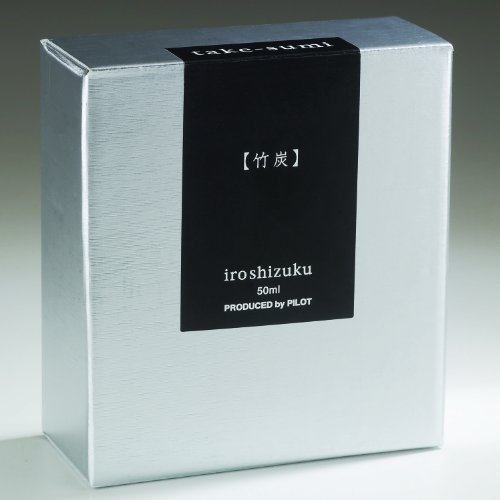 That's how the packaging looks like. Inside, the cardboard is folded in such as a way that the ink bottle is not touching any side of the box. 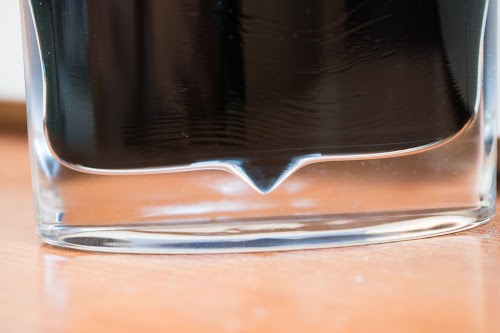 There's a small tapered well at the bottom for you to get the last drop of ink.

For this ink test, I've used a brush. Note that I've edited only the exposure of the scan slightly and left the paper texture visible.

This is one of the darkest black ink I've used. However, to get this level of intense black, you have to use the ink in concentrated form. Even when writing, the black is this intense.

One key feature of this ink is how beautifully and smoothly the dark areas blend to the less concentrated areas.

The ink feels slightly less viscous compared to India ink that's for sure. It's somewhat as fluid as the Noodler's Bulletproof Black ink.

It holds up well to erasing.

It's able to produce sharp edges nicely without feathering on this cartridge paper that I tested on.

There's a cool tone bias as the ink gets drier.

I'm impressed by how dark and even the black areas are filled. Other black inks I've used would show at least a faint trace of blotchiness, but not with the Take-Sumi.

The only question I have is whether this ink is lightfast.

Unfortunately, the Take-Sumi fails the waterproof test spectacularly. The ink even breaks down to show the slight cool blue tone bias.

The strokes with water added would feather horribly, and when you wash out the water, what's left behind is surprising a sharp but washed out impression of whatever that's left of the original strokes. 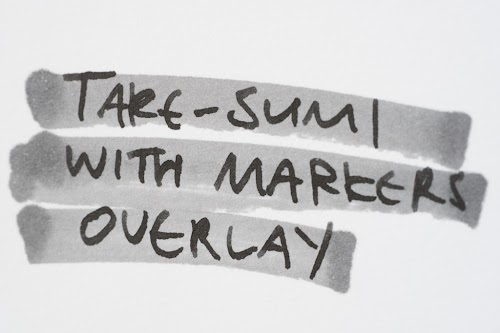 I've used the alcohol-based Copic markers to go over the inks. Take-sumi hold up well. 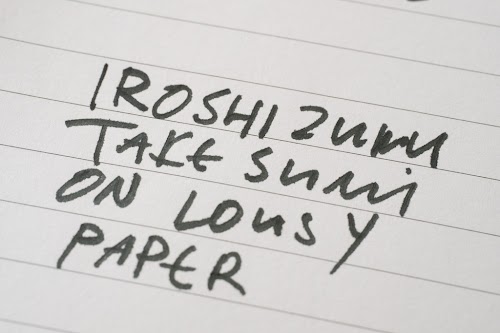 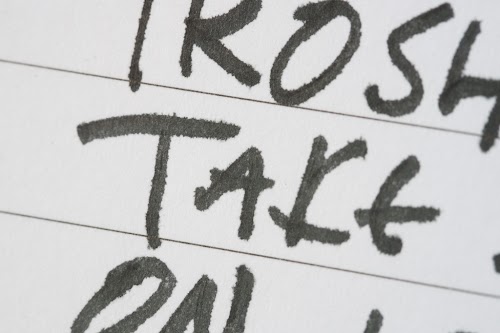 The ink feathers on lousy paper, which is not different from other India inks that I've tried. 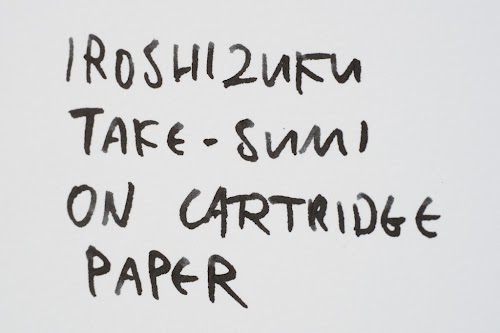 Here are some handwriting on cartridge paper. It writes smoothly. 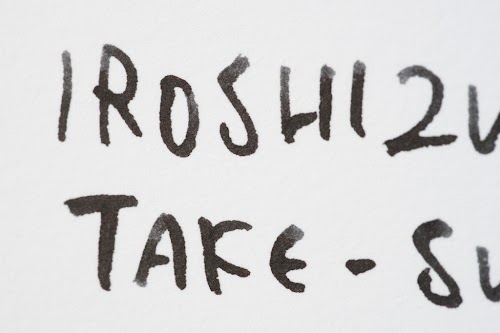 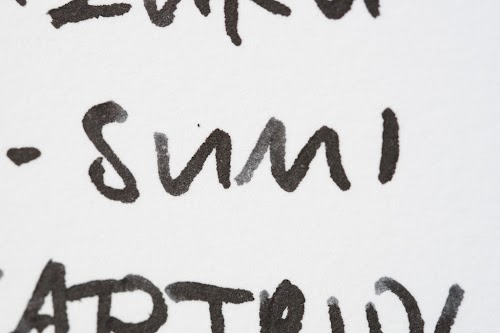 For handwriting, the strokes may have some gradation going on too which I find to provide visual interested. It looks nice for writing. However for creating lines for artworks, perhaps it's not that suitable unless you want that little bit of unpredictability. 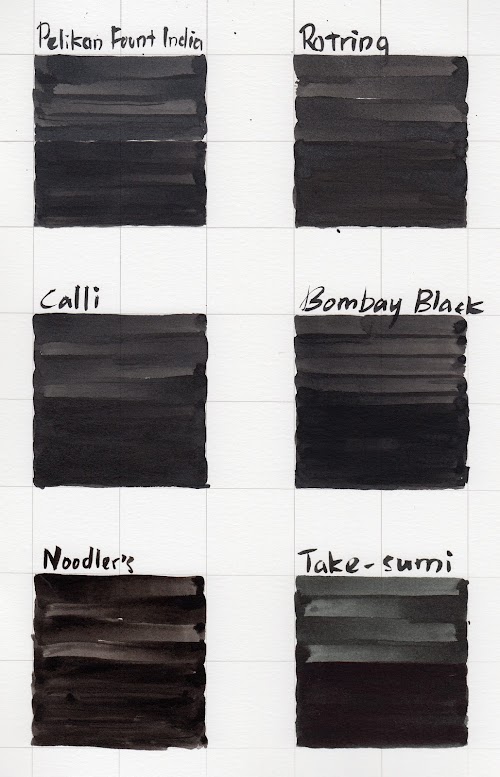 The picture above compares various brands of black ink. Top half of the square's a single layer wash and the bottom has a double layer wash.

Take-Sumi has the most obvious cool tone bias. Areas where the ink is most concentrated are the darkest and it becomes pale quite quickly as the concentration drops. Note the gradation from dark to less dark. Once the second layer is added, the black becomes extremely dark, slightly darker than the Bombay Black India ink. To get intense flat blacks with Take Sumi, load your brush with loads of ink.

Drying time is average to fast. The ink gets absorbed by the paper quite fast and results in faster drying time.

Take-Sumi is an interesting ink. I like how there's gradation in the strokes at time. If you want it intensely black, you can just use a loaded brush and the resulting wash area will look nice with no evidence of blotchiness.

It's a fountain pen ink so it's not surprising that it's not waterproof.

If you want to use it for artworks, you have to know it's peculiar quirks.

It's quite an expensive for a 50ml bottle when you can get other fountain pen inks such as those from others brands like Parker, Waterman or even the Noodler's Bulletproof at less than half the price. Pilot Iroshizuku inks sell for much cheaper in Japan.

Overall, it's a good ink but it's an expensive ink.

Follow the direct links below to get the Pilot Take-Sumi Ink on Amazon.com | Amazon.ca | Amazon.co.uk | Amazon.de | Amazon.fr | Amazon.it | Amazon.es | Amazon.co.jp