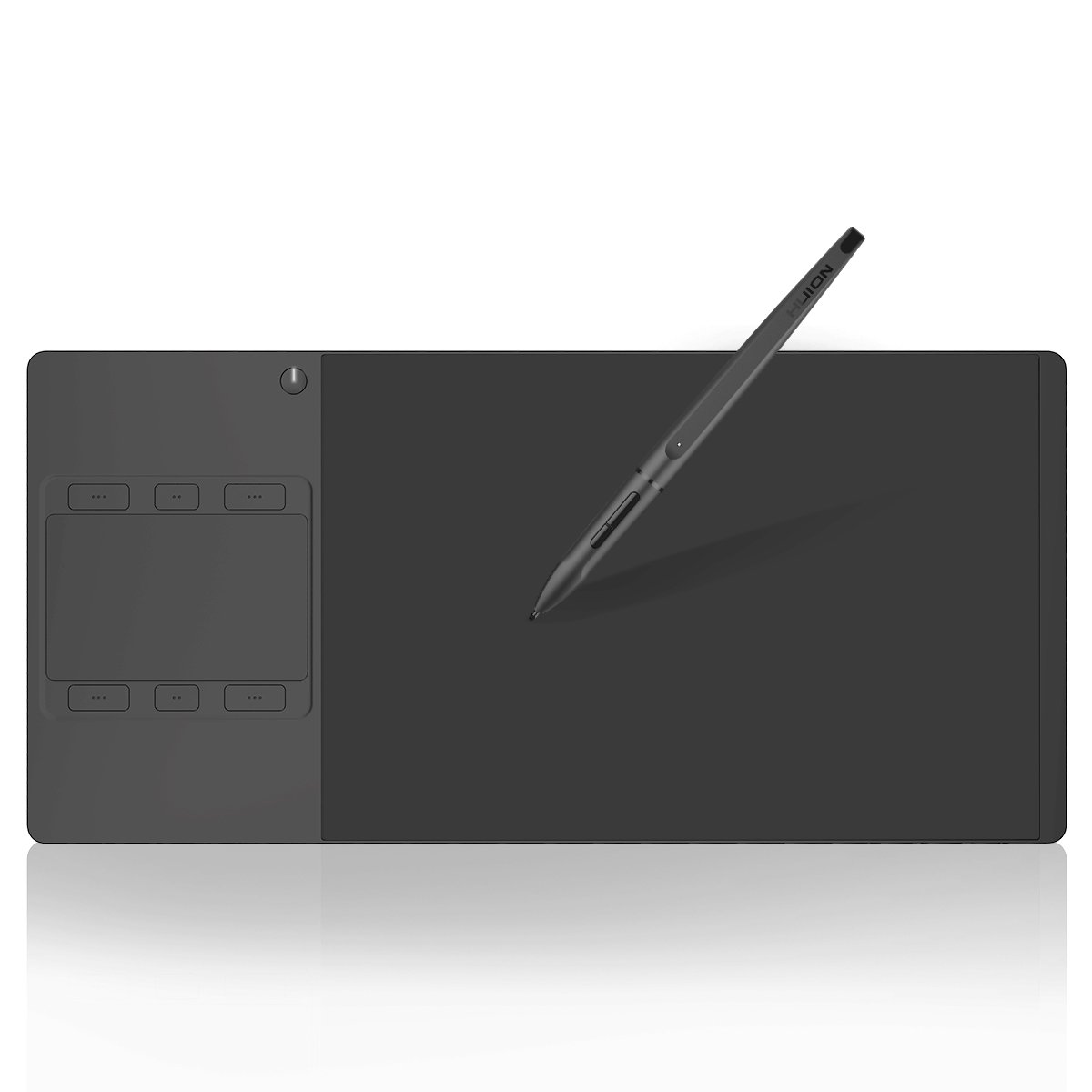 Huion makes a lot of drawing tablets for digital artists. The Huion Inspiroy G10T is one that shows us that Huion is capable of building high quality products as well, which is not to say that their other products are low quality. But the G10T is on another level in terms of build quality.

I've used this for a few weeks already ever since Huion mailed me a review unit, and now's the time to share my thoughts.

Here are all the items in the box:

The current price is US $140. At this price range, it competes with the Wacom Intuos but it has a build quality to compete with the more expensive Wacom Intuos Pro.

The drawing area is 10 by 6.25 inches. The surface is smooth matte and offers a nice feeling as the pen glides on its surface. The bezel around the tablet is minimal and corners are rounded off. The tablet takes up a small footprint on the tablet, except that it's quite wide.

The back is a solid piece brushed aluminium. The build quality for the whole tablet feels sturdy and classy, high end. All other Huion tablets feature plastic bodies so when I first saw this tablet, I was actually blown away but the design and build quality. It's a step up from their other tablets, like the H610 Pro, 1060PLUS or the wireless Giano WH1409. The metal back and wonderful finishing make this feel like a premium product.

One of the key features is the touchpad on the side that comes with 6 physical shortcut buttons.

The trackpad works like those on laptops. You can use finger gestures on it, like pinch to zoom, double finger drag to pan, etc. Unfortunately, it does not work as well as it should be. First, you need to use an app that is capable of taking advantage of finger gestures. And even when in an app that supports finger gestures, it does not work that well too. It is like the finger gestures are bind to keyboard shortcuts. Rotating does not work well with the apps I've tested on. By that, I mean sometimes the app or touchpad would not recognise that I am rotating with my fingers. The same finger gesture would work perfectly on a smartphone, iPad or other mobile screen tablets. Even something simple like scrolling webpages with the touchpad is not smooth. Panning in graphics software is a hit and miss too.

That's the USB receiver should you want to use the tablet without cables.

You can still use the tablet while it's charging. It charges via a USB C cable. So there's no more fumbling on which side to inside the micro-USB cable. The battery included is a 2500mAh battery, about the capacity of smartphone batteries, and is supposed to last for 40 hours. Battery life is good. I've not had to recharge for weeks after the first charge. Of course if you use it more regularly then it would drain the battery faster.

That's the pen case that comes with all the other accessories. It's also very well built and closes with magnets.

In it are the pen, 8 extra nibs, nib remover and the USB wireless receiver.

The pen also needs to be charged to before it can be used. The battery is inbuilt and the charging cable looks like proprietary ones.

Build quality of the pen is great and it's comfortable to use. However, the 2 side buttons are flushed too close curve of the body so it's difficult to feel them or know that they are there by feeling. Having the buttons more extruded would have been better.

There are various settings that you can change, namely:

While the build quality is generally good, there are some quirks or driver related issues. I've tested the tablet on both Windows and Mac and here are my findings.

The pen does not work instantly upon reboot. You have to wait for the driver to load first.

Photoshop CS5 (Mac). I had to wait a while for the pen to not produce dots. Another frustrating thing is I can't use the Cmd+Spacebar and click with the pen to zoom in or out. I can do that with a mouse, and with Medibang Paint Pro, but somehow that shortcut does not work here, even though the icon as I press down the keys clearly show the magnifying glass.

Update: The latest driver solved the problem mentioned above. However, the strokes now taper more abruptly. The 2nd generation G10T has much smoother lines with Photoshop.

There are many quirks in different software. I am not able to test this against a larger number or different versions of software but so far, it's quite frustrating to face so many bugs.

There are usually some bugs with Huion tablets but the amount of bugs with the G10T is more.

So while the build quality is excellent, the functionality is questionable. The combination of issues I've faced makes it a deal breaker.

How well the tablet is going to work really depends on which app and OS you're going to use it with. The touchpad does not work well with finger gestures so it is as good as not being there. More shortcut buttons would have been better.

When it works, it works really well. When it's not, it feels like you're spending extra money on features that don't matter because ultimately, you want to use this thing to draw. If you just want a tablet for clicking, like working with Lightroom, then yeah, go ahead. When it comes to drawing strokes, well ...

My recommendation is to read more reviews before getting one. That's just my opinion. I'm surprised that all the other reviews currently on Amazon are all positive: 1, 2, 3, 4, 5, 6.

If your experience with your G10T is different from mine, I would love to hear from you in the comments section.

If you do want a wireless tablet, I recommend checking out the large Huion Giano WH1409 or the medium size DWH69 too.

I just got this tablet and the pen doesn't work with adobe Photoshop. it works fine in illustrator but not photoshop. when I use the brush tool in photoshop the stylus pen just makes a singe dot and doesn't do continuous lines. I have a macbook pro running OS 10.10.5. I downloaded the most recent driver on the tablet's website. I have adobe photoshop CS5 V12.1. Any ideas/help would be great;y appreciated. the tablet company has not been very much help.

Just got this and for the life of me it won't connect wirelessly. I am noticing it seems to still be charging. Could that be the issue? The booklet mentions a button on the side but there is no button for the device. Any help would be much appreciated. Thanks.