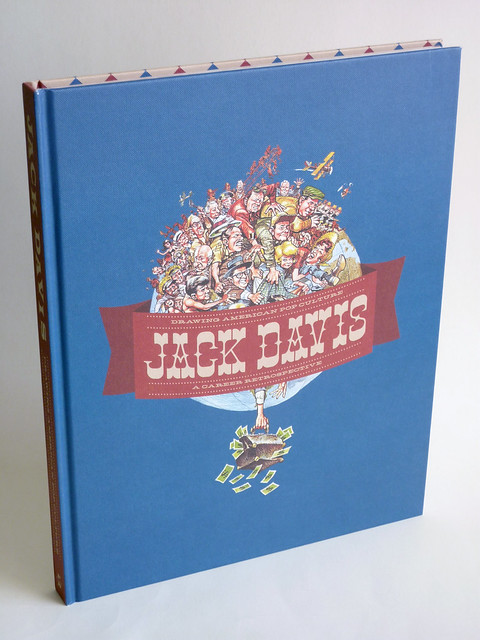 Book description and pictures are from Fantagraphics:

Jack Davis arrived on the illustration scene in the euphoric post-war America of the late 1940s when consumer society was booming and the work force identified with commercial images that reflected this underlying sense of confidence and American bravado. Advertising agencies were looking for new ways to tap a rich and expanding market, and there was a vast array of media that needed illustrations. Davis’ animated and exuberant images possessed a sense of spontaneous energy that proved to have universal appeal in every medium he worked in.

Beginning with his masterful pen and ink cartooning at EC Comics, he quickly forged a reputation as one of the most versatile artists in comics, drawing humor, horror, and war stories. In Harvey Kurtzman’s MAD, especially, Davis made a mark as a master of caricature, composition, and wild, anarchic crowd scenes, practically vibrating with energy.

After stints at MAD, Trump, and Humbug — three humor magazines that defined the satirical zeitgeist of the ’50s — Davis went on to become the most successful commercial illustrator of his generation, illustrating movie posters, magazine articles, magazine fiction, LP jackets, and more.

Jack Davis: Drawing American Pop Culture is a gigantic, unparalleled career-spanning retrospective, between whose hard covers resides the greatest collection — in terms of both quantity and quality — of Jack Davis’ work ever assembled! It includes work from every stage of his long and varied career, such as: excerpts of satirical drawings from his college humor ’zine, The Bull Sheet; examples of his comics work from EC, MAD, Humbug, Trump, and obscure work he did for other companies in the 1950s such as Dell; movie posters including It’s a Mad, Mad, Mad, Mad World, The Bad News Bears, Woody Allen’s Bananas, The Party, and others; LP jacket art for such musicians and bands as Hans Conreid and the Creature Orchestra’s Monster Rally, Spike Jones and Ben Cooler; cartoons and illustrations from Playboy, Sports Illustrated, Time, TV Guide, Esquire, and many others; unpublished illustrations and drawings Davis did as self-promotional pieces, proposed comic strips that never sold (such as his Civil War epic “Beaureagard”), finished drawings for unrealized magazine projects — and even illustrations unearthed in the Davis archives that the artist himself can’t identify!

Much of the material will be scanned directly from original art, showing the painterly brush strokes and black and white pen work with far greater fidelity than any previous reproduction ever has. Many paintings and illustrations are accompanied by preliminary drawings that demonstrate the evolution of Davis’ drawing process.

I want this bad. Looks wonderful. But the price is killing me.

@David
The book is going for a 2nd reprint.

Do you have any idea when? I've been waiting for The Art of John Carter as well and prices on Amazon is around $300-400 used.

@David
I think soon. As for John Carter, I'm not too sure.