That's Jimny, the jeep that I rented in Bali for two weeks.

To drive or not to drive in Bali

Prior to deciding on how to travel within Bali, I've one friend who suggested renting a car, citing that's that only way you can see Bali.

On the other hand, I've a few friends who have been to Bali and they suggested to hire a driver instead. I was reading around in travel forums and that's the advice most people offered to those going to Bali for the first time.

I can't remember the exact reason why I decided to drive myself. It could be that car rental is very affordable. I rented the Suzuki Jimny for 100,000 Rupiah/day, that's around US$10/day. Or it could be that since I'll be sketching most of the time, it's more convenient to have a car around where you can stop anywhere where you wanted to sketch.

Previously in Cambodia, I traveled by tuk tuk and I could sense that the drivers aren't particularly happy with too many stops along the way. But hey, when you see something you want to photograph, you have to stop or the photo will be blurry.

Where to rent your car or motorbike in Bali

I rented my through a website that I found on recommended on some travel forum. I chose that particular one because of the price but there's a catch that you'll find out later.

The thing is, there's no shortage of car rental services in Bali online or offline.

The advantage of renting online is that you can choose to receive your car at the airport. From there, you would save one taxi trip to whatever the place you're going.

My jeep arrived with the fuel meter almost empty. I've found out that that's how car rental works there. It comes with car insurance but no petrol. Oh, be sure to check that car registration is included.

Petrol is cheap. At the time I was there, it's 6,500 Rupiah/litre. I could fill up to full tank with around US$20 and that can last me a few days before reaching half tank. Of course if you're driving from Kuta to Ubud to the mountains, i.e. long distances, then obviously you use more petrol. But petrol is affordable so that's the least of the worries. Pertamina petrol stations are not hard to find also, or just ask people around.

If you're renting offline, there are shops that offer car and motorbike rental services everywhere. You can find them easily. You can even bargain if you have knowledge of rates online. So actually, other than the free ride from the airport, there's really not much difference between renting online or offline.

I would say driving conditions in Bali is like walking in a crowded train station. There are people going in the general direction because they are heading to somewhere (e.g. exit) and then there are a lot of people just standing and not moving, waiting. To move, you just have to navigate yourself around the space that's available. In short, it can be chaotic. You will be flanked by motorbikes everywhere. That seems to be the mode of transport for many people there. You'll see a lot of cars on the road also. And don't be surprised to see motorbikes driving against traffic.

Traffic gets to a crawl at touristy places (such as Kuta, Seminyak, Legian, Ubud) from 1030am onwards and earlier at the city centre Denpasar even in early morning. 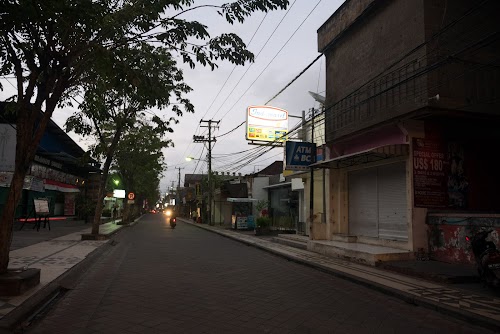 I wake up at 5am to drive just so I don't have to spend twice the amount of time on the road driving and waiting. Yup, 5am, I'm that type of tourist. Also, driving in the morning is cooling.

Other than the highway, all other roads are a little bumpy with occasional small potholes. Motorbikes should drive a bit slower. My top speed is 70kmh on the highway. On other roads, it's usually 40-50kmh, or slower because of bad traffic. Most people there drive around 50kmh I would say. A traffic free journey from Ubud to the airport takes about 50 minutes.

And when you're at a road bend, definitely slow down because you will not be able to see who's coming out of that bend at what speed. There are many road bends like that.

Motorbikes drivers should be more alert because you won't know if that car beside you is going to sideswipe you especially if they don't signal. So drive either in front or behind. Drive defensively, or slowly when in doubt. People there honk when overtaking, or when the light is green and you aren't moving for that split second.

Driving long distances is quite tiring, more so if you're stuck in traffic.

If you can get a car with auto-gear, that's great.

Get a GPS if you're driving

Definitely get a GPS if you're driving. It's no brainer. I managed to get around with Google Maps navigation just fine. Google Maps is very accurate and shows even the small roads.

Occasionally, there are a few stray markers. For example, if you're going to Gunung Kawi, you should go to Jalan Raya Tampaksiring which is the main road. I followed a small road which I thought was closer but that's the wrong way! And Pura Goa Lawah near the sea, not somewhere else as another Google map location marker suggest.

The road signboards there are quite unhelpful because there are so few. Also not very helpful if you don't know which region leads to which.

At more touristy places, especially around the beach or Legian street, it can be difficult to find parking so just ask around.

In Singapore, you can only park where there is a parking sign. What a world of difference.

The only toll that I paid, if that's a toll at all, is when I was visiting Lake Batur. There's a small toll for driving around the Kintamani region around Lake Batur.

Have that international driving license

You should get an international driving license if you want to drive in Bali.

Out of the two weeks I was there, there's only one occasion where I saw police stopping drivers to check for the license.

If you do get stop, I heard you have to pay a fine. Not sure how much, but as with pricing in Bali, you should base what you suppose is fair according to the price of a meal. Some sites mention ~US$5, my friend paid US$8, I've also heard those who pay US$20 for not wearing seat belts. 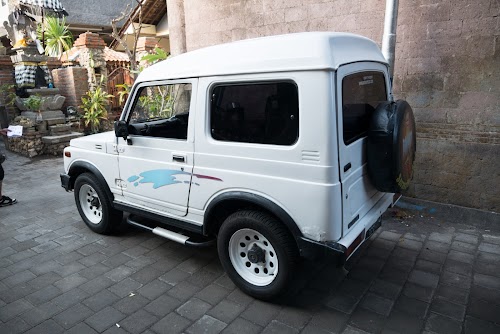 Jimny's a two seater jeep with small holes on the floor board of the guest seat. When you run over water, the water will splash in from the bottom.

The pedal is sensitive and not sensitive at the same time. I've lost count of how many times I had my engine cut because I did not get the first gear biting point just right.

I took half a day to figure out where and how to engage the hazard light, but that's just me.

The suspension is like crap. Once you go over 70kmh, the jeep starts to vibrate in a not-so-good way.

The seat belts are extended all the way, loose.

The driver seat is laid back all the way without any possibility to adjust it forward. It's like sitting on a sofa and driving, except the seat is harder. I had to force myself to sit straight to drive as if the back is not there. Most of the time after a long drive, my shoulders would ache.

Most of the time, I drove with my bare feet. I used my slippers on the dashboard to hold my phone in place so that I can see the map on the screen.

Once, I got stuck on a slope. It was quite impossible to engage first gear to climb. I had to reverse back to the bottom of the slope. Thank goodness there were no other vehicles around.

Air-conditioning is weak. I drive around with the window down. My hands received a good tan from the sun shining in.

Since the rubber seal around the window does not seal properly, rain does come into the car from the top of the window.

Driving in the rain is no joke. The downpour can be heavy reducing visibility to just a few vehicles ahead. But this would be nothing compared to the roofless jeep I drove once in torrential rain — no kidding.

But overall, I love this jeep. I like the size because it's small enough to go into small roads. It's quite an adventure by itself to be driving such an old car.

After driving in Bali, I can't imagine getting around Bali by not driving, I mean by taxi.

People who can drive there all drive. The only people on bicycles are tourists. It's not joke riding bicycles with Bali's crowded road condition, and not forgetting that you have slopes to conquer.

The thing is, hiring a driver may be a smart thing to do too. Driving is tiring and the places of interests are not located within short distances between one another. It takes time to drive from one place to another, and it's tiring if you're going to a few places in a day. After driving for two weeks in Bali, I can truly appreciate and understand what hired and taxi drivers have to go through.