A gift set of the thirteenth and fourteenth Complete Peanuts volumes, in a handsome and durable slipcase. The Complete Peanuts 1975-1976: Good grief, Charlie Brown, we're halfway there! That’s right! With this volume, The Complete Peanuts reaches the halfway point of Charles M. Schulz’s astounding half-century run on the greatest comic strip of all time. These years are especially fecund in terms of new canine characters, as Snoopy is joined by his wandering brother Spike (from Needles), his beloved sister Belle (from Kansas City), and... did you know he had a nephew? In other beagle news, Snoopy breaks his foot and spends six weeks in a cast, deals with his friend Woodstock’s case of the “the vapors,” and gets involved in a heated love triangle with Linus over the girl “Truffles.” The Complete Peanuts 1975-1976 features several other long stories, including a rare “double track” sequence with two parallel narratives: Peppermint Patty and Snoopy travel to participate in the Powderpuff Derby, while Charlie Brown finally gets to meet his idol Joe Shlabotnik. And Peppermint Patty switches to a private school, but commits the mistake of allowing Snoopy to pick it for her; only after graduation does she realize something’s not quite right! Plus: A burglary at Peppermint Patty’s house is exacerbated by waterbed problems... Marcie acquires an unwanted suitor... Charlie Brown and Peppermint Patty become desk partners... The talking school building collapses... Lots of tennis jokes... and gags starring Schroeder, Lucy, Franklin, Rerun, Sally, and that vicious cat next door. It’s another two years of Peanuts at its finest! Featuring an introduction by comedian Robert Smigel (Triumph the Insult Comic Dog, Saturday Night Live).

The Complete Peanuts 1977-1978: As the 1970s wind down, the last two recurring Peanuts characters have fallen into place: Snoopy’s brother Spike and the youngest Van Pelt sibling, Rerun. But that doesn’t mean Schulz’s creativity has diminished; in fact, this volume features an amazing profusion of hilariously distinctive new one- (or two-) shot characters! For instance, in an epic five-week sequence, when Charlie Brown, found guilty by the EPA of biting the Kite-Eating tree, he goes on the lam and ends up coaching the “Goose Eggs,” a group of diminutive baseball players, Austin, Ruby, Leland, and —did you know there was a second Black Peanuts character, aside from Franklin?—Milo. Also: a tennis-playing Snoopy ends up reluctantly teamed with the extreme Type “A” athlete Molly Volley... who then reappears later in the book, now facing off against her nemesis, “Crybaby” Boobie. (Honest!) Add in Sally’s new camp friend Eudora, the thuggish “caddymaster” who shoots down Peppermint Patty and Marcie’s new vocation, an entire hockey team, and a surprise repeat appearance by Linus’s sweetheart “Truffles” (creating a love triangle with Sally), all in addition to the usual cast of beloved characters (including the talking schoolhouse and the doghouse-jigsawing cat, who gets ahold of Linus’s blanket in this one), and you’ve got a veritable crowd of characters. Introduction by 30 Rock's Alec Baldwin.

It’s another four years of the greatest comic strip of all time, full of laughs and surprises. 1461 black-and-white comic strips

Charles M. Schulz was born November 25, 1922 in Minneapolis. His destiny was foreshadowed when an uncle gave him, at the age of two days, the nickname Sparky (after the racehorse Spark Plug in the newspaper strip Barney Google).

In his senior year in high school, his mother noticed an ad in a local newspaper for a correspondence school, Federal Schools (later called Art Instruction Schools). Schulz passed the talent test, completed the course and began trying, unsuccessfully, to sell gag cartoons to magazines. (His first published drawing was of his dog, Spike, and appeared in a 1937 Ripley's Believe It Or Not! installment.) Between 1948 and 1950, he succeeded in selling 17 cartoons to the Saturday Evening Post—as well as, to the local St. Paul Pioneer Press, a weekly comic feature called Li'l Folks. It was run in the women's section and paid $10 a week. After writing and drawing the feature for two years, Schulz asked for a better location in the paper or for daily exposure, as well as a raise. When he was turned down on all three counts, he quit.

He started submitting strips to the newspaper syndicates. In the spring of 1950, he received a letter from the United Feature Syndicate, announcing their interest in his submission, Li'l Folks. Schulz boarded a train in June for New York City; more interested in doing a strip than a panel, he also brought along the first installments of what would become Peanuts—and that was what sold. (The title, which Schulz loathed to his dying day, was imposed by the syndicate). The first Peanuts daily appeared October 2, 1950; the first Sunday, January 6, 1952.

Diagnosed with cancer, Schulz retired from Peanuts at the end of 1999. He died on February 13, 2000, the day before Valentine's Day—and the day before his last strip was published—having completed 17,897 daily and Sunday strips, each and every one fully written, drawn, and lettered entirely by his own hand—an unmatched achievement in comics. 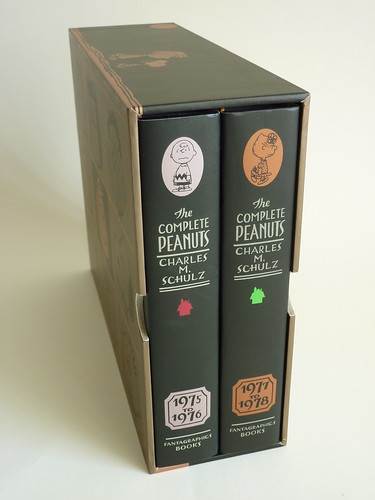 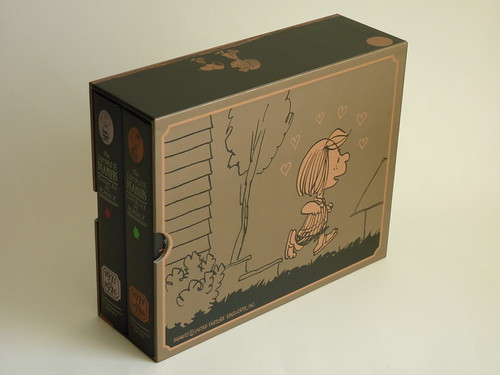 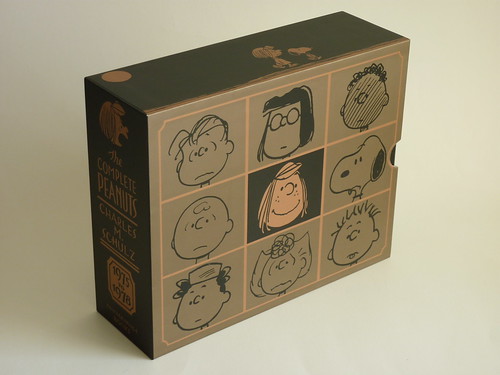 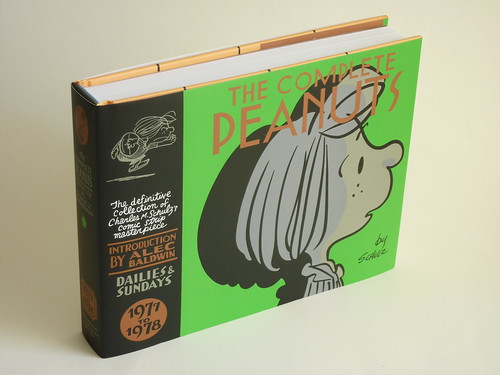 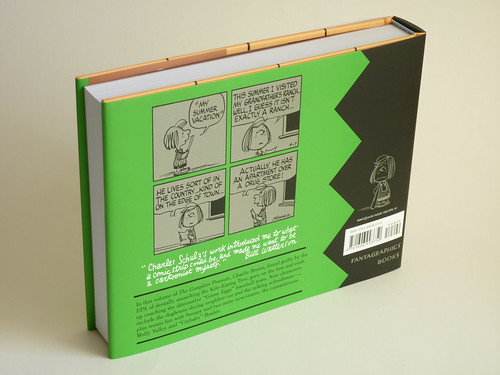 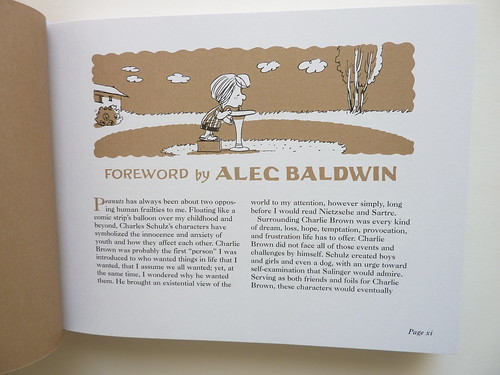 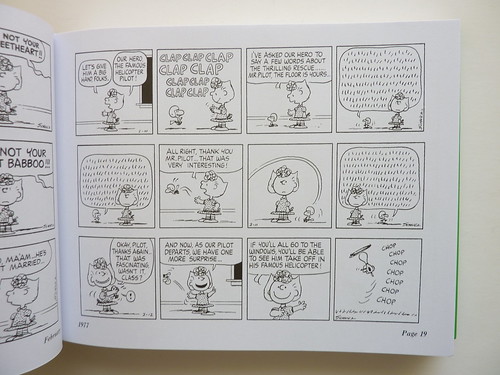 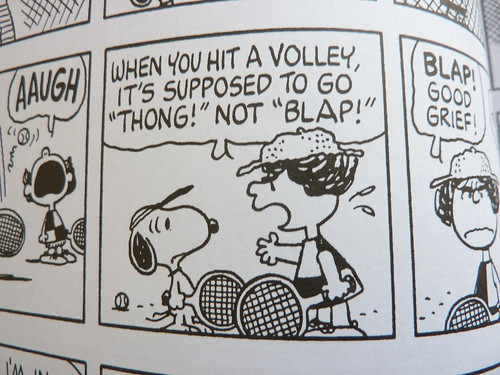 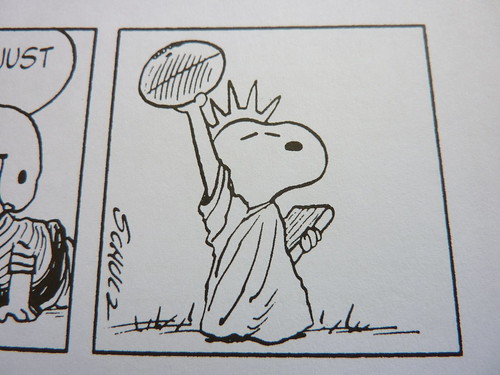 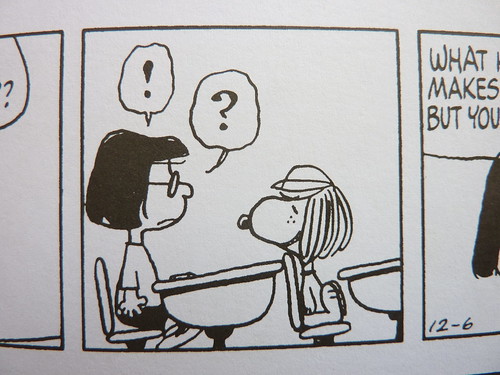 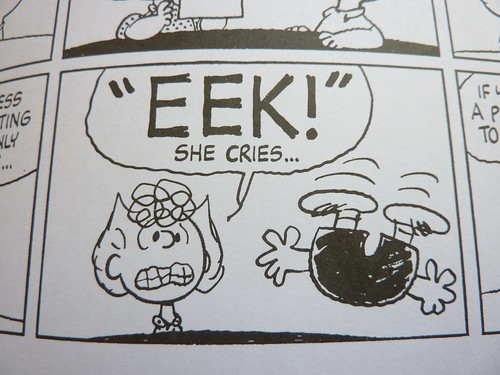 Parka are you gonna review the Art from God of War III by Ballistic?

you are reviewing comics
since when?

@Erika
When it eventually comes out, yes.

@GAD
Once in a blue moon. I review other stuff as well, just not as often as art books.

Check out the cartoons and comics tags. And even graphic design books.