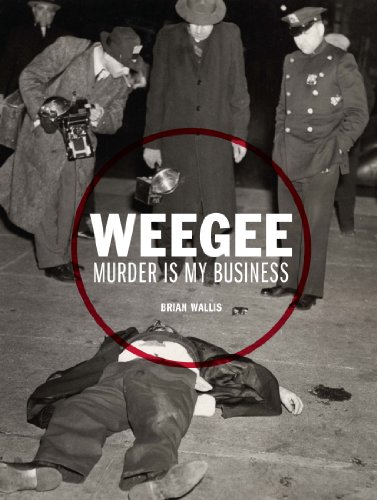 Despite repeating many well known Weegee photos that have appeared in other books (mostly art photo titles) I was fascinated by 'Weegee Murder is my business'. Here his photos are tied into the newspapers, magazines and books that used them and you'll see the photo as Weegee took it and how it appeared in PM, New York Post or Life and True magazines and nicely these reproduction of print pages are readable with a magnifier. The book actually starts with a seven page repro of an article about Weegee in the December 1937 issue of Popular Photography (the pages include nine interesting camera ads, too).

The book's eleven sections are either illustrated essays or photo Dossiers (four of these). I enjoyed Eddy Portnoy's moving essay about Usher Fellig's childhood as an immigrant in New York's Lower East Side and Brian Wallis on Weegee's photo technique capturing crime on the streets. One of the Dossiers covers the Photo League where Weegee had two displays of his work in 1941. Another Dossier: Naked City, over sixty-four pages, looks at photos he took of New Yorkers going about their daily business and this includes eighteen repro pages of PM newspaper and seven spreads from the 1945 Naked City book.

The book was published in conjunction with a 2012 photo exhibition with the same title as the book and the design and printing is excellent (a 300 screen, which why the reproduced newspaper pages are readable). The back pages have a chronology of the photographer and a long listing of all Weegee's photos that appeared in print from 1940 to 1966, this rather amazingly includes the dates and the headline of their use in PM newspaper.

'Murder is my business' a must for all Weegee fans.

https://lh3.googleusercontent.com/-55C401DUKe8/UlrgWTH3BPI/AAAAAAAAY-o/U...
The essential Weegee collection (in my opinion).

Right: the first of seven (readable) pages from a December 1937 article about Weegee in Popular Photography.