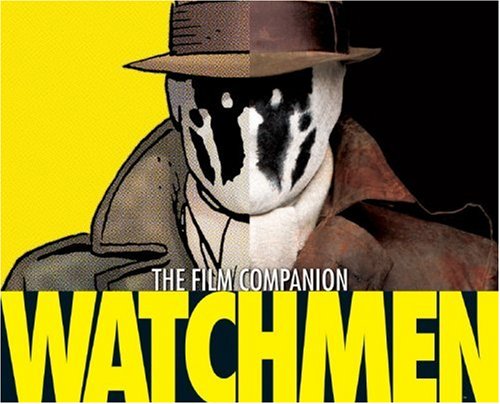 Here's a look at Watchmen: The Film Companion, one of the three tie-in books for the Watchmen movie. The other two being Watchmen: Portraits (Amazon link) and Watchmen: The Art of the Film. The copy I have is a paperback version, but there's a hardcover option as well.

The content in the book is split into six parts, namely, Pre-production, World of Watchmen, The Characters, Production, Post-production, Making Manhattan. The pictures included and mainly film stills and set photos. Some images overlap from Watchmen: The Art of the Film but not to the point I would complain.

The section devoted to character introduction is sizble, and includes the lesser known characters from Minutemen and some villains, oh, and Richard Nixon (no JFK though).

I'm actually more interested in production stories. The production writeup talks about the casting, costumes, sets, filming process, using of computer graphics for special effects, motion capture with Dr Manhattan and other stuff. Interesting bits include knowing that the film was actually short from start to end instead shooting all set-based scenes first.

Overall, I felt the writeup could be more because the movie is 160 minutes. But this is not totally a "making of" book anyway.

For viewers who want to find out more about the Watchmen and the movie, this is the book for you, especially so if you've never read the original graphic novel.

Between this and Watchmen: The Art of the Film, which one would you recommend?

@YazzyDream
If you're not interested in how the movie was made, then you should go for Watchmen: The Art of the Film.

The Watchmen DVD has the movie production part anyway, more on the blu-ray.