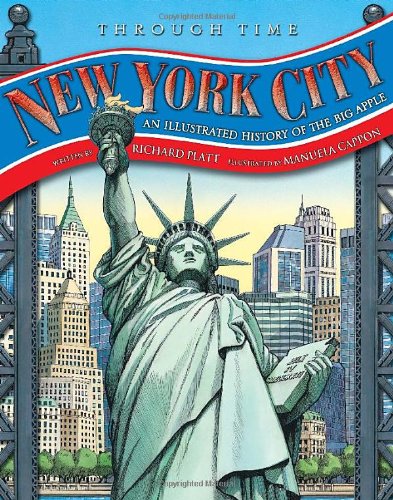 A few years in the life

I thought this would be a useful introduction for my grandson to the world's premier city and it is certainly interesting as far as it goes but I found it had a rather flawed editorial. Each spread takes a particular year in the life of the city and hangs the text and illustrations round the chosen theme. Up to 1906: Ellis Island this makes sense but the remaining seven spreads seem rather arbitrary. 1930: Highs and lows; 1939: World's Fair; 1967 Pop and protest; 1969: Return of the Apollo heroes; 1975; Times Square; 2001: Ground zero and the last one Today: Modern NYC. The subjects for 1967, 1969, and 1975 are hardly momentous events that shaped the city. Where is the Wall Street crash, the subway system, politics and the UN, culture and the Museum of Modern Art? These seem more relevant than some of those in the latter part of the book.

The English author Richard Platt has written similar children's city titles which I assume are in the same format as this one with the main illustrations produced by an Italian studio. I thought these were interesting and quite competent especially those that require a lot of detail work. The pages contain plenty of historical facts presented in caption form or as items arrowed into the illustrations, which are mostly a bird's eye view.

It seems to me the book's format (choosing a particular year) rather dictates the content of the pages and this precludes events in other years that could be of importance in the history of the city but don't get a mention.

The back pages have a four page Glossary followed by an Index.